Best ball advice: The most and least consistent 2018 players based on usage

In our most recent article, I took a look at the 20 most and least consistent players for fantasy football. We determined this by first looking at each player’s scoring output on a week-to-week-basis and then by calculating each player’s coefficient of variation.

Today, I wanted to take the same approach, but focusing instead on the consistency of a player’s role (rather than his production). I suspect this might be even more valuable for fantasy purposes, because it’s more predictive, removing efficiency and touchdown luck from the equation.

(During the season, I write a weekly article — for PFF Edge and Elite subscribers — focusing on this metric and what it means for DFS and your season-long leagues.)

Among all non-quarterbacks to average at least 10.0 expected fantasy points per game, here were the 20 most consistent players (by value of volume/role) last season: 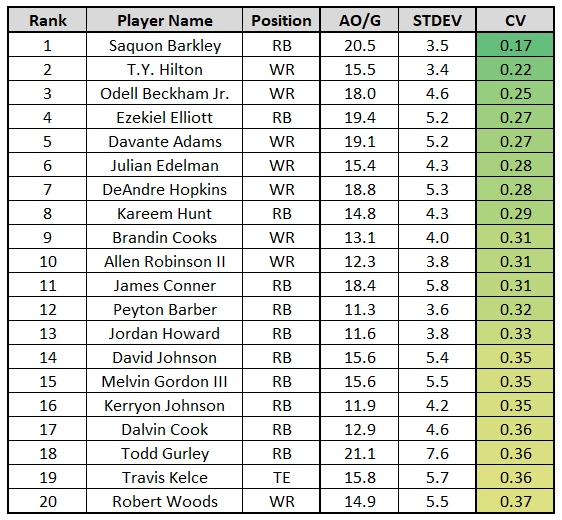 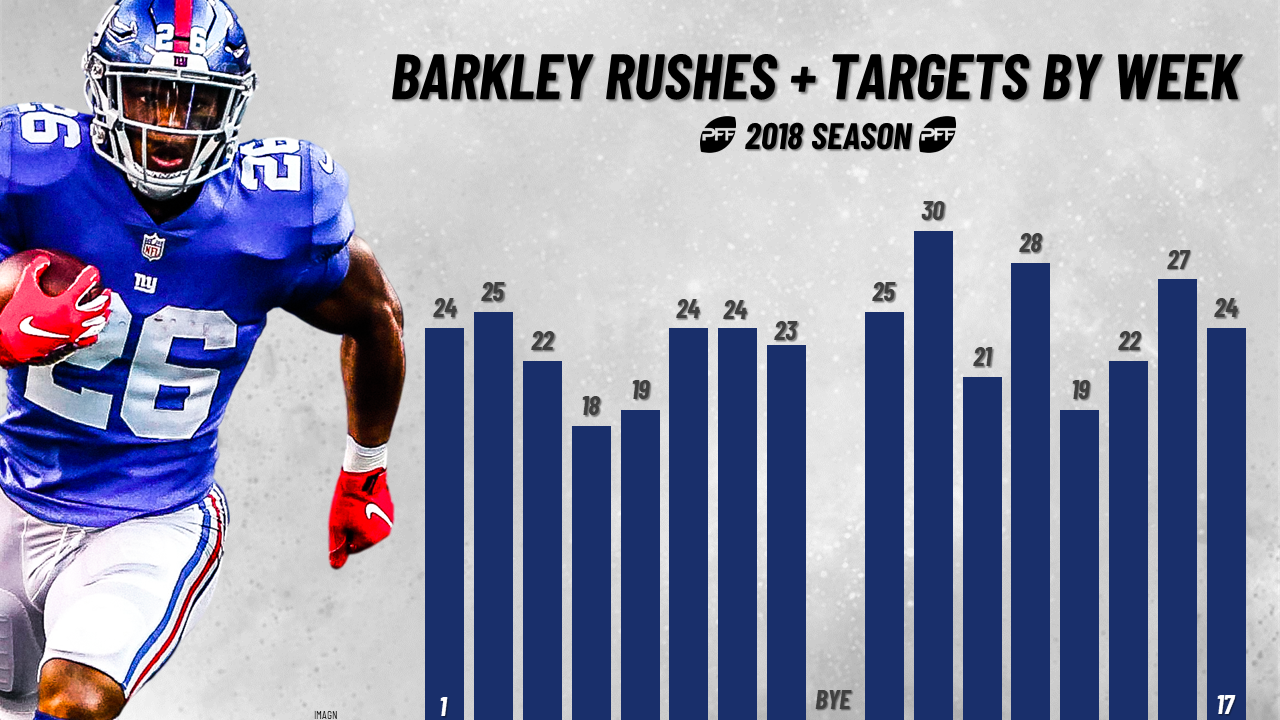 In terms of usage, Barkley was the poster boy of consistency. In 2018, he totaled between 18.5 and 25.0 expected fantasy points in 13 of 16 games. Though New York’s offense may take a step back this year without Odell Beckham Jr., the decrease in scoring opportunities for Barkley should not have a serious impact on his fantasy potential. Barkley totaled 121 targets in 2018, the eighth-most by any running back in any season since targets became a stat (1992). Targets are worth 2.74 times as much as a carry in PPR leagues, and Barkley saw more targets and better overall usage in losses and when New York was trailing.

Hilton, typically one of fantasy’s least consistent scorers, was actually one of our most consistent players by usage in 2018. He saw between eight and 12 targets in nine of 14 games last season. In games he saw fewer than eight targets, he made up for the reduced volume with higher-quality targets (deep targets and/or targets closer to the end zone).

Though Beckham was one of our most consistent players last season, that might not be the case this year now that he’s in Cleveland. Beckham  should benefit from improved efficiency, now catching passes from Baker Mayfield rather than Eli Manning, but there are more mouths to feed in Cleveland, and with such an improved set of surroundings, the Browns might be more run-heavy than we’d otherwise expect. Still, he’ll be well worth a borderline first-round fantasy pick.

Over the past three seasons, Elliott has ranked fourth, first, and first in consistency of usage. When you’re drafting a player top-five, like you would with Elliott, you should expect to be able to start them every week regardless of matchup. While that’s true in general, it’s especially true of Elliott.

Like Adams, Edelman was hyper-consistent in both usage (ranking sixth) and production (ranking first overall). Including the postseason, Edelman averaged 18.3 fantasy points per game after returning from suspension (would have ranked 10th-best), while also reaching at least 16.0 fantasy points in 80% of these games. Given the losses of Rob Gronkowski, Josh Gordon, and Chris Hogan to the New England offense, Edelman looks like a strong value at ADP (WR15) if he can stay healthy.

Cooks isn’t someone you’d expect to be called “consistent,” but that’s exactly what he’s been the past two years, at least in terms of usage. Cooks is inconsistent in terms of production, due to big-play ability, but has ranked top-20 in consistency of usage in each of the past two seasons. With such a consistent workload and because big plays are hard to predict based on matchup, Cooks should be started every week. 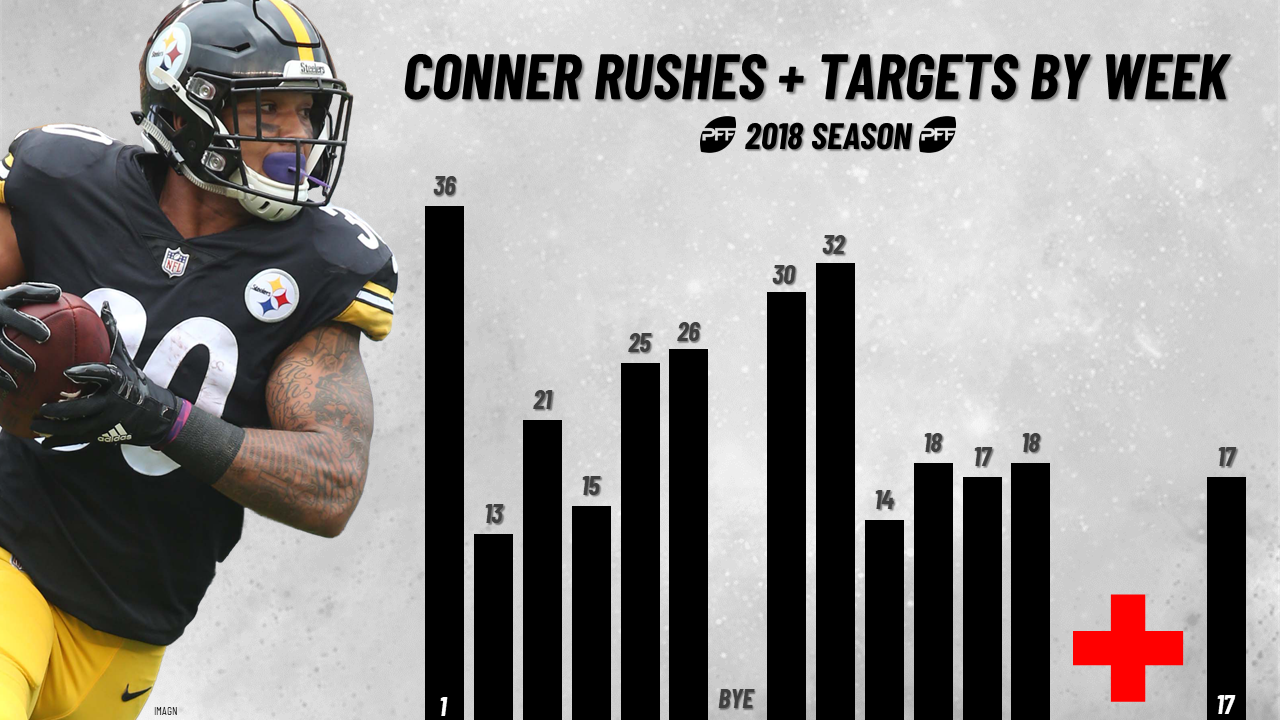 Conner ranks 11th on this chart and Le’Veon Bell ranked second and eighth over the previous two seasons. So long as Pittsburgh continues to forgo a running back by committee approach in lieu of a bell cow (as they’ve done in each of the past six seasons, regardless of Bell’s status), Conner should again be one of the league’s most consistent and productive running backs. As I have have argued, maybe we should be valuing him exactly as we would Bell had he never left Pittsburgh.

Pretty much everything that could possibly go wrong for Johnson did in 2018. Still, he finished the season as a fantasy RB1 and ranked as one of our most consistent players by usage. Most everything that went wrong last year should be resolved this year, making Johnson well worth a mid-first-round fantasy pick.

Johnson’s workload was consistent, but consistently poor (at least relative to his efficiency and production). Last season, Johnson ranked just 21st among running backs in expected fantasy points per game (11.9). Detroit seems committed to using Johnson as part of a committee, capping his upside in 2019.

Gurley ranked as one of our most consistent players both in terms of usage and production. That’s especially impressive considering that six of Los Angeles’ wins came by 14 or more points. Even in blowouts, Gurley remained on the field and saw the best usage of any player, averaging a league-high 21.1 expected fantasy points per game. Following reports of arthritis in his knee, as well as the team’s decision to draft Darrell Henderson (who I love), it’s unlikely Gurley’s usage will be as good or as consistent as it was in 2018.

Kelce’s position-leading marks of consistency are just another reason why he’s deserving of a first-round pick in 2019 fantasy drafts. 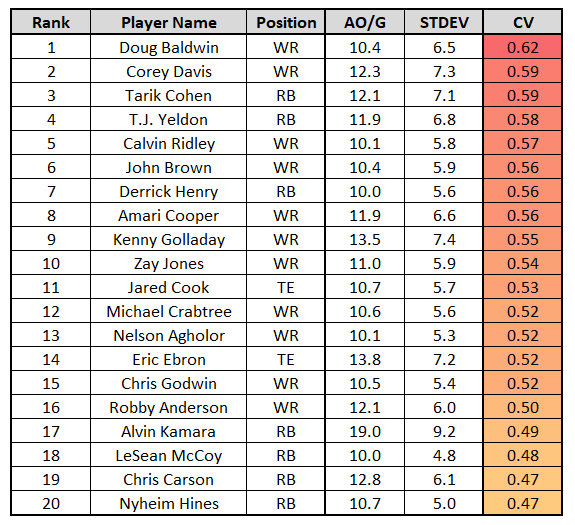 Without spending too much time here, as we already addressed a number of the league’s most inconsistent players in our last article, I did want to note an interesting takeaway from last year’s article on consistency of usage. The majority of the players who ranked highly on this chart last year are all but undraftable this season, perhaps implying these players are ones to avoid (and not just because their lack of a consistent workload makes them less valuable in typical start/sit redraft leagues.)