There’s lots of talk about team-building in fantasy football, particularly in auction drafts. Stars and Scrubs, balanced roster, heavier at some position than another, etc.

We talk about it far less from a real-NFL roster, but it happens there too. Every team had at least one fantasy-relevant option last year — 26 of 32 teams had at least one player finish top-12 at his position, 29 had at least one player in the top 15 (Baltimore, Cleveland, and Denver were the exceptions, and Alex Collins, Duke Johnson, and C.J. Anderson and Demaryius Thomas certainly were relevant) — and obviously, the better teams had better options … to a point. Some teams trail off.

For example, the Patriots finished second in total points scored in 2017. And their fantasy production reflected that around the roster—their 10th-best fantasy option, Chris Hogan, still totaled 76 fantasy points. Meanwhile, the Saints finished fourth in points scored, only 10 points behind the Patriots, but their 10th-best fantasy option, Tommylee Lewis, only had 19 fantasy points. The Patriots featured insane balance; the Saints were stars-and-scrubs.

So I looked at the numbers around the league, and averaged the top 10 standard fantasy totals for each roster. Here’s the chart: 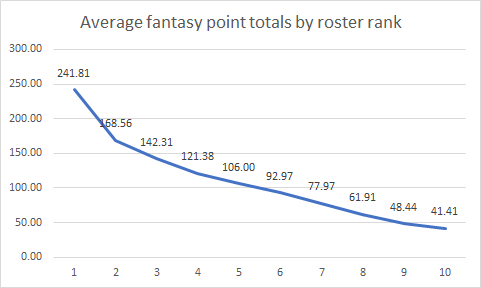 Clearly, it’s a steep drop-off that tapers off as we get lower. That’s no surprise. Below, I’ll go division-by-division compared to the average to find out which rosters are stars-and-scrubs, which are balanced, and what that means. 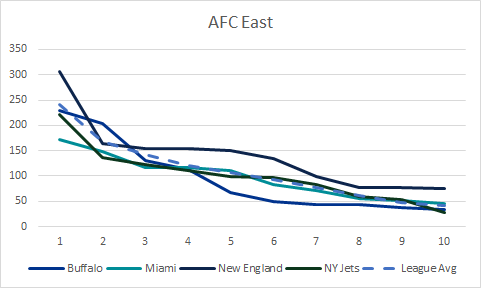 One of the virtues of the Patriots being such a balanced roster is the top skill players don’t actually blow things out of the water. After Tom Brady (at the top of the graph there, New England’s No. 2 option, Dion Lewis, actually dipped below the average before the rest of the roster stayed high — the Patriots were 12th or better around the league at every ranking spot, and No. 1 at both ninth and 10th, so by this measure they were the league’s most balanced fantasy attack.

The Jets and Dolphins bounced around from below-average to worse. Meanwhile, the Bills started out poorly, with their top fantasy option only 17th-best, and tailed off from there. 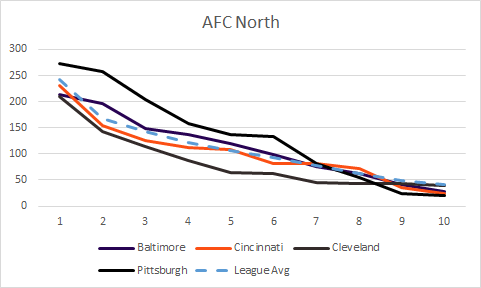 The Steelers demonstrate a top-heavy roster, dominating the field and the league average through seven roster spots before plummeting down to one of the bottom spots around ninth and 10th. (The Steelers’ 10th-best fantasy option, Eli Rogers, had only 149 yards all season.)

Meanwhile, the Browns were deep and absolutely not top-heavy. The Browns had the 25th-best ranking spot for first and third through eighth, then suddenly had the 16th-best No. 10 option. Balance is easier to achieve when there’s no high end to have to keep up with. 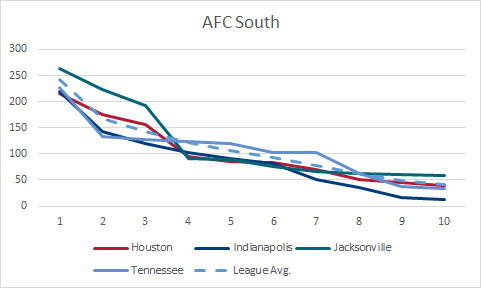 The Titans level off hard, with only 31 fantasy points separating their second-best player (DeMarco Murray) from their seventh (Rishard Matthews). As a result, they have the 28th-best No. 2 option, but the fourth-best No. 7, and their line on the graph is just about a straight line.

The Jaguars, meanwhile, were among the top-heaviest teams in the league, with the team defense, Blake Bortles, and Leonard Fournette sitting near the top of the graph. The Jags’ No. 3 fantasy option was the third-best around the league; their No. 4 option was 30th. The lesson there is that, while the Jags were a surprise team league-wide, they didn’t have any fantasy depth and basically offered only Fournette and the defense. 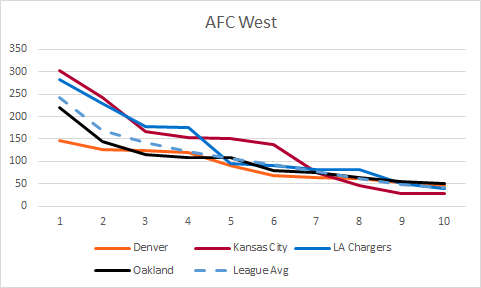 Almost every team has that cliff it falls off of, where the roster goes from “fantasy-relevant contributors” to “also football players.” For the Chiefs, it came after six roster spots — Alex Smith, Kareem Hunt, Tyreek Hill, Travis Kelce, Harrison Butker, and the defense. The Chiefs had the single best No. 6 option on the roster, the 19th-best No. 7, and 27th or worse at 8, 9, and 10.

The Chargers weren’t even that deep. Keenan Allen was the third-best fantasy receiver in 2017, but somehow only had the fourth­-most fantasy points on the roster. And then there was the cliff, with a 79-point falloff from Allen to the team’s fifth-best contributor, Tyrell Williams. 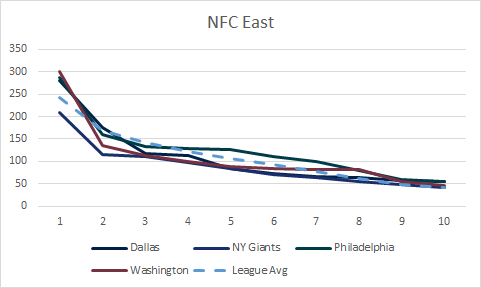 Giants aside, the NFC East teams were all: Well above-average quarterbacks at the top of the roster, and then roughly average rosters the rest of the way down. The Eagles manage among the league’s most balanced rosters, with the fourth-best No. 10 option (Trey Burton), but otherwise, there’s really nothing remarkable about the NFC East in this study. 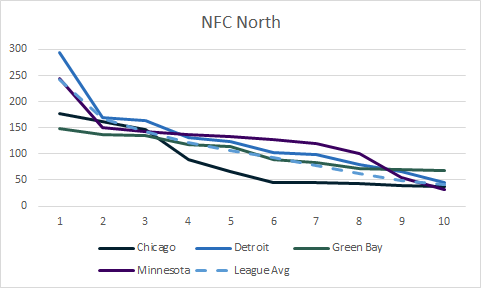 The Packers had easily the smallest gap from No. 1 to 10 across the league, with their best fantasy option (Davante Adams) only outscoring their 10th-best (Ty Montgomery) by 80 fantasy points. As a result, their line on the graph is basically the flattest in the league (we’ll get to the team with the widest margin later).

Meanwhile, the Vikings had eight different contributors top 100 fantasy points, including Case Keenum, Kai Forbath, the defense, Adam Thielen, Stefon Diggs, Latavius Murray, Jerick McKinnon, and Kyle Rudolph, the only team in the league with eight such entrants on the list. It was a pretty precipitous fall from eighth to 10th, but through the first eight slots, the Vikings were the deepest roster in the game. 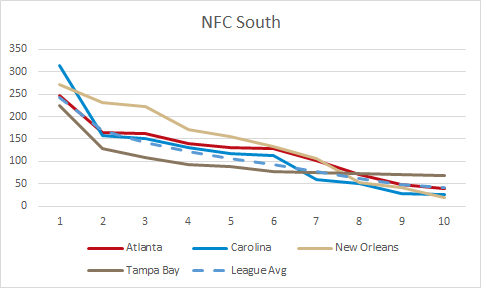 Look at those Saints. Super top-heavy, the Saints (with Drew Brees, Alvin Kamara, Mark Ingram, and Michael Thomas) fly far above the league average for a while, then plummet down to Tommylee Lewis there at 10th — only the Colts and Kamar Aiken had a worse 10th-place contributor. 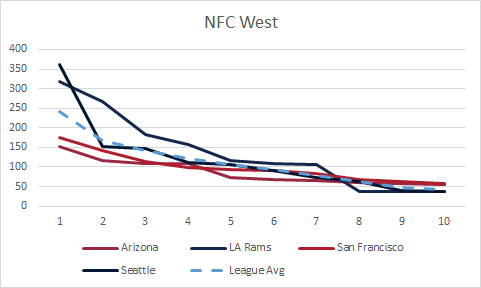 The Seahawks had the aforementioned biggest gap from best fantasy player (Russell Wilson) to 10th (Mike Davis), a gap of 324 fantasy points. In fact, the Seahawks’ gap from first to 10th is more than any player in the league other than Wilson actually scored. Of course, the Seahawks’ cliff comes right after Wilson — he was the top-scoring fantasy option in the league, but the team’s second-best fantasy option (the defense) was only 18th-best, and nowhere else 2-10 rises above 14th.

What can we learn?

Maybe it’s obvious, but as noted at the top, raw point totals might help you assume team-wide fantasy production, but they only go so far toward predicting how deep a team is. All too often, we assume a Green Bay receiver is going to be productive just by virtue of being a Green Bay receiver, or the Jaguars must have plenty of fantasy options because they scored 417 points, but it takes more than that to figure out fantasy productivity.

Obviously, these numbers are based on 2017 productivity, and rosters experience all sorts of change from one year to the next. But absent some strong reason to assume major overhaul (for example, there's every chance to think the Browns will be more productive at the top next year), these numbers can tell you some things about your mid- to late-round picks. Tre'Quan Smith enters the year as the Saints' sixth or seventh receiving option; the same player for the Patriots is (roughly) Malcolm Mitchell or Braxton Berrios. But as the above shows, the seventh-ish option on New England is liable to be far more productive than the same on the Saints. Deep leagues, late-round fliers? Pay attention to teamwide productivity trends.