Despite the title of this article, it’s never too early to dig into ADP trends for the coming season and leverage PFF's fantasy rankings. There are months to go before we get into the thick of seasonal drafting and DFS analysis, but dynasty drafts and early offseason best ball leagues are already up and running.

In this analysis, I’m leveraging the individual draft data I’ve collected from FFPC best-ball leagues that started already this offseason (yes, there have been quite a few) and the hundreds played last year. The data reveal some significant trends and themes this season that, if identified early, could be the key to being ahead of the curve.

In a continuation of last year’s trend, early offseason drafters want nothing to do with wide receivers in the first round this season. Some of this is an indictment of the quality of early wide receivers following severe drop-offs in performance from former fantasy stalwarts like Julio Jones, Antonio Brown and Odell Beckham Jr. But mostly it is a race to secure more than one solid running back starter, with reliable options all but gone outside of the first 10 available.

Putting the average ADPs for top WRs side-by-side from this month and last February shows that most of the positional slots have fallen three to five spots, replaced by ascending running backs.

The inflection point for wide receivers becoming most valued versus the previous season occurs around the end of the fourth round, or the range of WR 16. At that point, there aren’t any viable running back starters left.

Eventually there will be value in being contrarian and locking in top wide receivers like Stefon Diggs and DeAndre Hopkins, who can often be had in the mid-second round. The problem is that you could have argued the same last offseason, and you would have been at least a year early.

In a deep wide receiver class, four prospects were taken in the first round. Justin Jefferson and CeeDee Lamb had strong rookie campaigns and are now being drafted as the WR6 and WR17 in best ball leagues. Drafters are avoiding the other three former first-round picks. 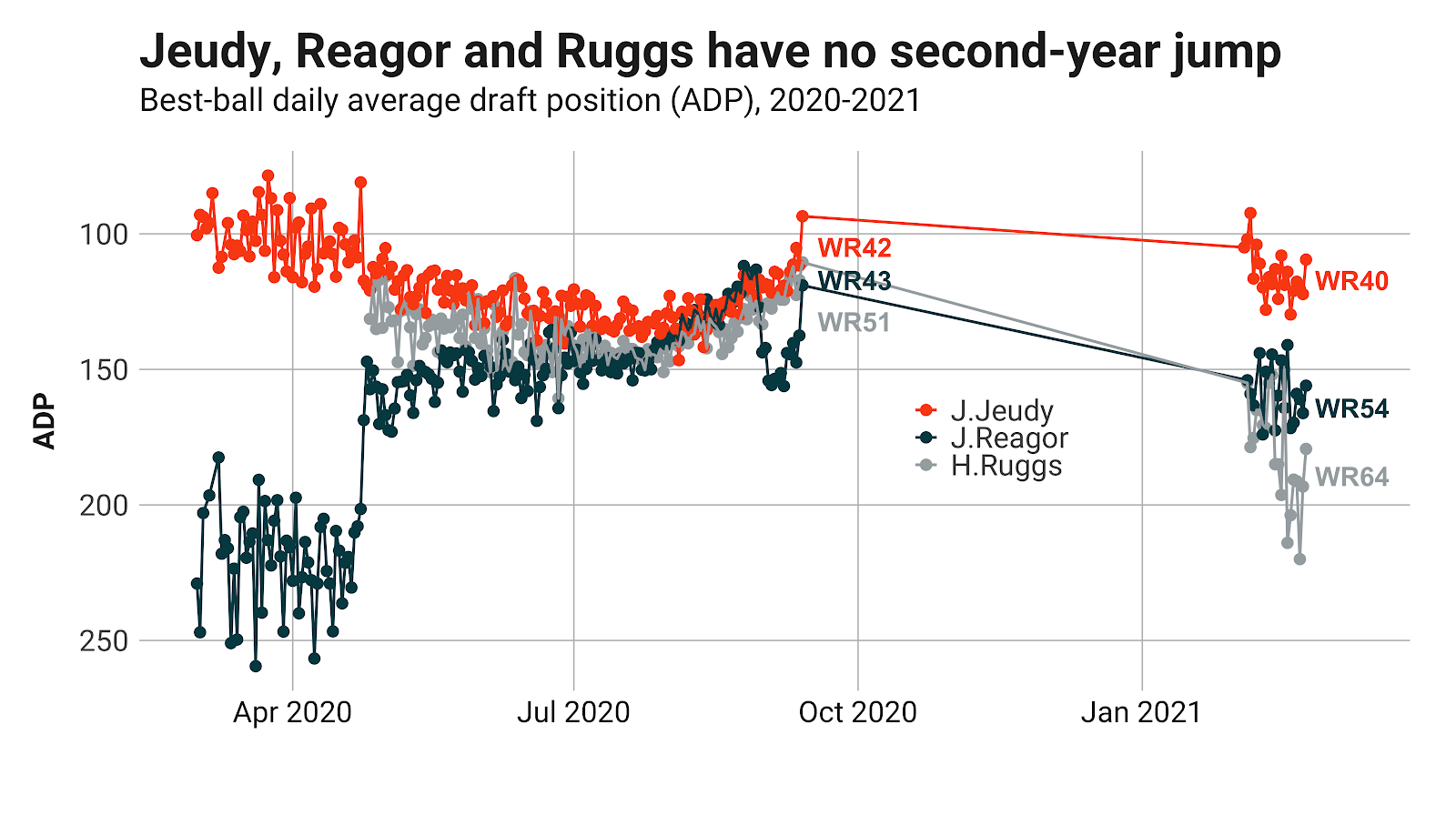 Jerry Jeudy, Jalen Reagor and Henry Ruggs were the first, second and fourth wide receivers taken, and now their ADPs have all fallen from where they were being taken immediately post-draft. While there’s definitely predictive value in how a wide receiver performs as a rookie, fantasy players at the position typically break out in their second seasons. There’s little about the respective situations and evaluations for these three that should have dramatically changed over the course of the year, with an understanding that rookies can struggle.

The lack of ADP gain for Jeudy is particularly confounding. Jeudy was seen by many as the best prospect of the 2020 class and accumulated 850 receiving yards and three touchdowns as a rookie with sub-par quarterback play. Jeudy looks very much like a prototype to bet on breaking out in his second season, yet he can be had at only a small investment around WR40.

A seminal analysis in fantasy football history was Coleman Kelly making the case for drafting Alshon Jeffery entering his second season ahead of trendy rookie DeAndre Hopkins, calling the enthusiasm for the latter as a product of rookie derangement syndrome.

In short, the rookie derangement syndrome is overvaluing rookie in comparison to veteran wide receivers, especially those entering their second seasons. We pointed to three potentially undervalued second-year receivers above, but there are also veterans with more experience that are being overlooked in the same ADP range as the top rookies.

There will sometimes be dominant rookie seasons, like Jefferson last year or Beckham six years before. But those are the exceptions. Rookies like Ja’Marr Chase and DeVonta Smith are currently being drafted ahead of established top fantasy options like Courtland Sutton, Will Fuller and Robby Anderson. Any rookie would be lucky to have the type of season that Fuller and Anderson had last year or that Sutton did his last full season.

I’ll be the first to tout Chase or Smith next offseason if either falters as a rookie. But this year you're buying a high-end projection without any NFL evidence to back that assessment.

There is a lot of focus this time of year on which players might leave in free agency, but equally important is analyzing the effect of those potentially left behind. The 2021 free agent wide receiver class includes a number of top wide receivers, meaning a lot of receiving volume could shift around if they don’t re-sign with their existing teams.

The table below lists the most likely beneficiary from a departing free agent teammate, along with his position ADP this season and 2020 finish in PPR points per game. You’ll see that most are priced either close to or below their actual production last season, meaning they’ll likely rise with the announcement of a teammate departure but won't have much room to fall if the situation doesn’t change.

These are the types of players with asymmetric risk — more upside than downside — that most benefit early offseason drafters who can reasonably assess how workloads will shake out well in advance of their competition. Some at the end of the list, like Quintez Cephus and Adam Humphries, are more speculative, but they also have minimum cost.