We’ll offer up a fantasy value, bust, and sleeper along with some rookies to know and dynasty quick takes for each team. In this edition, we examine the AFC North. 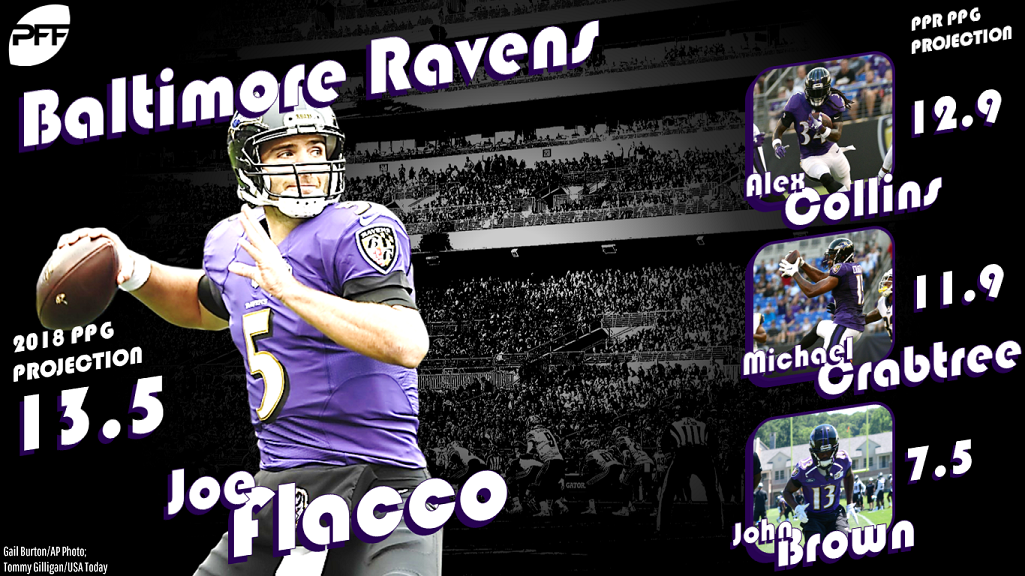 The Ravens were a surprising ninth in the NFL in scoring last season. Much of that came during the second half of the season when their points-per-game averaged increased by seven points. Nearly every wide receiver and tight end on the roster is new, but it likely won’t make a big enough difference to put Joe Flacco on the fantasy radar. The Ravens will once again lean on its running game led by Alex Collins and the play of its highly-touted defense.

Best fantasy value: Alex Collins, RB — One of fantasy football’s biggest surprises a year, Collins averaged 65 rushing yards per game with six touchdowns over the final 13 games and seems like a safe bet to return RB2 value in the middle of the fourth round.

Fantasy bust: Michael Crabtree, WR — The 31-year-old is very touchdown-dependent and statistically inefficient. He could see a fair number of red-zone targets this year, but in his draft tier the ceiling is too low to deliver the ROI owners seek.

Sleeper to watch: John Brown, WR — Brown’s ADP soared rapidly as August came to an end. If he can shake the leg muscle injuries that have plagued him the past two seasons, the downfield threat may get into the weekly lineup conversation, especially in non-PPR formats.

Rookie(s) to know: Hayden Hurst and Mark Andrews, TEs — The Ravens drafted a pair of tight ends in the first and third round this year who both have positive long-term outlooks. Hurst is the early favorite to be the better fantasy commodity of the two.

Best current player for their 2020 roster: Lamar Jackson, QB — Jackson will need time to develop, but his dual-threat ability could be put into the mix on special packages right away. He ran for 3,172 yards and 39 touchdowns in his final two years at Louisville. 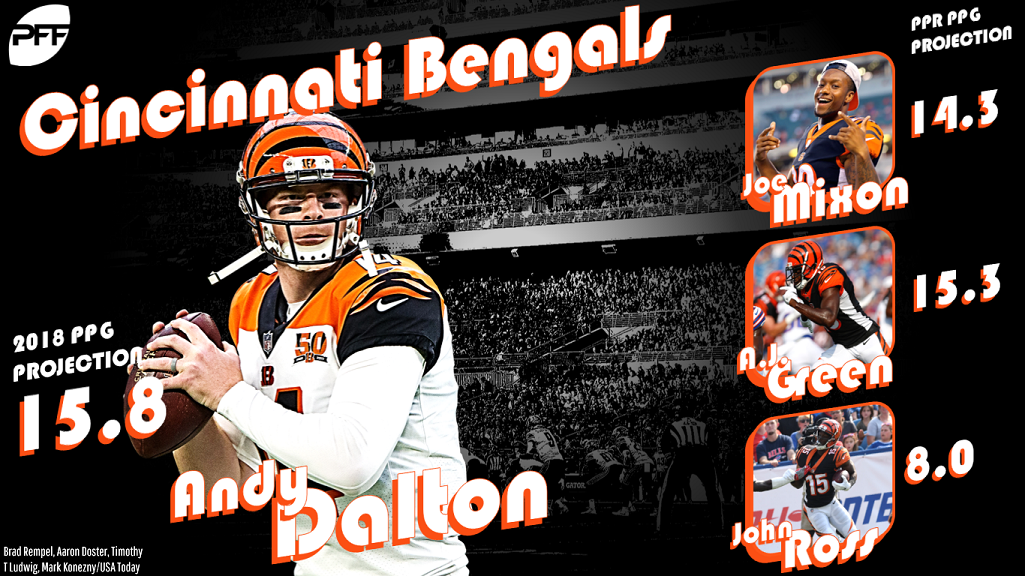 The Bengals brought back Marvin Lewis — despite the fact the team hasn’t won a playoff game in his 15 seasons as the head coach — and Lewis opted to retain Bill Lazor as the offensive coordinator. Cincinnati had its worst rushing season in franchise history a year ago and made numerous moves this offseason to upgrade one of the league’s weakest offensive lines. Andy Dalton and A.J. Green bring some proven veteran experience, and they’ll be surrounded by some talented young skill players which could lead to this offense putting up some surprising production.

Best fantasy value: Giovani Bernard, RB — Bernard will play more than most team’s No. 2 running backs because of his versatility and ability to make big plays which gives him standalone value. If Joe Mixon were to go down, Bernard would be a RB2.

Fantasy bust: Tyler Eifert, TE — The price has dropped so much on Eifert due to his injury history that drafting him doesn’t come with much risk, but he missed 40 of his last 64 contests with myriad injuries so don’t count on him too heavily.

Sleeper to watch: John Ross, WR — When the Bengals cut veteran wide receiver Brandon LaFell, Ross cemented his starting role opposite Green. With his speed (record 4.22-second 40 at combine) and elusiveness, there are some big plays ahead.

Rookie(s) to know: Billy Price, C — No rookie is more important to the success of the offense than Price, who has an impressive 85.5 pass-blocking PFF grade this preseason. If his run-blocking can improve, big things are ahead for the center.

Best current player for their 2020 roster: Joe Mixon, RB — Mixon was the youngest running back in the league a year ago and showed flashes of greatness, but he still needs to play with more consistency and poise. He has top-five upside looking out for a few seasons. 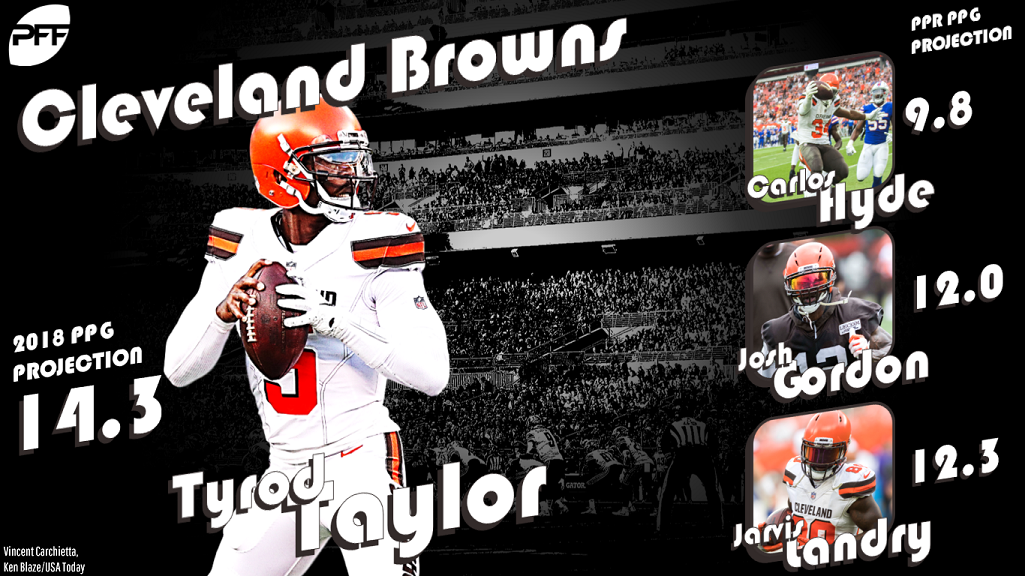 The Browns have gone 1-31 over the past two seasons, yet there is a ton of optimism around the fantasy outlook of many of the team’s offensive players. They drafted quarterback Baker Mayfield with the No. 1 overall pick and brought in Tyrod Taylor to bridge the gap until they deem Mayfield ready to start. Josh Gordon finally appears ready for a return to action after missing most of the past four seasons and brings a ton of upside. Cleveland made a big free-agent splash by signing wide receiver Jarvis Landry, who averaged 100 receptions per year in his first four seasons with the Dolphins.

Best fantasy values: Carlos Hyde and Duke Johnson, RBs — Hyde has emerged as the leader for early-down carries to start the year after a strong preseason and Johnson remains viable in PPR formats with his expected volume of targets even with the addition of Landry.

Fantasy bust: Nick Chubb, RB — The Browns didn’t give Chubb many reps with the first teamers as the preseason wore on and he’s really never looked the same since his knee injury in 2015. Owners should proceed with caution on the rookie.

Sleeper to watch: David Njoku, TE — He reeled in 32 of his 58 targets for 386 yards and four touchdowns as a rookie and definitely showed progress as the year wore on. Njoku graded out as PFF’s 10th-best receiving tight end in 2017.

Rookie(s) to know: Antonio Callaway, WR — Off-the-field issues allowed Callaway’s NFL draft stock to drop, but the talent cannot be denied. He is slated to be the Browns’ No. 3 wideout entering 2018 and could be a big contributor at some point this year.

Best current player for their 2020 roster: Baker Mayfield, QB — Many didn’t have Mayfield atop their draft boards, but the Browns did and there’s no doubt he will get the next few years to run this offense. An aggressive, downfield thrower, Mayfield also possesses some decent mobility which could lead to decent fantasy production in due time. 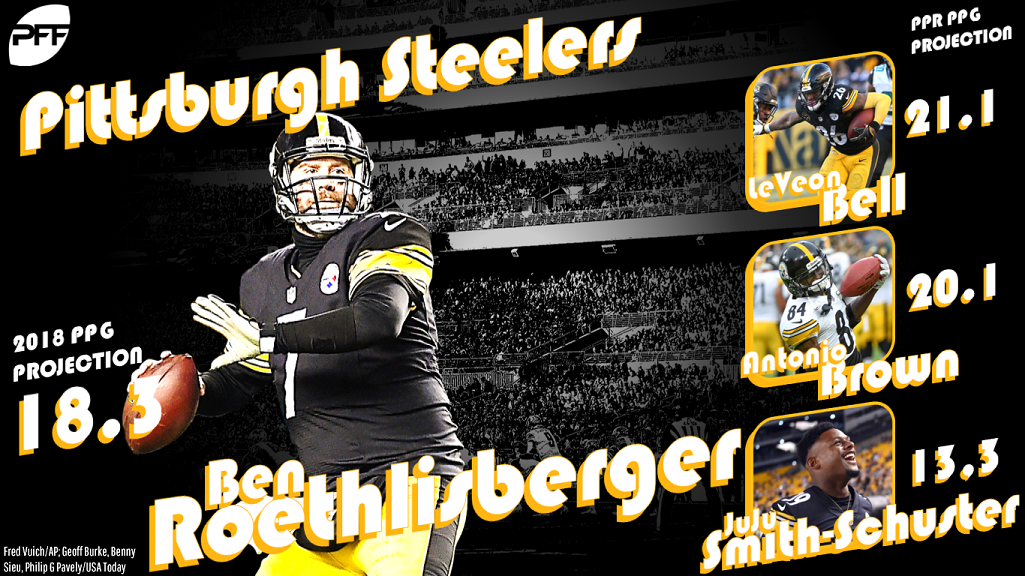 Longtime Steelers assistant Randy Fichtner was elevated to offensive coordinator after the Steelers fired Todd Haley, and that could have an impact. Regardless, the offense will continue to center around RB Le’Veon Bell and WR Antonio Brown. Brown has been the PPR WR1 four years and counting and Bell broke 1,850 total yards for the third time in four years in 2017 and saw a career-high in targets (103) and receptions (85). Those two both could be top-five fantasy picks. It is a bit more perplexing, though, when considering the fantasy outlook of the rest of the offensive pieces in Pittsburgh.

Best fantasy value: Ben Roethlisberger, QB — Big Ben is going to be an appealing option for those who wait on drafting a quarterback after he finished as a top-10 QB with 300 passing yards and/or multiple TD passes in 13 of his 17 contests last season.

Fantasy bust: James Conner, RB — Conner is being overdrafted as his skillset isn’t anything special and that makes him a very weak candidate to produce much of a fantasy output without the benefit of an injury.

Sleeper to watch: Vance McDonald, TE — The tight end flashed late in season after arriving in Pittsburgh, including a pair of four-catch games and he pulled in 10 balls for 112 yards in a postseason loss to Jacksonville.

Rookie(s) to know: James Washington, WR, and Jaylen Samuels, RB — Pittsburgh always seems to pluck some young talent that offers fantasy upside and Washington and Samuels fit the bill and could see small roles right out of the gate.

Best current player for their 2020 roster: JuJu Smith-Schuster, WR — The wideout had a remarkable rookie campaign and is still just 21 years old entering 2018. Over the final eight games last season he caught 43 balls for 725 yards and scored six touchdowns.