2022 NFL Draft: Agree or disagree with the latest risers and fallers

NFL draft stock fluctuation season is in full swing as we look ahead to the 2022 NFL Scouting Combine after finishing up the senior all-star bowls. Some have started to tank while some players are skyrocketing.

Occasionally, these moves in a prospect’s stock aren’t justified. Below are some of the recent notable movers in the 2022 NFL Draft along with a statement regarding whether I agree or disagree with the movement.

No quarterback earned a higher grade during Senior Bowl practices than Willis. He was one of the biggest winners of the week, regardless of position, and is now in the QB1 conversation.

Willis’ physical tools are off the charts. The Liberty product is the most dangerous quarterback in college football from an athleticism perspective, and he possesses outstanding arm strength. Willis recorded an 11% big-time throw rate and 94.5 rushing grade this season — both of which lead all FBS quarterbacks by a substantial margin. He is still raw and going to be a bit of a project, but his ceiling is higher than anyone else in this class. 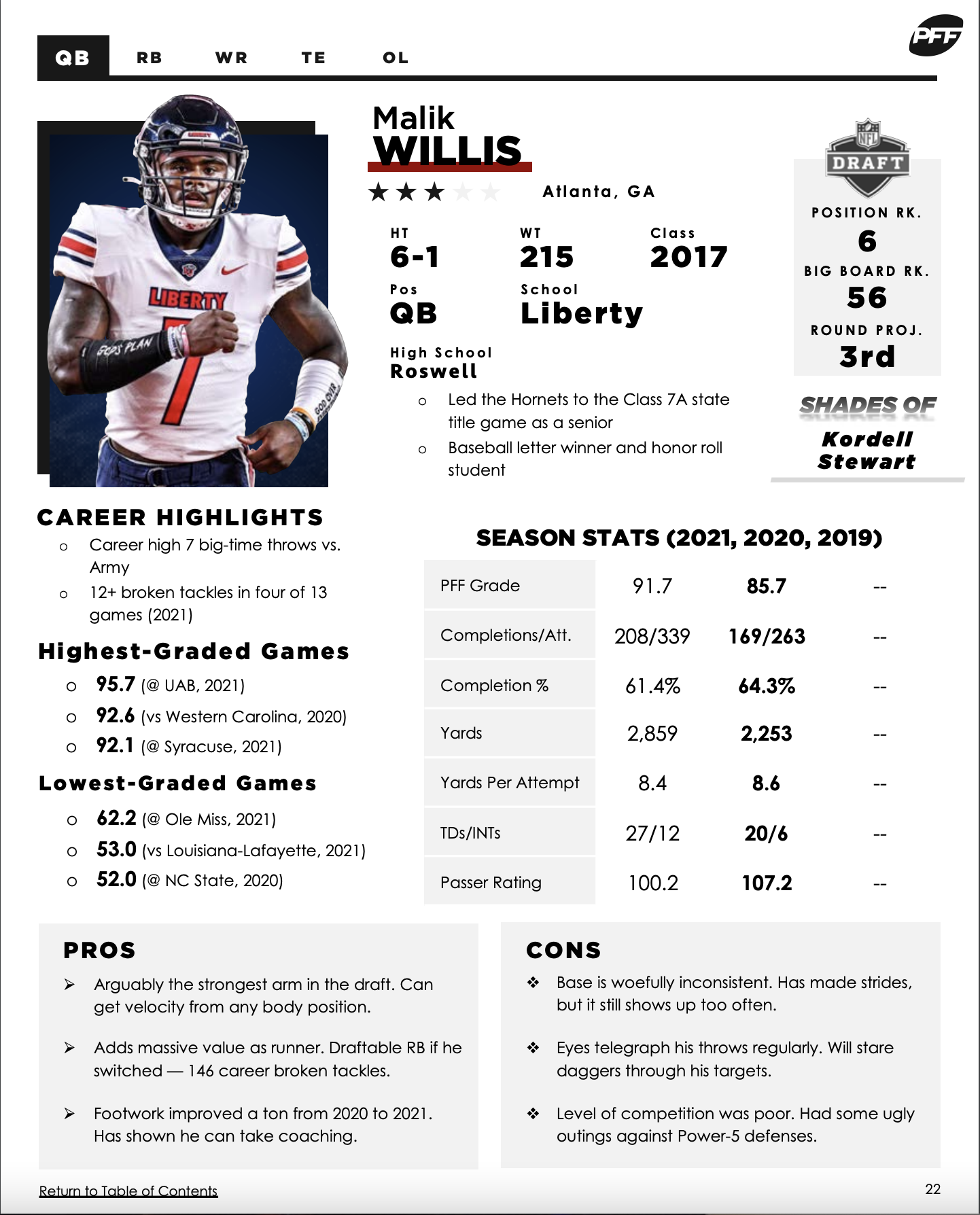 Johnson was so dominant during one-on-ones over the first two days of Senior Bowl practice that he didn’t even need to partake in the third and final day. He won six of his eight one-on-one reps and had caused the crowd around him to widen their eyes several times.

The 6-foot-4, 259-pound edge defender helped himself move from a top-50 pick to most likely a first-rounder. He may not be the most athletic player at the position in the class, but he’s long (34 3/8-inch arms), can play low and is a polished player. Johnson earned an 81.1 PFF grade in 2021 at Florida State — his first year starting at the collegiate level — after transferring in from Georgia.

Ojabo has a wild background. The 6-foot-5, 240-pound edge defender grew up in Scotland, where he played soccer and basketball, before moving to the United States and becoming a track and basketball star. He didn't pick up football until his junior year of high school after the Rutgers head football coach called him and told him to do so. Ojabo did, and he received 35 offers after his first season while learning alongside former Penn State Nittany Lion and now Baltimore Raven Odafe Oweh. Ojabo ended up at Michigan and hardly played in his first two years, but he earned a featured role in the Wolverines’ defense for their 2021 Big Ten Championship season.

Ojabo is an extraordinary athlete who definitely flashed top-tier talent, as he produced multiple elite pass-rush grades above 90.0. At the same time, his production was rather inconsistent, and his run defense is a big issue.

Ojabo earned a PFF grade below 61.0 in each of his last four games. Earning an 87.0 pass-rush grade his first year on the field despite not being a polished product is impressive but is it worthy of a top-10 pick? That’s where Ojabo has been trending as of late, whereas the back of the first round is where I would want to take a swing on him.

Johnson was one of the most consistent guards in college football last season. He earned an 80.0-plus grade as both a pass- and run-blocker, and he recorded just one penalty en route to honorable mention PFF All-American honors.

As lead draft analyst Mike Renner highlighted in the 2022 PFF Draft Guide, there are a few cons to his game. He’s a polished and stout performer, which showed at the Senior Bowl. Johnson split his one-on-one reps but didn’t lose any pass-blocking snaps in team drills and the game. Now, he’s looking like a first-round pick, and deservingly so.

Any team taking Walker in the middle of Round 1 is ignoring his collegiate production and hoping it can craft his tools into an impact NFL defensive lineman. The 6-foot-5, 275-pound Georgia Bulldog is an exceptional athlete, but he has never been able to put his physical gifts into action. He earned a 65.8 pass-rush grade in 2021 and has never earned a single-game pass-rush grade above 80.0. Considering that production, I think Round 1, in general, is far too rich, let alone somewhere in the ‘teens.

Thibodeaux has steadily moved from being the likely No. 1 overall pick to barely a top-10 prospect. While Michigan’s Aidan Hutchinson deservingly won over scouts and is likely to be the top selection and first edge defender off the board come April, Thibodeaux shouldn’t slide any farther than second overall. Despite not being a polished player quite yet, the Oregon product still posted an elite 91.5 pass-rush grade for the 2021 season. And he did that while his outing against Colorado was a throwaway game, as the Buffs completely schemed around Thibodeaux, removing any kind of impact he could have had on the game.

He is Michelangelo's David of pass-rushers. The 6-foot-5, 258-pound edge defender has every trait that NFL teams want on the edge. Don’t overthink this one — Thibodeaux is a special prospect.

Stingley has slid from a generational top-three pick to potentially the back half of the first round. Despite one of the best true freshman seasons of the last decade in 2019, injuries and good-not-great play from the last couple of years are starting to give some pause on Stingley’s college-to-pro projection. However, there should be no reason for concern.

For starters, Stingley is in the conversation for the best all-around athlete in this class. At “The Opening” event in high school, the 6-foot-1, 195-pound corner posted a 4.3-second 40-yard dash and 42.0-inch vertical. His rare traits showed up consistently on the field.

Back in 2019, Stingley posted a 91.7 PFF grade while allowing a 38% catch rate combined with 21 interceptions plus pass breakups. Stingley was limited to only 289 coverage snaps over the last two seasons due to injuries, but he still allowed just 0.57 yards per coverage snap in press coverage and earned a 72.7 coverage grade overall. If Stingley slides out of the top five, it’s a steal in my eyes.

Elam dominated so much as an underclassman — earning 89.8 and 81.0 coverage grades as a true freshman and sophomore in 2019 and 2020 — that opposing offenses largely avoided him in 2021. This year, Elam was targeted three or fewer times in over half of his games played. His PFF grade, however, left a lot to be desired (61.8). Seven penalties committed were a big part of that and speaks volumes about how overly physical he can get. Elam’s game may take some time to translate to the NFL level, but he has the traits to be a quality press-man corner.

Linderbaum has been mocked by several prominent draft experts at the end of Round 1 in recent weeks after being considered a consensus top-10 prospect before. This all has to do with positional value, and that reasoning is pretty interesting because the center position is nearly identical to offensive tackle in positional value, according to PFF WAR. Linderbaum’s ceiling would also place him in the top tier of the position, which also would make him a top-10 offensive lineman overall. Of the 10 most valuable offensive linemen of 2021 in the NFL, three played center.

The Iowa star posted a top-five grade among centers nationally in 2019 and was the highest-graded player at the position in 2020 before making history in 2021. He closed out his fourth and final year as a Hawkeye producing the highest single-season PFF grade from a center (95.4) in the PFF College era. His movement skills are truly special. Linderbaum is a safe prospect and should go in the top 10 of the 2022 NFL Draft.

Karlaftis was widely viewed as a top-10 pick but is now projected by many to fall in the back half of the first round. I personally think if the latter occurs, a team will be getting a massive steal.

He is one of the most powerful defensive ends in the country, and he pairs that strength with some of the best hand usage in the class and an explosive get-off that makes life tough on opposing offensive tackles. The 6-foot-4, 275-pound Boilermaker showed a lot of promise as an underclassman and maximized his full potential as a true junior, as evidenced by his 90.6 pass-rush grade this season.

He’s a top-eight player on the PFF Big Board, and I would happily take college football’s “Greek Freak” within the first quarter of the first round.