The comps below were derived from a two-step process. First, I converted all the most statistically relevant stats and measurables to percentiles based on the thousands of prospects who have entered the NFL since 2006 at each position. Then, I filtered the total universe of past prospects by those who had draft positions, weight and 40 times within a 10th percentile in either direction of Alabama WR Jaylen Waddle. For undrafted players, I assigned a numerical draft position of 300.

For Waddle's draft position, I’m using an estimate based on the mock data collected at GrindingTheMocks.com. For the weight and 40 time, I’m using the numbers from his pro day, with a 0.03-second penalty added to the 40 time to reflect the uncertainty of pro-day timed measurements.

Waddle’s comps aren't the most impressive bunch for a couple of reasons. First, the Alabama wideout doesn’t have eye-popping production numbers. He started strong as a true freshman, recording 848 receiving yards and seven touchdowns, translating to an 18% market share of yards and 14% of touchdowns. He slipped back in his sophomore year, with 13% market shares in yards and touchdowns while being overshadowed by DeVonta Smith, Jerry Jeudy and Henry Ruggs III.

Waddle was a year behind the others and the only one of the top four Alabama receivers who wasn’t draft-eligible in 2019, which could partly explain why he wasn’t prioritized in the offense. It’s also important to consider the unprecedented nature of playing alongside four future first-round wide receivers in the same offense.

Waddle finally broke out as a junior in his final season, hitting 29% market share of yards and 24% in touchdowns. But while those are good numbers, they aren’t elite.

He was on a much stronger pace before injuring his ankle, averaging 140 receiving yards per game, equating to a 35% market share of a historically productive passing offense. That was only for four games, but it gives a glimpse of what he was capable of, even while competing for production with Smith. 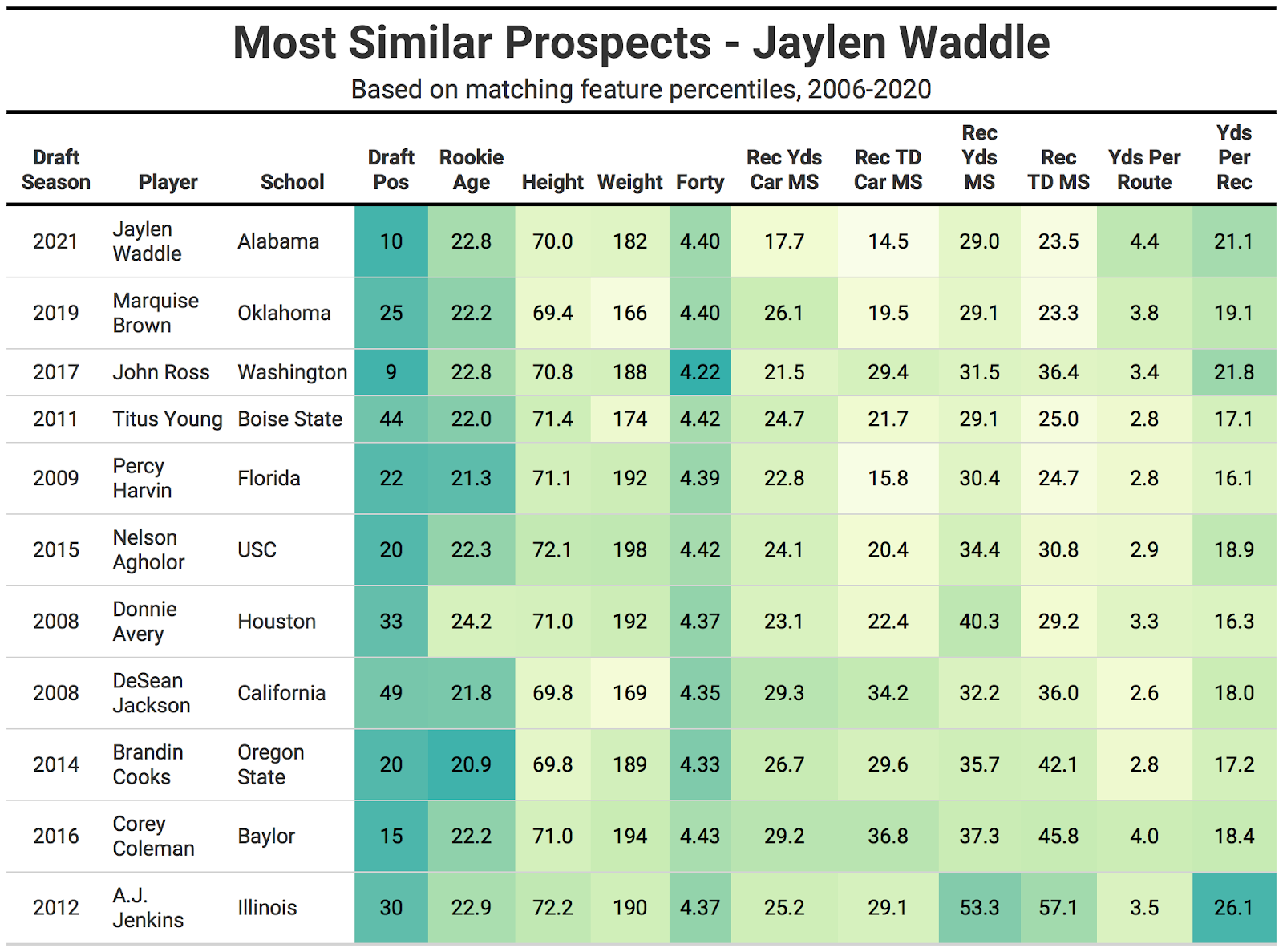 Waddle’s comps are held down by his superficial production numbers and his relatively old age for an early-declare true junior. It’s easy to say with hindsight that Waddle is a much better prospect than comps such as John Ross and Corey Coleman, but those receivers were viewed as potential stars at the time despite some red flags on their resumes.

There are also concerns about Waddle beyond the lack of production, with a significant injury taking him out of most of 2020 and affecting his pre-draft workouts.