Last week, we got our first real glimpse of wide receiver Odell Beckham Jr. in a Cleveland Browns uniform as the resurging side kicked off training camp at their facility in Berea, Ohio.

Beckham's first catch of training camp? A go route down the left sideline; a ball thrown by quarterback Baker Mayfield that was up and away from coverage and put in a spot where only Beckham could get it. It was the first of many, per multiple reports, and it appears like it's just the beginning of a partnership that is set to take the league by storm. 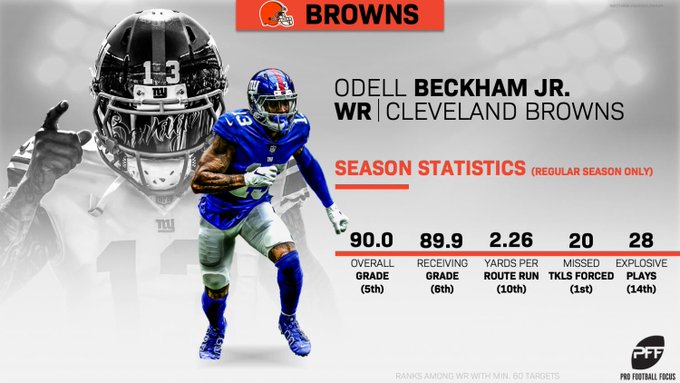 Before his blockbuster trade away from from the New York Giants, Odell Beckham Jr. had already established himself as one of the league's premier playmakers at the position. The highlight-reel grabs, the out-of-nowhere explosive plays and the seemingly effortless ability to create separation from defensive backs have all factored into 394 career receptions for 5,504 yards and 44 touchdowns. Aside from a 2017 season that was wrecked no thanks to a broken ankle, he’s earned grades of 84.0 or higher and posted over 1,000 yards receiving every season since being drafted with the 12th overall pick of the 2014 NFL Draft.

Despite playing in just 12 games last year, the star receiver put together an impressive campaign in which he earned a 90.0 overall grade off the back of 77 catches for 1,052 yards and six touchdowns. His 2.26 yards per route run ranked tied for 11th among qualifying receivers, and he remained a big-play threat by catching all nine of his catchable targets of 20-plus yards downfield for 303 yards and two touchdowns. All told, he was worth an impressive 1.98 Wins Above Replacement (WAR), which ranked 27th among all players and ninth among all non-quarterbacks.

Looking at his career as a whole, Beckham has earned a five-year receiving grade of 92.6 that ranks fifth among the 112 wideouts who've run at least 1,000 routes over the last five seasons. Including postseason play, only Julio Jones, Antonio Brown, A.J. Green and Michael Thomas rank ahead of OBJ in yards per route run (2.36) in that five-year span, while the former LSU standout ranks 11th in plays of 15-plus yards (118), ninth in first down receptions (259), eighth in yards after the catch (2,006) and third in missed tackles forced (82) among that same list of qualifiers. 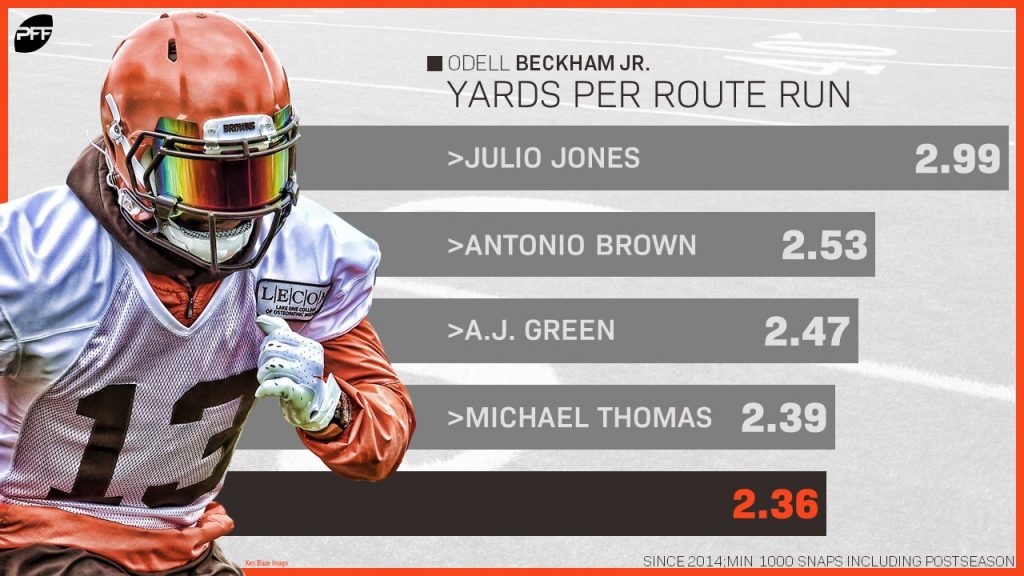 It's been an excellent start to a career that has all the promise of making it to Canton once it's all said and done. But the truly incredible thing about his numbers thus far is that while other wideouts have had the privilege of catching passes from the likes of Matt Ryan, Ben Roethlisberger and Drew Brees, Beckham has had to do the same with an aging and declining Eli Manning at the helm.

But now that he's trading one of the league’s lowest-graded signal-callers for a top-10 player in Baker Mayfield, we think Odell Beckham has a real shot at earning career-high marks across the board in 2019, and here's why.