Daniels is in the conversation to start along the Bears’ offensive line in his first NFL season for Chicago. The rookie is currently battling through a nagging shoulder injury in camp and after being held out of the Hall of Fame game, logged 44 snaps at center in the Bears' second preseason game behind current starter Cody Whitehair. Daniels joins the Bears fresh off of a tremendous year at Iowa in which he was the highest-graded center in terms of run-blocking in the entire class. Daniels can also hold his own in pass protection, allowing only 10 pressures last season and recording a 97.8 pass-blocking efficiency rating, T-22nd among draft-eligible centers. Iowa head coach Kirk Ferentz called Daniels the most NFL ready center he’s ever coached, so the opportunity is certainly there for Daniels to showcase his talents along the interior offensive line of the Bears sooner rather than later. 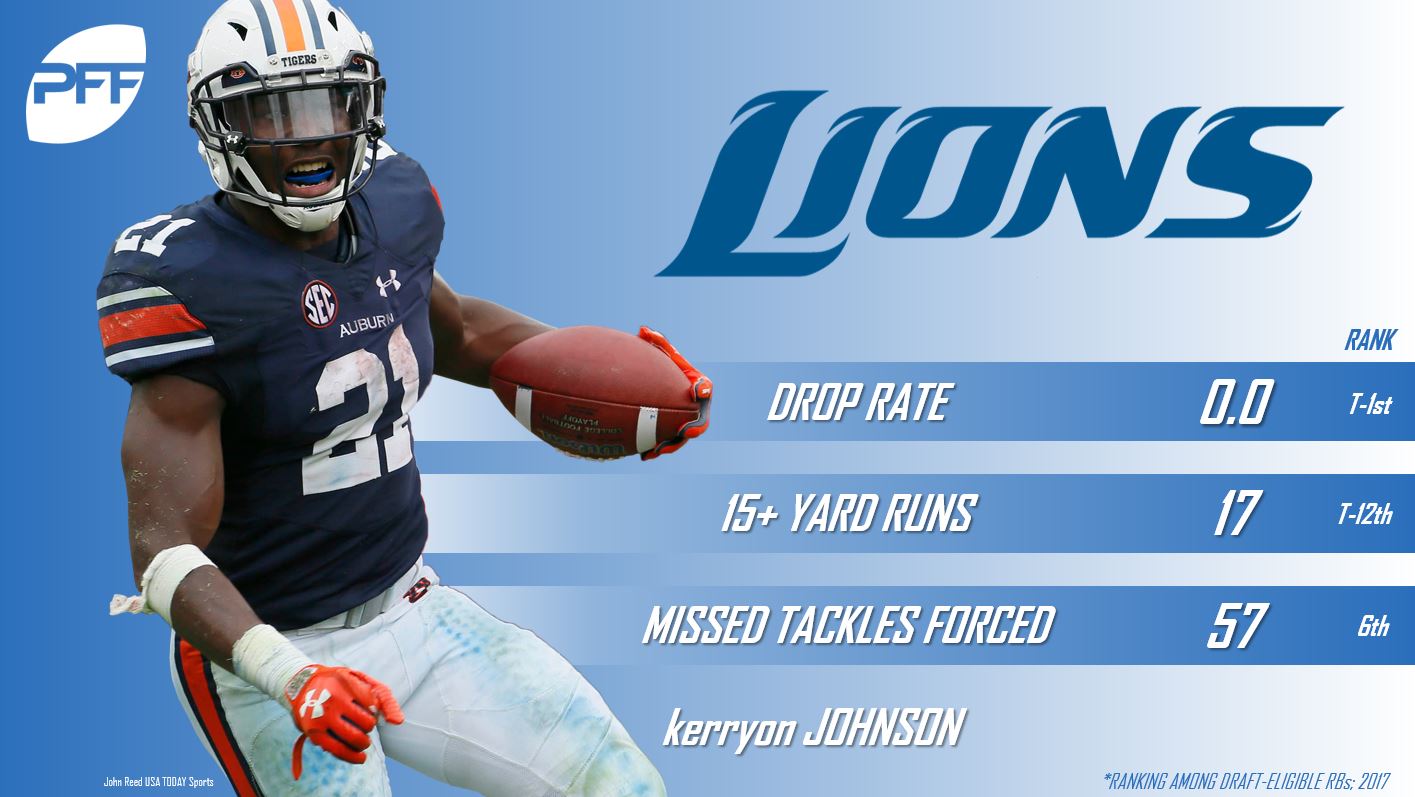 Johnson will look to split carries with newly acquired running back LeGarrette Blount, but the rookie runner is battling the likes of Ameer Abdullah and Dwayne Washington for playing time. Johnson improved his PFF rushing grade every season at Auburn, and he entered the draft after an impressive year in which he had the sixth-best overall grade in the class. He’s a tall, upright runner with good speed and the ability to make big plays on the ground and as a receiver. In 2017, Johnson had 17 runs of 15-plus yards and a breakaway percentage of 33.8 percent, which ranked 23rd among draft-eligible running backs. Johnson also isn’t easy to bring down as he broke 50 tackles on 285 carries in 2017, averaging 2.9 yards per carry after contact while gaining a total of 826 yards after first contact for the Tigers. Johnson was not tackled on first contact on 35.8 percent of his rushing attempts last season, ranking 20th among the draft-eligible running backs. Johnson is also a more than adequate pass catcher, as he finished with zero drops on 24 catchable passes. The Lions are searching for a runner to step-up in major way as the team combined to force only 42 missed tackles on 339 attempts in 2017, so Johnson might be just what the doctor ordered. 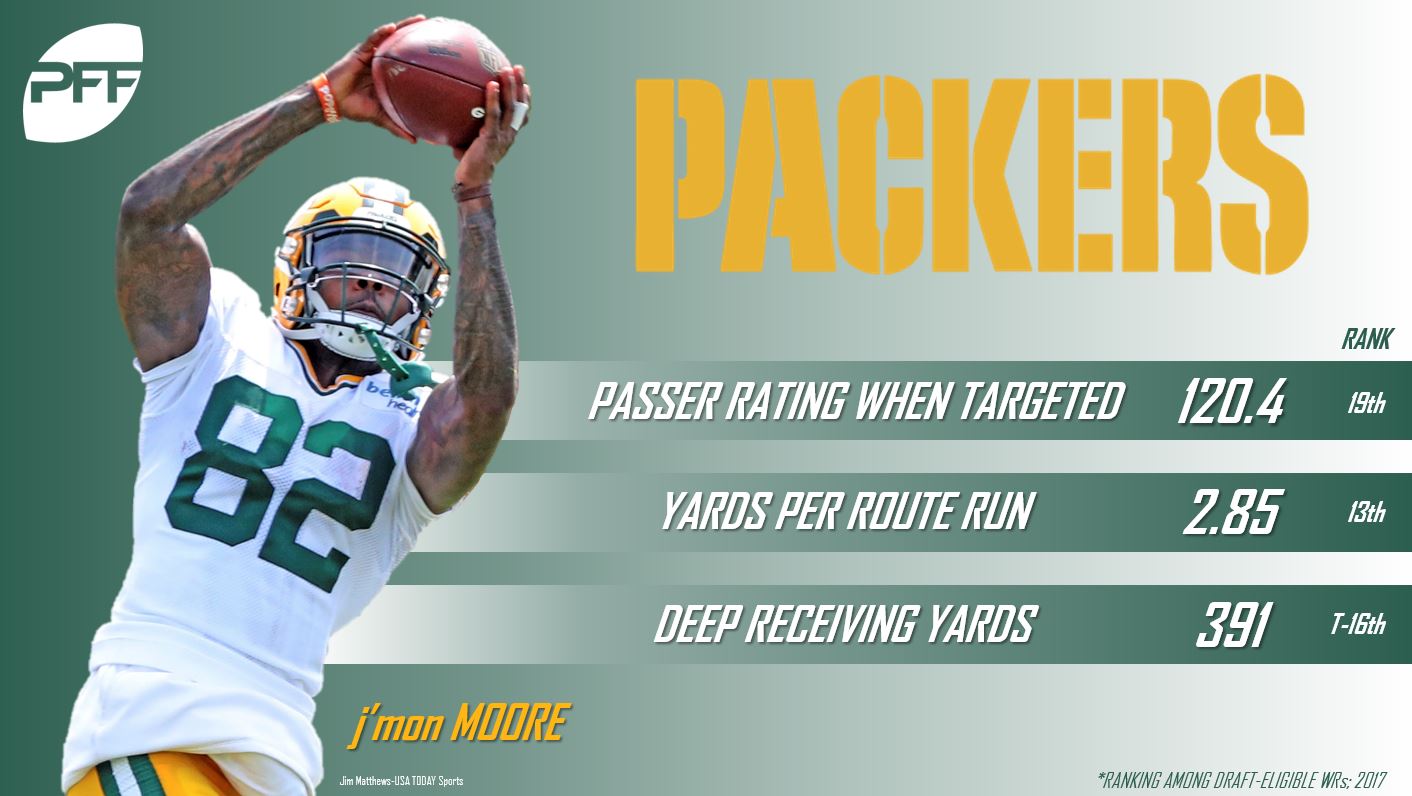 The Packers went defense heavy early in this year’s draft selecting two starting caliber cornerbacks, but wide receiver J’Mon Moore could be an underrated steal in the fourth round for Green Bay. Moore boasts an impressive set of tools. He has size at 6'3” and 207 pounds, along with strength as he was one of just four receivers who exceeded 20 bench reps at the combine. He added to his resume at the combine by running the fastest shuttle time of 4.04 seconds among draft-eligible wide receivers, and his vertical leaping ability was showcased when he jumped 38 inches, within the top five of the wide receiver class. Moore had an up-and-down career at Missouri. Over his career with the Tigers, Moore forced a total of 26 missed tackles on 159 career receptions, and he had a solid showing after the catch in 2017, forcing 14 missed tackles on 66 catches and averaging 6.5 yards after the catch per reception. Moore adjusts well to off-target throws, as he caught 57.9 percent of contested targets, but he also logged 24 drops. If the rookie receiver can continue to improve he has all the tools to make an impact throughout camp and the preseason.

The future is bright in Minnesota with a roster loaded with talent, and many key contributors locked into team-friendly contracts past the 2020 season. Rookie opportunities will be limited, but former Auburn kicker, Daniel Carlson, has an opportunity to supplant last season’s kicker, Kai Forbath, with a strong camp and preseason. The rookie has a monster leg as he hit 14 field goals of 50-plus yards over the past four seasons for the Tigers, and he enters the NFL as a player more than capable of hitting from 55-plus regularly. Carlson earned the highest overall grade among all FBS kickers last season at 90.4. This is a welcome sight in Minnesota as Forbath finished T-28th among kickers with a grade of 57.3, and his 84.2 percent field goal rate ranked 17th. If there is a concern though, it’s that Carlson's accuracy dipped in 2017 to 77.8 percent from 86.7 percent in 2016, and it wasn’t just from long distance. Sure, four of his nine missed field goals came from beyond 50 yards, but he missed one from 20-29 yards, two from 30-39 range, and another two from 40-49 yards. Nonetheless, Carlson certainly has the ability to correct those issues and potentially win the kicking job for the Vikings.