With our wealth of knowledge both at the NFL and FBS level, here are some under-the-rader rookies that have been turning heads and that you may get to see a lot of this preseason, and what they did in college a year ago: 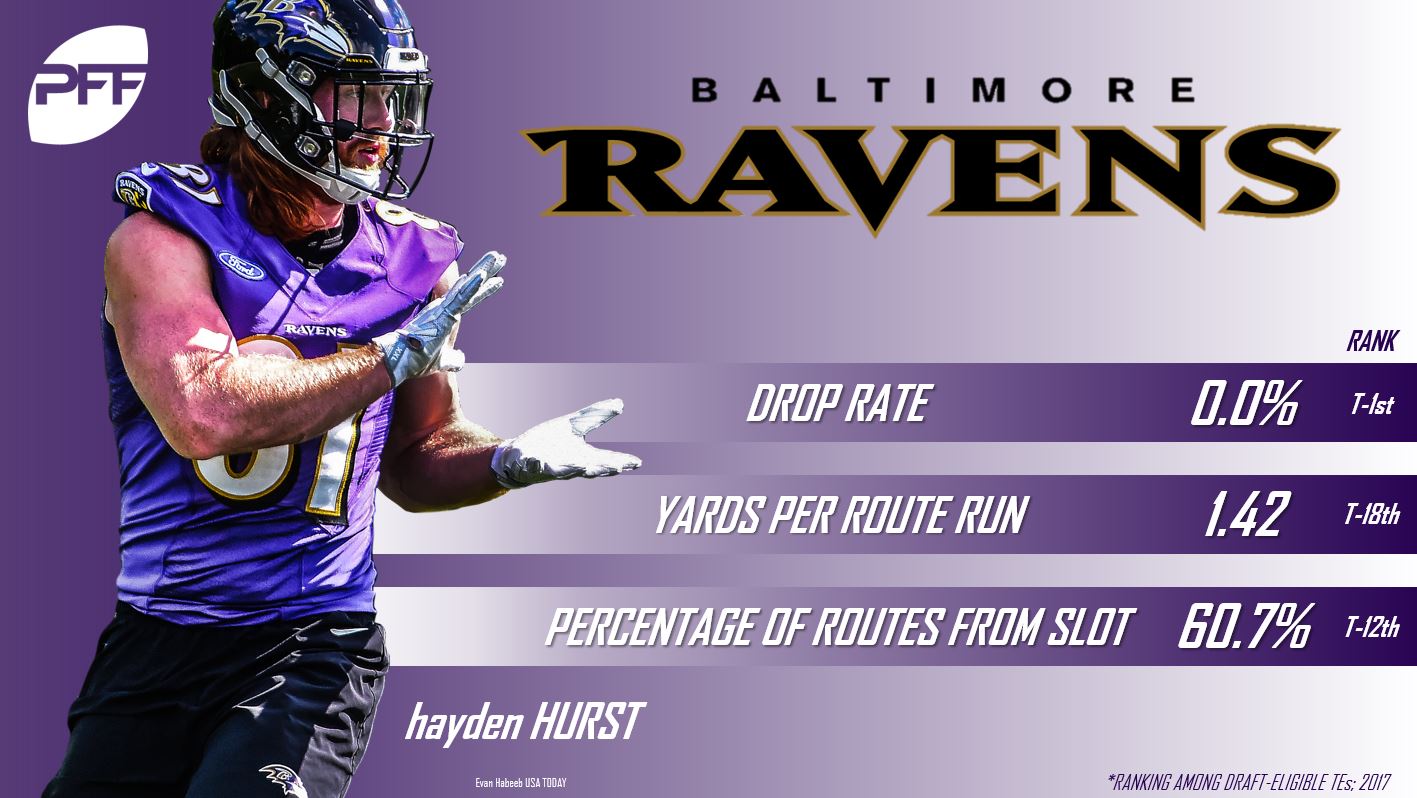 Baltimore’s rookie tight end is battling Nick Boyle, Maxx Williams and fellow rookie Mark Andrews for a major role in the Ravens offense. Putting his age aside, Hurst’s athleticism stood out coming out of South Carolina, as he has the speed to work up the seam and the quickness and toughness to make plays in the short game. Not only does Hurst have the potential to create mismatches in the slot or out wide at the NFL level, but he provides a sure-handed option for signal-caller Joe Flacco. In his final year as a Gamecock, Hurst did not record a single drop on 43 catchable passes. What’s more important, is that he dropped just three of 103 catchable passes throughout his collegiate career.

He continued that with his debut performance in the Hall of Fame game, hauling in all three of his catchable passes.

George Iloka and Shawn Williams currently sit atop the Bengals depth chart at safety, but don’t be surprised if Bates pushes for playing time with the starters. Bates has the size and movement skills to develop into a solid player in a two-high system, and some of his best play came when he was isolated on receivers in one-on-one situations. When targeted in coverage last season, Bates allowed 0.64 yards per coverage snap, tied for 46th best among draft-eligible safeties, and 0.83 yards per coverage snap when targeted in slot coverage, 33rd best. In the run game, Bates was aggressive and physical during his time at Wake Forest, though he must cut down on the missed tackles and big plays that he allowed in 2017. Bates missed 22-of-197 career tackle attempts, including 16 during his final season.

While Duke Johnson will soak up most of the targets in the pass game, Carlos Hyde and Chubb will compete for carries at Cleveland’s running back position. Chubb was a high-level recruit coming out of high school and was dominate in his first season at Georgia, earning SEC Freshman of the Year honors, but his career was dealt a blow during his sophomore year as a major knee injury ended his season. He was clearly not the same player in 2016, but he had a resurgence last season showing the NFL that he hadn’t lost the ability to dominate on the ground. Chubb produced an elusive rating of 95.2, the fourth-best mark in the draft class, and had 18 runs of 15-plus yards last season. Cleveland’s rookie back possesses solid power, cutting ability and speed, and despite the injury, was never overloaded with work in college. After averaging a career-best 3.8 yards per carry after contact in 2017, it appears Chubb is back at the top of his game entering his first NFL season. 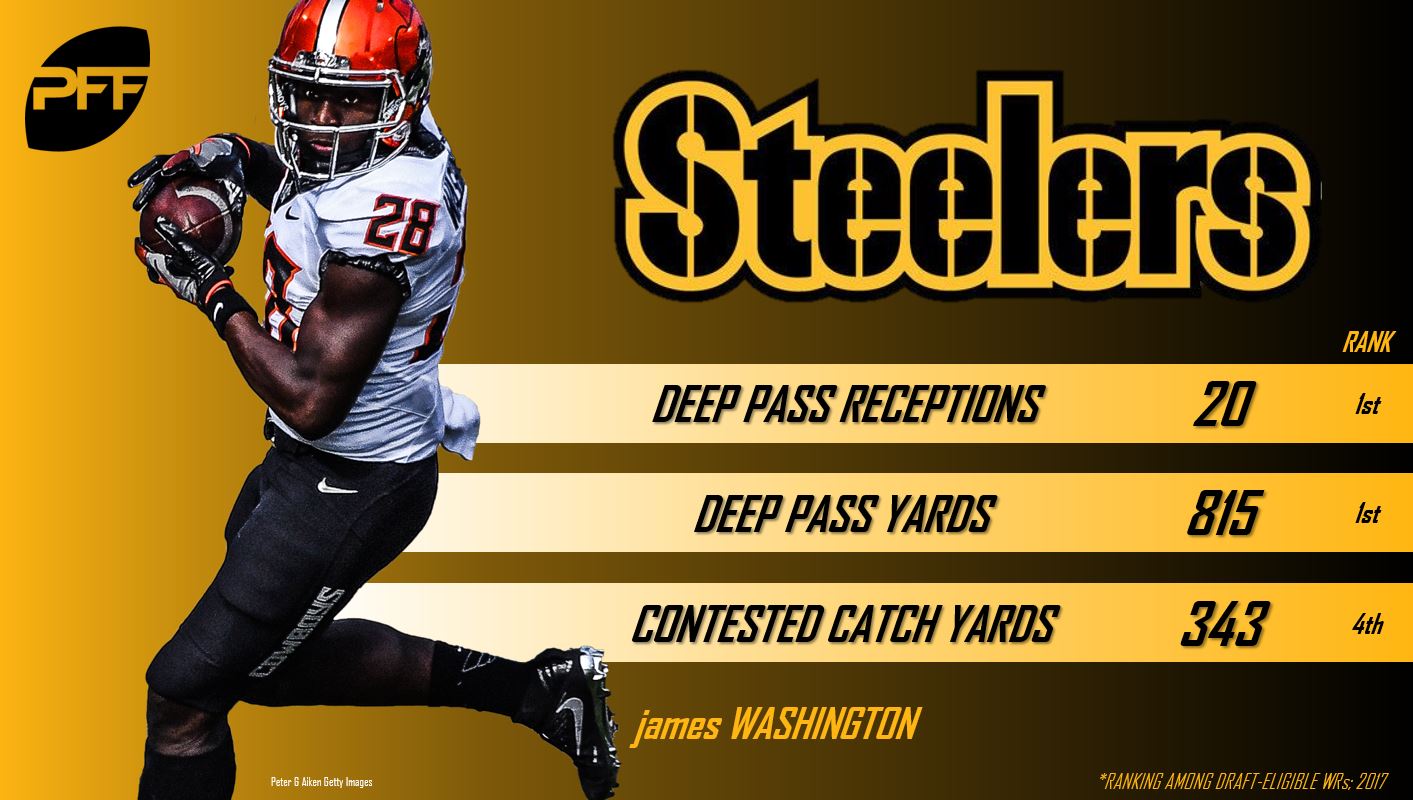 The Steelers are loaded with talent at the wide receiver position with superstar Antonio Brown and up-and-coming star JuJu Smith-Schuster, holding our No. 5 rankings in our preseason receiving corps rankings. Washington has the ability to push for snaps in multiple receiver sets. Washington was one of the nation’s most efficient deep receivers over the last three years at Oklahoma State. In his final season with the Cowboys, Washington led the nation with 20 receptions for 815 yards on deep passes, and he ranked second with eight touchdowns on passes of 20-plus yards downfield. Pittsburgh’s rookie wide receiver has also continued to improve his game in contested situations, ranking fourth in the nation with 343 yards on contested catches last season. The rich get richer in this area of the pass game as the Steelers pass-catchers ranked fifth in contested-catch rate a season ago. Washington’s speed plays well on the field, especially his ability to maintain it in and out of his cuts, so look for the rookie to make some flash plays in camp and throughout the preseason.