HOUSTON, TX - FEBRUARY 05: Deion Jones #45 of the Atlanta Falcons reacts after a play in the first quarter during Super Bowl 51 against the New England Patriots at NRG Stadium on February 5, 2017 in Houston, Texas. (Photo by Patrick Smith/Getty Images)

It is no coincidence that the Atlanta Falcons earned the 19th- and 25th- ranked coverage and defensive grade, respectively, in 2018 — the year Deion Jones had his season cut short due to a foot injury. And while Atlanta also lost safety Keanu Neal in the same game, the PFF data suggests that Jones is the player that the Falcons need as the leader of their defense.

The 2017 season was a different story for the Falcons. The defense maintained an 87.6 team defense grade and a 91.0 coverage grade, both of which ranked inside the top eight in the league. This was the season in which Jones proved himself as a top-tier talent in the NFL, as he went on to earn an 87.3 overall grade and a 91.1 coverage grade across his 1,020 defensive snaps. 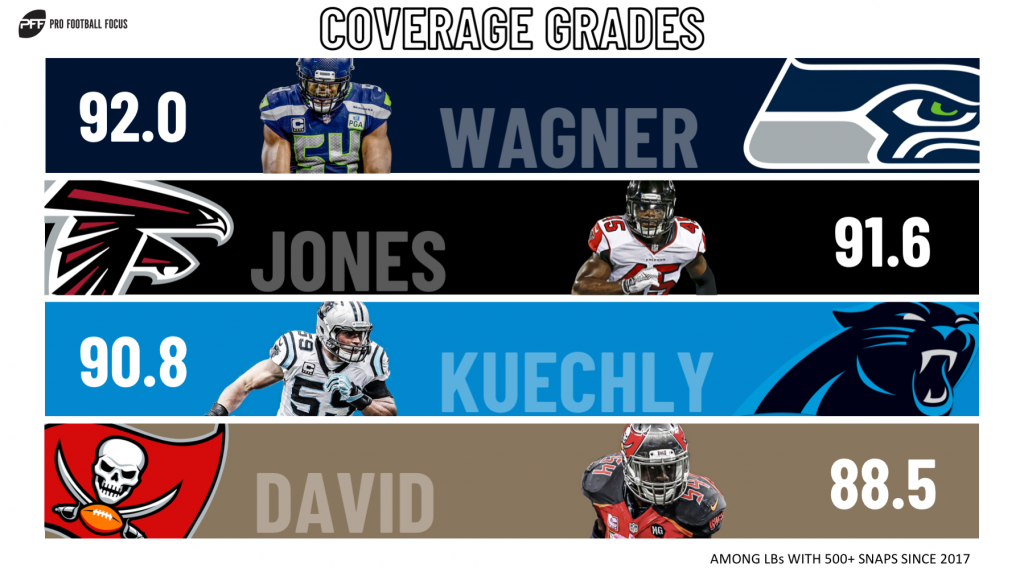 Jones looked to be going about his business as usual in Week 1 of the 2018 campaign, as he earned a 90.2 defensive grade across 69 snaps against the Philadelphia Eagles in the season opener. However, injury struck, and after 11 weeks on the inactive list, Jones struggled to refind his feet when he returned, and he earned a 67.9 grade over the last five games of the season.

You do not have to look far to find the area in which Jones excels. His coverage ability, more specifically his ability to break on throws and make plays in the open field, is arguably second to none. Jones produced 22 coverage stops in 2017, the third-highest total of any linebacker in the NFL, and he led the league with nine combined pass breakups and interceptions. These PFF metrics resulted in Jones leading the league in 2017 with a 91.1 coverage grade. 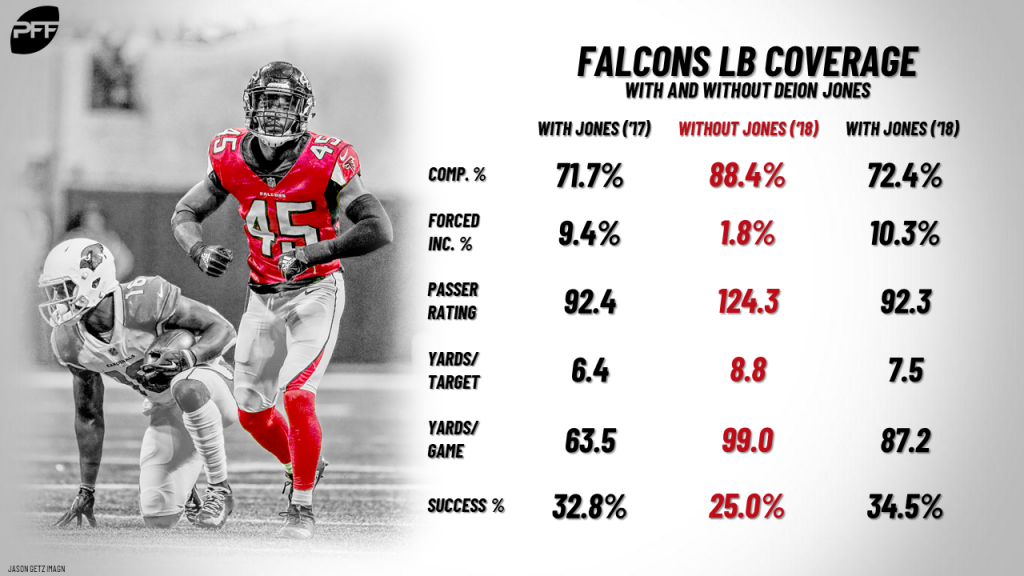 The LSU alumnus is entering the fourth year of his rookie deal after being drafted in the second round of the 2016 NFL draft, but PFF data suggests the Falcons might want to look to get ahead of the pack and sign Jones to an extension.

Looking at his tape, it's not hard to notice that Jones consistently makes plays in coverage, plays that could easily result in a touchdown for a majority of linebackers in the NFL. This playmaking ability is displayed here as rolls to the left and sprints upfield to stall a screen pass to Tarik Cohen, one of the NFL’s most dynamic players.

Jones’ rare athleticism translates to freakish playmaking ability on the field. The below example is one of many, but it may be the most notable, as he picked off future Hall of Fame quarterback Drew Brees to seal the win over New Orleans. Jones' 33” vertical leap ranked 13th among draft-eligible linebackers in the 2016 draft class, and it showed itself here.

It was not a tough decision to put Jones on PFF’s top 25 NFL players under 25 list. We detailed Jones’ career by highlighting His 12.2 forced incompletion percentage which ranks first among qualifying linebackers since 2017, and his 81.0 passer rating allowed which ranks second. Look for Jones to make his case as a Comeback Player of the Year candidate in 2019 as he hopes to not only formulate a comeback season for himself but for the Falcons as well.