For most of the 32 NFL teams, the 2018 season has been consigned to the ash heap of history, and it’s time to turn attention to the future. Nowhere is the promise of the future better embodied than in young players who are already in the league, so we’re going to take a look at some of that young, proven talent.

This is our opportunity to display where the future of the NFL is heading and acknowledge the budding stars of the NFL. This list is based on the cumulative body of work for each player to date, factoring in grades, signature stats and team impact. In some situations, players with multiple seasons of “good” play were viewed favorably as opposed to players with a mixed bag or just one great season under their belt.

Here, in no particular order, are the 25 best players in the league who will be under 25 years old by Week 1 of the 2019 NFL Season.

The now third-year quarterback is coming off a simply sensational 2018 season that rightfully ended with MVP honors. Mahomes' overall grade of 92.9 is currently tied with 2013 Peyton Manning for the ninth-best grade of the PFF era (2006 – present), and his 134.2 passer rating from a clean pocket is the highest single-season mark of the PFF era among signal-callers with at least 500 dropbacks. Long may it continue. 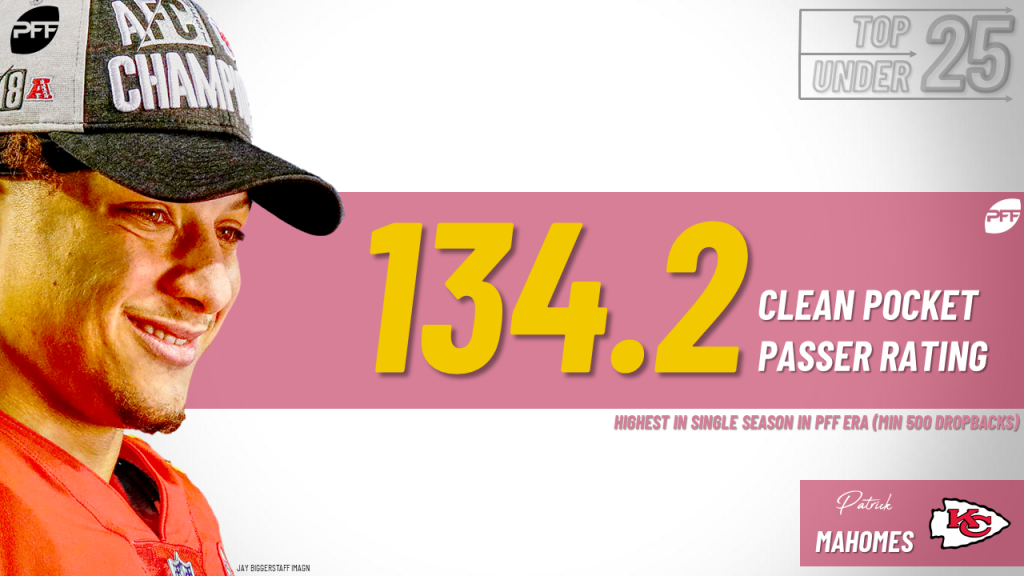 We've watched many memorable rookie seasons over the last 13 years, but few were as good as Baker Mayfield's arrival to the big time. Mayfield managed a big-time throw rate of 7.3% that ranked third among his peers a season ago, and he finished the year with an overall grade of 84.5 – the second-best mark ever recorded by a rookie quarterback. The future is indeed bright in Cleveland.

ACL injury and offensive line issues aside, it's been so far so good for Watson and the Texans. Over the last two years, Watson has earned an overall grade of 79.1 that ranks 17th among qualifying quarterbacks in that span, while his 111.7 passer rating from a clean pocket is good for fourth among the 54 quarterbacks with at least 100 clean-pocket attempts. Not only that, but he’s also managed to produce a successful play on 35.8% of his pressured dropbacks since 2017, which ranks behind only Peyton Manning (37.7%), Matt Ryan(36.6%) and Ben Roethlisberger (36.6%) as the fourth-best mark of the PFF era.

After a disappointing rookie year with Jeff Fisher at the helm, the former No. 1 overall pick has blossomed in the subsequent years with Sean McVay. His 2018 season was his best year to date; he ended the regular season with an 85.5 overall grade, and he finished eighth in the NFL in clean-pocket big-time throw percentage (5.45%) on the year.

Now three years into his NFL career, Kamara has been almost unstoppable in the Saints' offense. His two-year rushing grade of 87.9 ranks fifth among backs with at least 100 attempts in that span, while his two-year receiving grade of 92.6 ranks first.

Saquon Barkley was as advertised: he nothing short of sensational in his rookie year. In his 16 games, Barkley racked up 1,307 rushing yards from his 261 attempts, with 872 of those yards coming after contact (the fourth-most by a rookie running back in the PFF era). However, as great as Barkley was as a runner, his real value came from his receiving snaps, where he caught 91 of his 114 targets (both of which broke PFF records for a rookie) for 721 yards. His average of 1.54 yards per route run ranked 10th among the league’s backs last year, but his 31 missed tackles forced as a receiver set a record for the most by a rookie running back in the PFF era. 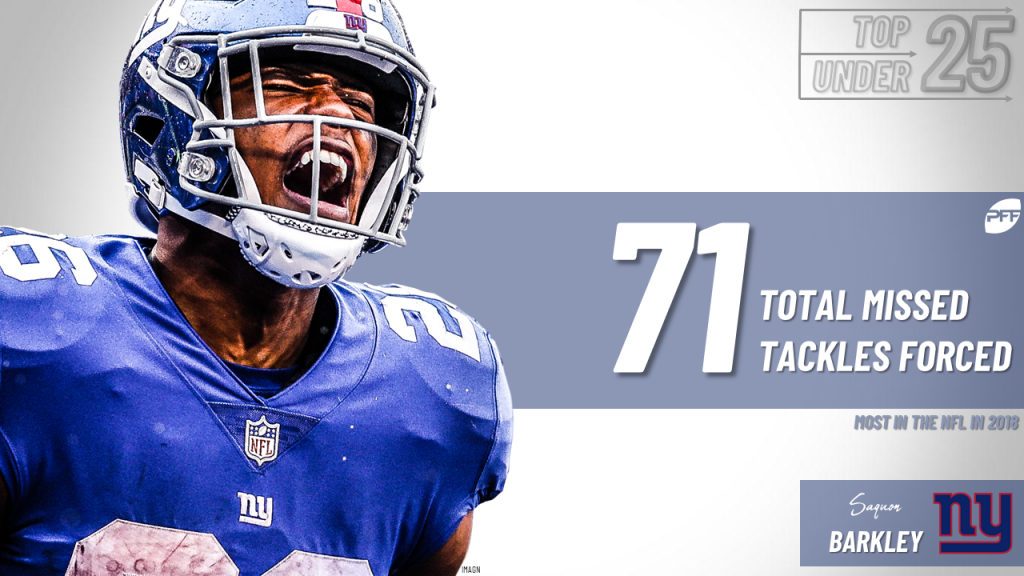 With Antonio Brown now out of town, the thankless task of carrying the Pittsburgh passing attack will fall on the young shoulders of third-year receiver JuJu Smith-Schuster, but that's a task that he's proved to be more than capable of doing. After running 64.4% of his career routes from the slot, Smith-Schuster has amassed the most slot-receiving yards of any wide receiver (1,342) over the last two years, while his 110.0 slot WR rating ranks seventh among qualifying pass-catchers in that span. 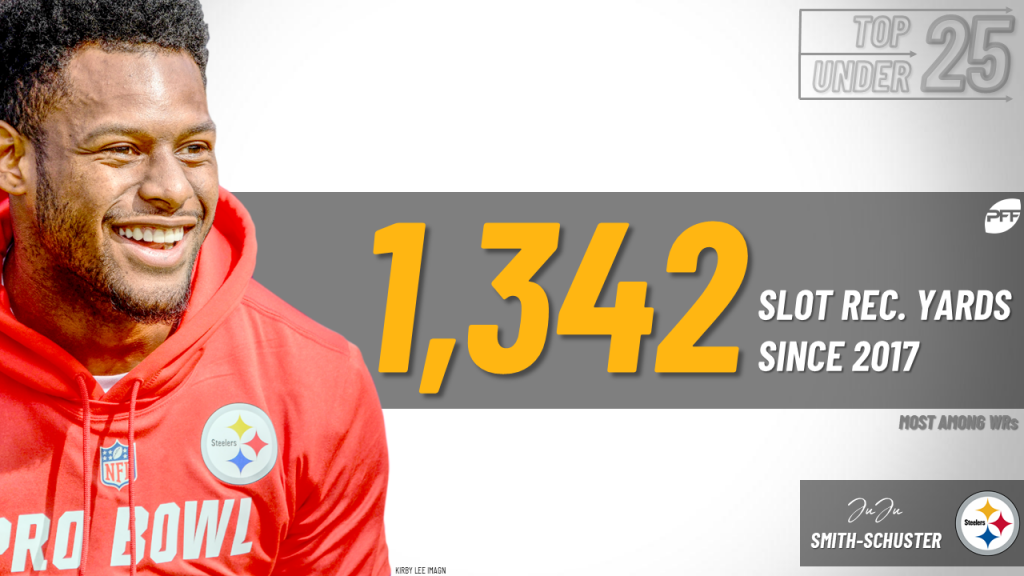 Howard bounced back from an underwhelming rookie campaign and showed us exactly what he was capable of in Year 2. He ended the 2018 season as our third-highest graded tight end, and his average of 2.26 yards per route run ranked third among the 64 tight ends with at least 100 snaps in route.

The former Notre Dame standout allowed just 23 pressures on 730 pass-blocking snaps in 2018, and his resulting pressure percentage of 3.4% ranked 12th among guards with at least 200 snaps last year. Nelson finished a superb rookie season with an overall grade of 74.3 and a pass-blocking grade of 81.9, good for sixth and 13th among guards last year, respectively. He'll be a key cog in the ever-evolving Colts machine for years to come.

During his time in the NFL, Clark has shown the ability to impact the game in multiple areas, and he has earned the right to be considered one of the league's better interior defenders. A season ago, he led his team in quarterback pressures (46) — a tough feat for a player rushing from the interior of the line — and he also led his team in run stops (28).

Yannick Ngakoue has developed into one of the most productive pass rushers in the entire league over the last three years. His 193 quarterback pressures since 2016 are the ninth-most among edge defenders in that span, and his pass-rushing grade of 83.3 ranks 16th among the 90 edge defenders with at least 500 snaps.

Like Ngakoue, Danielle Hunter has, in his own right, earned the right to be in the conversation about the league's best young pass rushers. His 190 pressures since 2016 are tied with Frank Clark for the 11th-most among all edge defenders in that span, while his 8.0 pass-rushing productivity rating ranks 15th among the 90 edge defenders with at least 500 snaps.

When Bosa is healthy and on the field, there is arguably no stronger force in the pass-rush. Among the 85 edge defenders who have logged at least 500 pass-rushing snaps since 2016, Bosa's win rate (21.0%) and pressure rate (21.2%) both rank first. 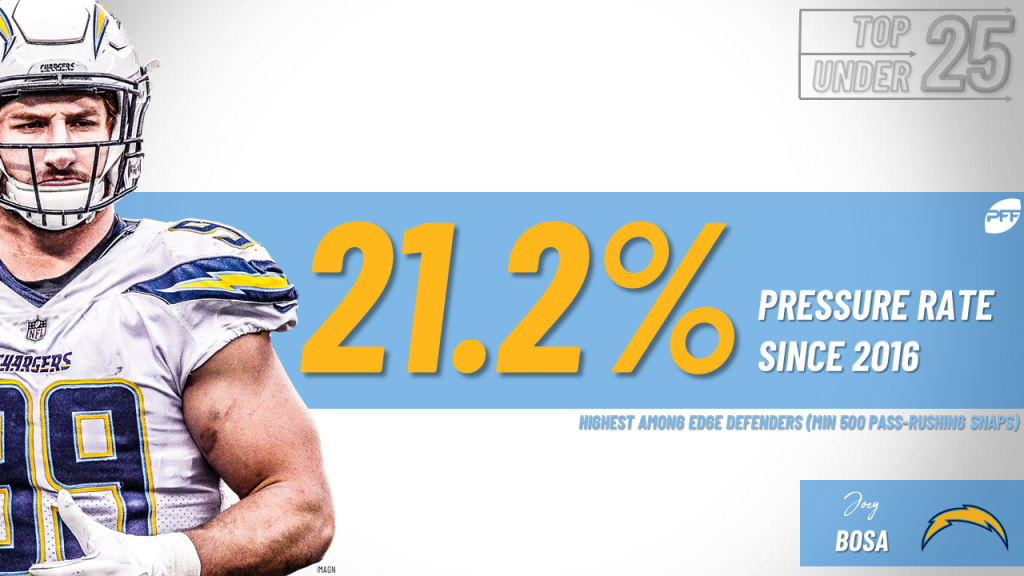 Now heading into Year 3 of his career, Garrett has been as exactly as advertised since he was drafted with the first overall pick of the 2017 NFL Draft. His 86.2 pass-rushing grade in Year 2 of his career currently ranks eighth among the 80 edge defenders with 300 or more pass-rushing snaps in their second season in the league. The only men ahead of him on the list: Von Miller (93.1), Joey Bosa (91.3), Shawn Merriman (90.6), Yannick Ngakoue (90.5), Khalil Mack (90.5), Cameron Wake (90.1) and Elvis Dumervil (88.1). The odds are that he'll continue to dominate from the edge for the foreseeable future.

Vander Esch ended his rookie season as one of only four linebackers who earned grades north of 80.0 in run defense and coverage, while his overall grade of 84.9 was good for fourth among all players at the position. The former Boise State Bronco’s 54 total stops were the fifth-most among linebackers, and his five forced incompletions in coverage are good for fourth-most among rookies. It may only be one year, but the Cowboys seem to have secured the next great star at the linebacker position.

While Leonard's raw tackle totals jumped off the page throughout his rookie season, they shouldn't take away from an incredibly promising performance in all facets of the game. He earned overall grades north of 70.0 as a run defender (70.8), a tackler (85.4), pass rusher (73.4) and as a coverage defender (84.8). He'll be a key component of Matt Eberflus' defense moving forward.

One of the NFL's premier coverage linebackers, and therefore one of the most valuable players at his position, Jones has earned a coverage grade of 91.6 over the last two seasons, which ranks second among linebackers in that span. His 12.2 forced incompletion percentage ranks first among qualifying linebackers since 2017, and his 81.0 passer rating allowed ranks second.

White has been more than solid over the course of his two-year career so far, and he has earned a two-year coverage grade of 83.3 for his efforts. Since 2018, he's allowed just 51.9% of his targets to be caught, and he has allowed a passer rating of just 69.1 on throws into his primary coverage.

Lattimore has earned an 88.7 coverage grade over the last two years in the league, and he figures to be a difference-maker at the position maker for years to come. Since 2017, the former Ohio State corner has allowed a passer rating of just 68.8 on throws into his primary coverage – fifth among cornerbacks with at least 100 targets in that span.

Humphrey will enter his third year in the NFL as arguably the most important player on the Ravens' defense, but his play over the last two seasons has proved that he's more than up to up to that daunting title. Humphrey has amassed 37 forced incompletions over the last two seasons — the seventh-most among cornerbacks in that timeframe — and his 65.7 passer rating allowed is the third-best mark among those with at least 500 coverage snaps. 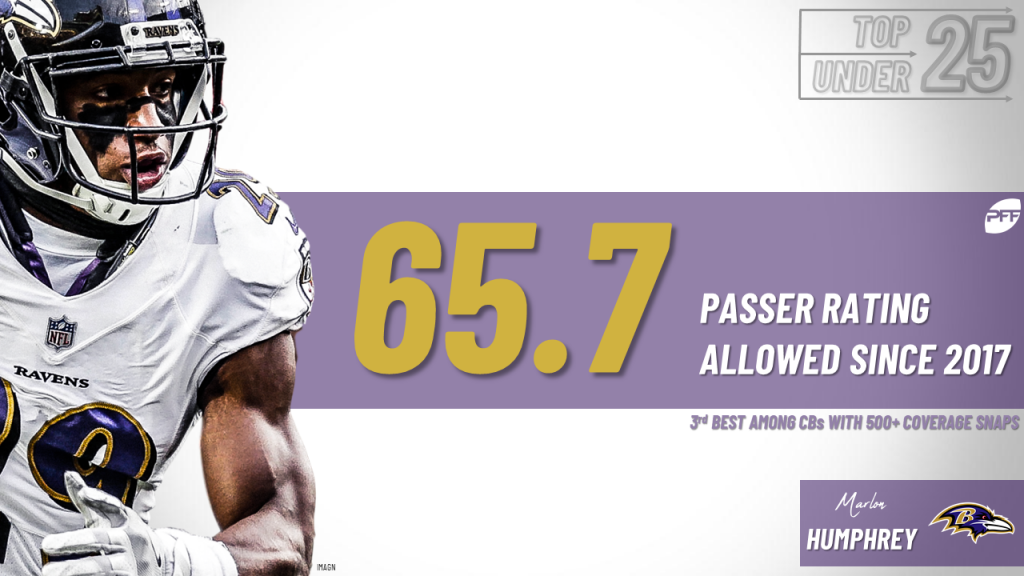 Injuries took their toll on Ward towards the end of his rookie season, but his early-season play is yet another great sign for the future of Cleveland. In his 13 games, Ward allowed a passer rating of just 70.7 on throws into his coverage, and he yielded an average of 0.88 yards per coverage snap – both of which ranked fourth among first-year cornerbacks.

Our Defensive Rookie of the Year for 2018, James figures to be a lethal weapon on the defensive side of the ball for years to come. In his 16 games last season, James has proved to be a jack-of-all-trades, and out of his 1027 defensive snaps, he logged 205 on the defensive line, 418 in the box, 166 as a slot cornerback, 22 as a perimeter cornerback and 216 as a free safety. His 19 total quarterback pressures and 40 defensive stops both ranked first among first-year players at the position, and he allowed a passer rating of just 71.8 on throws into his primary coverage.