All of PFF’s ELITE subscribers have access to PFF Premium Stats, an online database loaded with advanced metrics and grades on all of the NFL dating back to 2006. In addition to grading every single player on every single play in the NFL, PFF collects over 180 data points on every play (e.g. point of first contact, air yards, contested targets) to create an expansive database of advanced statistics and metrics. All of which are made available in PFF Premium Stats.

PFF Premium Stats, as you could imagine, is significant in size and detail. Analysts, writers, NFL fans and even PFF employees can get lost in the waves of data provided. With that being said, here’s an in-depth breakdown of PFF Premium Stats and all of its valuable information.

The By Game section of PFF Premium Stats allows all ELITE subscribers to view advanced stats and single-game grades for NFL players in every preseason, regular season and postseason game dating back to 2006.

For example, ELITE subscribers can find all of the advanced stats and single-game grades from the New England Patriots’ 13-3 win over the Los Angeles Rams in Super Bowl LIII in the By Game section. Quarterback Jared Goff earned an abysmal 28.9 passing grade under pressure in the affair, completing just 4-of-14 passes for 47 yards and one interception across his 18 pressured dropbacks. Rams star running back Todd Gurley forced just one missed tackle and averaged 1.90 yards after contact per attempt across his 10 attempts.

And there’s still so much more. All ELITE subscribers can find out Tom Brady’s passing performance under pressure, when blitzed, when kept clean, when throwing deep to his left, when targeting Julian Edelman, etc. How many pressures did Aaron Donald record in Super Bowl LIII? Only two according to PFF Premium Stats. Did Marcus Peters perform well in coverage? He allowed four receptions from seven targets for 53 yards and two first downs according to PFF Premium Stats.

The data made available in the By Game section of PFF Premium Stats is more detailed and more expansive than any other post-game box score you can find elsewhere. There’s no better tool to use when interested in single-game performance during the preseason, regular season or postseason.

The homepage for the By Game section provides overall team grades and facet team grades dating back to the 2006 season. ELITE subscribers can see where teams rank in overall grade, offense grade, defense grade, coverage grade, rushing grade, receiving grade, pass-rushing grade and more for any of the 13 seasons PFF has graded in full (2006-18).

Researching the 2018 regular season and postseason combined, the Los Angeles Rams led all NFL teams in overall grade (95.4) while the Arizona Cardinals ranked dead last with their 63.8 overall grade. The Rams also finished the season with the best run-blocking grade and seventh-best pass-blocking grade on the year.

The By Team section also provides an opportunity for ELITE subscribers to view all of the same advanced stats and grades made available in the By Game section at a season-to-date level. For example, ELITE subscribers can easily view the highest-graded offensive player on the Green Bay Packers, the worst pass-blocker on the Oakland Raiders or the Cincinnati Bengals’ leader in total pressures among hundreds of other things, including snap counts, touchdowns allowed in coverage, pressures allowed, etc.

All of PFF’s advanced stats and grades are made available at the season level for individual teams and players in the By Team section. It’s a great tool for ELITE subscribers interested in seeing the strengths and weaknesses of any one team’s current roster or rosters from previous years.

The By Position section of PFF Premium Stats is the easiest section to get lost in. All ELITE subscribers can view any and all of the stats and grades PFF has to offer for any season dating back to 2006 at the individual play level while also seeing how any one player ranks against his peers in said statistic or grade. There’s endless amounts of reports, data points and information available in the By Position section of PFF Premium Stats, so we’ve broken the section down by each position.

We encourage all ELITE subscribers to review PFF’s Signature Statistics Glossary to learn all about the metrics provided in the By Position section in PFF Premium Stats. 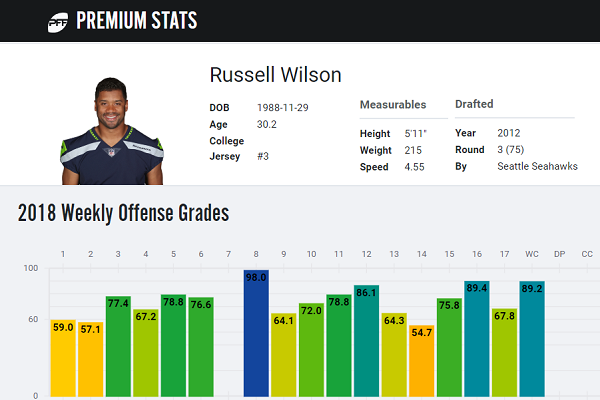 The By Player section of PFF Premium Stats is easily the best section to use when interested in advanced statistics or grades on any NFL player that has taken at least one preseason or regular season snap since 2006.

The player pages include seasonal and career snapshots of grades, advanced statistics and more. They’re a fantastic resource for those interested in researching specific player data and comparing players across different seasons.