• Out of the plays they were targeted on, Jets rookie CB Sauce Gardner had a pass breakup rate of 57%, followed by Packers CB Jaire Alexander (43%) — NFL's top 2 spots in that stat in Week 6.

• With a Perfectly Covered Play rate of 40% (by far their highest of the season), the Seahawks improved their cumulative PCP rate by 4% and started to close the gap on 31st place.

Following our extensive research on coverage in football, and the creation of Perfectly Covered Plays and Adjusted Coverage Rate, we now have recent data to analyze from the sixth week of the NFL season.

Let's evaluate how each team and defender performed in coverage in Week 6. 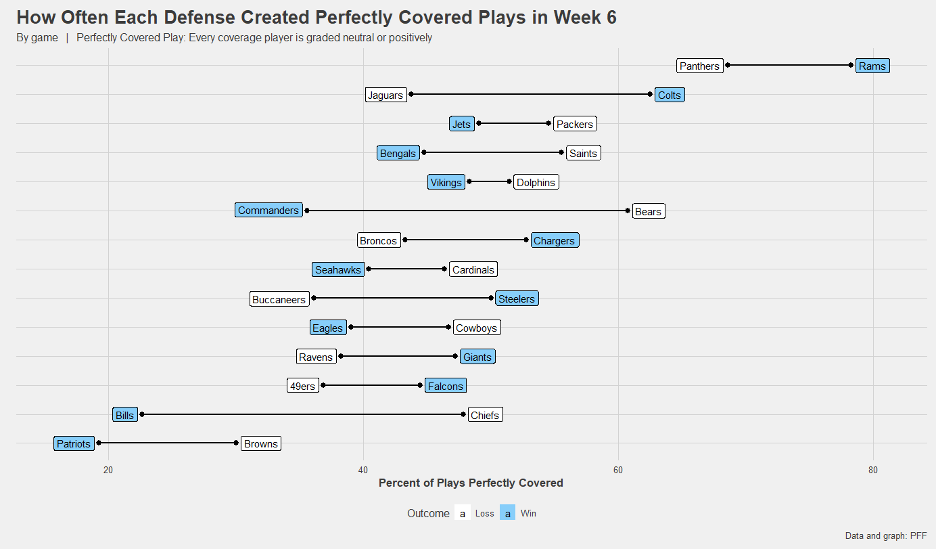 On the other hand, the New England Patriots and Buffalo Bills defenses perfectly covered the lowest percentage of plays this week. The Patriots coverage unit played very well against the Cleveland Browns, but they couldn’t get all of their defenders on the same page often, and the Browns offense still couldn’t capitalize. After losing many of their key plays to injury, the San Francisco 49ers defense struggled to create perfectly covered plays after having the highest average entering this week.

This week, the winning team had created more Perfectly Covered Plays 6/14 times. It’s the first week where the majority of losing teams had created the higher percent of perfectly covered plays than their opponent.

Perfectly Covered Plays is not just a defensive stat; preventing such plays is relevant for offenses, too. For the third week in a row (and fourth week this season), the Panthers offense faced the highest percent of perfectly covered plays. After moving on from their head coach and a likely rebuild of their entire offense coming, don’t be surprised if they end up facing the most perfectly covered plays the entire season.

Nine safeties were perfect in coverage this week, consisting of two from the Panthers and two from the Miami Dolphins. Jevon Holland had his fourth perfect week in coverage, having some great plays taking Vikings’ receivers out of the play this week. New Orleans Saints new S Tyrann Mathieu has been the star of their secondary, but the Saints’ corners cannot pick up the slack and gave up a ton of yards to the Cincinnati Bengals’ offense with Ja'Marr Chase.

Seven more linebackers didn’t let any pass catchers get open this week, highlighted by two Panthers in Shaq Thompson and Cory Littleton. Demario Davis played the most coverage snaps out of the bunch, locking down every Bengals player he faced.

After having only one cornerback perfect in coverage through the first 5 weeks, three cornerbacks (2 from the Rams) were perfect in coverage this week. Jalen Ramsey and Derion Kendrick made sure the Panthers’ pass attack couldn’t move the ball anywhere past the line of scrimmage. New York Giants CB Adoree’ Jackson also continues to show up on the top 5 here.

The New York Jets– Green Bay Packers game was full of great cornerback play, with Jaire Alexander and Sauce Gardner both breaking up a high amount of passes in stellar fashion. Out of the plays they were targeted on, Gardner had a pass breakup rate of 57% and Alexander had a rate of 43%, which was good for the top 2 spots in that statistic this week.

We can also check in on some 2022 draft picks based on how they performed in coverage. The rookies with the highest True Coverage Rates in Week 6 were:

Two rookies were perfect in locking up receivers this week, which is especially impressive for Kendrick (as corners naturally have the lowest rates). Kendrick and Rodney Thomas were both late-round draft picks, and it’s nice to see them have breakout games. Atlanta Falcons linebacker Troy Andersen gets his second Rookie of the Week honor with an average true coverage rate of 88%. Linebackers Quay Walker and Leo Chenal did have higher true coverage rates, but they only played a small amount of coverage snaps and therefore weren’t eligible.

However, some rookies struggled a little this week, with Bills cornerbacks Kaiir Elam (75%) and Christian Benford (75%), and Jacksonville Jaguars linebacker Devin Lloyd (85%) having the lowest true coverage rates in their positions. Benford was in his first game back from injury and played a smaller number of snaps than Elam, but they both struggled to cover the Kansas City Chiefs’ wide receivers, and Lloyd was beat by Indianapolis Colts WR Michael Pittman a handful of times.

The Rams defense only made mistakes and let receivers get open on 4% of plays, which is the lowest percentage of mistakes this season. The Pittsburgh Steelers defense had a nice bounce back game after getting torched by the Bills’ passing attack last week, and every one of their coverage players had above average true coverage rates this week.

In an unlikely statistic that wouldn’t have been able to be noticed on the surface, the Patriots coverage unit made the most mistakes this week. They didn’t let up a ton of big plays to the Browns, but they let their receivers get open way too often. However, the Patriots defense got bailed out as the Browns couldn’t capitalize. In a surprising turn of events, the Seattle Seahawks’ coverage unit is able to escape the bottom 5 for the first time this season after having a great game containing the Arizona Cardinals’ pass attack.

After dropping off this week, the 49ers surrendered the top spot to the Cardinals, who had a decent game covering the Seahawks’ receivers. The 49ers injuries are piling up, so look to see if they continue dropping down the rankings in this statistic in the coming weeks.

After the Seahawks had a perfectly covered play rate of 40% this week (by far their highest of the season), they improved their cumulative PCP rate by 4% and started to close the gap on 31st place. Next week, they face a Los Angeles Chargers’ offense that been great at evading perfectly covered plays, so that will be a big test for the Seahawks’ defense. The Patriots enter the bottom 3 after a bad coverage game against the Browns, and the Commanders hold steady with another below average game against a struggling Chicago Bears offense.

Some teams’ man and zone rates will vary by opponent, while some will stay steady throughout the season. This week, the league as a whole ran man coverage 32.5% of the time, which brings the cumulative average to 29.8%, therefore running zone on 70.2% of plays. We can see how each team’s percentage of running man and zone coverage evolves each week. Here are the teams that ran the most man and zone so far this season:

The Lions, Patriots, and Dolphins remain the three teams that used the most man after this week. The Lions had a bye, but the Patriots and Dolphins still ran a high percentage of man against their opponents this week.

After this week, the Rams and Vikings remain the top 2 teams that ran the most zone coverage. The Rams ran only one play in man coverage this week against the Panthers, and the Vikings ran man only 10% of the time. The Bills changed it up and ran a ton of man coverage (49%) against the Chiefs this week, so they left the top 3 zone teams.

Also check out weekly Man and Zone Analysis articles coming out soon for more in-depth analyses on this and predictions based on Week 7 matchups.