Journey to Super Bowl LIV: How the 49ers and Chiefs cemented their trip to Miami

Well, we’re here. After 20 weeks, we are left with the San Francisco 49ers and the Kansas City Chiefs to compete in Super Bowl LIV.

These two teams have a fun history. The Niners have won seven of the previous 13 matchups; Steve DeBerg, Joe Montana, Steve Bono, Elvis Grbac and Alex Smith have all started for both teams (and all went from San Francisco to Kansas City), and the last meeting between the two franchises ended what was going to be Jimmy Garoppolo’s first season as the signal-caller for the 49ers, as the young quarterback tore his ACL in a 38-27 loss in Arrowhead Stadium.

These teams took different paths to the Super Bowl, with the Chiefs going off at about 8-1 to win it all when the season started while the Niners were far bigger underdogs at 33-1. The Chiefs started 4-0, with three of those wins coming on the road, while the Niners didn’t lose until their ninth game of the season. 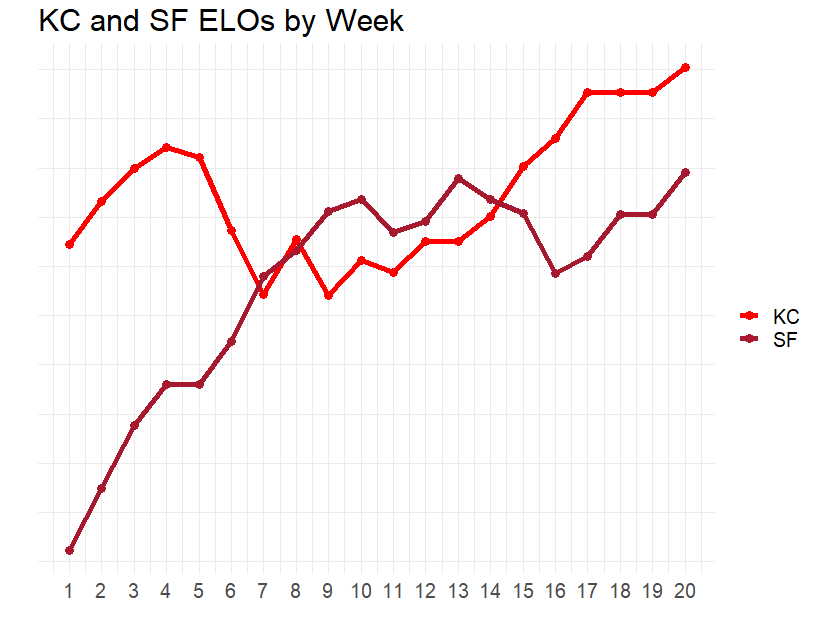 Adversity struck in different ways for both teams, though, as the Chiefs lost three games in four tries (all at home) after their 4-0 start, with quarterback Patrick Mahomes limping his way through one-score losses to Indianapolis and Houston and then dislocating his knee cap in a victory in Denver. Backup Matt Moore was impressive while going 1-1 in two starts, and after a 35-32 setback in Nashville with Mahomes back at the helm, the Chiefs finished the regular season with six consecutive wins, earning the AFC’s second seed after Miami toppled the defending champion New England Patriots in Week 17.

The 49ers struggled with injuries and noise, losing a home game to the Seahawks due to turnovers and a missed field goal in overtime and then losing to the Ravens because of some misfortune on fourth down. They then beat the Cardinals in a couple of close games and needed a couple of third-and-very-long conversions in one drive to knock the Rams out of the playoffs in Week 16. They finally secured the NFC West title by tackling tight end Jacob Hollister at the 1-yard line on the season’s final play.

The teams' first-round byes proved to be fruitful (if uninteresting), as they became the seventh consecutive pair of Super Bowl participants to have earned the right to watch on the first Sunday of January. The 49ers never trailed during their two playoff games, while Kansas City had to overcome two double-digit home deficits to bring the Lamar Hunt Trophy back to its original home. 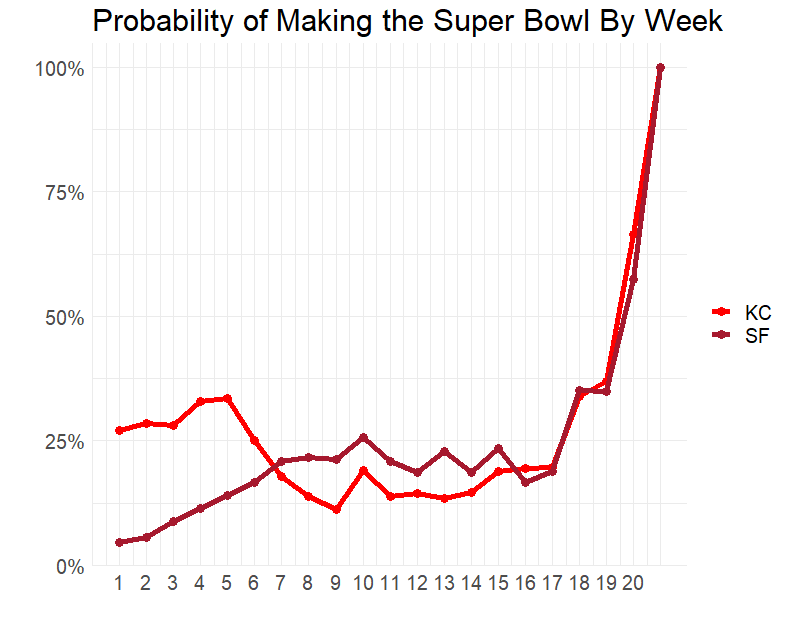 We knew that the Chiefs had a good offense going into 2019. After all, it was set to be run by the defending league MVP Patrick Mahomes and a stable of great receivers, all while guided by one of the league’s best in Andy Reid. The 49ers, on the other hand, increased in stature from an efficiency standpoint after a slow start against Tampa Bay and finished the regular season ranked seventh among offenses in EPA per play.

It will probably come as a surprise to most, but the 49ers actually led the entire league in PFF receiving grades, thanks in large part to George Kittle and the emergence of rookie Deebo Samuel. On the other side, the Chiefs' team receiving grade finished second among AFC teams, as did their EPA per pass play mark. 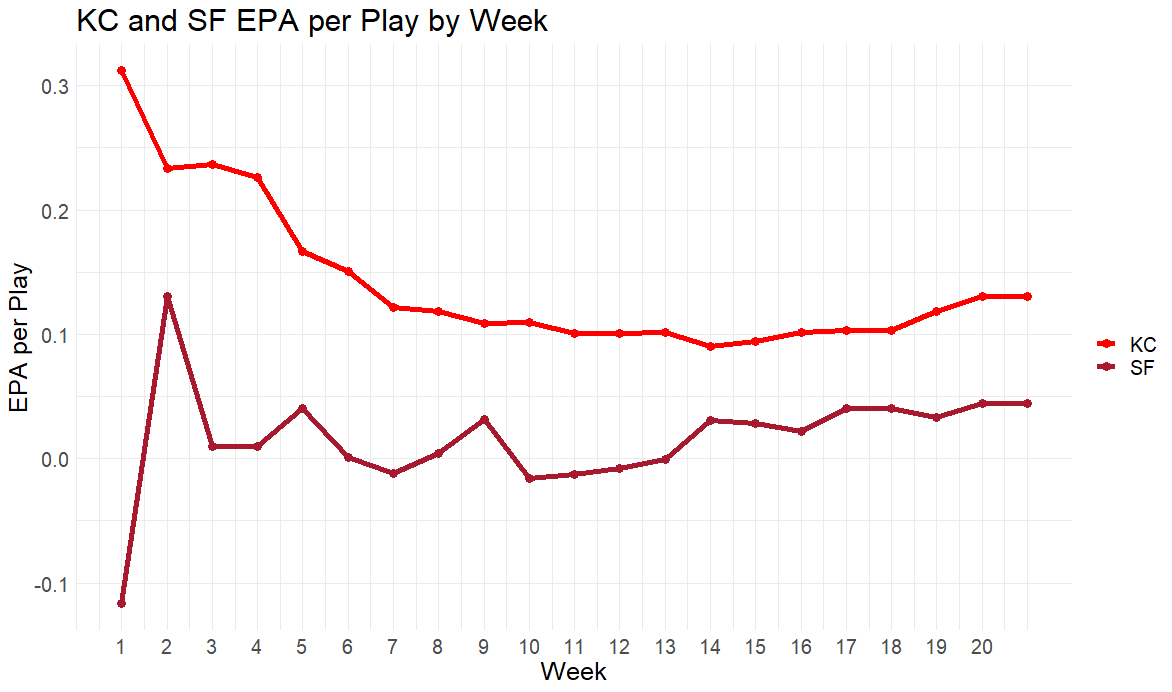 On the defensive side of the ball, questions were aplenty going into the season. After having squandered an opportunity to go to the Super Bowl last year because they could not get a stop on third down against the Patriots, the Chiefs acquired Tyrann Mathieu, Frank Clark and Juan Thornhill, and they eventually reaped the benefits under new defensive coordinator Steve Spagnuolo, finishing 18th in the NFL in EPA allowed per play and finishing in the top 10 down the stretch of the season.

After a low-key good year in 2018 (eighth in yards per play allowed), the Niners got off to a hot start defensively in 2019, and while they got worse as the season progressed, the return of injured players to the team during the playoffs has paid dividends, as they have allowed only 30 points over their first two playoff games. They were the only team in the NFL with a top-four PFF grade in coverage and pass-rush; they finished first in the league in yards per play allowed, and they ranked sixth in the percentage of drives that yielded a turnover. 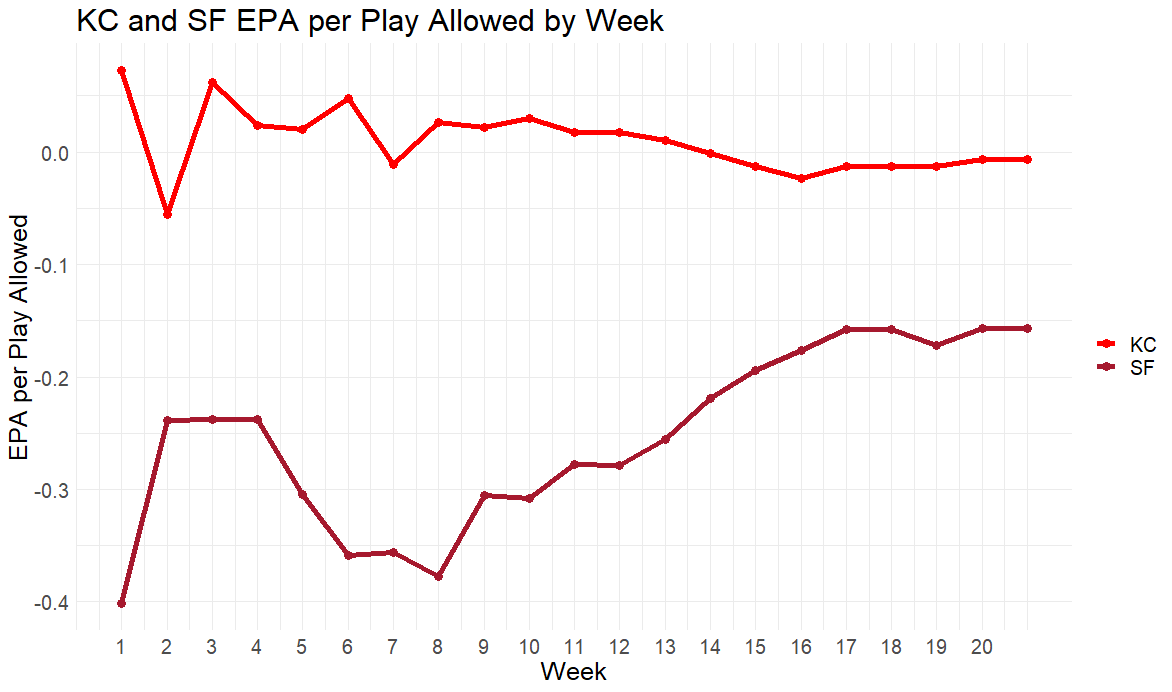 When it comes to who will win the Super Bowl in Miami, it’s more than likely going to come down to the play of the quarterback. In this particular matchup, there is no comparison. Patrick Mahomes and the Kansas City offense has been on a tear of late, while the Niners have largely been hiding Garoppolo behind a great running game and a defense. What’s interesting, though, when looking at how the two quarterbacks have played this season, is that Mahomes has had some valleys that correspond to the peaks from the young 49ers quarterback, but even in those instances, the two curves (looking at PFF grade per play) have never crossed.

Mahomes, after a flurry of value generated in the playoffs, is our second-highest player in terms of PFF WAR, while Garoppolo went into last week with the 18th-highest mark. So, when looking at handicapping the Super Bowl in two weeks, this is the lethal arrow in the Chiefs' quiver. 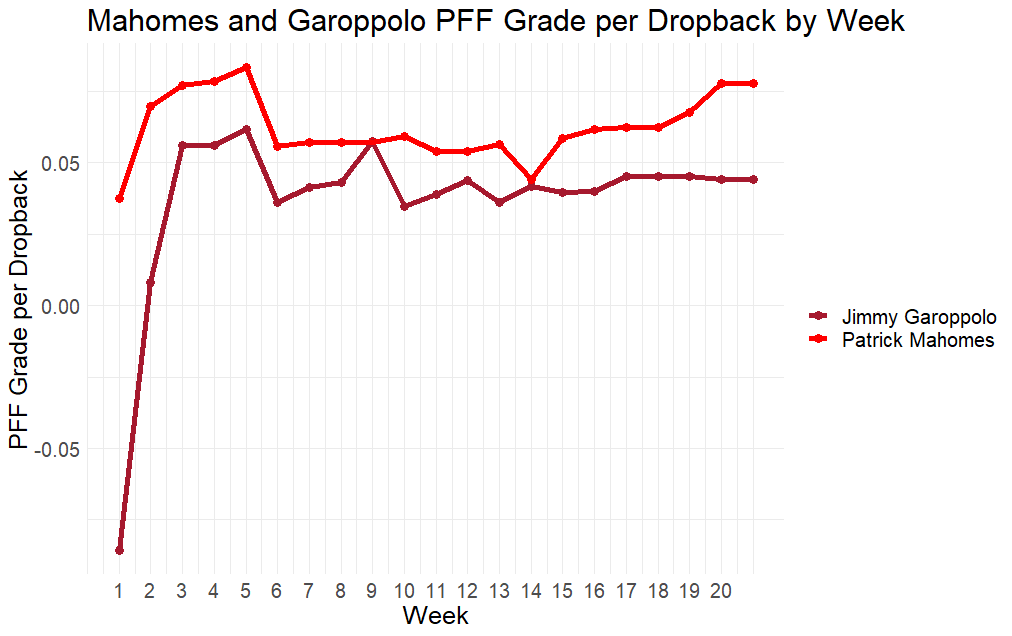 Super Bowl LIV is sure to be a great matchup. We have two brilliant head coaches in Reid and Kyle Shanahan; we have one of the league’s best offenses against one of the league’s best defenses, along with a matchup between the limited (but effective) San Francisco offense and an improving (but imperfect) Kansas City defense. After a 2019 season where many things were unpredictable — and there were many questions about which teams were real and fake — we get two deserving teams in what is currently handicapped as a close game in Miami. Sign us up.