The 2018 season presented some intriguing storylines for the NFC West. Would the Los Angeles Rams be able to avoid the regression that generally plagues second-year pop-up teams? Would the Seattle Seahawks curb their multiple-year descent and hold off the upstart San Francisco 49ers and make the playoffs in a stacked NFC? How would the Arizona Cardinals fare with a new head coach and quarterback?

Unfortunately for the Cardinals, they have to answer that last question again, but for the Rams and the Seahawks, you could not have asked for a better outcome in 2018. The Rams’ roster led the NFL in cumulative wins above replacement (WAR) a season ago, boasting a collection of talent that includes the league’s best player in Aaron Donald and a quarterback in Jared Goff that continues to improve each year. Seattle, while maddening to their fan base with their turn away from efficient play calling on offense and the loss of several players’ snaps of brilliance on defense, won 10 regular-season games on the back of Russell Wilson’s third-down heroics, returning to the playoffs for the first time since 2016. Jimmy Garopollo’s injury derailed the 49ers’ season, but Kyle Shanahan’s ability to generate value offensively from C.J. Beathard and Nick Mullens gives bay area fans hope for 2019.

As we do each offseason, we’ve simulated the 2019 season 10,000 times to get a distribution of outcomes that represents our predictions for each team. The simulations take into account scheduling factors (bye weeks, weather, etc.) as well as each team’s strength in each facet of the game of football. Team strengths are also simulated to mimic season-long improvement for good teams and decline for poor teams. For example, in a universe where the Buffalo Bills somehow get to 12 wins, it’s likely that our preseason rating of Josh Allen is lower than that of the player he becomes in that universe. Our model accounts for this possible trajectory as well as changes made between now and Week 1. Enjoy!

Probability of Winning the Super Bowl 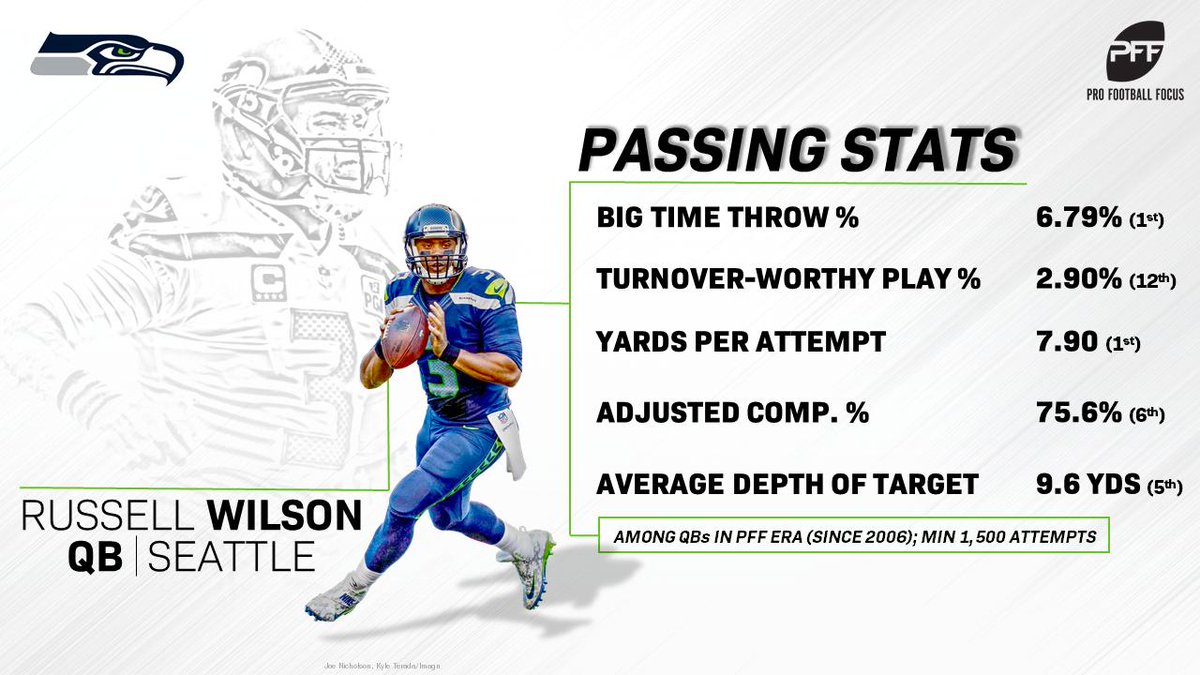 The Seahawks may employ the most run-heavy offense in the NFL, but they also quite literally employ the most valuable asset in the NFC West at quarterback. Last season, the Seahawks ran more on 2nd and 8+ than any other team. This is a decision that is massively sub-optimal from a conversion and drive success standpoint; drives with a 2nd and long play that is a run resulted in a touchdown three percent less often than drives with 2nd and longs that were all pass plays. And yes, I know what you’re thinking, the Seahawks were not way better at running on those plays than the average NFL team ranking 18th in yards per 2nd and long rush and increasing their chance of scoring next at the 16th-best rate on those runs. Yet Wilson is so brilliant that this strategy didn’t really rear its ugly head until the tournament where the Seahawks fell to the Dallas Cowboys‘ potent aerial attack. Wilson was absolutely brilliant on 3rd downs last season, leading the league in passer rating and big-time throws both of which are not particularly consistent for quarterbacks from season to season as is 3rd-down play in general.

Wilson has mastered the big-time throw, making them at a higher rate than any other quarterback over the last three seasons while also ranking third in PFF grade from a clean pocket behind only Tom Brady and Andrew Luck during this span. Regardless of the peaks and valleys that the rest of the team goes through they will always have a chance in any game and any division because of the play of Wilson. 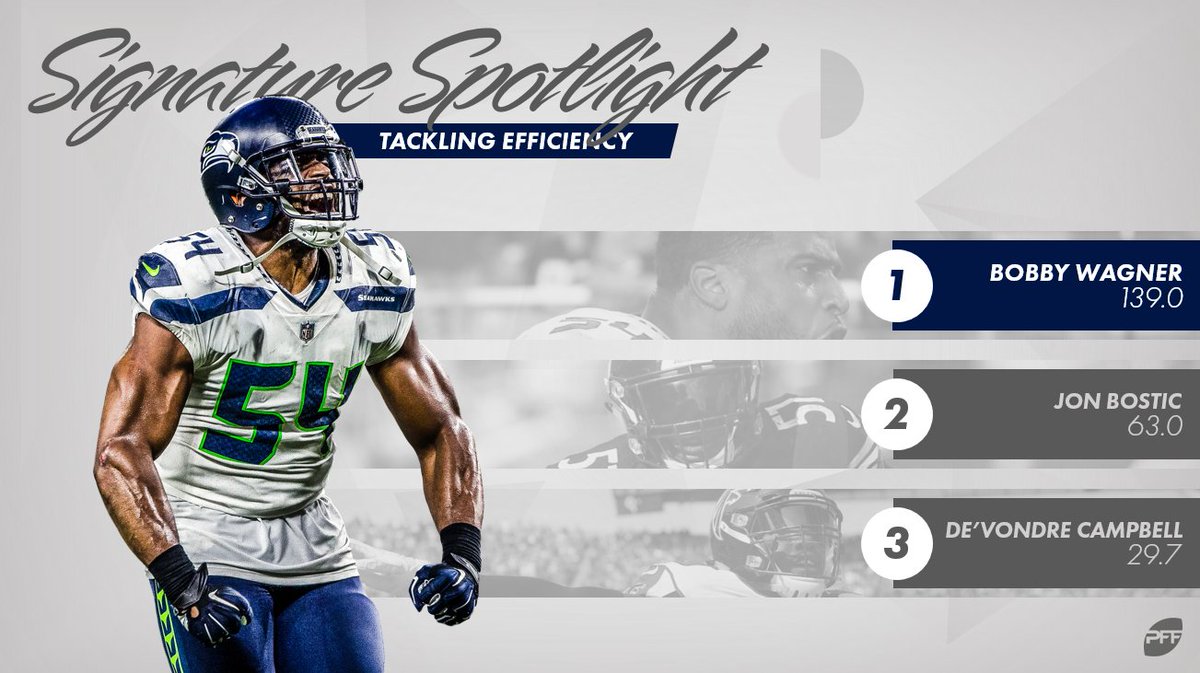 While Donald is likely the best player in the NFL, what a player like Bobby Wagner does is more valuable play-for-play in the modern NFL. Only 13 off-ball linebackers saw more than the 70 targets Wagner saw in coverage last year, but only one of those players gave up fewer yards into said coverage than Wagner’s 530 and none gave up a passer rating worse than the 86.0 or a yards after the catch total less than the 288 the Seahawks star linebacker allowed.

Despite being put in space repeatedly, Wagner missed only one tackle all season (none in the passing game), leading his position group in our tackling efficiency metric.  He accumulated 40 “stops” in addition to this steadiness and remains one of the reasons we cannot in good conscience count Seattle out of the race in the NFC despite the losses of Earl Thomas, Frank Clark and Doug Baldwin this offseason. 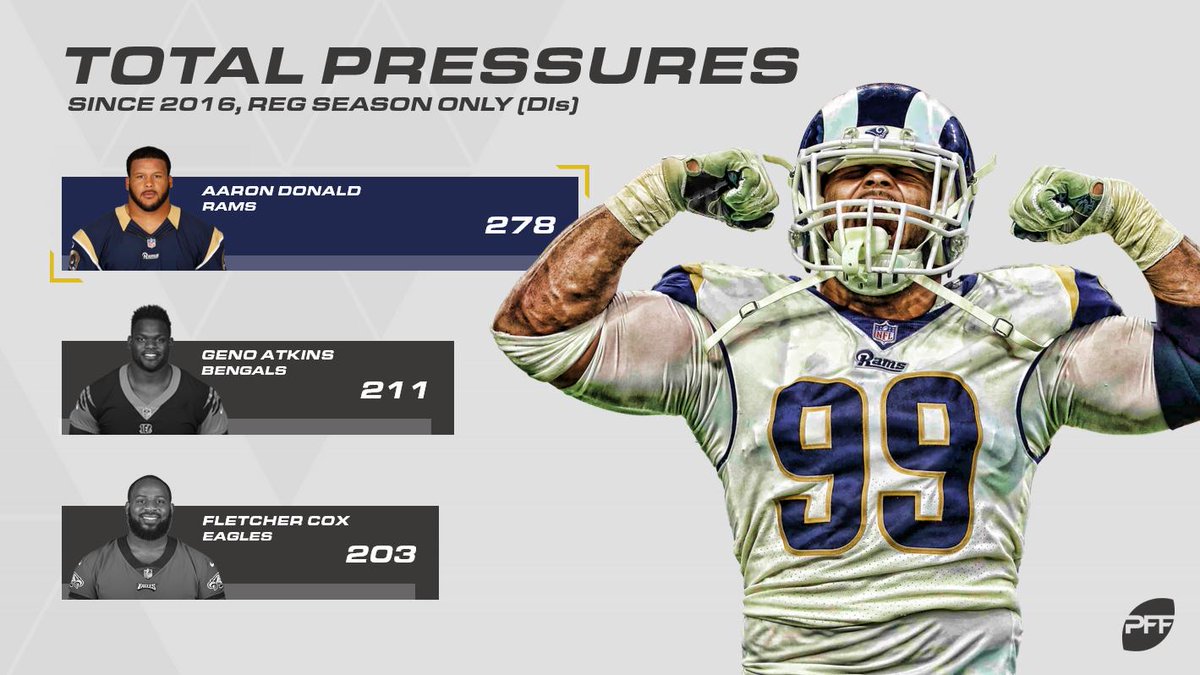 Donald has played the game of football about as well as it can be played over the course of his young career and last season was certainly no exception, as he earned the highest PFF grade and led all defensive players with 115 quarterback pressures (the only player to clear 100). Over the last three seasons, Donald has 45 more pressures than the next closest pass-rusher (Mack) and has a pass-rush win rate of 24%, which is 2.3% ahead of second-place Joey Bosa (larger than the gap between Bosa and the sixth-ranked player (Mack).

So why is Donald not ahead of Wagner?  First off, Wagner is a phenomenal player who does his job at just about as high a level as Donald. The kicker is that Wagner provides many of his best play at a more important point in the play: covering the player to whom the ball is thrown. As we’ve written about before both coverage and pass-rush are important components of winning football games, but coverage reigns supreme and when measuring the value of a player this is taken into consideration. Donald ranking this high as a player who is neither throwing, catching or covering the ball is a feat to be admired. Aaron Donald is an absolute monster. Period.