NFL scores and recaps for every Week 14 game

PFF broke down the numbers immediately after every NFL Week 14 game, including scores, rookie standouts, offensive line performances and more.

Offensive spotlight: In just his third day as a Ram, Mayfield completed 63% of his passes for 230 yards and a touchdown, which ended up being the game-winner to Van Jefferson with nine seconds left.

Before that touchdown, Mayfield led a 98-yard drive with only 1:35 left and no timeouts. His 59.9 grade on first review showed he has work to do, but the magic at the end of the game should have Rams fans excited for these final four games.

Defensive spotlight: Without Aaron Donald, Greg Gaines dominated for the Rams. His 90.5 grade on first review would be the highest of his four-year career so far. He finished with three pressures on 22 pass-rushing snaps. Gaines also had three run-defense stops and a tackle for loss. 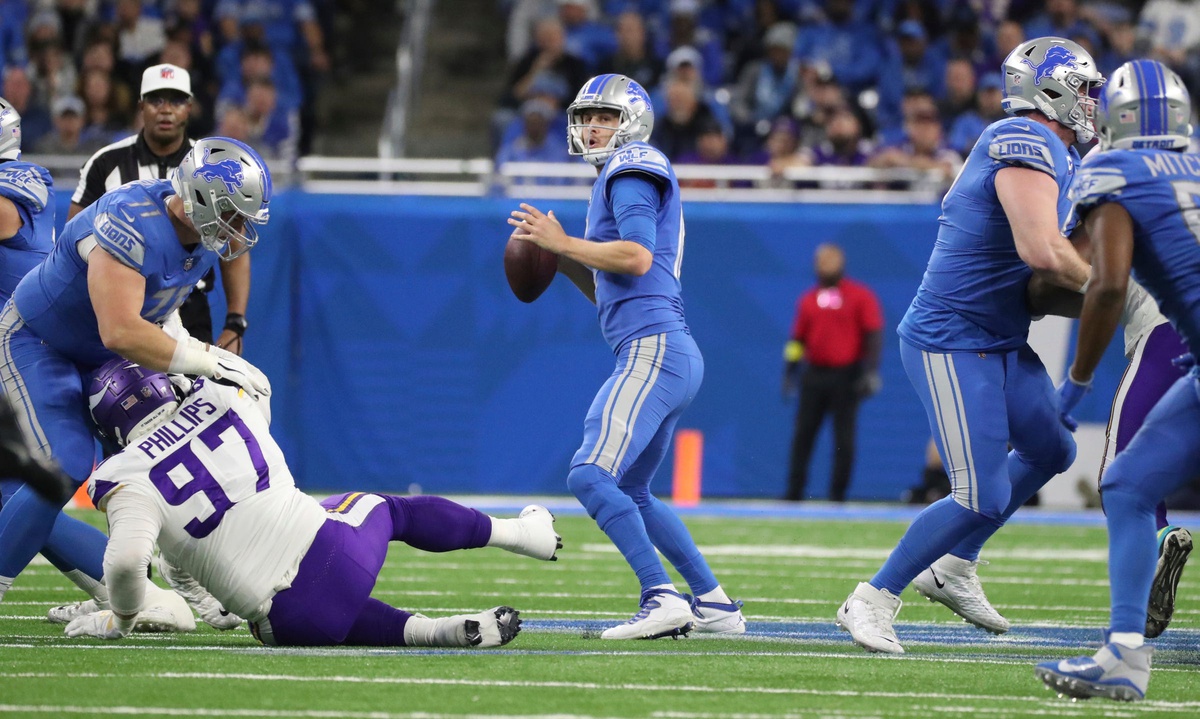 Offensive spotlight: Jared Goff had an outstanding game for the Lions and carved up the Minnesota defense. He completed 27-of-39 attempts for 330 yards and three touchdowns. He averaged 8.5 yards per attempt and had an adjusted completion rate of 90% on third down.

Defensive spotlight: Minnesota’s defense was a step behind Detroit’s offense all game long, giving up over 400 yards of offense and being suckered on key downs all game. They had Goff under pressure on just 23% of his dropbacks as a unit.

Offensive spotlight: J.K. Dobbins‘ return provided a major spark to the Ravens' rushing attack, with the former Ohio State standout the source of all the yards on their only touchdown drive of the game. Dobbins carried the ball 15 times for 120 yards, with 49 of those yards coming after contact. Meanwhile, Gus Edwards was able to cause some problems in the reserve role, with 49 of his 66 yards coming after contact.

Defensive spotlight: The Ravens traded for linebacker Roquan Smith before the trade deadline, and he has been a huge boost to their defense since his arrival. His presence seems to have helped fellow linebacker Patrick Queen to the best run of his career, too. In this game, they both had an interception, and neither missed any tackles.

Offensive spotlight: QB Deshaun Watson didn't look much better than he did last week, completing 26-of-42 attempts for 276 yards and a touchdown and throwing a backbreaking interception late in the game. He gained just 6.6 yards per attempt.

Defensive spotlight: Cincinnati’s defense did a number on the Browns' run game, with D.J. Reader looking back to his best. Browns RB Nick Chubb averaged just 2.4 yards per attempt, and without that foundation, the Browns' offense was toothless.

Offensive spotlight: Offense was difficult to come by in the rough conditions in Buffalo on Sunday. If there was any silver lining, it was that Josh Allen protected the ball better than he has in some time. Since Week 8, Allen leads the NFL with 14 turnover-worthy plays. On Sunday against a vaunted Jets defense, though, Allen didn’t have a single one.

Defensive spotlight: With Von Miller down for the rest of the season, second-year defensive end Gregory Rousseau had no problem picking up the slack against the Jets. The former first-round pick tallied four pressures on 33 pass-rushing snaps, including two sacks. Teammate A.J. Epenesa put together one of his better games this season, as well, with a sack and another hurry.

Offensive spotlight: That was as shaky a performance as we’ve seen from Dak Prescott since Week 1. He finished 24-of-39 for 284 yards with a score and two picks. He completed only six passes targeted more than 10 yards downfield, as the Texan's defense did a good job putting a cap on the Cowboys' passing game.

Defensive spotlight: Not often do you leave a game saying Leighton Vander Esch was the best Cowboys defender, but that was the case Sunday. He led all players in the game with 14 tackles and seven stops. He was a man possessed against the Texans' ground attack. 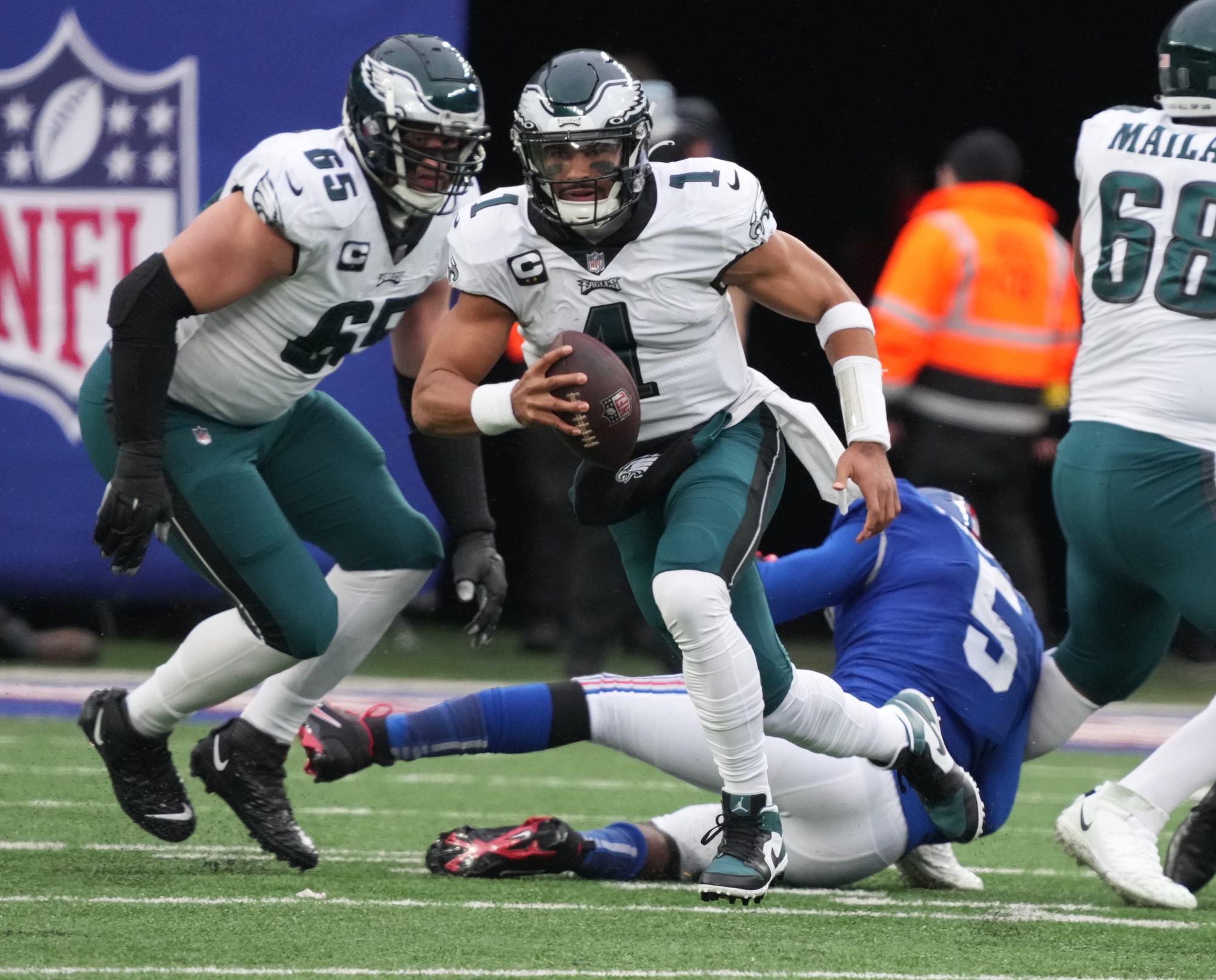 Offensive spotlight: Eagles quarterback Jalen Hurts was fantastic in this contest — as he has been all season. He finished the game 21-for-31 passing with 217 passing yards, two touchdowns and zero interceptions, along with 77 rushing yards on seven carries for another touchdown. Hurts had four big-time throws to zero turnover-worthy plays on the day, continuing his MVP campaign.

Defensive spotlight: Eagles pass-rusher Brandon Graham finished the game with a PFF grade of 91.6 on first review, the highest for either squad. He racked up four pressures and three sacks with a pass-rush win percentage of 22.2%. He also had a stop and an additional tackle for loss in run defense.

Offensive spotlight: Evan Engram posted a career-high 162 receiving yards and the first multi-touchdown game of his career in a massive performance against the Titans. Engram was the focal point of Jacksonville’s passing offense, targeted on a game-high 15 of his 35 routes (43%). And it didn’t matter who was in coverage. Engram recorded a catch against seven different Tennessee defenders on initial review. It was the kind of breakout performance Jacksonville had been hoping for after signing the talented former first-round pick in free agency this past offseason.

Defensive spotlight: Tennessee entered Week 14 with the league’s best third-down defense, allowing a conversion on just 31% of opposing offenses' third-down opportunities. They allowed Jacksonville to convert seven of 14 such chances in this game (including a Terrance Mitchell defensive pass interference that won’t appear in the official numbers) and 5-of-7 third downs in the second and third quarters when the Jaguars claimed and extended their lead.

Offensive spotlight: Until this week, Jerry Jeudy had six receiving touchdowns in his career. The third-year receiver from Alabama scored half of that just against the Chiefs on Sunday.

Jeudy caught all eight of his targets for 73 yards and three touchdowns, good for a 144.3 passer rating when targeted.

Defensive spotlight: Willie Gay Jr. had one of his best games yet. The Chiefs linebacker earned an 82.9 PFF grade on first review, which would be the fifth-best single-game mark of his three-year career. In the second quarter, Gay intercepted Russell Wilson and returned it 47 yards for a pick-six. He also had an additional three coverage stops in the game. 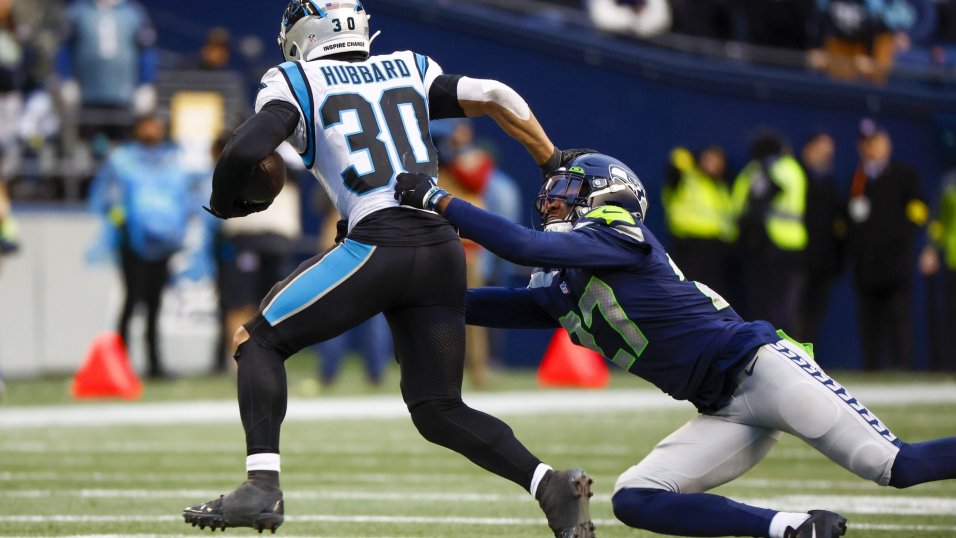 Offensive spotlight: Running back Chuba Hubbard ran the ball 14 times for 74 yards, one touchdown and five first downs. Forty-eight of his rushing yards came after contact, and he forced four missed tackles.

Defensive spotlight: It was a mixed night for Panthers CB Jaycee Horn, who allowed four catches for 66 yards but also grabbed an interception and a forced incompletion. He ended the game with a 38.5 passer rating allowed.

Offensive spotlight: Christian McCaffrey has dominated since he was traded to the 49ers. The former Carolina Panther ran for 119 yards and a touchdown against the Buccaneers, with 71 yards coming after contact.

It wouldn’t be a CMC masterclass without some receiving production, too, and he caught two passes for 34 yards and a touchdown.

Defensive spotlight: Fred Warner gets all the love in the 49ers linebacking corps, and deservedly so, but Dre Greenlaw was the star on Sunday. Greenlaw earned a 90.5 grade on first review, which would be the second-highest of his four-year career. He picked off Brady in the third quarter and allowed a 5.7 passer rating when targeted. 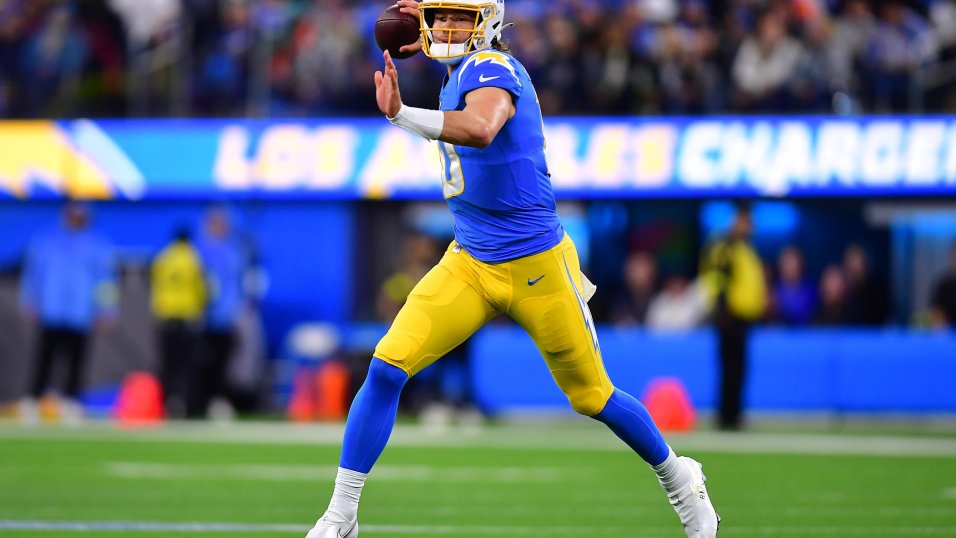 Offensive Spotlight: It was the Justin Herbert show in SoFi Stadium. He was as composed as can be, withstanding consistent pressure, hitting the quick underneath concepts accurately and coming up with a big throw when needed. Herbert completed 13-of-20 passes under pressure for 185 yards, and he didn’t record a single turnover-worthy play for the game.

Defensive Spotlight: Every linebacker and defensive back — along with the coaching staff — for the Chargers should get a game ball in this one. They disrupted the explosive Miami wide receivers in press coverage and eliminated the middle of the field in the intermediate and deep levels. Dolphins quarterback Tua Tagovailoa completed just two passes over 10 yards downfield inside the numbers. For reference, he had been completing seven such passes per game since returning from injury in Week 7. 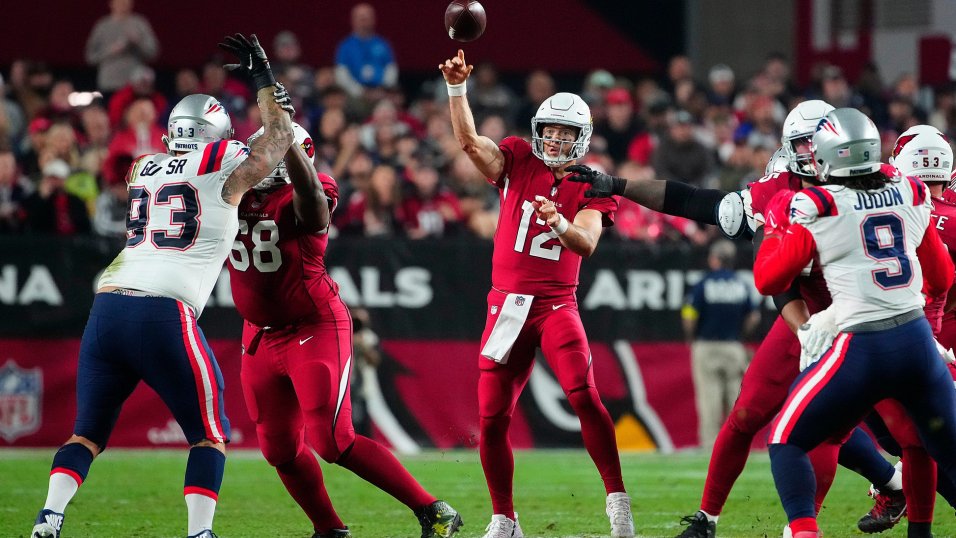 Offensive spotlight: The biggest story of this game happened on just the third play, as Cardinals quarterback Kyler Murray suffered a non-contact knee injury after scrambling for three yards. From early reports, it doesn’t look good.

Colt McCoy relieved Murray and finished with a 64.7 grade on first review in the loss.

Defensive spotlight: Jahlani Tavai has been on the best stretch of his career so far. The Patriots linebacker currently has an 84.2 grade on first review, which would be his third 80-plus grade in five weeks. Those are also the only games of his four-year career where he’s graded above 80.

Tavai forced two incompletions on the night and also came up with a coverage stop and five tackles.