PFF projections for the second round of the playoffs

What an exciting week of football. Three underdogs won outright, while the third took their opponent to overtime on Saturday night in Houston. Lower seeds winning did not go unnoticed by the teams with a bye, as each team plays a lower seed than they would have had all the favorites won during the NFL's wild-card round.

While round one was amazing, the divisional round has the potential to be even better. In this article, we look at each team’s chances of winning the Super Bowl using the machine learning capabilities of AWS. We are a little lower on the Ravens than the consensus is, and we give an explanation as to why.

The Ravens maintain their status as the favorites through their bye, but in getting a date with the Tennessee Titans rather than Houston or Buffalo, they actually draw a tougher matchup in our eyes (Tennessee is our eighth-rated team in terms of PFFELO, while Houston and Buffalo are ninth and 13th, respectively). The Ravens still have well over a 70% chance to win this week against the Titans and roughly a 60% chance to win the AFC Championship game, should they get there. This is as good a path as anyone has in the AFC, but the Kansas City Chiefs are nipping at their heels now that the Patriots have been disposed of, making for a great race to the finish in the first post-Brady/Manning AFC. 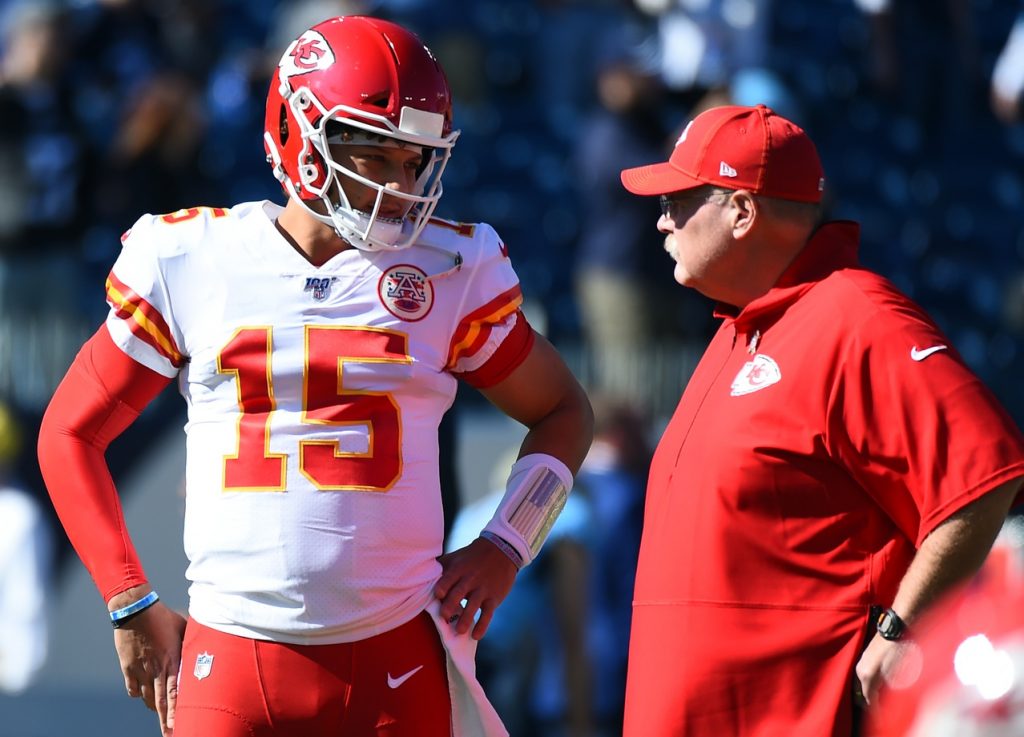 With the Tennessee Titans beating the defending champs last week, the Chiefs get the Texans in the second round of the playoffs, and with that have increased their odds to win the Super Bowl from 19.0% last week to 22.3% this week. They, like the Ravens, are well over a 70% chance to avenge their Week 6 home loss at the hands of the Texans and make it to the AFC title game, where we give them a coin flip’s chance to advance against either the Ravens or the Titans. The Chiefs are our third-ranked team in terms of ELO, about eight points better than the average NFL team on a neutral field.

The ‘Niners drew a game Minnesota team in round two — a Minnesota team that we have ranked higher than either of the two teams the 49ers would have faced had New Orleans taken care of business last week. However, since New Orleans (our second-highest-ranked team) is out of the bracket, the NFC side is far weaker as a whole, making San Francisco's odds of taking the NFC — and the odds of eventually winning the Super Bowl — slightly higher than last week. A huge question remains as to how Jimmy Garoppolo, arguably the least accomplished quarterback left in the tournament, can guide a very talented one seed to their first Super Bowl since February of 2013.

The Packers probably scored the biggest victory of this past weekend, avoiding a 13-3 Saints team that could have very well been favored against them in the divisional round. They have a weaker offense than the Seahawks do on balance, and defense does not matter as much as people think, but they are still favored to win the game on Sunday at Lambeau Field and would be favorites again if Minnesota were to knock off the 49ers on Saturday. Their probability of winning the Super Bowl went up almost 2% as a result of last week’s games but is fourth among bye teams in large part due to the fact that Aaron Rodgers has performed as one of the weaker quarterbacks remaining in the playoffs, with a bottom-half-of-the-league yards per attempt average this season. 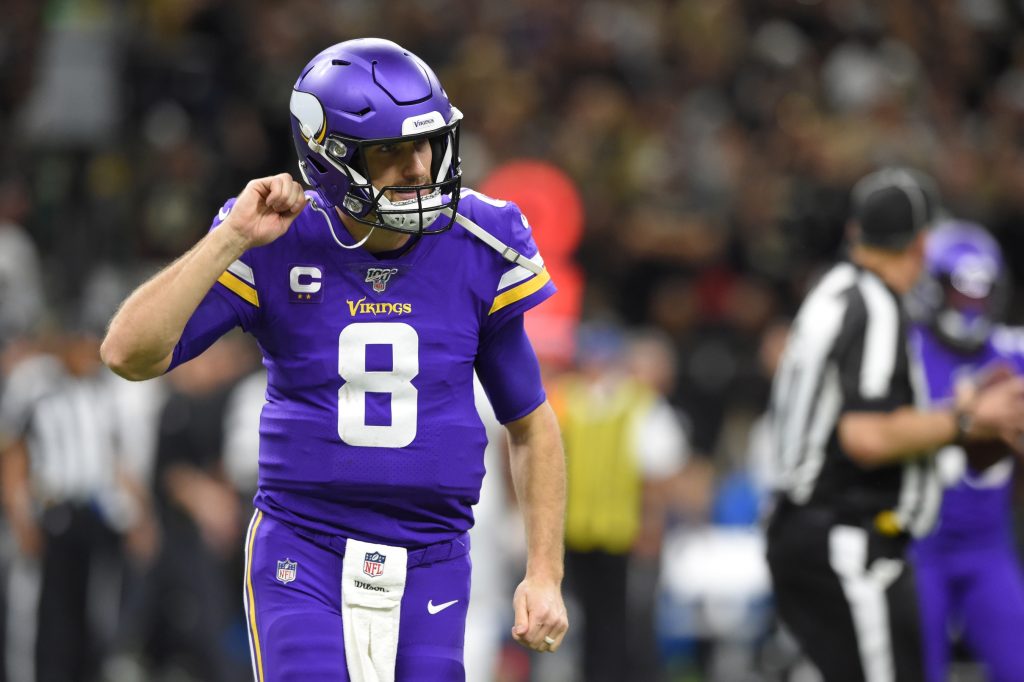 Beating the second-best team in the NFL on the road in the playoffs will significantly increase your underlying power metrics, which were already good for Minnesota (seventh in the NFL, five points better than the average NFL team). Kirk Cousins is a top-five NFL player in terms of PFF WAR and played like it against the Saints, completing two of his five passes more than 20 yards in the air, including a brilliant pass to Adam Thielen to set up his game-winning fade to Kyle Rudolph in overtime. We are a little higher on their chances to win in San Francisco than others, noting the similarity in the two teams' approach to offensive football, making Mike Zimmer’s prowess as a defensive play-caller ever the more valuable on Saturday.

No 12-win team in recent memory has been more scoffed at than the Seattle Seahawks, who, with the aid of yet another injury by a key Philadelphia Eagles player, went on the road and in the playoffs for only the third time under Pete Carroll. Despite some recent offensive struggles, Russell Wilson continues to be the league’s most valuable player by our metrics, and while his support has been a problem at times, rookie receiver D.K. Metcalf has emerged as a bona fide weapon in the passing game of late (1.69 yards per route run as a rookie). Their utter refusal to use more than four defensive backs (less than 10% of all plays) interestingly might be ok, at least in the NFC playoffs, with the Packers weak at receiver, and San Francisco/Minnesota employing league-leading rates of 12 and 21 personnel groupings.

The one favorite that made it out of round one did so only with some help from their opponent and some brilliant play by Deshaun Watson in the second half. They go into Kansas City this week with the worst defense among playoff teams and are set to face an offense that has been surging of late. For Watson & Co. to keep up with the Chiefs, he’ll have to avoid the pressure rate he dealt with last week against the Bills (50% pressure rate, 35% sack rate). Luckily for him, the Chiefs are stronger on the back end than they are in the front seven, and Will Fuller is (finally) likely to return this week. If Watson, DeAndre Hopkins and Fuller get hot, it might be harder for the Chiefs than their pre-game win probability would suggest, likely leading to another rematch between the Texans and the Ravens, which did not end well the first time.

The Titans were very impressive in a 20-13 win in Foxboro, as they became the first team since the Ravens in 2009 to defeat the Pats in the first round of the playoffs. Derrick Henry got a lot of the headlines for generating 142 yards after contact and a touchdown. Their defense — which is one of the worst in the NFL at generating a pass-rush — and their banged-up secondary was able to hold the Patriots and Tom Brady to 13 points and only 6.3 yards per clean-pocket passing attempt. Defense is largely the product of who you play on the other side of the ball, so while their offense should be good enough to score some points against the Ravens Saturday night, it’s going to be pretty difficult for them to slow down the Ravens. If they do, though, they will be a tough out against (likely) a Chiefs team that they’ve beaten four times in a row.