Examining the value of the backup quarterback position in the NFL

The backup quarterback position has taken on quite an evolution in the NFL. Far from the days when the San Francisco 49ers were able to carry two Hall of Famers in Joe Montana and Steve Young and the days when “quarterback controversies” and competitions existed well into August and throughout the regular season, most NFL teams have an established starter and put a considerable number of eggs in that basket each season in the form of salary and/or draft capital.

Even the likes of Brad Johnson, Rich Gannon, Matt Hasselbeck, Aaron Brooks, Tony Romo and Jake Delhomme, to name a few, were once developmental guys nipping at the heels of established, but vulnerable, veterans ahead of them before becoming the unquestioned franchise quarterback — for whom the existence of a starter-worthy backup is considered a threat not worth bringing in by some.

Be that as it may, a fair share of backup quarterbacks have made the most of their opportunities in the past few years, headlined by Nick Foles — who led the Philadelphia Eagles to a win over backup Case Keenum’s Minnesota Vikings in the NFC title game, before beating Tom Brady in Super Bowl LII. Ryan Tannehill, who opened 2019 as the Tennessee Titans‘ backup quarterback behind former first-round pick Marcus Mariota, earned more than two wins above replacement and led the league in a number of passing categories en route to the AFC Championship Game. Even Matt Moore, who went 1-1 in then-reigning MVP Patrick Mahomes’ stead, played a part in the Kansas City Chiefs earning a first-round bye in 2019 and an eventual Super Bowl title.

This season, the NFL backup quarterback situation (subject to change) is distributed as shown below, with exactly half of the league’s players at the position being veterans who have little-to-no chance of starting in the league again along with seven young players without the pedigree to be considered serious starting candidates. Furthermore, the Miami Dolphins and Los Angeles Chargers — with first-round quarterbacks waiting in the wings — have current starters in Ryan Fitzpatrick and Tyrod Taylor who are not serious, long-term options to continue doing so.

First-round picks waiting in the wings (3)

QBs who can be eventual starters (6)

To better understand various approaches to backup quarterbacks, I codified all of the backup quarterback situations in the PFF era (2006-2019) into four groups: rookie first-rounders, veterans (five years in the league or more), youngsters (four or fewer years in the league but not a rookie first-rounder) and special circumstances (think Andrew Luck in 2017 and 2019). While this doesn’t capture the whole of backup quarterback situations, it gets us in the right ballpark. The table below shows the average wins above replacement generated by non-starters in the different backup designations during the PFF era.

This is an interesting finding that suggests, at least in the aggregate, teams that opt for a veteran backup (if they are not going with a first-rounder as the backup initially or don’t have some Teddy Bridgewater calamity ruin their season) are doing better than teams that opt for a young, more developmental player at the backup position — especially per snap. There isn’t that much of a difference in terms of snaps played by the backup when the player is a veteran versus when he’s not, with some veterans playing a moderate amount of snaps and youngsters tasked with eventual big roles: 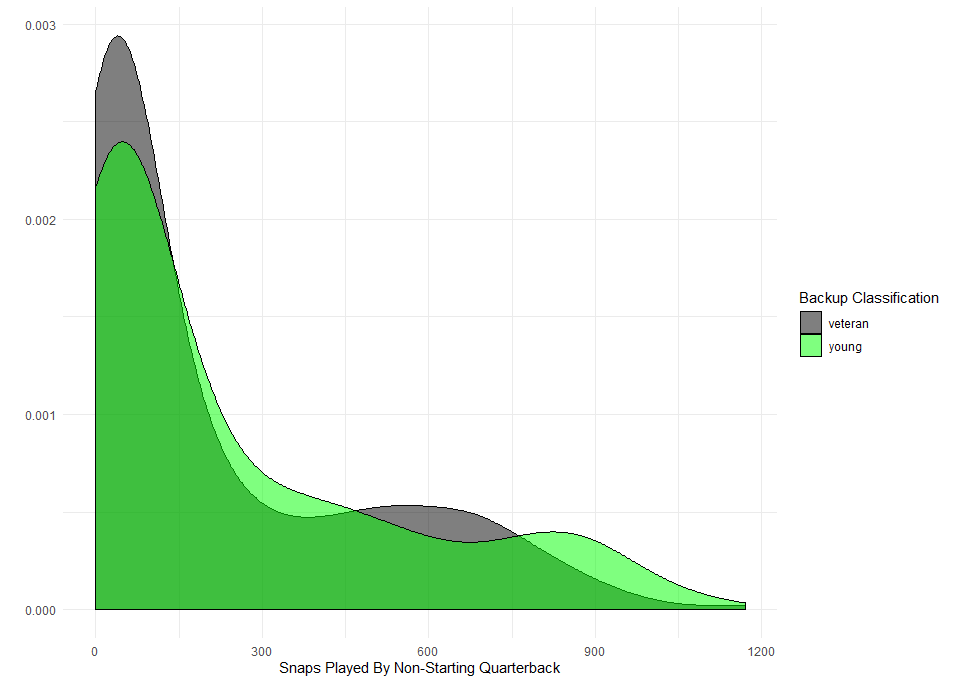 Thus, if opting for a veteran quarterback is the better option for teams when filling their backup quarterback role, how much should a team spend on the position to get a fair value if they go in that direction?

To help answer this question, I looked at salary data from our friends at Over The Cap to model the worth of a veteran backup quarterback's in-game value, with data spanning back to 2013. While there is a ton of noise, in many ways because the number of snaps a quarterback plays is dependent on things he cannot control, there is a very small, positive relationship between the amount of money paid to a veteran quarterback and the amount of WAR earned by that player over the course of the season: 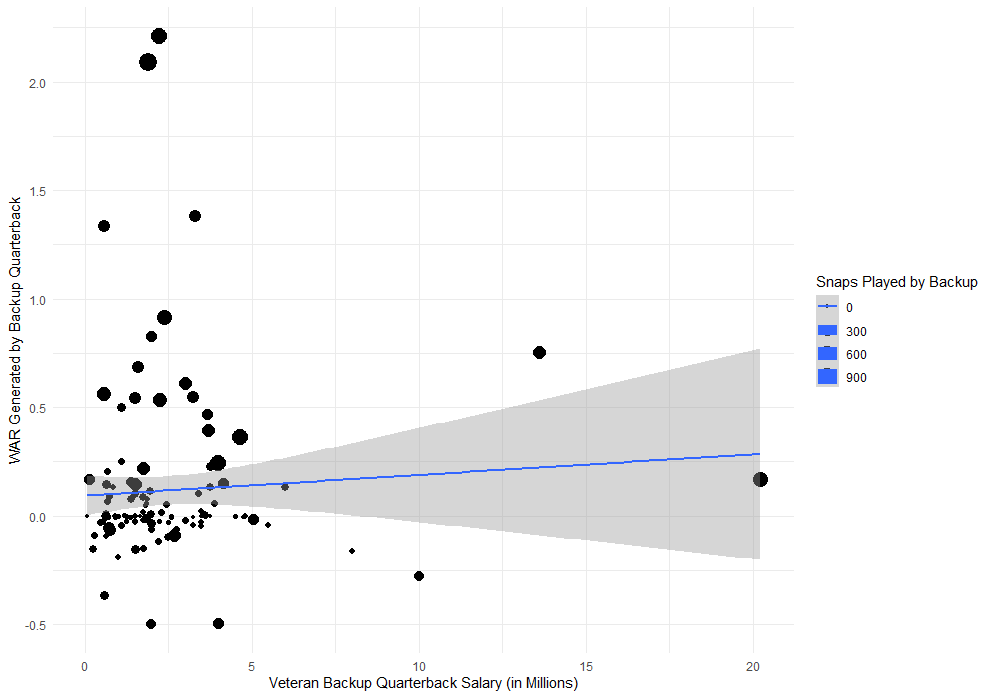 It is instructive to see where the negative outliers occur, and in this case, the worst veteran quarterback backup seasons are:

There doesn’t seem to be much rhyme or reason to what we’re getting in terms of bang for the buck at the veteran backup spot, except for the fact that a lot of value can be obtained for relatively cheap (with a cap hit of $2 million to $4 million). But like everything, this amount of money doesn’t guarantee greatness when that player is called upon.

The last thing I want to look at is the position as a whole. Maybe there is a chance that having a veteran backup who is paid more money enhances the entire QB room through experience and the like. But this does not appear to be the case:

Relationship Between All QB WAR and Backup QB Salary 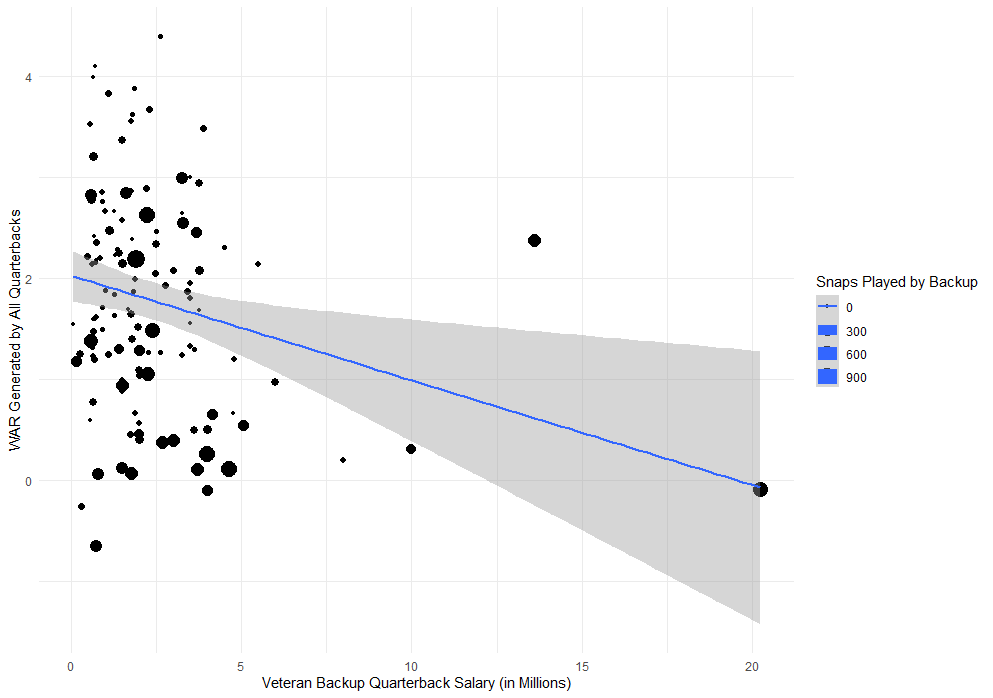 In general, the more money teams spend on the veteran backup, the less WAR the QB room generates. Some of this is wrapped up in the idea that the more you pay a veteran quarterback, the less you can pay your starter, as we still see the trend line when the variable is “percentage of QB salary taken up by the backup.” There are some outliers here, with Colin Kaepernick ($20 million cap hit in 2016), Nick Foles ($13.6 million in 2018) and Josh McCown ($10 million in 2018) possibly dragging down the trend line. If those players are removed, here is the resulting graph: 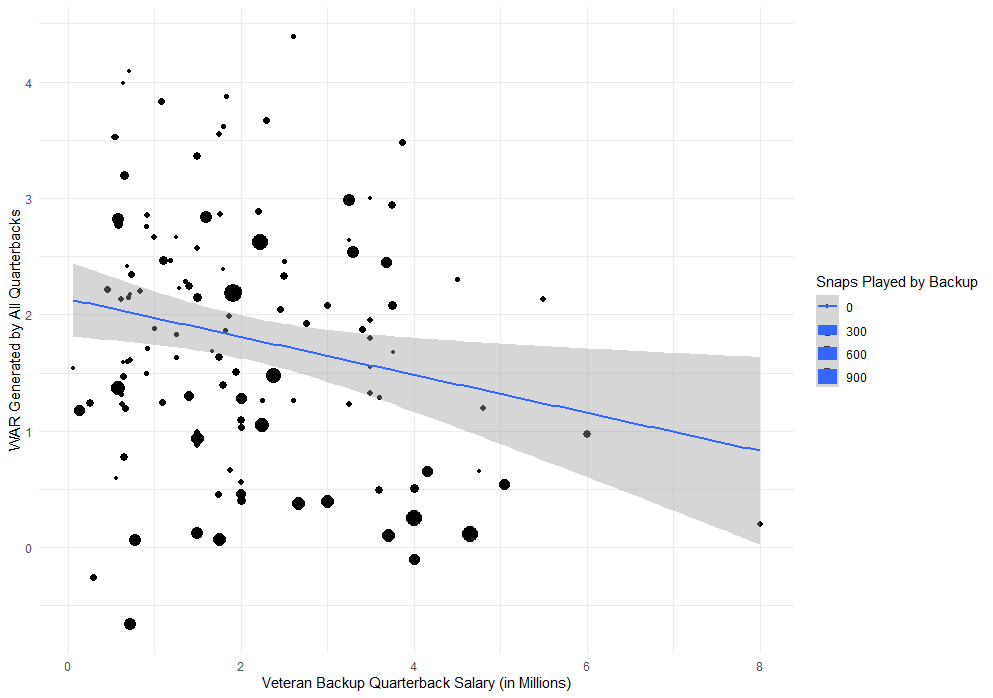 The trend line is still negative, suggesting that the dollars spent on a veteran backup are not being used on things that can help the quarterback position succeed (indirectly, in the way of support on the offensive or defensive side of the ball). What if we include only veteran quarterbacks who cost $3 million or less in terms of a cap hit? 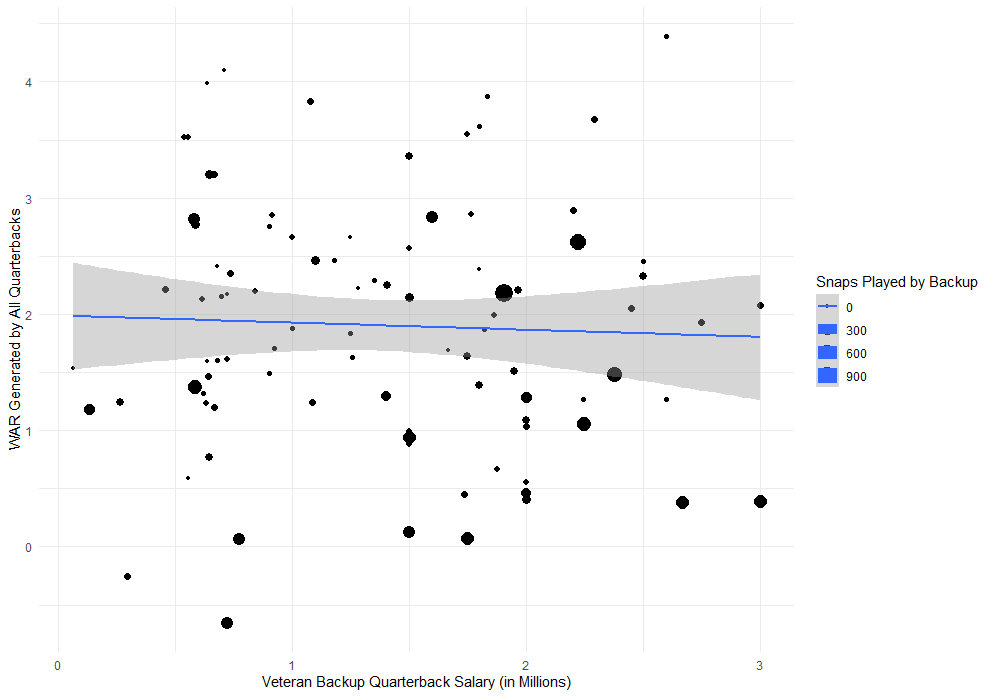 The relationship is far less pronounced than above but still slightly negative. Such a trend line is not seen if looking at young backups:

Relationship Between All QB WAR and Young Backup QB Salary 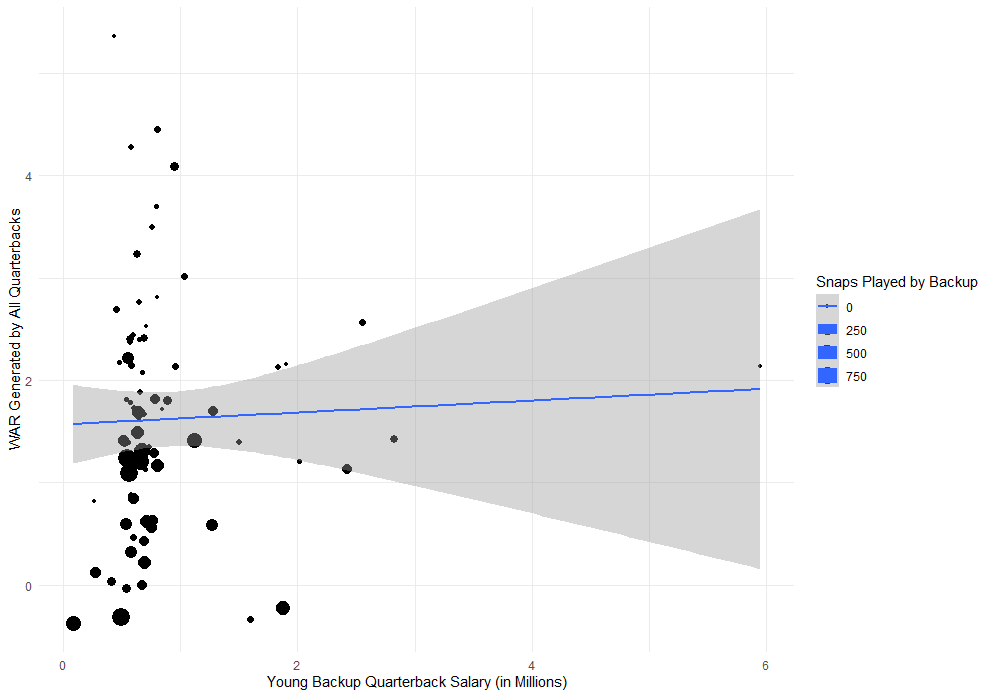 Notice that the more the backup plays, the worse the quarterback position does — but not so as a function of the salary, since most of the salaries are in the same window (with the higher salaries being younger quarterbacks who are picked early in the draft but not in the first round).

As with starting quarterbacks, the situation is more complicated than “pay your backup quarterback X amount per year and prosper.” However, a combination of noise (injury- and performance-wise), scarcity of resources and the correlation between the performance of the rest of the team and the amount spent on the (starting) quarterback, mean that there are diminishing returns to paying a veteran backup, with very little evidence that a cap hit of $4 million or more yields positive results.

So, veteran backups do produce more value in a vacuum than young backups (who aren’t high draft picks), but when value is assessed at the entire position, there are diminishing returns. Hence, if the veteran backup quarterback is the choice, there is little evidence that spending more than $2 million to $4 million in terms of a cap hit is warranted. Insurance is usually a negative expected value proposition (especially along very finite time horizons), and the quarterback position is no different. Be thrifty.