Per a report from NFL Media’s Ian Rapoport, the Baltimore Ravens and star tight end Mark Andrews have reached an agreement on a four-year, $56 million extension through 2025.

Sources: The #Ravens and Pro Bowl TE Mark Andrews have agreed to terms on a substantial extension, with Andrews getting a 4-year deal worth $56M. The $14M APY means he’ll make more money through 4 years than any other TE in the league. ???? ???? ????

The deal is good for $14 million per year, which ranks third among tight ends behind the San Francisco 49ers‘ George Kittle and the Kansas City Chiefs' Travis Kelce. However, the guarantees are very strong for Andrews, as he gets $37.6 million total guaranteed, per ESPN’s Jeremy Fowler, which slots in just behind Kittle at $40 million guaranteed but over one fewer year. The total guarantee accounting for 67% of the deal ($37.5M/$56M) is above Kittle at 53.33% ($40M/$75M). Kelce’s four-year deal for $57.25 million had just $27 million in total guarantees, which further illustrates the strength of Andrews’ terms.

This structure is in line with other recent big extensions for marquee Ravens players — left tackle Ronnie Stanley is a notable example. Stanley’s $19.75 million per year average ranks fourth among tackles, but his $70.866 million total guarantee and $64.116 million fully guaranteed at signing figures are both over $10 million more than the next highest tackle (the New Orleans Saints‘ Ryan Ramczyk received $60.2 million in total guarantees and $43 million in fully guaranteed at signing — second in both categories).

Ravens cornerback Marlon Humphrey also received $75 million in total guarantees, which is the most among cornerbacks.

Andrews is now set to potentially negotiate an extension or hit the market again before he turns 30 years old, putting him in line for a possible third big payday, which is not a given at the physically demanding tight end position that saw Rob Gronkowski initially retire at just 29 years old.

Andrews has been one of the league’s best tight ends since he was drafted in 2018, as evidenced by the graph below. 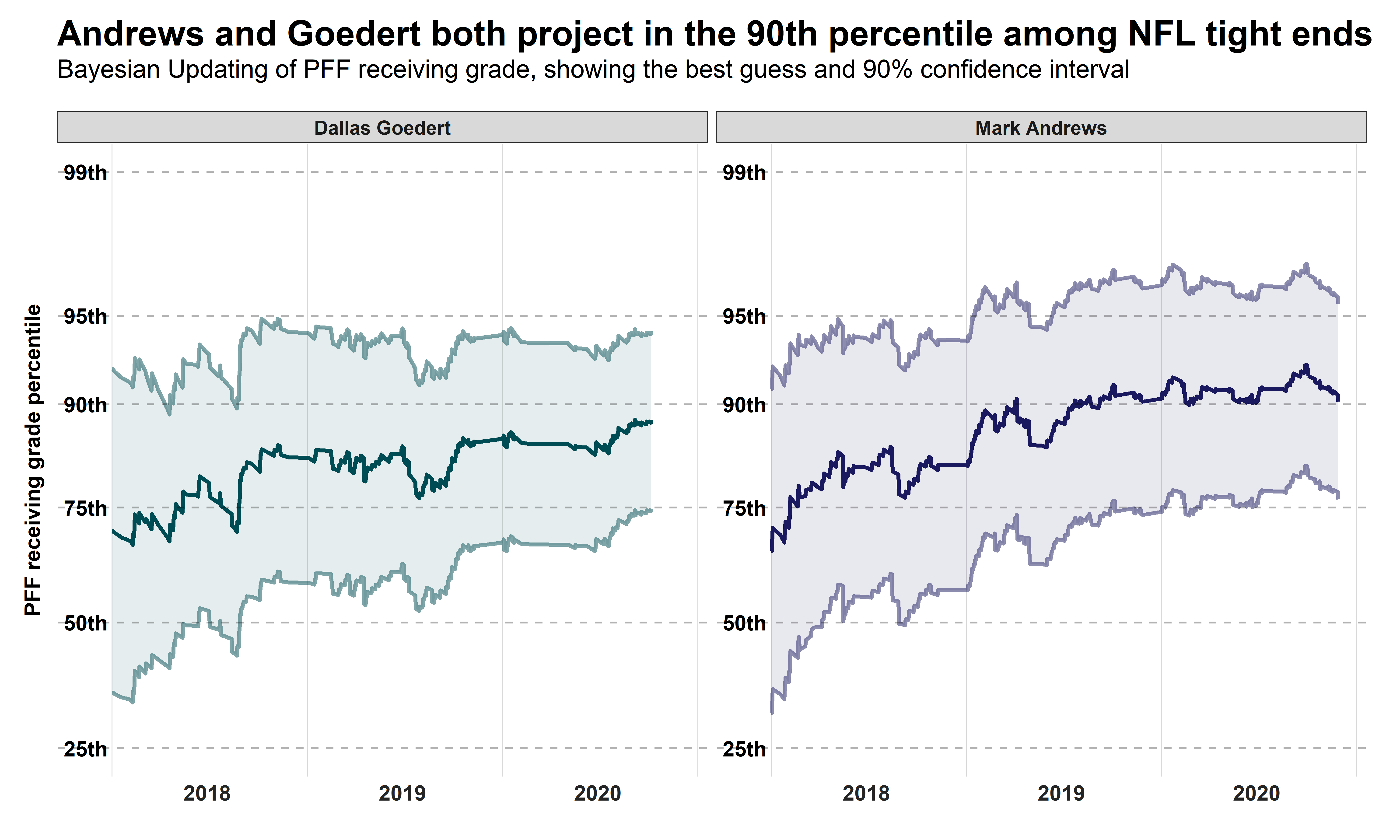 Fast rise to the top

Andrews’ ascension is a particularly impressive feat at a position with a notably slow learning curve, per PFF data scientist Timo Riske's research. The rookie season is a struggle for many tight ends attempting to adjust to NFL speed in the receiving game and NFL strength as a blocker while digesting a new playbook.

Andrews is held in high esteem across the NFL, checking in at No. 6 on PFF’s tight end rankings heading into the 2021 season and at No. 4 on an offseason ranking by NFL executives conducted by ESPN’s Jeremy Fowler.

Andrews is a legitimate downfield threat, posting an 11.1-yard average depth of target since 2018, which is tied for third among tight ends. Furthermore, he’s led the Ravens by a considerable margin in receptions (156 — next highest at 126), receiving yards (2,105 — next highest at 1,422) and contested catches (24 — next highest at 13) in his short but impressive tenure. While Andrews is known for his pass-catching prowess, he’s not a liability as a run-blocker by any means. Since 2018, Andrews’ rate of negatively graded plays as a run blocker is 4.4%, the best mark among all tight ends with at least 100 run-blocking snaps. His 71.1 run-blocking grade ranks 12th.

One could certainly still argue that the tight end position market lags too far behind the wide receiver market, particularly given Andrews is the No. 1 receiving option in the Ravens’ passing attack. The Ravens drafted Minnesota Gophers wide receiver Rashod Bateman in the first round of this year’s draft, but he will be sidelined for at least the first few games of the 2021 season, making Andrews all the more important. Andrews wasn’t even the first tight end the Ravens drafted in 2018, as they selected now-Atlanta Falcon Hayden Hurst in the first round. Andrews has been a steal since draft day and remains one on this extension.

Over the Cap projects the 2022 franchise tag at tight end to be in the neighborhood of $11.3 million if the 2022 salary cap comes in at the $208.2 million maximum. For reference, the wide receiver franchise tag is projected to be around $19.1 million. The roughly $8 million disparity provides strong leverage for clubs in negotiations, as it would’ve certainly been on the table if Andrews had another season in 2021 like last year, as he ranked 4th in 2020 PFF Grade among tight ends with at least 300 snaps.

Since they were drafted in 2018, all three of Mark Andrews (5th), the Philadelphia Eagles’ Dallas Goedert (8th) and Miami Dolphins’ Mike Gesicki (9th) rank top 10 in PFF’s wins-above-replacement among tight ends. Goedert said recently that he expected to have an extension done at this point, but the Eagles are “going a different way.” After speculation of a potential Zach Ertz ran rampant the entire offseason, it appears he is sticking around in Philadelphia after all, which could delay a Goedert deal until after the season. The Eagles have shown a willingness to carry contract negotiations into the regular season, so perhaps there is still time.

Philadelphia and Miami may ultimately end up using the franchise tag if necessary, but they could regret not getting a deal done before the position market grows. Las Vegas Raiders star tight end Darren Waller has three years remaining on his contract, but nothing is guaranteed after 2021, so he may also be a name to watch before Week 1 kicks off. The league continues to invest more and more in the position, as 2019 first-rounders T.J. Hockenson and Noah Fant are off to strong starts in their careers as well.

Andrews among the top six fantasy tight ends: He's finished in the top five every season since his rookie year and has a good shot of doing so again this year. He will be a particularly strong play early in the season with several other skill players either injured or just returning from injury. Click here to find PFF's 2021 fantasy rankings.

Andrews projected to be a top Ravens target: Andrews leads all Baltimore pass catchers in receptions (156), receiving yards (2,105) and receiving touchdowns since 2018. Even with some of the Ravens' additions this offseason, Andrews is projected for the most receptions (72) and receiving yards (899) on the team this season, per PFF's fantasy projections. Click here to find PFF's fantasy stats.

Andrews an enticing season-long prop bet: Andrews has been the centerpiece of the Ravens' passing offense. PFF projects him to easily eclipse his modest receiving yardage prop, clearing the 775.5 number by over 100 yards. With injuries stacking up at the wide receiver position, Andrews should be at the forefront of Lamar Jackson‘s mind all season.

Andrews an effective weapon out of the slot: 565 of Andrews' 919 receiving routes have come when lined up in the slot over the past three seasons. His 1,346 slot receiving yards over that stretch trail only Kelce (1,667) at the tight end position. Click here for PFF's tight end rankings.