What we can learn from target percentage for fantasy: NFC

Targets are obviously massively important in fantasy football. But you can look at targets in so many different ways, and each way imparts a different bit of information.

Targets per route tells you how trustworthy a player is to his quarterback.

It’s not that simple, of course — an untrustworthy receiver on just an awful corps of receivers is still going to command a high targets per route because teammates do matter in this regard as well — but as a shorthand, you can get a real idea of which players a quarterback deems trustworthy when he’s on a route.

Example from 2017: Exactly four players had 95 or 96 targets in 2017. Jermaine Kearse ran 530 routes. Jamison Crowder ran 453. DeVante Parker ran 95. Alvin Kamara, though? He ran only 291 routes. Kearse’s targets-per-route percentage was 17.9%; Kamara’s was 33.0. Yes, a running back with much of any pass-catching ability is naturally going to have a higher percentage than a wide receiver, because the mere fact that a running back is running a route means he’s more likely to be targeted than a wide receiver who runs a route on basically all of his snaps, but the general numbers illustrate the point here.

So today, I’m going team by team (in the NFC; the AFC will be Tuesday) looking for interesting targets-per-route percentages from 2018 that stand out in one way or another. Because of that, I won’t mention every team here, just the ones where something stands out. We can find particularly efficient or inefficient players around the league that way. 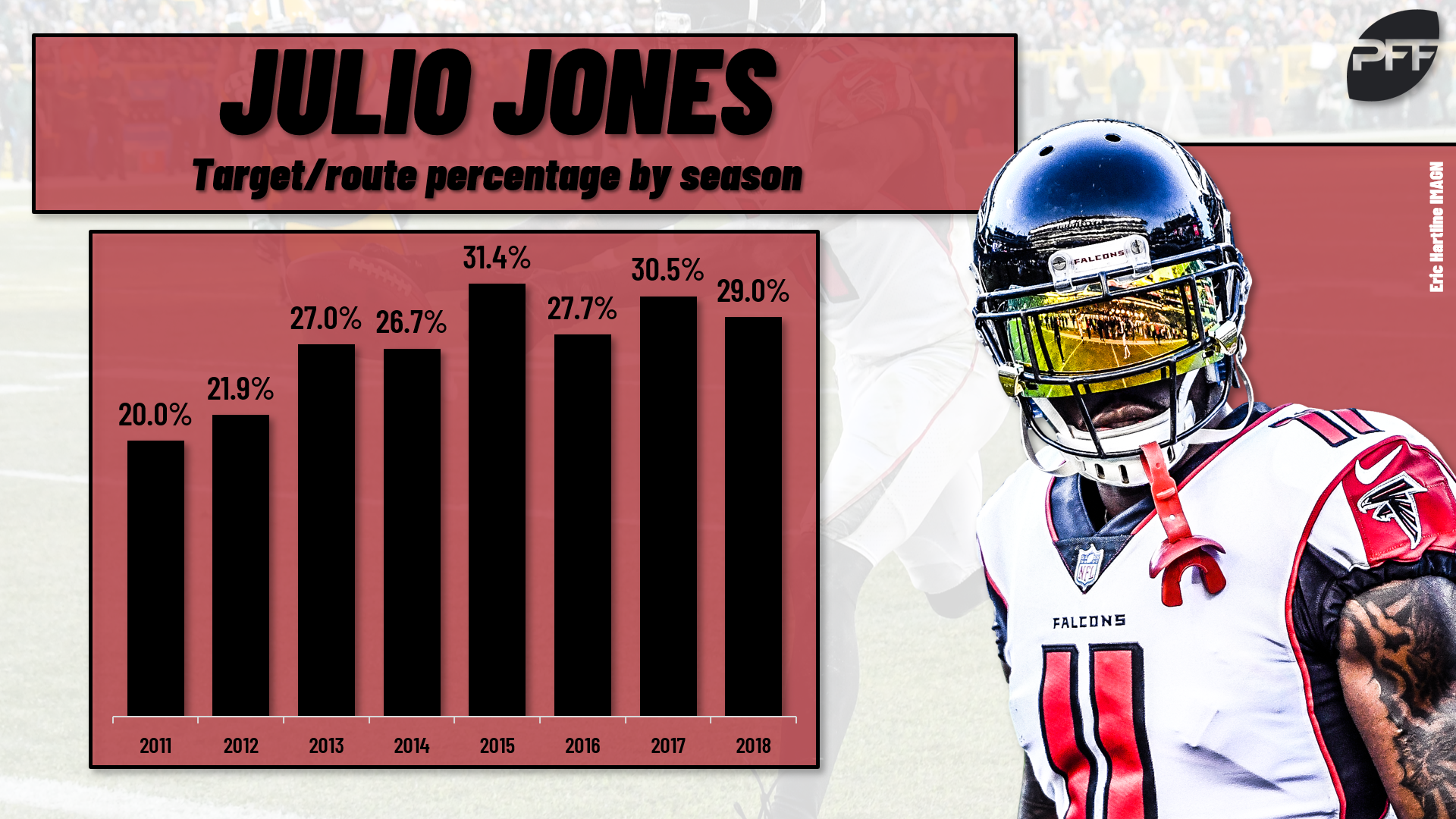 With a minimum of only 35 routes run (which is an insanely small number), Julio Jones led the league’s wide receivers in target percentage at 29.0% and was second to Kamara’s 29.3% among all players. Since 2013 (basically, since Roddy White became irrelevant), Jones has hovered in the high-20s, low-30s every year. Whether he is a touchdown-producer or not, Jones gets targeted to heavily and amasses so many yards that he’s a fantasy monster regardless.

Across the full season, Ian Thomas’ target percentage was 15.3%, but over the last five weeks — after Greg Olsen was done — it was slightly higher, at 16.8%. Still, that’s shy of what Olsen’s was during his heyday, when it regularly topped 20%. Thomas is an interesting sleeper for 2019, especially if Olsen retires or isn’t healthy, but despite a productive final month, he’ll need to increase his attention if he wants to be really fantasy relevant.

Ezekiel Elliott was a hugely productive running back over his first two seasons despite limited attention as a receiver. He exploded as a pass-catcher in 2018, though, catching more balls (77) than he even had career targets (70) before that. His target percentage leapt from the low-teens to the low-20s, and his routes run rose by about 60%, from 265 and 267 up to 410 in 2018.

Among the 30 players with at least 100 targets in 2018, Kenny Golladay’s target percentage of 20.3% was the fifth-lowest (ahead of only Brandin Cooks, Larry Fitzgerald, Adam Humphries, and Sterling Shepard). That’s a bit surprising, considering the dearth of other receiving options on the Lions. Golden Tate was much higher (25.0%) before being traded away, and Theo Riddick’s 27.4% was among the league leaders. That could be a warning sign for Golladay as the Lions switch to a more underneath game, relying on the run and shorter passes, with Danny Amendola on the team and Marvin Jones coming back and apparently healthy.

Davante Adams got a lot of targets, and got them really often! … And then after that, Aaron Rodgers didn’t really have a target he cared about very much. Ty Montgomery is gone, Randall Cobb is gone, Lance Kendricks is a free agent. The top returning target percentage after Adams belongs to Geronimo Allison, who missed the last 11 weeks of the season. There’s room for someone to claim a huge target share in 2018. 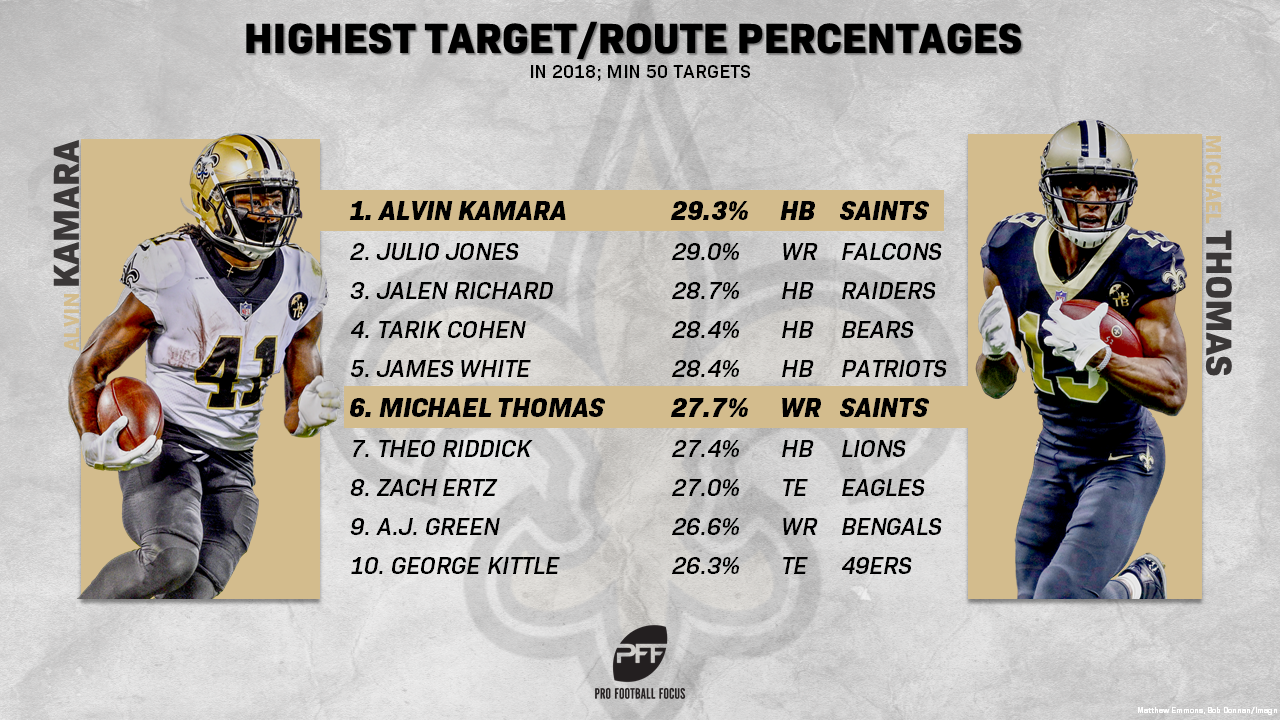 Two teams had multiple players with at least 50 targets and at least a 25% target percentage: The Chargers (Keenan Allen at 26.2% and Melvin Gordon at 25.4%) and the Saints. The Saints had two of the top six target percentages in the league, illustrating the team’s top-heavy roster tendencies. Jared Cook’s presence in 2019 should help the team achieve more balance.

Tyler Lockett’s low number is really surprising — among players with at least as many as his 65 targets, only Marquez Valdes-Scantling’s 14.1% was lower than Lockett’s 14.2. Part of that is Lockett’s health — because he stayed healthy all year and Doug Baldwin came in and out, Lockett had a much higher route total but lost targets when Baldwin was around. Still, this is another reminder of Lockett’s ridiculous efficiency and a warning of possible regression.

The Buccaneers didn’t have a target hog. Instead, they spread the ball around, with DeSean Jackson, Mike Evans, Chris Godwin, O.J. Howard, Jacquizz Rodgers, and Adam Humphries all having at least an 18% target percentage but none topping 21.1. With Jackson, Rodgers, and Humphries all gone, the remaining guys could see a spike in their respective percentages.