Note: Data is from Weeks 1-5, 2022. There are obviously plenty of limitations to this due to the small sample size at hand; key discrepancies will be highlighted in the ensuing paragraphs and the metrics will get stronger as the season continues. 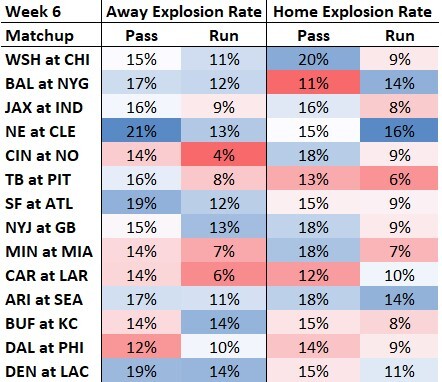 Will Russ ever cook again?: Russell Wilson finished as the fantasy QB4 in Week 4 but otherwise has three finishes outside the top-20 signal-callers in the last four weeks. His 14.6 rushing yards per game are the second-lowest mark of his career, although this shouldn’t be a huge surprise given the history of quarterbacks running less as they get older.

The real problem has been the simple fact that Wilson’s often-heralded accuracy has largely been atrocious to start the season. Overall, Russ has posted middling efficiency when throwing behind the line of scrimmage to nine yards downfield (84.6% adjusted completion rate, 22nd among 40 qualified quarterbacks), 10 to 19 yards downfield (55.6%, No. 27) and 20 or more yards downfield (37.9%, No. 20) alike.

One easy explanation: Injury. Russ received an injection in his throwing shoulder last Friday in order to treat an injury similar to the one that sidelined Dak Prescott in training camp last season. Another could be the reality that the coaching staff and roster have played just five games together.

Another could be that Wilson, 34 in November, has been declining for several seasons, and we all blamed the Seahawks roster instead of the man under center.

My guess is that it’s a mixture of all three and that we should now far more about the overall upside of this passing game after next Monday night’s matchup against the Chargers. It’s tough to expect anybody to trample Derwin James and company; a big bounce-back performance in primetime would go a long way toward calming the concerns of Broncos country and fantasy managers alike.

Good offense beats good defense in today’s NFL: Offenses set up to thrive in their quest to create some explosive pass plays: Patriots, Broncos, 49ers and the Dolphins. Of course, having Skylar Thompson under center instead of Tua Tagovailoa (concussion) or Teddy Bridgewater (concussion) isn’t ideal for the latter squad.

Is it *finally* George Kittle eruption week?: It’s looking good. Kittle continues to run a route on well north of 80% of Jimmy Garoppolo’s dropbacks despite general jokes about his new role as a left tackle. Don’t be surprised if this is finally the week that Kittle blows up: The Falcons have posted bottom-three marks in targets (45), receptions (34) and receiving yards (355) allowed to the position through five weeks.

Don’t sleep on Jerry Jeudy: Jeudy ranks outside fantasy’s top-40 receivers through five weeks of action. To be fair, injuries limited him badly in Weeks 2 and 3 from a snap perspective; the third-year talent has put up PPR WR13, WR21 and WR51 finishes in his only three full games this season.

The latter performance coulda shoulda woulda been far bigger. First, Russ nearly had an early 15-yard pearl of a touchdown to Jeudy. The problem: The receiver only got one hand on the well-thrown ball in the back of the end zone (bad no-call), eliminating the potential 15-yard touchdown. Later, the Broncos then missed out on a potential 27-yard touchdown when Wilson overthrew a wide-open Jeudy, who had sprung free downfield on a slot fade. Finally, Jeudy had an easy 30 to 40 yards at his disposal after getting open on a deep cross; too bad the ball sailed long and gave the defender a chance to force the incompletion, which he did.

Jeudy (11-208-2) has actually been slightly more productive than Sutton (14-198-1) during his aforementioned three non-injury-induced performances despite seeing slightly fewer targets (19 vs. 24). I love buying low on Jeudy at the moment considering his potential to close this perceived gap with Sutton in a hurry inside of a Broncos passing attack that can’t exactly get much worse in the eyes of the public.

Offense is easier when the defense sucks: The only three defenses allowing an explosive pass play on at least 10% of their opponent’s dropbacks: Texans (11.8%), Seahawks (11.5%) and Commanders (10.4%).