The NFL is a matchup-driven league. Offensive coordinators are always looking to scheme their playmakers into one-on-one situations against a defender, while defensive coordinators will attempt to do anything in their power to upset the timing and rhythm of the opposing quarterback.

Note: Data is from Week 1, 2022. There are obviously plenty of limitations to this due to the small sample size at hand; key discrepancies will be highlighted in the ensuing paragraphs and the metrics will get stronger as the season continues. 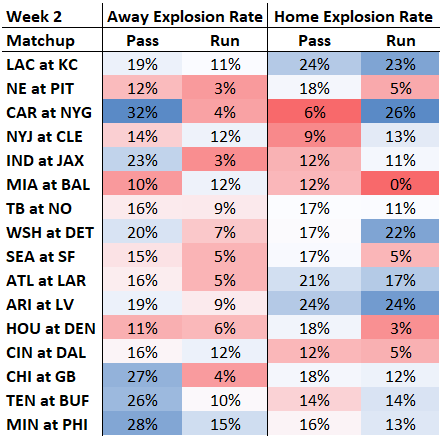 Will the real Carson Wentz please stand up: After one week of action, the Lions rank 31st in EPA allowed per play. Of course, plenty of this can be attributed to Jalen Hurts and the Eagles’ stellar Week 1 performance, but that also wasn’t exactly a surprise. Overall, the Lions entered the season with PFF’s 25th-ranked secondary and 26th-ranked defensive line.

Enter Carson Wentz, who was rather awesome in Week 1 on his way to throwing for four touchdowns for the first time since originally injuring his knee back in 2017. There are talented wide receivers all over the field in Washington at the moment, and his six rush attempts demonstrated there might still be a bit of a rushing floor here.

Wentz is the top waiver wire add of the week at the position. Check out the Tuesday edition of The PFF Fantasy Football Podcast for more thoughts on Wentz and the rest of the week’s top waiver options.

Good offense beats good defense in today’s NFL: These offenses set up to thrive in their quest to create some explosive pass plays — Panthers, Bears, Titans, Chiefs and Raiders.

Can anybody alive cover Davante Adams?: PFF’s WR/CB matchup tool denotes which wide receivers have excellent, good, average, below average or poor matchups. Note that the matchup rating is derived from both the wide receiver’s personal PFF grade in addition to their projected coverage, so sometimes, it’s simply a matter of a receiver being too damn good for just about anybody to handle. Just six receivers are deemed to have an excellent matchup ahead of Week 2:

Maybe there’s a new No. 1 wide receiver in Carolina: Probably not, but at least for a week Robbie Anderson worked as the Panthers’ No. 1 wide receiver ahead of D.J. Moore. While Moore holds the edge in targets (287 versus 254), receptions (162 versus 153) and receiving yards (2,393 versus 1,717) since the two joined forces in 2020, it’s possible that Baker Mayfield involves Anderson at a more even rate moving forward. Anderson, like Donovan Peoples-Jones, is elevated from “nobody cares” to “boom-or-bust WR4/WR5” at the moment.

This week’s matchup in Cleveland shouldn’t be seen as a smash spot, but the secondary didn’t exactly shut down Robbie Anderson (5-102-1). The Browns are happy to move CB Denzel Ward all over the field, but Diontae Johnson (Week 17, 2021) is the only No. 1 receiver he’s actively shadowed under current defensive coordinator Joe Woods. Don’t expect this to change against a Jets offense that has weapons all over the place.

Only the Raiders (76.8%) had a higher non-garbage time pass-play rate than the Jets (76.7%) in Week 1. Meanwhile, the Browns allowed -0.1 rushing yards before contact against the Panthers. Even if the Jets manage to keep things close and want to run the ball more, they might not have much of a choice in the matter against Myles Garrett and company.

Not every passing attack is meant to fly: The clear-cut bottom-five offenses in terms of expected failure in creating big plays through the air: Giants, Browns, Dolphins and Texans.

Amari Cooper deserves better than this: Browns fans can rather easily find out if fellow fans watched their Week 1 victory over the Panthers by asking what they thought about their new No. 1 wide receiver. Yes, Cooper’s 3-17-0 receiving line wasn’t productive. Also yes, a mixture of Brissett and defensive penalties were precisely why the former Raiders' and Cowboys‘ receiver struggled to get much going on the stat sheet.

Brissett also missed Kareem Hunt deep on what had the potential to be a 60-yard house call. Credit to the veteran quarterback for making a few clutch throws to ultimately earn the Browns the victory, but the career journeyman sure didn’t look like the best quarterback on the field against Baker Mayfield last week. I’m afraid these sort of “sheesh” moments will continue to flood the Browns’ passing game in Week 2 and beyond.

Did Kadarius Toney sleep with Mrs. Daboll?: The Giants’ talented second-year receiver is quite easily the biggest faller of the week at the position. He managed to flash both times that he touched the ball in Week 1. The problem is that Toney played just seven snaps in a game that featured Wan’Dale Robinson (knee) get injured. The Giants unironically played Richie James over Toney. Let that sink in.

Fully in the doghouse, Toney is impossible to start in fantasy leagues of all shapes and sizes until we see any sort of sign that more of a full-time role is on the table.