It’s time for the Week 12 fantasy football waiver wire. Fantasy waivers can often make or break your season. Making the right decision on which players to add and drop is crucial, so we have you set up with a deep list of potential waiver wire adds for Week 12.

Nick Foles, JAX (5-10%) — He didn't blow anyone away in his start, but Foles did show a good connection with D.J. Chark. He's in the mix as a QB2 with QB1 upside going forward.

Daniel Jones, NYG (5-10%) — Jones is far from the most stable fantasy option, but he’s displayed a massive ceiling multiple times this season.

Derek Carr, OAK (5-10%) — The Raiders offense is clicking and Carr is playing well. He's 12th among quarterbacks in fantasy scoring since Week 5.

Kareem Hunt, CLV (25-50%) — Cleveland has leaned heavily on Hunt in the passing game, just as we expected. He's a flex-or-better play every week going forward.

Will Fuller V, HOU (20-40%) — Fuller didn't get back on the field last week, but he should return for this week's contest. He's still available in over 20% of leagues and should be scooped up.

DeVante Parker, MIA (15-30%) — It looks like we finally are getting the Parker breakout season. He posted an impressive line in Week 11 despite seeing shadow coverage from Tre’Davious White. 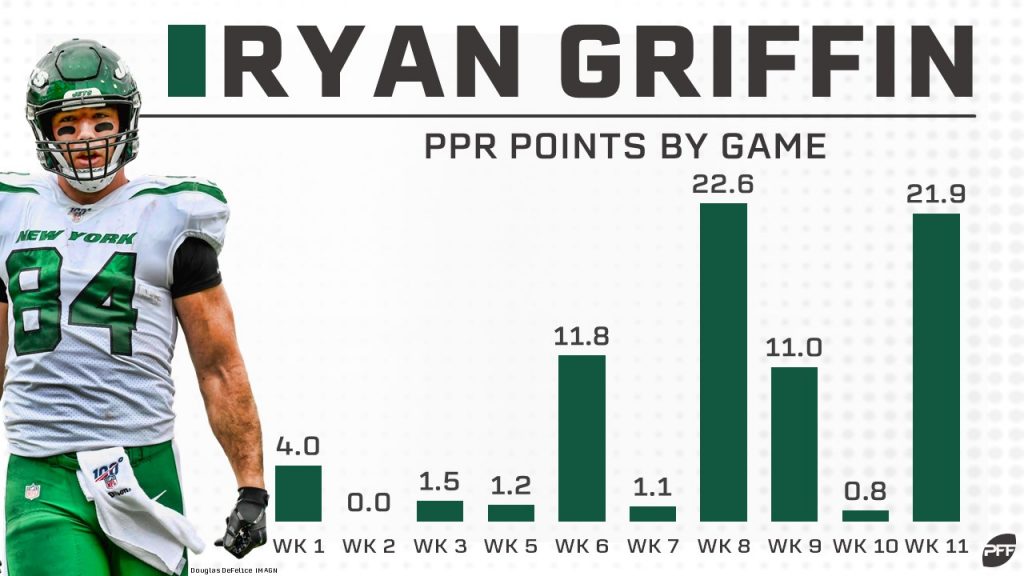 Ryan Griffin, NYJ (10-20%) — With Chris Herndon on IR, Griffin is now locked in as the Jets' top tight end. He's a fringe TE1 option for the rest of the season.

Jacob Hollister, SEA (10-20%) — Hollister has produced TE1 numbers in each of his last two games and is showing no signs of slowing down.

Sam Darnold, NYJ (3-5%) — Darnold is coming off a big Week 11 performance, but it came in an extremely favorable matchup. He's more volatile than the top adds this week.