Eli Manning threw for just 6.1 yards per attempt in 2017, which was his lowest rate since his rookie season back in 2004. At 37 years old and with more miles on his arm than just about anyone, he almost certainly owes some of that decline to his age. But before you write him off for fantasy completely, it is worth considering that Manning’s skill talent was decimated by injury last year. My latest fantasy football ranking and projection research suggests that an improved Giants’ roster could propel Manning’s return to QB2 status, and, more importantly, identifies top-10 fantasy options Deshaun Watson and Kirk Cousins as the two likeliest players to be overvalued by a traditional passing projection.

Manning’s fantasy downfall came about a month into the 2017 season. He went from throwing the ball to Odell Beckham, Brandon Marshall, and Sterling Shepard in Week 5 to Tavarres King, Roger Lewis, and Travis Rudolph in Week 6, and his seasonal yards per attempt soon reflected the team’s losses. 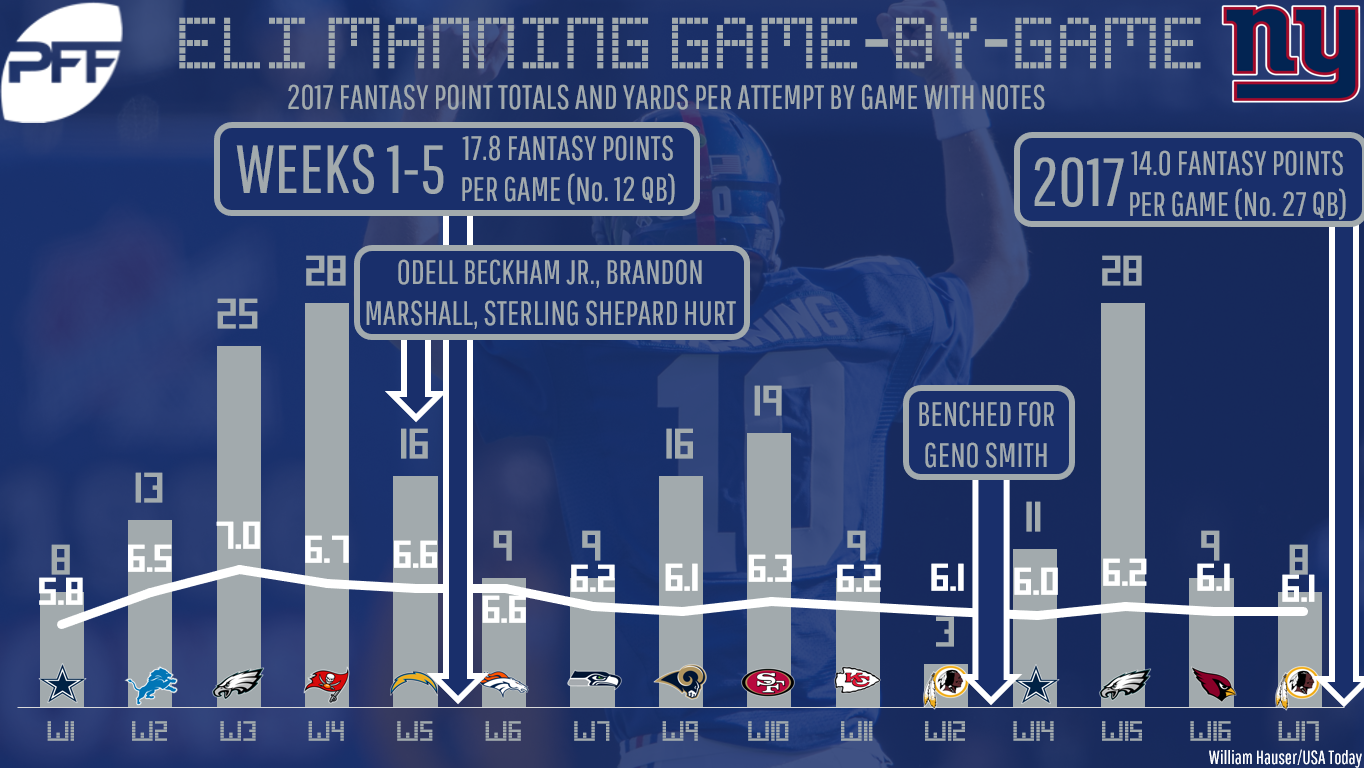 The player ranking system I’ve been developing relies on weekly projections that use recent historical performance rates to predict what a player’s efficiency will be for a future week. That seems like it should be particularly easy for Manning, whose only missed game in the last 13 years was a coach’s decision in 2017. My system estimates that Manning’s true talent — unadjusted for the venue, the weather forecast, and the defense he will face — entering Week 1 of this season would produce 230.3 yards, 1.30 touchdowns, and 0.87 interceptions on a 62.3 percent completion rate for the 36.1 pass attempts it projects for him. Over a full season, those totals would prorate to 3,685 yards, 20.8 touchdowns, and 13.9 interceptions, which is very similar to his actual line from 2017 of 3,468, 19, and 13.

That projection seems like a success then, but it actually isn’t because it is based heavily on the three months last year when Manning’s best receiving option was rookie tight end Evan Engram. Manning is not in that bad situation anymore. With Beckham back from injury, Engram no longer a rookie, and top pick Saquon Barkley looking as impressive as a receiver as he does a runner, Manning’s skill talent is suddenly the toast of the league. It just doesn’t make sense to in essence penalize Manning’s current projections for a roster that he no longer has to play with.

I spent a lot of time thinking about how I could handle that issue, and I finally had a breakthrough when I interjected catchable targets (CTgts) as a way to separate a passer’s responsibility from his receivers’ responsibilities. In short, my passing fantasy ranking and projection system now multiplies a team’s projected pass attempts by its quarterback’s tendency to target skill players based on their roles on the team’s depth charts. It then multiplies the resulting target totals by the quarterback’s projected accuracy percentages on those passes, which crucially are based on his historical tendencies throwing to player roles rather than the players themselves. From that point on, the quarterback is out of things. The system instead relies on the targeted players’ receptions, yards, and touchdowns per catchable target to finish off the passing projection calculations.

I’m not sure I pulled off a succinct, understandable explanation of how the system works, so I’ve also included a diagram that illustrates how Manning’s projected total of passing yards is calculated for Week 1 this season, again without any adjustments made for the venue, weather forecast, or the defensive tendencies of his opponent. I encourage you to use the diagram to make sense of the process rather than to critique the specifics of the projections. The latter come from a team depth chart I haven’t updated in close to two months and do not include any manual adjustments to the skill player target allocations organically produced by the system. 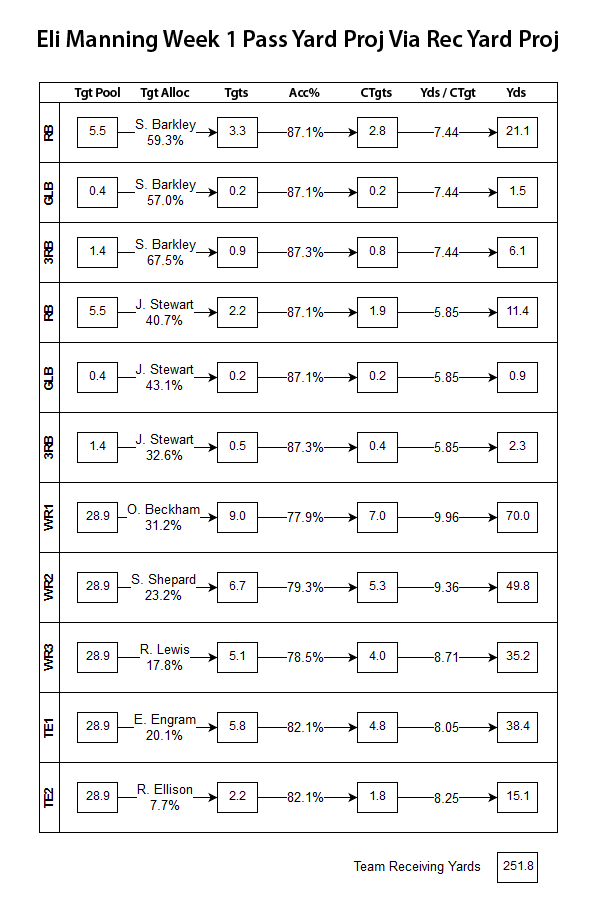 The reason there are three separate projections for the running backs Barkley and Jonathan Stewart is because I opted to split the roles of early-down back, goal-line back, and third-down back into distinct “positions.” I believe that choice is an elegant way to counterbalance the biggest shortcoming of target and carry projections that are based on positions rather than players, which I will explain in more detail in a future article. However, that split neatly demonstrates why a pass accuracy-based solution works so well. Manning’s accuracy projections on throws to early-down backs, goal-line backs, and third-down backs were computed independently, and they still fall into a beautifully narrow band of 87.1 percent to 87.3 percent. Put broadly, the talent of the targeted skill player does not noticeably influence his quarterback’s accuracy on the pass. And more importantly, it is the receiver and not the quarterback who is overwhelmingly responsible for the production on a pass attempt once an accurate throw has been made.

The yardage projections for the 11 Giants receivers I’ve allocated targets to in Week 1 sum up to 251.8 yards, which is a bit more than 20 extra yards over a projection that relies exclusively on Manning’s recent historical tendencies. Manning’s projected completion rate (62.9 percent) and touchdown total (1.55) increased, too. That’s what I wanted to see since Beckham, Shepard, and Barkley should be much better receiving options than King, Rudolph, and Wayne Gallman.

When I performed the same exercise for every quarterback expected to start in Week 1 this year, Manning ended up with the third-biggest increase in his fantasy projection. Sophomores Patrick Mahomes and Mitchell Trubisky were the two passers who beat him, and I think that makes sense given the changes on their teams. The Chiefs added an excellent pass-catcher in Sammy Watkins this offseason — and remember that Mahomes made his lone start in 2017 in Week 17 when both Tyreek Hill and Travis Kelce rested to prepare for the playoffs. Meanwhile, the Bears’ skill-talent overall rivals even the Giants’. They added Allen Robinson, Trey Burton, and rookie Anthony Miller to their receiving corps and will hopefully finally enjoy an extended run from former top-10 pick Kevin White. 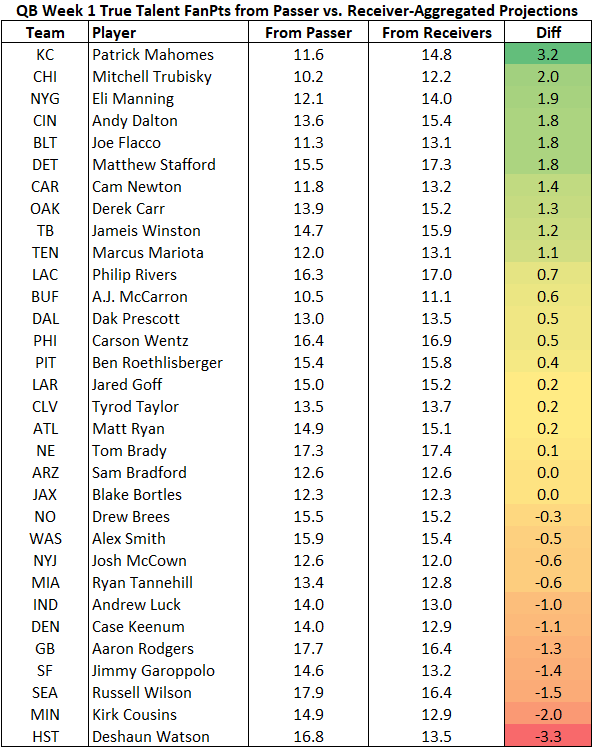 On the other side of things, this analysis to my mind produces two notable causes for concern. Deshaun Watson annihilated the field in fantasy points per dropback over his seven games in 2017, but that fantasy success strikes me as unsustainable given that his 65.6 percent accuracy percentage was third-worst of 40 qualified passers. Cam Newton is the archetype of an inaccurate-but-athletic passer who can consistently produce top fantasy seasons, but Watson is much smaller at just 220 pounds. I don’t think he can run in six touchdowns every season like Newton does, which is why I believe it’s a mistake to select Watson ahead of Drew Brees in typical formats.

Kirk Cousins is the other quarterback who shows a marked decrease in his fantasy projections with the receiver-aggregation approach. That actually corroborates my Yards Added research that indicated that the 2017 Redskins’ pass catchers were much more effective than the 2017 Vikings’ pass catchers — you can hear me discuss those findings at the 29:05 mark of the February 7 Dynasty Slant podcast. Yes, Adam Thielen and Stefon Diggs are better fantasy options than any receiver the Redskins had, but Chris Thompson, Ryan Grant, Jamison Crowder, and Vernon Davis were all incredibly efficient on their more-moderate target totals. I expect Cousins to lose fantasy value this season even if he plays to the same standard he did in recent seasons in Washington.

A smarter ranking and projection system is not going to magically jump Manning ahead of Watson — the likely difference in their rushing production is massive — but it could leap Manning over Cousins despite his less favorable home stadium. More likely, it will make Manning a similar value to Jimmy Garoppolo, Derek Carr, and Jared Goff, but at much-less-than-a-QB2 price. The dissonance between the projections from a quarterback-efficiency approach and a receiver-aggregation approach suggests that traditional projections could miss the mark for passers by as much as 50 fantasy points over a full season. It’s just something to consider before you prematurely pronounce the death of Manning’s fantasy career for the umpteenth time.