There are seven preseason games on tap for Saturday, which means we get our third straight day of preseason DFS for the week. The games are a little broken up on the major DFS sites, with the “main slate” featuring the five late games. 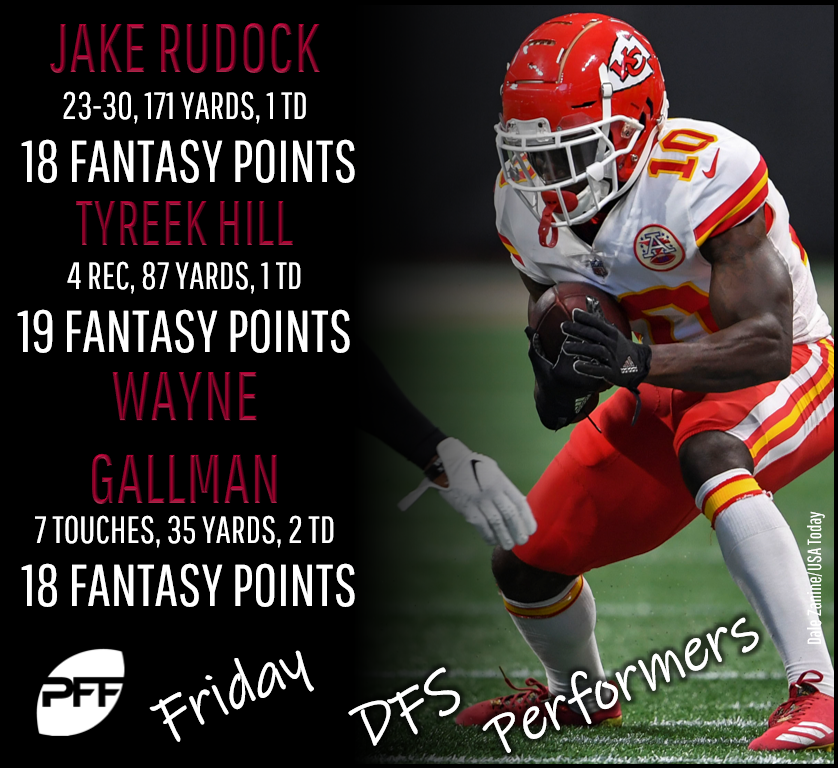 This piece will go over some of the players I’m thinking about for all games on Saturday, with a focus on the main slate.

Chad Kelly looked great for the Broncos in their first preseason game, completing 14 of 21 attempts for 177 yards, two touchdowns, and one interception. He has passed Paxton Lynch on the depth chart and will get a chance to solidify himself as the team’s backup on Saturday.

Kyle Shanahan says Jimmy Garoppolo’s playing time will be similar to what it was in Week 1 (nine snaps), which means we should get a healthy dose of C.J. Beathard and Nick Mullens again on Saturday. Beathard is locked in as the team’s No. 2, so the 49ers may want to give Mullens some extended run to see whether they want to keep three quarterbacks. He completed 11 of 13 passes for 141 yards and a score (and an interception) last week.

I’d expect us to see a lot of Ryan Griffin again in Week 2. He had 43 snaps in the team’s first game, going 20-of-26 for 179 yards and a score. He’s an option again on Saturday against the Titans.

In the earlier games, Oakland’s Connor Cook is battling EJ Manuel for the team’s backup post. Cook attempted 19 passes against Manuel’s six last week. He threw for 141 yards and one score. Cook will be on my radar again this week.

Ryan Nall played 37 snaps in the first preseason game, gaining 95 yards on nine attempts. The 37 snaps were the second-most among all running backs in last week’s games. His teammate, Taquan Mizzell, saw 32 snaps (tied for fifth-most). They could be in for decent workloads again on Saturday, especially because Jordan Howard is banged up.

Raheem Mostert is going to start for the 49ers on Saturday because of injuries to Jerick McKinnon and Matt Breida. He gained 57 yards on eight attempts last week. Joe Williams will also mix in, and he led the 49ers backfield in snaps (32) and attempts (11) last week. I like them both again this weekend — especially if Alfred Morris doesn’t play.

Bo Scarbrough paced all Dallas running backs last week with 26 snaps, nine attempts, 33 yards, and a score. He’s on my list again for Week 2, although Rod Smith (eight attempts, 32 yards) will be lower-owned and may see just as much work.

With Rashaad Penny sidelined and Chris Carson in the driver’s seat for touches to begin the year, we should see a bunch of Mike Davis again on Saturday. Davis had 17 snaps last week, which was just one behind Penny’s 18 for the most on the team. For comparison, Carson had only nine snaps.

In the early games, I’m not opposed to rolling with Stefon Diggs, who caught three of three targets for 35 yards and a touchdown on just seven snaps. Laquon Treadwell is vaguely interesting as well because he saw 41 snaps last week, most on the team. However, he had just one target, so Treadwell isn’t a must-start by any means.

Chargers wideout Geremy Davis is going to be popular after he posted a line of 4-88-1 last week. He also played 55 snaps, most among all wideouts last week. He’s vying for a roster spot, and sometimes the smartest thing to do in preseason is to play the hot hand.

Dante Pettis is worth a look on Saturday. He had just one reception last week, but he did play the third-most snaps among San Francisco receivers last week and garnered three targets. His lone reception went for 53 yards, though, so his big-play ability was on display.

Cincinnati’s John Ross led the team with five targets last week, but he caught just one of them for 20 yards. The Bengals receiving corps is fairly open once you get past A.J. Green, and I’ll be chasing Ross’ high usage from last week.

Tanner Gentry needs to be on your list. He played 42 snaps in the Hall of Fame game and another 41 snaps last week. Through two preseason games, he has 17 targets, which is remarkable volume in the preseason.

Adam Shaheen was our No. 2-graded tight end last week, earning a 92.6 grade after catching all three passes thrown his way for 53 yards. His teammate, Daniel Brown, caught five of five targets for 90 yards.

Adam Shaheen looked good for the Bears in their second exhibition game of the summer. pic.twitter.com/EpSyjpTrbK

San Francisco’s Ross Dwelley had three receptions for 44 yards last week after seeing 45 snaps, second-most among all tight ends. With George Kittle set to miss the remainder of the preseason, we shouldn’t expect the new No. 1 (Garrett Celek) to see much run.

Jordan Akins will be popular after he scored two touchdowns in Houston’s first preseason game, but he did only play 10 snaps, and his touchdowns came on his only two targets. He’s not a slam-dunk option on Saturday, but that big-play ability has to get your attention.