The luckiest and unluckiest team scorers of 2017

By that measure, each yard gained is worth about 0.07 points, and each point is worth about 15.3 yards. But, just like you automatically start with a score of 400 on the SAT before you even fill in a bubble, NFL scoring doesn’t really work that way. There’s a bottom threshold of scoring, below which it’s just not realistic for an NFL team. In our five-year sample, the 2016 Rams really showed the bottom of our threshold, with the fewest yards (4,203) and points (224) of any team in the 160-season group. (The top end, the 2013 Broncos, at 7,317 yards and 606 points, really ought to be impossible as well — no team is within 500 yards or 66 points — but extremes happen.)

Plotting every team’s points and yards, then, allows for a formation of a formula that yields an approximation of the number of points a team should have scored based on their yardage. (Allowing for the obvious caveat that some points are scored — on defense, on special teams — without any yardage, this idea still works on a broader scale.) 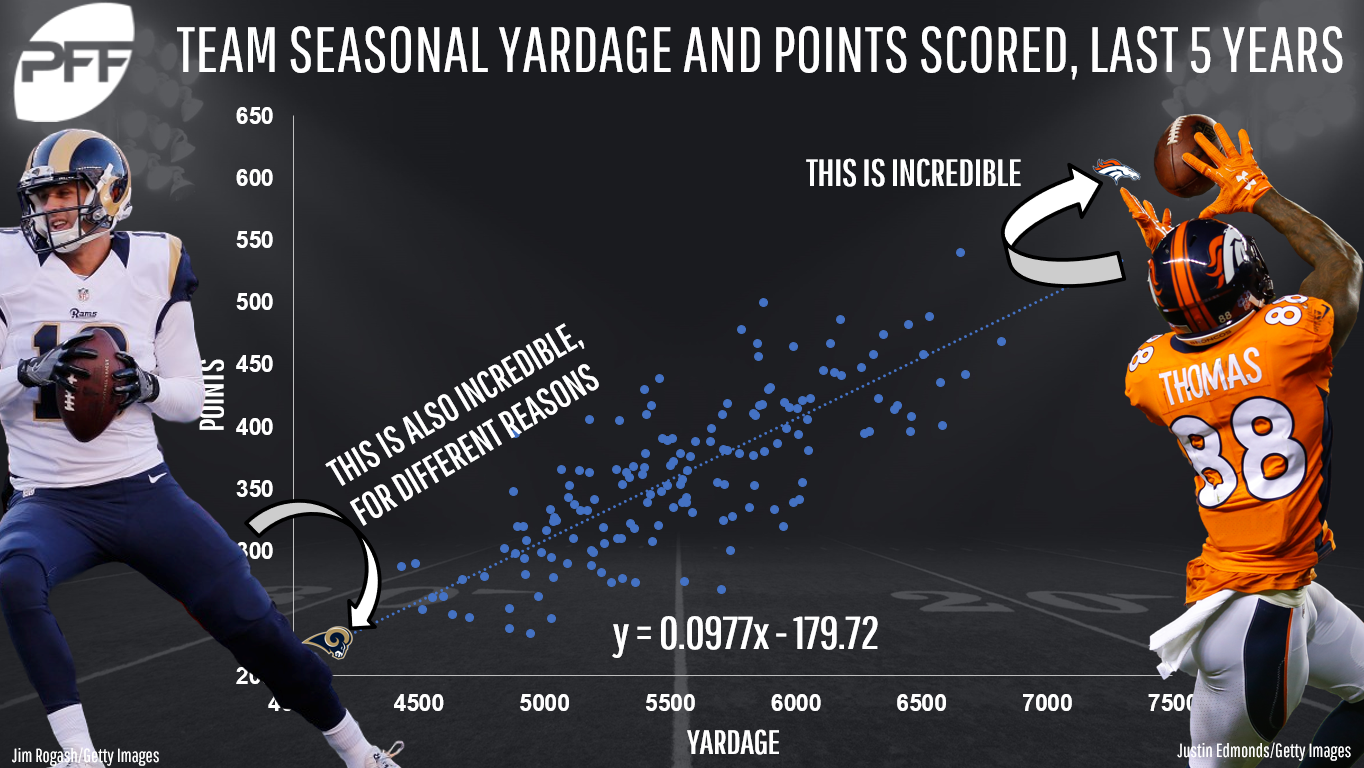 Below, I’ll look at the team numbers from 2017 that are most interesting relative to expected point totals, and what that could mean for fantasy in 2018.

General thoughts: The Super Bowl-bound 2015 Panthers were the only team in the last five years that beat expectations by more than 100 points, scoring 500 when their yardage total would have pegged them at 394. A year later, the team beat expectations by 11 points; the year before, it fell short by 23. There’s a lot of luck involved here. Common bond here, and it’s not very surprising: by and large, teams that exceed expectations have strong defenses, because strong defenses lead to good field position, which means fewer yards needed to score points. What it doesn’t mean, however, is that that sustains year-over-year — just as defenses are fungible, so is luck.

Only five teams had fewer yards from scrimmage than the Ravens last year; only eight teams scored more points. That is partly to do with the Ravens having an above-average defense, of course, but luck played plenty of role as well. While no individual Raven had a ridiculous number of touchdowns, RBs Alex Collins and Javorius Allen combined for 10 rushing scores on 365 carries; you can expect slightly less efficiency out of the running game in 2018, particularly if the passing game doesn’t improve. One thing to keep in mind, however — the inevitable-but-maybe-not-in-2018 ascension of Lamar Jackson to the starting role, which will change this offense completely. (Easy candidate for regression, although not one that helps much for fantasy: FB Patrick Ricard is unlikely to score two touchdowns on four targets in a season again.)

Sean McVay certainly looks like a genius after one year as a head coach, and it seems fair to call him likely a very good coach. That’s especially true when comparing him to Jeff Fisher, who by all accounts was a subpar man in charge. But even with all that, it’s hard to believe the Rams improved by 1,581 yards, 254 points, and 100 points compared to expectation without a reasonable measure of luck being involved. I discussed the departed Sammy Watkins’ touchdown luck in a piece earlier this offseason — even if he had remained with the Rams, his scoring success would likely have dropped off, and whoever gets his lost targets (probably Brandin Cooks) isn’t likely to score at the same rate. Meanwhile, Todd Gurley saw one more carry in 2017 than he did in 2016 (279 to 278) but more than doubled his rushing touchdowns (from 6 to 13). You can credit some of that to McVay, and some of that to improved offensive line work, and some of that to Gurley himself, but the reality is likely somewhere in between the two extremes.

Two similar stories here — good defenses, good offenses that overproduced. I expect regression from both of them in 2018, and less fantasy production from their big names along with that. Golden Tate, Alshon Jeffery, Zach Ertz, and the other top-end options on these two rosters might not see significant dropoff, but secondary options like Nelson Agholor, Theo Riddick, and Jay Ajayi might struggle.

Teams that fell short of expectations

General thoughts: Just as only those 2015 Panthers beat expectations by 100-plus points, only one team fell 100-plus short — the 2016 Bears, whose mark of -109 points compared to expectation was the worst in the sample by a full 22 points. The Bears had the 12th-fewest points over the last five years, but were actually slightly above-average in yards from scrimmage. While the top five teams against expectation were a good-but-not-ridiculous 54-26 in their seasons, the bottom five teams against expectation were a combined 13-67. This way, madness lay.

By and large, teams that finish down on this end of things are due for an overhaul. This offseason, the Browns brought in two new quarterbacks (Tyrod Taylor and Baker Mayfield), two new running backs (Nick Chubb and Carlos Hyde), and a new wide receiver (Jarvis Landry). The Giants brought in two new running backs (Saquon Barkley and Jonathan Stewart) and a new coaching staff. The Buccaneers jettisoned their disappointing running backs and brought in Ronald Jones II. That’s a big part of the reason why only one team has been -50 or worse in consecutive years — Washington in 2013 and 2014. It’s not necessarily teams that are bad that need overhauls; it’s teams that are worse than their base performance says they should be. Expect all three of these teams to do better (and offer better fantasy performances) in 2018, because their personnel is so different. Not with wildly different personnel, however, is our final team …

I’ll be beating the drum for the Chargers all offseason — I think there’s a decent chance this is the best team in the AFC. The Chargers were maybe the league’s unluckiest team in 2017, as evidenced above. They’ve already attempted to address their kicking issues by bringing in Caleb Sturgis and Roberto Aguayo to compete for the job this offseason, added Mike Pouncey to hopefully help at center, and should get Forrest Lamp back healthy for 2018. A little more luck on the scoring side (which should lead to better fantasy productivity for — primarily — Keenan Allen and Hunter Henry), and this team is in line for a huge season.