Are you a tight end? Are you a 2011 Packers wide receiver? If you answered “yes” to either of those questions, then congratulations! There’s a chance you can maintain ridiculous touchdown luck multiple seasons in a row. If you answered “no” — and I’m sorry, Sammy Watkins, but we’ll get to that — you likely cannot.

Let’s back up a little. There are certain thresholds that signify receiving touchdown luck. Personally, my favorite is 10 percent. If you are scoring a touchdown on 10 percent of your targets, well, congrats on a nice season, but maybe don’t get too comfortable at that rate.

But there are exceptions to every rule. What players have broken the string, and reached a 10-percent touchdown rate in consecutive seasons? Well, let’s look:

For those following along at home, let’s break that group down:

In short: If you are a wide receiver who puts up ridiculous touchdown luck one year, the only way you’re likely to do it again is if you have Aaron Rodgers as your quarterback.

Sammy Watkins (probably) does not have Aaron Rodgers as his quarterback. 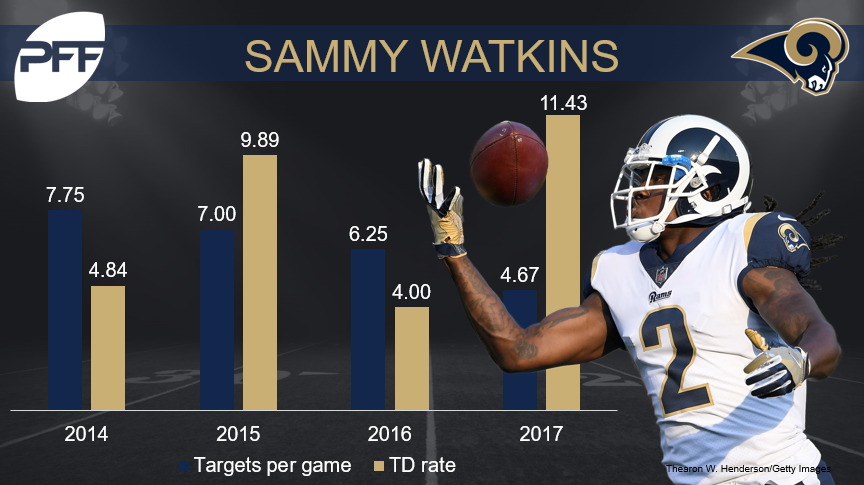 What does it mean for 2018? Four players qualified for our sample in 2017. Three (Tyler Kroft, Jimmy Graham, Kyle Rudolph) were tight ends, and while their production is unlikely to repeat in 2018, there’s at least precedent for them to do so. The fourth, as was so subtly hinted at above, was Sammy Watkins.

Watkins did not have a vintage Watkins year as a Ram. He put up his lowest PFF grade (76.2) since his rookie year, averaging only 4.7 targets per game (he averaged 7.2 in three years as a Bill) and tying with Ted Ginn as the No. 33 fantasy wide receiver. But where he lacked in yardage, he more than made up in scoring, as Watkins scored eight times on only 66 targets, good for an NFL-best 12.12-percent rate in 2017.

As we’ve seen above, wide receivers just don’t do that two years in a row. Watkins is a free agent this offseason, so it’s theoretically possible he lands with Aaron Rodgers, but it remains unlikely. Considering his injury history, it’s unlikely any team signs Watkins as its clear-cut No. 1 receiver, as he was in Buffalo.

Factoring in Watkins’ likely touchdown regression and the fact that he’s going to be one of multiple mouths to feed wherever he lands, and the Watkins who has been a top-30 WR draft commodity the last three years isn’t likely to appear in 2018. Instead, we will have a health-dependent flex option at best who is likely to see his scoring fall off this year. Tread carefully.