The best and worst schedules for the fantasy running backs

One of my favorite days of the offseason is when the NFL schedule comes out. First, I look to see how Roger Goodell screwed over my favorite team with scheduling for the millionth season in a row. Yup, per Mike Clay’s analysis, my beloved Giants have the toughest schedule yet again. Then, I spend a few minutes cursing and sulking. Finally, I’ll turn my focus back to fantasy, building out the schedule in spreadsheet form and ultimately changing each opponent to that team’s average fantasy points allowed per game (in the prior season) by position.

With every article ever written on strength of schedule, one must always start with the following caveat: There’s a lot of variance in this data. So much changes year-to-year and team-to-team. A defense’s weakness last season may now be its strength after significant free agency and draft acquisitions. Or, perhaps that defense’s vulnerability was the result of a defensive scheme that no longer exists after the team made a coaching change. Still, with these caveats in mind, strength of schedule is something I spend a good deal of time on each season. It paints a decent picture of the season as a whole, a player’s fantasy postseason schedule (P-AVG), and weeks to stream or target players in trade.

Here is every team by running back strength of schedule: 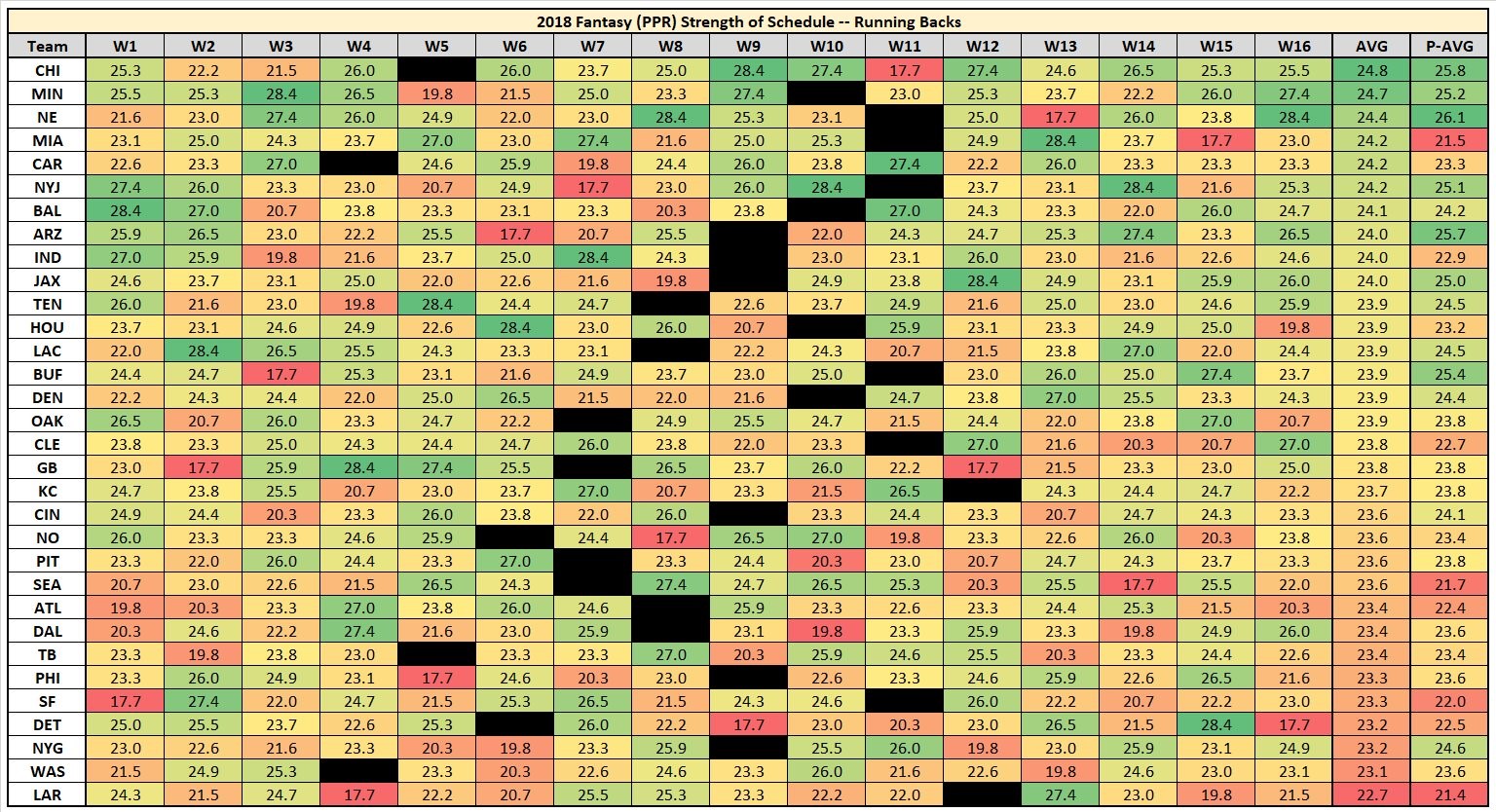 Here’s how these schedules look in contrast to their 2017 schedules (again, by fantasy points allowed per game):

Five best running back schedules in 2018

1. Chicago Bears – Not only do Chicago’s running backs have the easiest strength of schedule (and the second-easiest postseason strength of schedule), but they have the most-improved strength of schedule, after having the 11th-toughest schedule last year. In total, this is worth an improvement of 1.24 fantasy points per game. On average, last season, 54 percent of a team's fantasy production allowed to running backs came on the ground, which is also the same percentage projected for Chicago in 2018. This means both Tarik Cohen and Jordan Howard should get a near-equal schedule-boost in fantasy scoring. Vegas is projecting 1.5 more wins for Chicago this season, and the projected improvement in gamescript should help Howard more than Cohen. That said, I think it’s unlikely Matt Nagy runs at the same rate John Fox did last year (the eighth-highest rate, despite leading at the 10th-lowest rate). In either case, Cohen is likely in line for more receiving volume this season, considering Howard’s historically atrocious career drop rate. While strength of schedule won’t have a major impact on my rankings, I think it’s worth moving up both running backs in this instance.

2. Minnesota Vikings – The Vikings’ running backs have our second-easiest strength of schedule in 2018 (and our fifth-easiest postseason schedule), after having the easiest schedule in 2017. This bodes well for sophomore running back Dalvin Cook. Cook was one of my favorite talents coming out of the draft last season, and I drew some ire for ranking him above Leonard Fournette. He was terrific at the NFL level, albeit on an extremely small 3.5-game sample. Of 59 qualifying running backs, Cook was our fourth-highest-graded runner, ranking seventh in yards per carry (4.78) and 10th in PFF elusive rating (56.1). Cook averaged 16.9 fantasy points per game and 16.5 expected fantasy points per game last season. These numbers rank 10th- and seventh-best at the position, respectively, despite being disadvantaged for leaving his final game early due to injury. In addition to the soft schedule, Cook should get an additional boost from the departure of Jerick McKinnon, who averaged 2.5 carries and 2.75 targets per game when Cook was healthy. However, Cook did receive a bump down in my rankings after losing offensive playcaller Pat Shurmur to the Giants, who (heading into last season) led all active play-callers in weighted opportunity for running backs. Although I’m much more optimistic than not, his first-round ADP (1.12) is still a bit too high for my liking.

3. New England Patriots (easiest postseason) – The Patriots have our third-easiest running back schedule for the second year in a row. They also have our easiest fantasy postseason schedule. This is great, but the issue is trying to determine which New England running backs might benefit the most. Will early-down and goal-line work be divided among some combination of Rex Burkhead, Mike Gillislee, and Jeremy Hill? Will receiving work be divided between Burkhead and James White? I’m most excited about Burkhead’s prospects, being the most multi-dimensional of the team’s backs, but my overall level of confidence is low. Still, his current ADP (RB30) is attractive enough to make him a value.

4. Miami Dolphins – Kenyan Drake is a player I’ve gone back and forth on quite a bit this offseason. He has the benefit of our fourth-easiest strength of schedule this year, and, so long as Miami doesn’t add a better running back to their roster, I don’t see a 35-year-old Frank Gore pushing for meaningful touches.

As I detailed here, Drake’s efficiency has been other-worldly throughout his short career and Adam Gase’s running backs have always been top producers for fantasy. Drake’s small sample size is a concern, as is the fact that he has never been featured as a true bell cow – dating back to college (73 total games), only seven times has he touched the ball more than 13 times in one game. Though he was used as an every-down bell cow toward the tail end of last season and to great success (ranking eighth at the position in total fantasy points across the last six weeks of the season). On the other hand, Drake also had an unsustainably high percentage of carries go for 20 or more yards last season, and had the easiest player-specific schedule on the ground, as I detailed here. Despite these few concerns, there’s much more to be excited about, and I think Drake is an excellent value based on current ADP (4.12, RB22).

5. Carolina Panthers – The Panthers have our fifth-easiest schedule this year, above average in both rushing and receiving fantasy production (but more so in receiving production), which should bode well for Christian McCaffrey. After the departure of Jonathan Stewart, who handled 58 percent of the team’s running back carries last year, one of two things can happen. 1) Carolina drafts a replacement to handle early-down duties (someone like Nick Chubb, Derrius Guice, or Ronald Jones II) and McCaffrey doesn’t earn a significant fantasy upgrade. 2) Carolina doesn’t spend significant draft capital on a running back (unlikely) and McCaffrey is locked into a bell-cow workload, and should slide into the first round of all PPR drafts.

McCaffrey was woefully inefficient on the ground in his rookie season, but did look better in contrast to his blocking advantage, and especially so in relation to Stewart. McCaffrey is better through the air but was productive enough on the ground in college that I’m optimistic he improves in this category. The bulk of McCaffrey’s production came through the air last year, recording the 10th-most targets by a 100-carry running back since targets became a statistic (1992). He finished 12th at the position in fantasy points per game, despite ranking 39th in total carries. Even if Carolina spends significant draft capital on receivers, McCaffrey should again be locked into a significant receiving workload. McCaffrey is the No. 13 running back in my current PPR rankings and could rise much higher depending on what Carolina does in the draft.

Five worst running back schedules in 2018

1. Los Angeles Rams – After having our second-toughest schedule last season, the Rams have both our toughest full fantasy season and fantasy postseason schedules. Although it’s  a disadvantage for Todd Gurley, I’m not sure it really matters. He averaged 22.4 fantasy points per game against defenses ranking top-10 in fewest fantasy points allowed per game to running backs. In his eight other games he averaged 21.0 fantasy points per game. We also discussed how good Gurley was on the ground relative to his tough schedule here. While Gurley is certainly worth the first overall pick in your fantasy drafts, I’ve been leaning more toward Le’Veon Bell due to a larger sample of dominance, and this might be another reason to rank Bell higher.

2. Washington Redskins – Washington’s strength of schedule is well below average by rushing fantasy points per game allowed (-1.4), but is actually above average in receiving fantasy points per game allowed to running backs (+0.5). This is good news for Chris Thompson, who I like a lot at current ADP (RB35) and wrote about here. While this might be good news for Thompson, it isn’t for whoever serves as Washington’s early-down back in 2018 (Samaje Perine, Rob Kelley, or a rookie), though I was never optimistic on any of them to begin with. Even including the weeks Thompson was injured, Perine and Kelley combined for just four RB1 weeks over the past two seasons.

3. New York Giants – The Giants have our third-toughest strength of schedule, which bodes poorly for whoever their starting running back might be. If it’s rookie phenom Saquon Barkley, I’m not sure it matters too much due to his capabilities as a pass-catcher (leading all combine-invite running backs in career NCAA receiving yards and missed tackles forced per touch). If it’s Jonathan Stewart, Wayne Gallman, Paul Perkins, or a different rookie, I’d be concerned. Although Shurmur has a long history of uplifting running back play (as alluded to above), the schedule, coupled with projected gamescript, has me skeptical any running back outside of Barkley proves fantasy-viable.

4. Detroit Lions – Detroit’s 2018 running back schedule ranks fourth-worst and below average in both rushing and receiving fantasy points per game. After finishing eighth in fantasy points per game at the position in 2016, Theo Riddick finished 33rd last year. Ameer Abdullah finally stayed healthy, but also disappointed, ranking 40th and finishing as our worst-graded running back. The team also brought in LeGarrette Blount, who has had some fantasy success in recent years but doesn’t have the peripherals that would suggest he can continue to do so. With the group being stuck in a frustrating committee, I’m not too excited about either running back. If they all stay healthy, none of the three offers much value outside of being high-floor, low-upside bye-week fill-ins.

5. San Francisco 49ers – San Francisco has our fifth-toughest total and fourth-toughest postseason schedule for running backs in 2018. The running game as a whole should improve, as San Francisco moves on from Carlos Hyde (who graded out 50th of 58 qualifying running backs last season) in favor of Jerick McKinnon, who ranked eighth-best. The running game should also improve amid better gamescript, as Vegas implies San Francisco win 2.5 more games next year. Still, this and the schedule might work against McKinnon, considering he’s been a better receiving threat than runner throughout his career. San Francisco has an above-average schedule for running backs on the ground (+0.38), but rank below average through the air (-0.68). San Francisco is still an ideal landing spot for McKinnon and I think a breakout is coming (as I outlined here), but there are significant efficiency concerns for him (as I also outlined here). All of this being said, and despite the tough schedule, I think he’s an extremely strong value at ADP RB21.