The end is near for both the NFL preseason and fantasy football draft season. But we still have one more big weekend of drafts ahead. With three weeks of the preseason under our belt, we have a pretty good sense the deeper names to know. These players give you breakout appeal at a discounted price on draft day. Below you’ll see 10 players who are likely to still be available from the 10th round on in your drafts. Keep in mind that the names at the bottom of the list are only viable draft options in deeper leagues.

He isn’t going anywhere near as late as he was a month ago, but Pollard can still be gotten for a late-round price tag on draft day. The Cowboys have made it clear in the preseason that they view the rookie out of Memphis as a potential three-down replacement for Ezekiel Elliott. Pollard has been on the field for all of Dak Prescott’s 22 snaps over the last two preseason games. Even if Elliott returns to the team, Pollard has some premium handcuff value in the Cowboys backfield.

Sure, the Bills used LeSean McCoy and Frank Gore ahead of Singletary in their third preseason contest, but Singletary made the most of his lone first-team carry, scoring on a nine-yard run. While his position on the depth chart doesn’t look particularly favorable, Singletary could see a value boost if the Bills decide to make a roster move at the position when cutdowns are due later this week. Otherwise, he’ll be an intriguing handcuff. 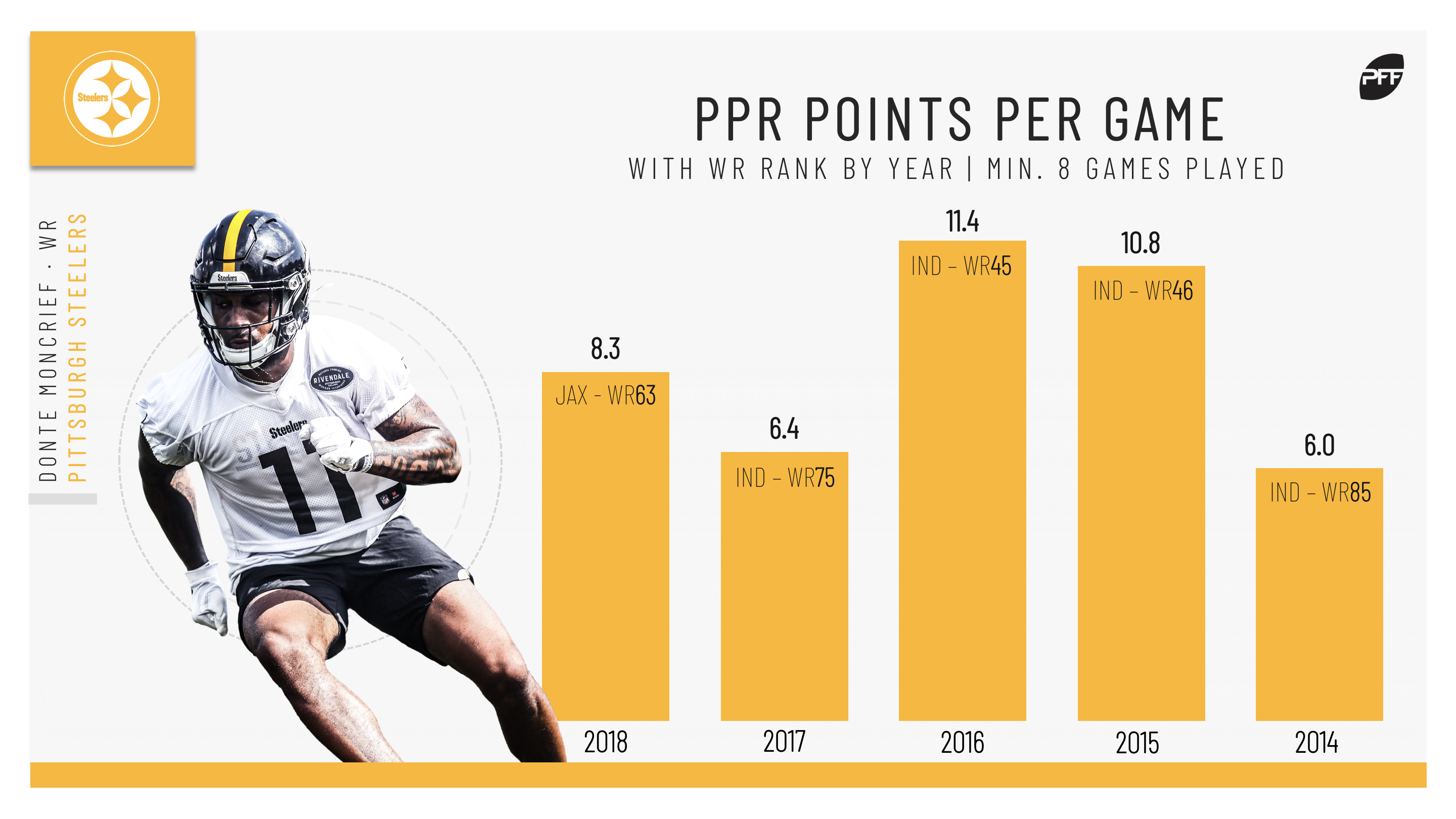 Even though there’s been a lot of love for James Washington from the fantasy community, Pittsburgh has made it very clear with their usage that Moncrief is clearly ahead of the second-year Washington on the depth chart. Moncrief was on the field with JuJu Smith-Schuster for the Steelers’ first 15 offensive plays in their third preseason contest, and Washington didn’t come on until Moncrief and Smith-Schuster’s days were done. While Moncrief had a lackluster stint in Jacksonville last year, he screams breakout potential as the No. 2 in Pittsburgh.

A late addition to the list, Brissett now slides into the starting job following Andrew Luck’s surprise retirement. While Brissett’s 2017 season as a starter wasn’t anything to write home about, he did manage to finish as the No. 21 fantasy quarterback. With some modest improvement in his passing numbers, Brissett has the chance to crack the top 20 this season, and you won’t have to play that price for him in drafts.

There’s opportunity in the 49ers wide receiver corps given the recent news that Dante Pettis is playing for a spot just like everyone else. Pettis was on the field before Samuel in Week 3 of the preseason, but both played into the third quarter. Samuel has flashed major upside in the preseason. While rookie wideouts aren’t always the best fantasy options, Samuel could be a sneaky player to emerge and seize the opportunity.

The Ravens didn’t play most of their starters in their third preseason game, but Boykin got plenty of run early on. The former Notre Dame wideout has flashed his size and speed in the preseason and certainly looks the part of an NFL receiver. Like Samuel, there’s plenty of volatility with Boykin, but he’s in a position to hit the ground running and offers big-play upside.

Though he was the third wideout the Cardinals selected in April’s draft, Johnson has emerged as the best bet of that trio to make an impact in his rookie season. Hakeem Butler landed on injured reserve, and reports from Cardinals camp suggest Andy Isabella is still a work in progress. By contrast, Johnson has received glowing reviews. The rookie hauled in seven passes for 85 yards in the Cards’ third preseason tune up. While Johnson did play well into the fourth quarter, he did see 22 snaps with Kyler Murray under center. Larry Fitzgerald and Christian Kirk are locked in as the top two options in Arizona, but Johnson has emerged as a dark horse for the No. 3 job.

With Marqise Lee seemingly always banged up, the door is open for Chark to assume the No. 2 duties in Jacksonville. The former LSU wideout has taken advantage of the opportunity and has all but cemented himself into that role. While he didn’t show up in the box score of the Jags’ third preseason game, he did work exclusively with Nick Foles and the first-team offense. Chark is still somewhat raw for the position but his size and speed make him a very interesting late-round dart in deeper leagues.

Somebody has to catch the ball for the Redskins. McLaurin may just be that somebody if things break right in 2019. The speedster out of Ohio State played 17 snaps with the first-team offense in Week 3 of the preseason but was held catchless in that contest. He’s far from a sure thing, but given the state of the Redskins wide receiver corps, there’s certainly a good chance we see McClaurin on the field early and often in the regular season. 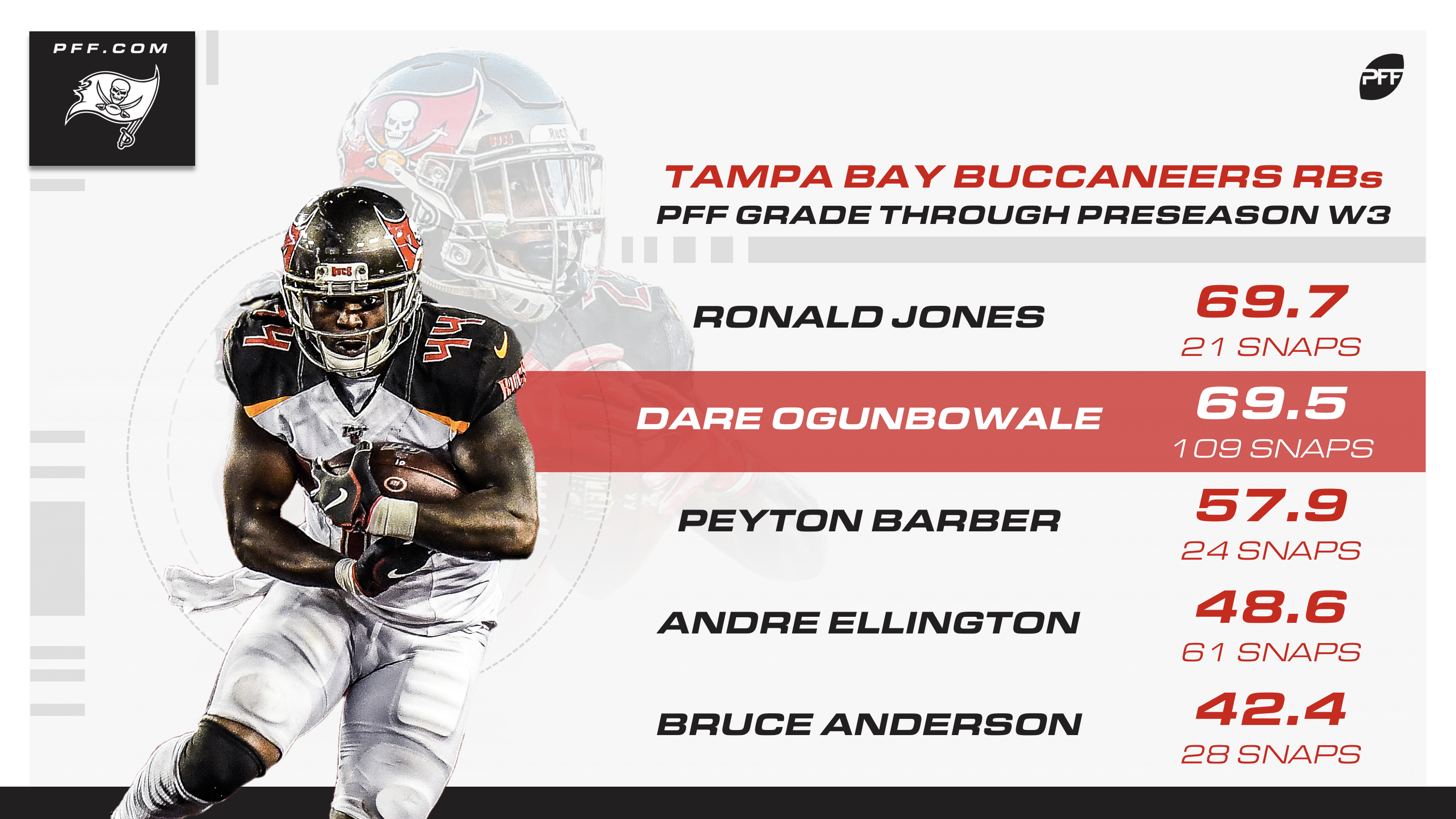 Sorry, Bruce Anderson truthers. It looks like the deeper name to know in the Bucs’ backfield is actually Ogunbowale. The former Wisconsin back entered the league in 2017 as an undrafted free agent and has bounced around on the Texans, Bucs, and Redskins practice squads ever since. A former cornerback at the beginning of his college career, Ogunbowale has decent chops as a receiver. He’s shown that ability in the preseason with five catches for 73 yards. Ronald Jones is still the favorite for that role in the Bucs offense, but don’t be shocked if Ogunbowale leap frogs him.