As we head into Week 13 of the NFL season, it’s time again to take a look at defense/special teams units worth streaming in fantasy football

This is it. In almost every league, Week 13 marks either the end of the regular season or the start of the playoffs, meaning each and every lineup decision takes on a new level of importance.

As one of my favorite local color commentators — Mickey Redmond — likes to say, “This is no place for a nervous person.” It’s also one of my favorite times of year to be able to offer up my two cents here at PFF. There is nothing like playoff action to get the juices flowing.

It’s officially time to say goodbye to the bye weeks, so we have a full complement of DST available. 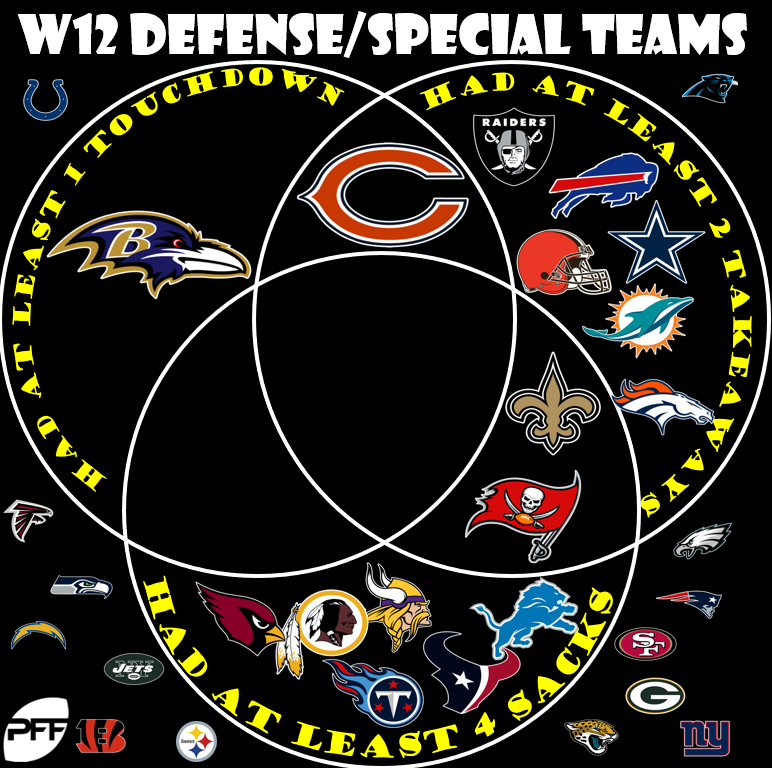 Let’s take a look at the DST suggestions for Week 13.

The last time we saw the Rams DST unit was in their Week 11 shootout with the Kansas City Chiefs, when they allowed 51 points. They were also the top-scoring fantasy DST unit in most formats, putting up three sacks, five turnovers, and two defensive touchdowns. The Lions offense continues to give up big numbers to opposing DST as the Bears had two sacks and a pair of interceptions, with one returned for a touchdown, on Thanksgiving. Detroit has allowed double-digit fantasy numbers to the opposing DST in three of the last four games. Look for a banged-up Lions offense (Marvin Jones has been placed on IR) to be dominated by Aaron Donald and Ndamukong Suh this week. 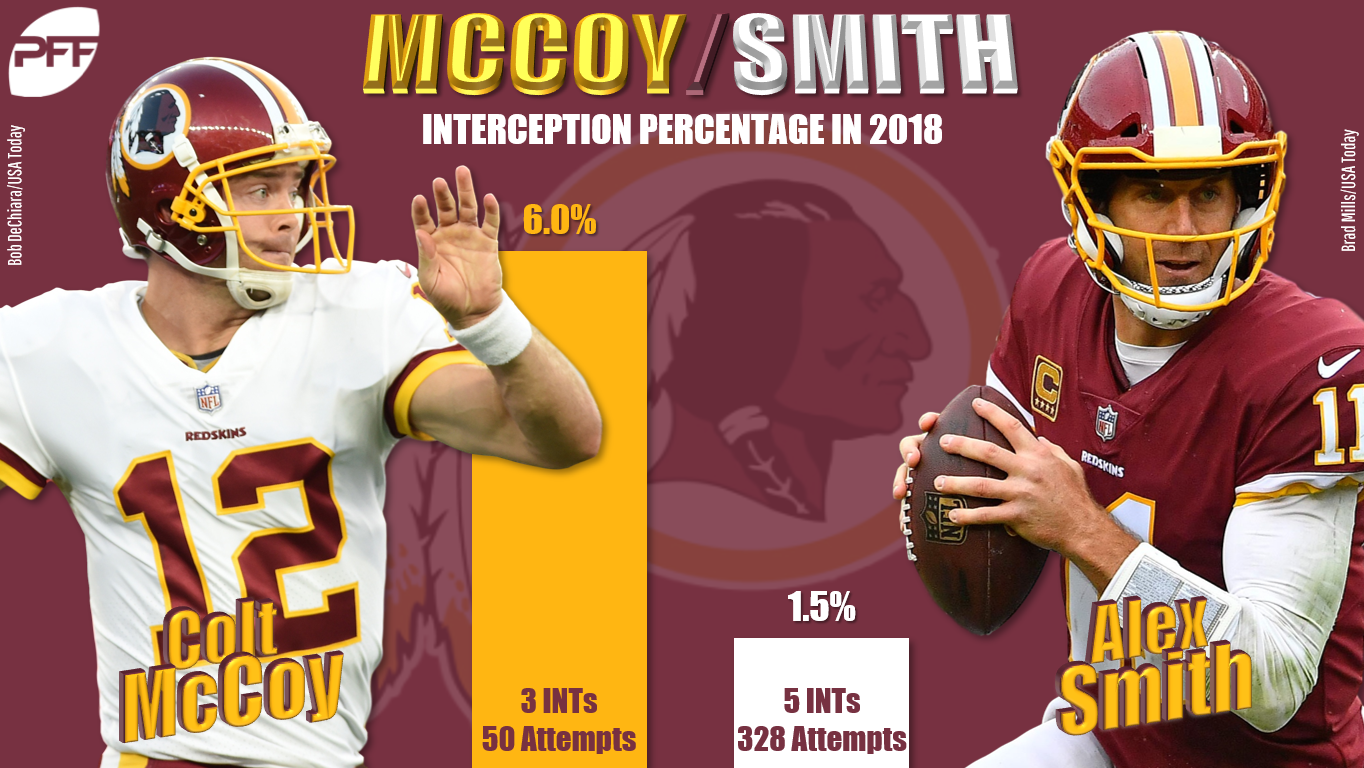 The season-ending suffered by Alex Smith is a crippling blow to the Washington offense. There is a reason Colt McCoy has been a career backup and he showed why in the Thanksgiving loss to the Cowboys. McCoy threw three interceptions and was sacked three times as Dallas put up top-10 fantasy defense production. In their last two games, the Redskins have given up eight sacks, five turnovers, and a defensive touchdown. The Eagles had a modest Week 12, posting a pair of sacks and an interception against the Giants. They were credited with 16 total quarterback pressures — look for that type of pressure to create some big plays in Week 13.

The Seahawks DST unit is coming off a quiet week as they managed a single interception against the Panthers in their Week 12 win. The matchup this week is simply too good to pass on, as the 49ers offense is banged up and struggling. It may be time to turn back to C.J. Beathard at quarterback as Nick Mullens has thrown four interceptions in the past two games while being sacked four times. If the 49ers do start Beathard, things are not likely to improve offensively as Beathard had two touchdown passes and three turnovers in his last two games. The Seahawks DST is in line for a bounceback Week 13 playing at home.

The Buccaneers are coming off a solid performance as they didn’t turn the ball over in a game for the first time in 2018 in their win over the 49ers. Let’s just say I don’t trust the streaky Jameis Winston to put up a repeat performance against a Carolina defense that is fighting to make the playoffs. The Panthers defense hasn’t forced a turnover in the last three weeks, but that should change in this juicy Week 13 matchup. In his last four games against Carolina, Winston has thrown three touchdown passes and turned the ball over a whopping eight times.

There are reports that the Falcons will be shuffling their offensive line this week after allowing six sacks to the Saints on Thanksgiving. Atlanta also turned the ball over four times in the loss and managed only 26 rushing yards. The Falcons have allowed 11 sacks in the past three games and 33 on the season. The Ravens DST got it done in every facet of the game in their Week 12 victory over the Oakland Raiders. Veteran outside linebacker Terrell Suggs returned a fumble 43 yards for a touchdown while defensive back Cyrus Jones chipped in with a 79-yard punt return for a score. Baltimore added three sacks for good measure and are poised for a big game at Atlanta this week.

This streaming selection is all about the matchup as we chase a turnover-prone rookie-led offense. Josh Rosen threw another interception in the Week 12 loss to the Chargers and now has thrown at least one in each of the past six games. On the day Rosen managed just 105 passing yards (he has only 241 over the past two weeks), completing just 12 of 19 attempts, and now has 11 interceptions on the season. This is a get-healthy matchup for a Green Bay DST unit playing at home trying to keep their slim playoff hopes alive.

Surprisingly, the Chiefs DST unit was also a top-10 performer in the Week 11 scorefest against the Rams. In that game, Kansas City sacked Jared Goff five times while also forcing a pair of turnovers and scoring a defensive touchdown. The return of a healthy Justin Houston has bolstered the Chiefs’ pass rush as they are averaging 21 total quarterback pressures over their last three games. Over that time the Chiefs have been a top-10 fantasy unit with 12 sacks, five turnovers, and that defensive score. The Raiders will need to worry about the special team aspect this week as Tyreek Hill is capable of taking a punt the distance just as Cyrus Jones of Baltimore did against them last week.

This is the short-and-sweet sleeper DST streaming option for Week 13. I am all about starting a DST facing a Cody Kessler-led offense that just fired its offensive coordinator. Even the less-than-stellar Colts DST should put up some nice numbers against a struggling Jaguars offense looking for answers.

It’s another short-and-sweet streaming DST option for Week 13. With Andy Dalton (thumb) done for the season, the Bengals will turn to Jeff Driskel at quarterback. Driskel has thrown 36 passes since joining the league in 2016 and faces a Broncos DST that just put up two sacks and four turnovers in their Week 12 win over Pittsburgh. Yes please.