We are pivoting slightly in our weekly fantasy football stock market approach here. Today, we’re taking a look at players rising or falling in the weekly rankings, with an eye to the coming Week 5 but also looking at the full season.

Each week before you can turn the page to your next fantasy football matchup you need to do a final assessment of your learnings and how they impact the value of players. It will set the stage for you in hitting the waiver wire, setting your lineups and maybe even hitting the trade block.

Here’s a look some fantasy rankings risers and fallers going forward as we close out Week 4 by position ranked by amount of increase:

The offseason hype finally started to come to life in Chicago as Trubisky threw for 354 yards and six touchdowns against the hapless Bucs’ secondary. The second-year quarterback boasted a league-best 11.8 average depth of target in Week 4 and even added 53 rushing yards on three carries. … Luck finished as QB3 this week as he threw for 464 yards and four touchdowns on 40-of-62 passing versus Houston. The last time he was a top-three fantasy scorer at the position came in Week 14 of 2016, it was also against the Texans. … Since his Week 1 dud against the Eagles, Ryan has been on fire. Over his last three starts the Falcons’ signal caller 355 yards per contest with 10 TD passes during that span. … The Bengals’ offense looks pretty explosive in its own right and Dalton is at the center of that success. The Red Rifle is a top-10 fantasy quarterback right now and only Patrick Mahomes has thrown for more scores. … Don’t write off Mariota just yet. He warrants fantasy consideration after he threw for 344 yards and two touchdowns and rushed for 46 additional yards on 10 carries. That rushing floor makes him a viable bye-week filler.

Michel didn’t disappoint in his first full week in the role as the Patriots’ lead back. The rookie rushed for 112 yards on 25 carries and scored his first career touchdown. With Rex Burkhead now on IR, Michel has a RB2 floor with top-10 upside. … It was only a matter of time before Jones flashed his playmaking ability. He ran for 65 yards on 13 carries (5.9 YPC) and pulled in his lone target for 17 yards. No running back with more than 10 carries has a better elusive rating (182.7) than Jones on the season. … Matt Nagy’s game plan finally put a focus on incorporating Cohen into the offense. The result was him getting 20 touches for 174 total yards and a score. He offers huge upside and showed us on in Week 4 what his fantasy ceiling looks like, but his floor is volatile. … The Bucs had Jones active this week and he actually got 10 carries but managed just 29 yards against the Bears. It remains to be seen who Dirk Koetter turns to after the team’s Week 5 bye, but in deeper leagues Jones should be rostered. … It appears that after rushing for 21-101-2 in Week 4 fill-in duty, Davis has earned an increased role in the Seattle backfield.

The Titans’ passing game came to life this week with both Davis and Taylor getting in on the action. Davis continues to see a high volume of passes coming his way with 39 targets (ninth), including 15 in Week 4. Taylor flashed in training camp and with Rishard Matthews now out of the picture he is going have an expanded role. Taylor caught seven balls for 77 yards and played a season-high 46 snaps against the Eagles. … On the other side of that matchup, Jeffery made his debut and delivered a top-10 fantasy finish as he reeled in eight of his nine targets for 105 yards and a TD. With Jeffery and Carson Wentz now healthy look for some solid fantasy performances ahead. … After Thursday night’s fireworks it seems possible that Rams could have three top 25 fantasy wideouts this season. Brandin Cooks has emerged as the top producer, but Woods and Kupp are viable weekly WR2 options at this point. … Rookie Coutee was targeted 15 times and turned it into 11 catches for 109 yards while producing an 8.7 RAC. Targets could be tough to come by in that receiving corps, but Coutee clearly is earning the trust of Deshaun Watson. 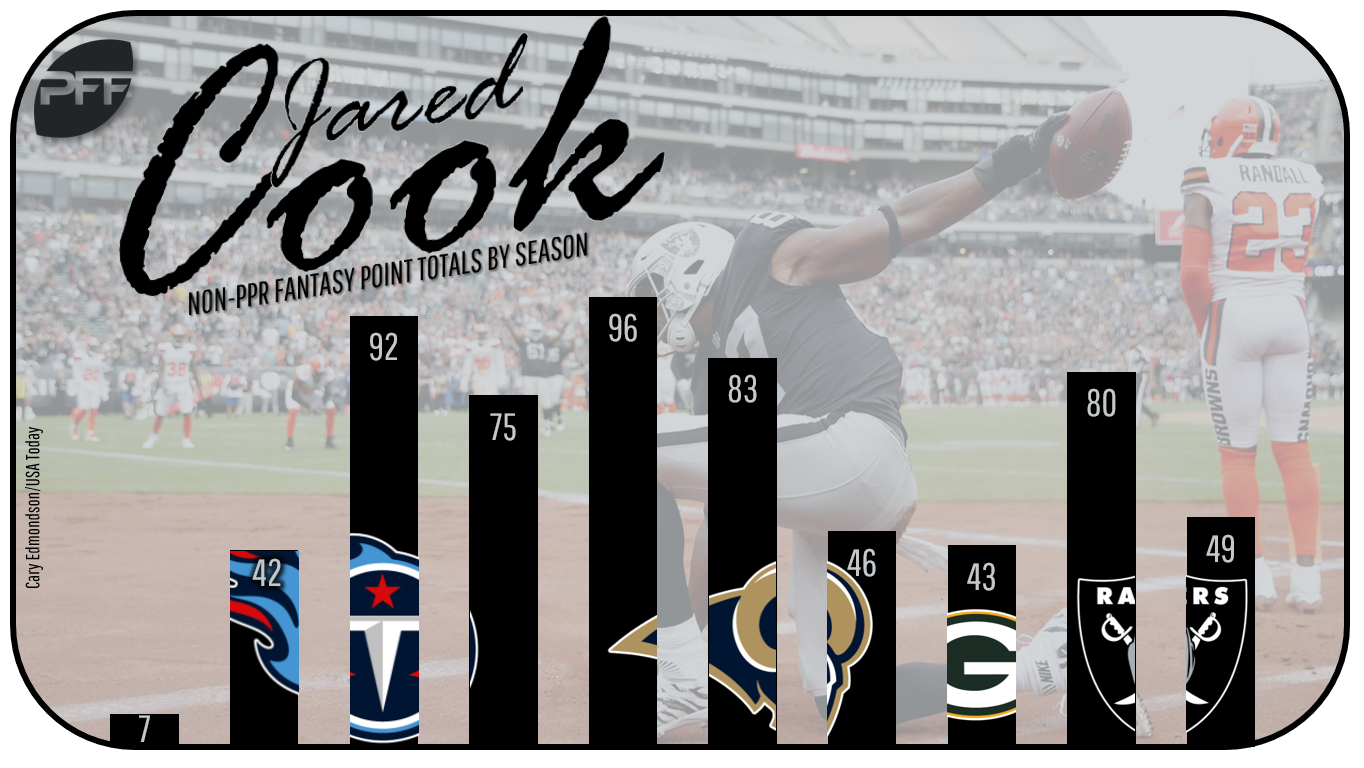 After another blowup performance, Cook finds himself as fantasy football’s top tight end after four weeks. He caught 8 of 12 targets for 110 yards and pulled in his first two touchdowns of the season. With his value at its peak, it may be time to sell high. … Don’t write off Kittle as a TE1 option just yet. He didn’t skip a beat with C.J. Beathard, his former college teammate at Iowa, taking over for the injured Jimmy Garopollo. Kittle caught six balls for 125 yards and a TD against the Chargers. … Brate has now scored in back-to-back games and with O.J. Howard (MCL) out 2-4 weeks look for him to see an increase in snaps and targets.

The Fitzpatrick hot streak came to an end in the Windy City as the Bears routed the Bucs, 48-10. Fitzpatrick was pulled at the half and finished with 126 yards and a pick. He can be safely dropped from rosters. … After finishing as QB1 last season, Wilson has finished as QB7, QB14, QB18, and QB24 in the first four weeks. He enters Week 4 as QB20 on the season. Hopefully as Doug Baldwin gets back in mix his numbers will pick up. … Brees got off to a great start, but he came crashing back down to earth in his first games outdoors of the season. He was held without a TD pass after throwing for multiple scores in his first three contests. The schedule gets tougher now. That coupled with Mark Ingram returning expected to cause a dip in his passing attempts suggests regression is ahead for Brees.

For the fourth straight week, Drake experienced a dip in production. In Week 4 his fantasy value may have hit rock bottom. Despite a game script that suggested he would’ve seen an increased role, Drake managed just four touches for 26 yards and while playing on only 46 percent of Miami’s snaps. … Owners who rolled Fournette out were disappointed as he aggravated the hamstring injury that kept him out the previous two weeks. He could be in line for another extended absence if Jacksonville opts to rest him. … Cook returned in Week 4’s loss to the Rams, but he was one of the few players in the game that actually failed to deliver fantasy goodness. Cook managed only 20 yards on 10 carries and was on a snap count. He clearly is not 100 percent and could suffer a setback at any time. … It could be the end of the line for Barber as the Bucs’ starting running back after the team gets back from its Week 5 bye. With 148 yards on 50 carries and only 2.4 yards after contact, he simply isn’t getting the job done. … After a blowup in Week 1 and a moderate Week 2 effort, Conner has turned in back-to-back duds. Game flow certainly played a hand in his usage versus the Ravens, but nine yards on 19 carries just isn’t getting it done. Reports came out Monday night that Le’Veon Bell is expected to return during the Steelers’ Week 7 bye, so the end may be near for Conner as a fantasy starter. 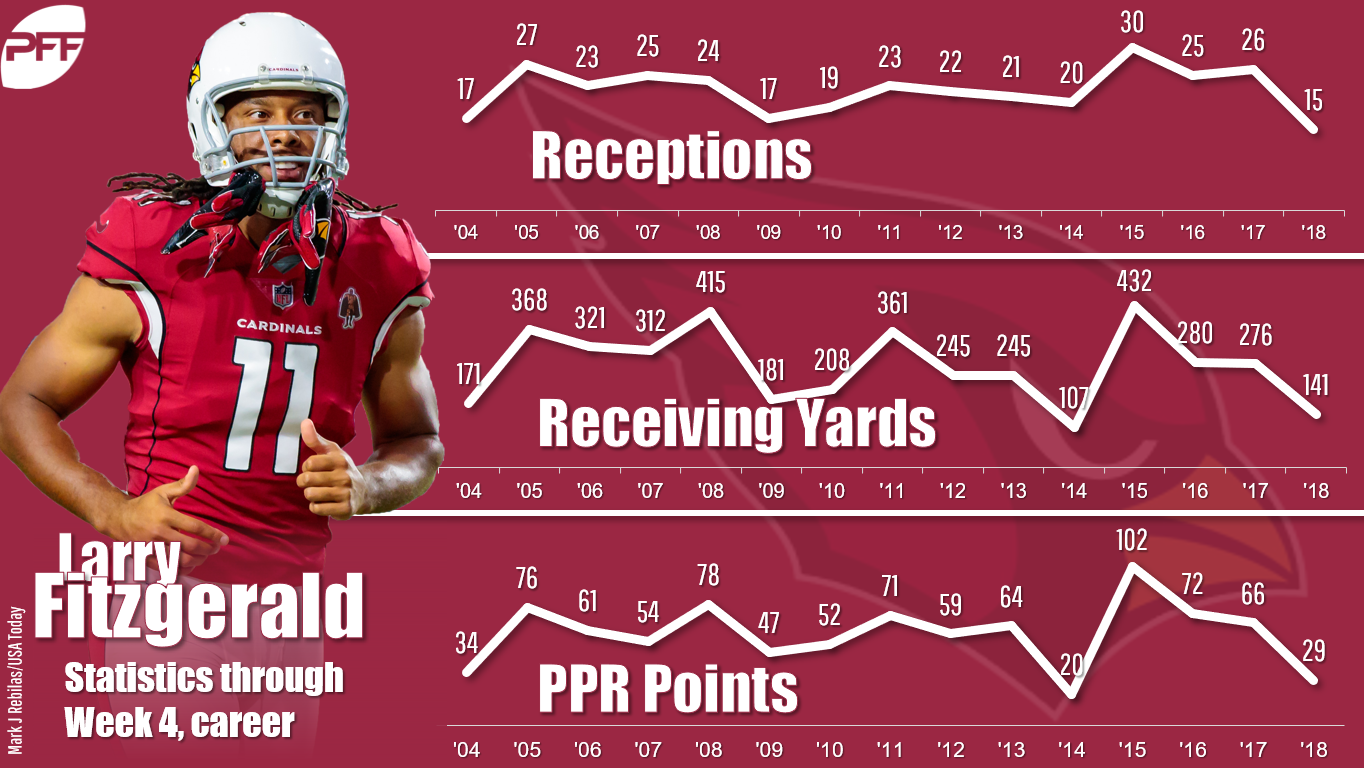 It’s painful to watch, but it’s hard to continue to endorse Fitzgerald as a fantasy starter right now. The veteran has failed to reach six PPR fantasy points in three of his four games this season and has yet to score in 2018. He has only made his way to the end zone in one of his last eight contests dating back to last season. … After being ruled inactive again in Week 4, it’s time to find a better use of a roster space in most redraft leagues than Parker. He’s now missed three of four games this year with finger and quad injuries. … With Kenny Golladay continuing to get more involved in the team’s passing attack, Jones’ targets and snaps are dropping. He’s still getting plenty of end-zone targets and is factor in the red zone, so he’s best served as a WR3/flex play. … Marshall is starting to fade out of the picture in Seattle’s offense. With Doug Baldwin returning and the team wanting to get David Moore in the mix at wide receiver, look for the veteran’s snap count to plummet.

Bengals’ tight end Eifert suffered a gruesome ankle injury in Week 4’s win at Atlanta. It was disappointing as he was just settling back in as a fantasy producer. … Gronkowski has been struggling and now he suffered an ankle injury. With the Patriots set to play the Colts on Thursday he could be hard-pressed to play in Week 5. … Injuries also took their toll on Howard (MCL), who will be out 2-4 weeks, and Dissly (torn patella), who was lost for the season.