Each week during the 2018 season we examined the evolving fantasy football values or players based on the developments of the previous week to begin our preparation for the upcoming week.

In this edition of our “risers and fallers,” we’ll take a look back at the final third of the NFL regular season and see whose performances had both positive and negative impact on the fantasy values of individuals as we begin to shape our 2019 rankings.

Mayfield took off with Freddie Kitchens calling the plays after the coaching change, completing 68.4% of his passes for 8.6 yards per attempt. He finished the year with 27 passing touchdowns, the most ever by a rookie, and threw for 3,725 yards. … From Week 12 on no quarterback put up more fantasy points than Allen. A ton of his success during that span came on the ground as he rushed for a league-best 476 yards and five touchdowns. His league-worst 64.0% adjusted completion percentage during same span is concerning, but with that type of rushing production he can be an elite fantasy asset. … Jackson also was dynamic as runner after he took over in Baltimore. The rookie produced 0.75 fantasy points per dropback, the best mark during the PFF era. 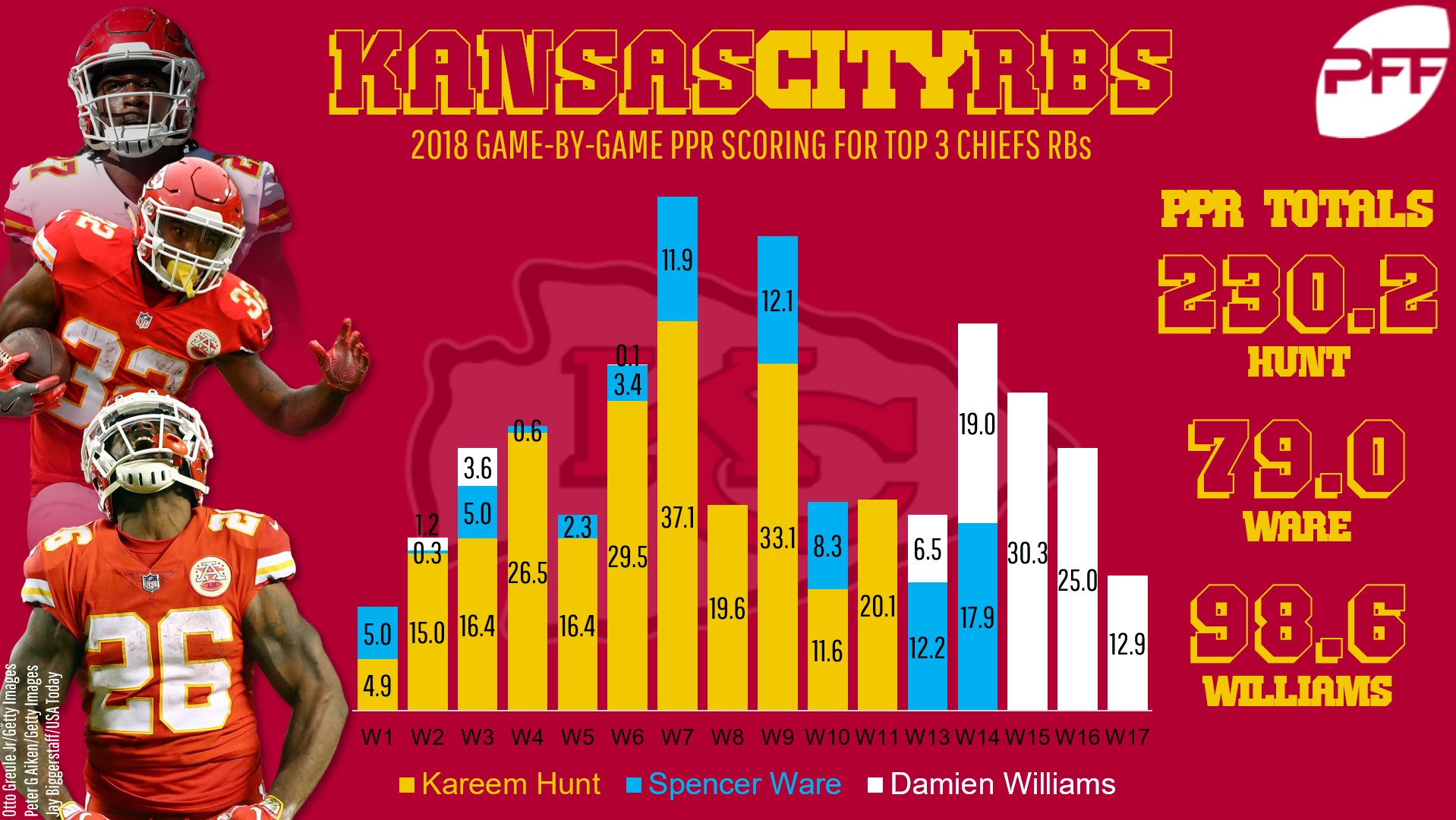 Nobody helped their fantasy value more in December than Henry. He blew up for 238 yards and four touchdowns in Week 14 and 170 more yards with two more scores in Week 15. Henry registered 585 and seven touchdowns rushing in his last four contests after tallying just 474 yards and five scores during his first 12 games. … Mixon was the lone bright spot for the Bengals offensively down the stretch in 2018. He became the team’s first 1,000-yard rusher since 2014. Only Henry rushed for more yards from Week 12 on and Mixon added 19 catches on 21 targets for 119 yards during that time. … Chubb finished just four yards shy of 1,000 yards despite not becoming the starter until mid-October and provided solid RB2 fantasy production while earning the highest PFF grade (88.1) of any running back this season. … Williams proved to be a fantasy league-winner off the waiver wire after Kareem Hunt got cut and Spencer Ware got injured. Over the last three weeks of the regular season he totaled 322 yards and four touchdowns on 48 touches (0.94 fantasy points per touch) and the team gave him a two-year contract extension to boot.

Hilton was WR2 in Weeks 11-16 despite being far from 100% healthy, with a 12.69-yard average depth of target, 13.2 yards per target and 0.42 fantasy points per snap. … Anderson was one of the best receivers during the fantasy playoffs, scoring in each game Weeks 14-16. He pulled in 20 of his 28 targets for 312 yards. … Before suffering an MCL injury in Week 16, Pettis was on a tear down the stretch for the 49ers with four touchdowns and 338 yards on 16 catches. After the team traded up to grab him in the 2018 draft it appears as if he’s primed for an even bigger role in 2019 and with Jimmy Garoppolo coming back that could lead to a big fantasy splash ahead. … Foster got on the radar late in the year when he registered 90 yards and or a touchdown in five of his last seven contests. The undrafted rookie has worked his way into the redraft conversation for 2019. 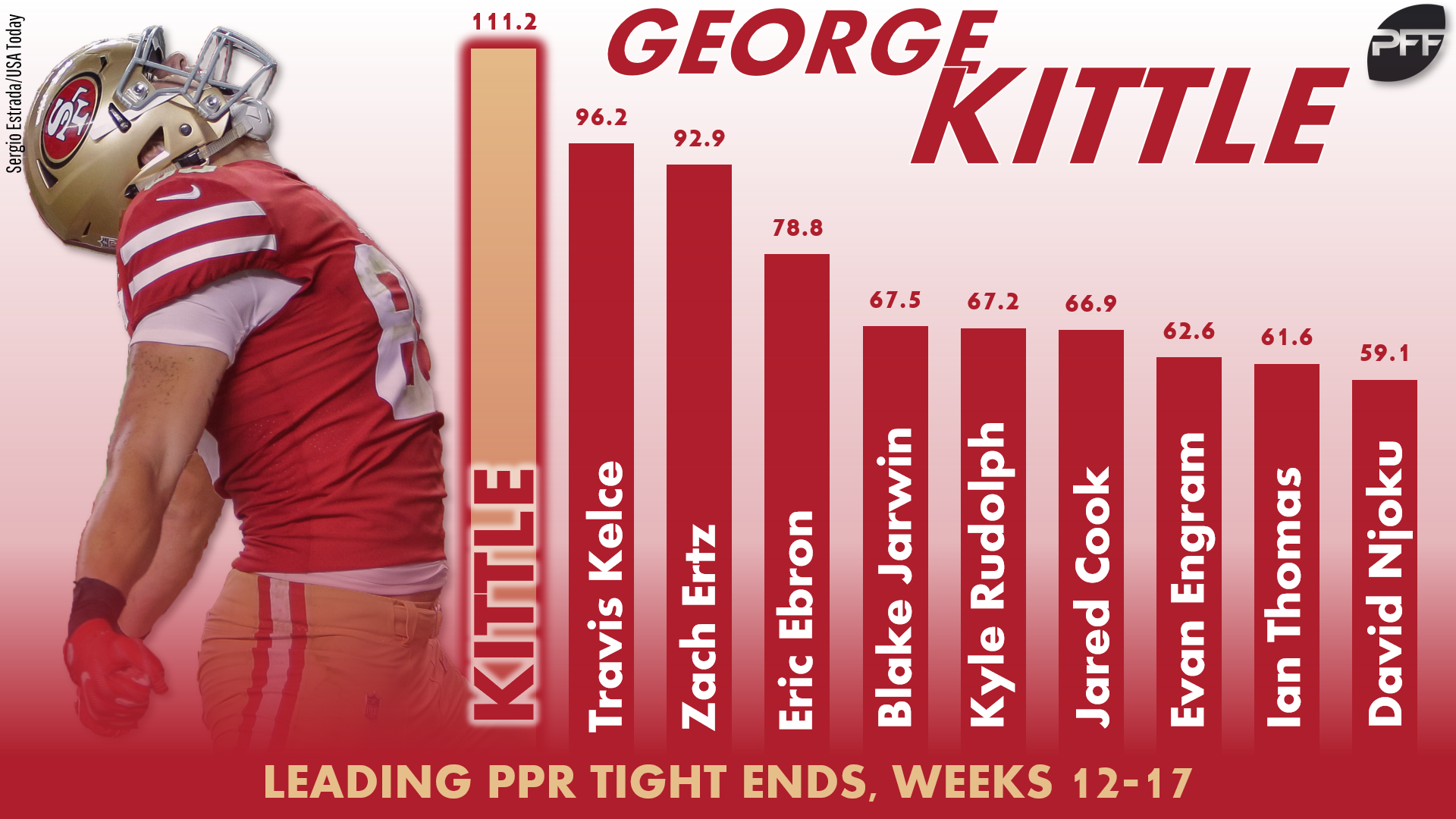 Kittle delivered historic numbers during his second season as he set a new TE single-season record for yards with 1,377 yards. Over the last six weeks of the year he outscored the next best tight end by over three fantasy points per game as he was targeted 59 times and pulled in 38 balls for 602 yards. … Engram benefited greatly from the injuries in the passing game late year for the Giants as he was targeted 31 times. During that span he finished as TE4.

The Saints’ offense sputtered a bit down the stretch with Brees throwing one TD or zero in each of his last four starts and he had a stretch of four games (Weeks 12-16) which he didn’t reach 205 passing yards. … Opposing defenses focused on taking away the deep ball late in the season against the Rams and Goff’s numbers plummeted. He ranked as QB19 from Week 12 on with as many TD passes (6) as interceptions over that span. … Stafford will enter 2019 with plenty of questions and new offensive coordinator calling the plays. The veteran averaged just 187.7 passing yards per game with a 5:5 TD-to-interception ratio over his last five games and two of those TDs came in Week 17.

Fournette took a step backward during year two, which included seven games missed due to an injury and another for a suspension. He failed to reach 100 yards on the ground in a single contest and averaged 41.6 yards per game on 43 carries over his last three starts. … Over the last six weeks Johnson finished with just 448 total yards on 108 touches while averaging 3.46 yards per attempt. … Ingram never found his 2017 form after missing the first four games of 2018 due to a PED suspension and is now set for free agency this offseason. He really tailed off once Week 12 hit, as only the No. 36 PPR running back from that point to the end of the year. 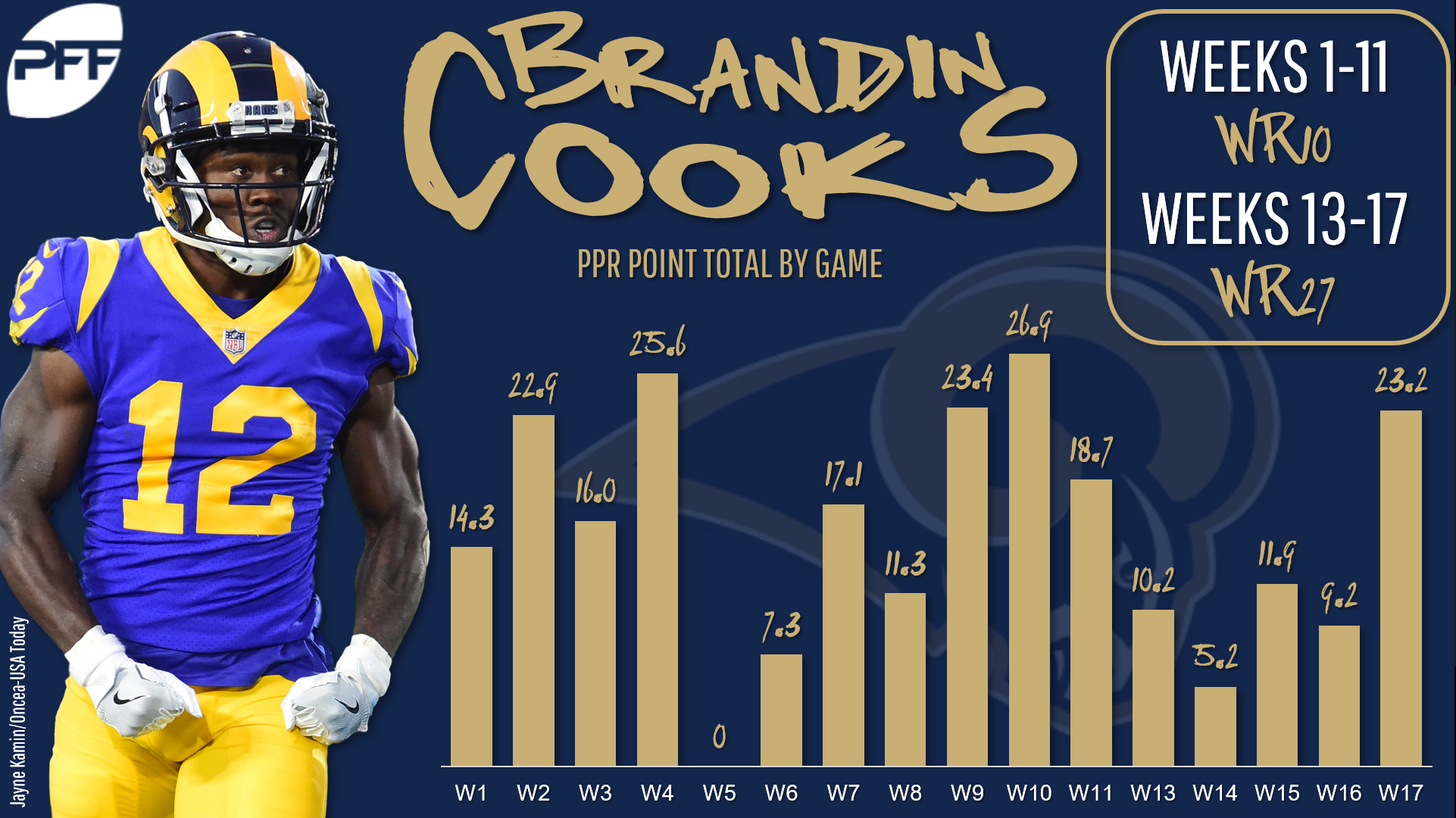 Despite missing the last four games of the season with various injuries, Beckham still managed to reach 1,000 yards. However, the durability concerns are legit. He’s only played all 16 games once in four pro seasons and has now missed 17 games in total due to injury. … Cooks tallied just 240 yards on 21 catches and 29 targets and two touchdowns over his last five outings. Two of those scores came in Week 17. Before that he hadn’t found his way into the end zone since Week 9.

Burton managed to score just two touchdowns over his last eight games and didn’t break the 40-yard mark once in that time. Given the hefty contract he was given this offseason, it’s hard to imagine him fading out of the Bears’ offense in 2019, but owners shouldn’t invest as heavily. … McDonald produced career-best marks across the board, but a second-half swoon leaves some doubt on how to view the tight end heading toward 2019. He didn’t have more than four catches or 50 yards in a single contest after Week 8.