Each week in this space, we’ll be taking a look back at Sunday’s games to find five of the most important stats for fantasy football owners going forward. With 13 of 14 games from NFL Week 7 in the books, here are the five stats you need to know:

1. On 69 carries, Kerryon Johnson totals 444 rushing yards for the Detroit Lions. On just three fewer carries (66), all other Lions running backs combine for only 198 rushing yards. 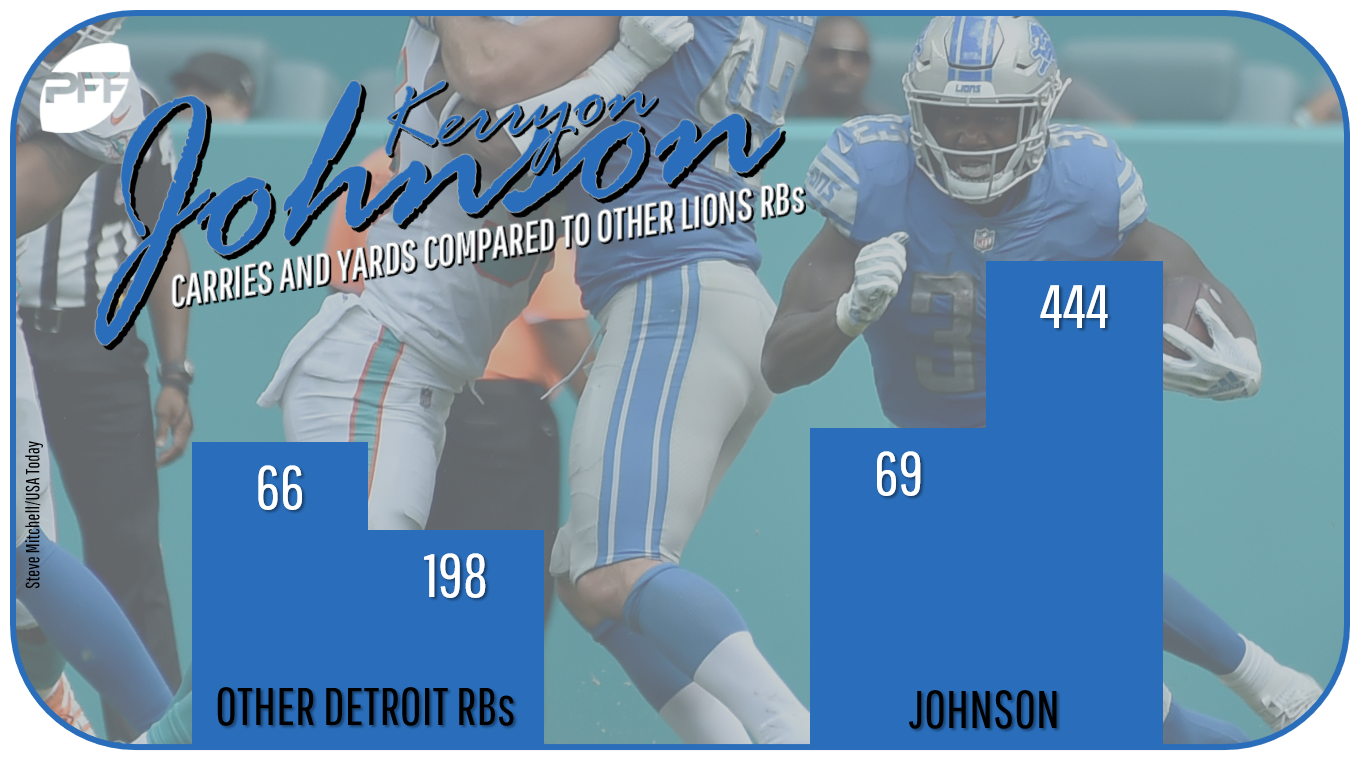 Despite ranking second-best of 50 qualifying running backs in yards per carry average (6.43), Johnson is only averaging 12.3 fantasy points per game (22nd). While his efficiency has been off the charts, his usage has been extremely frustrating. He's only seen four of his team's 12 carries inside the 10-yard line, 16 of his team’s 49 targets out of the backfield, and has played on just 43% of the team’s snaps. That being said, there is cause for optimism. In Week 7, Johnson hit highs in snap share (59%), carries (19), percentage of team carries (63%), and percentage of team targets (66%). Granted, Johnson did benefit from the absence of Theo Riddick, but still, the increase in usage over LeGarrette Blount, at least, is encouraging.

2. Tampa Bay leads all teams in passing yards (2,261), despite playing in one fewer game than the Chiefs, Rams, Vikings, and the majority of teams. Their 2,261 passing yards is actually the second-most through six games all-time. Only the 2000 “Greatest Show on Turf” Rams finished better and by just 14 passing yards. If we included QB rushing yards (to compare total QB yards), Tampa Bay would be better by 129 total yards.

3. James White has led the Patriots in targets in five of their seven games this season. He currently ranks 16th among all players in targets (57) and leads the team by 22. He also ranks eighth among all flex players in fantasy points. 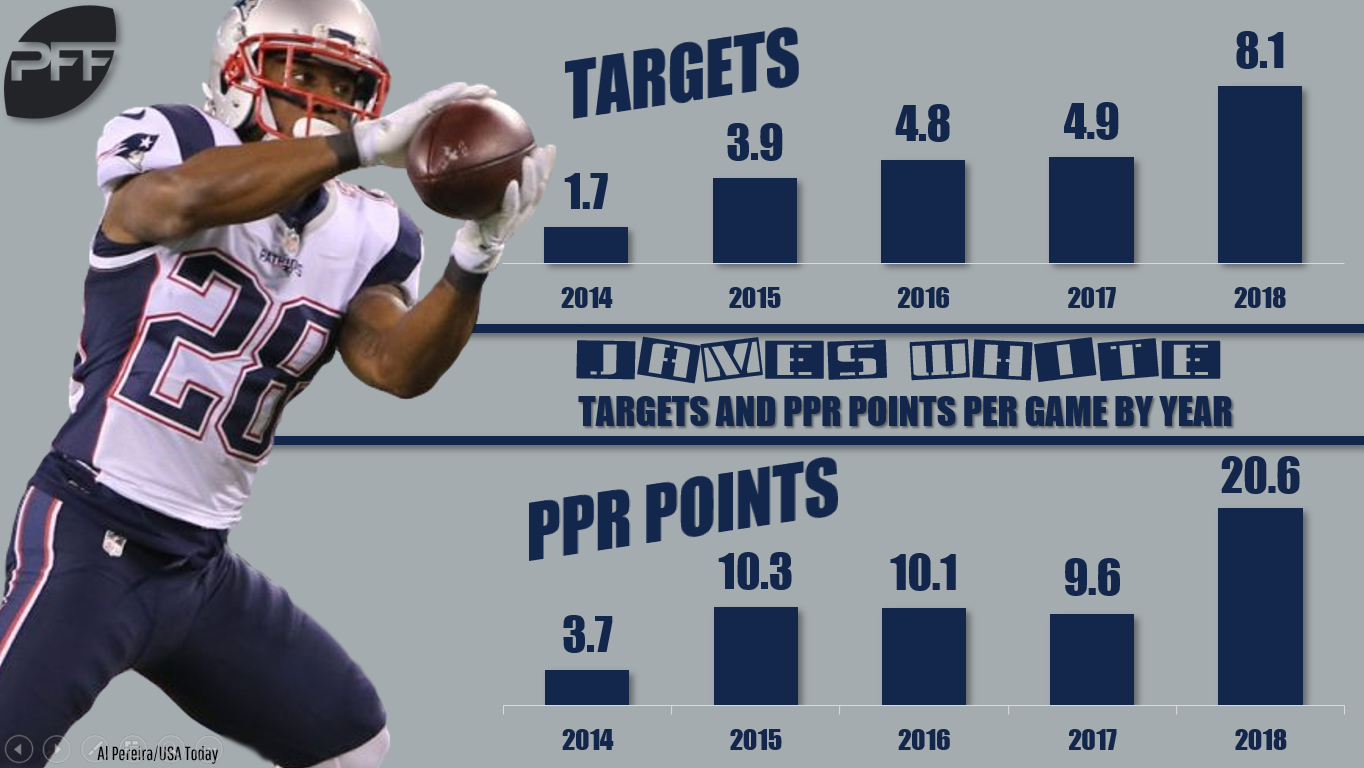 On Sunday, White saw a team-high 10 targets and a team-high 11 carries, combining to total 97 yards and two touchdowns. It might feel weird to say, but I think it’s time we embraced White as a mid- to low-end fantasy RB1. Fellow running back Sony Michel was also carted off the field in Sunday’s game against the Bears, which leaves Kenjon Barner as the only other running back on the roster. Until Michel returns, this should mean more rushing work for White, who leads all running backs in receiving fantasy points by 29.7 but ranks just 46th in rushing fantasy points.

4. Over the last four weeks, Mitchell Trubisky leads all players in fantasy points per game (34.1). Interestingly, his three best career games (in terms of fantasy points or passing yards) have all come over this stretch. Against Tampa Bay he put up 43.5 fantasy points, then 27.3 against Miami, and then 31.4 on Sunday against the Patriots. Throughout the rest of his career (spanning 15 games), he averaged just 11.9 fantasy points per game with highs of 21.3, 18.1, and 16.5.

It’s hard to say what exactly is going on here. Has Trubisky merely taken advantage of a soft spot within his schedule or has he, in this new offense, finally taken the next step as a quarterback? I’d say it’s way more of the former, and very little of the latter. Trubisky was our worst-graded quarterback on Sunday and actually ranks as our-worst-graded quarterback over this entire stretch. Tampa Bay ranks worst and New England ranks sixth-worst in fantasy points per game allowed to opposing quarterbacks. Though, to be fair, Trubisky has been running more and to good success — 17 rushes, 181 yards, and a touchdown over this three-game stretch. That’s going to boost his ceiling and floor, and he’s certainly someone worth rostering, but, I suspect, not someone worth going out of your way to acquire. 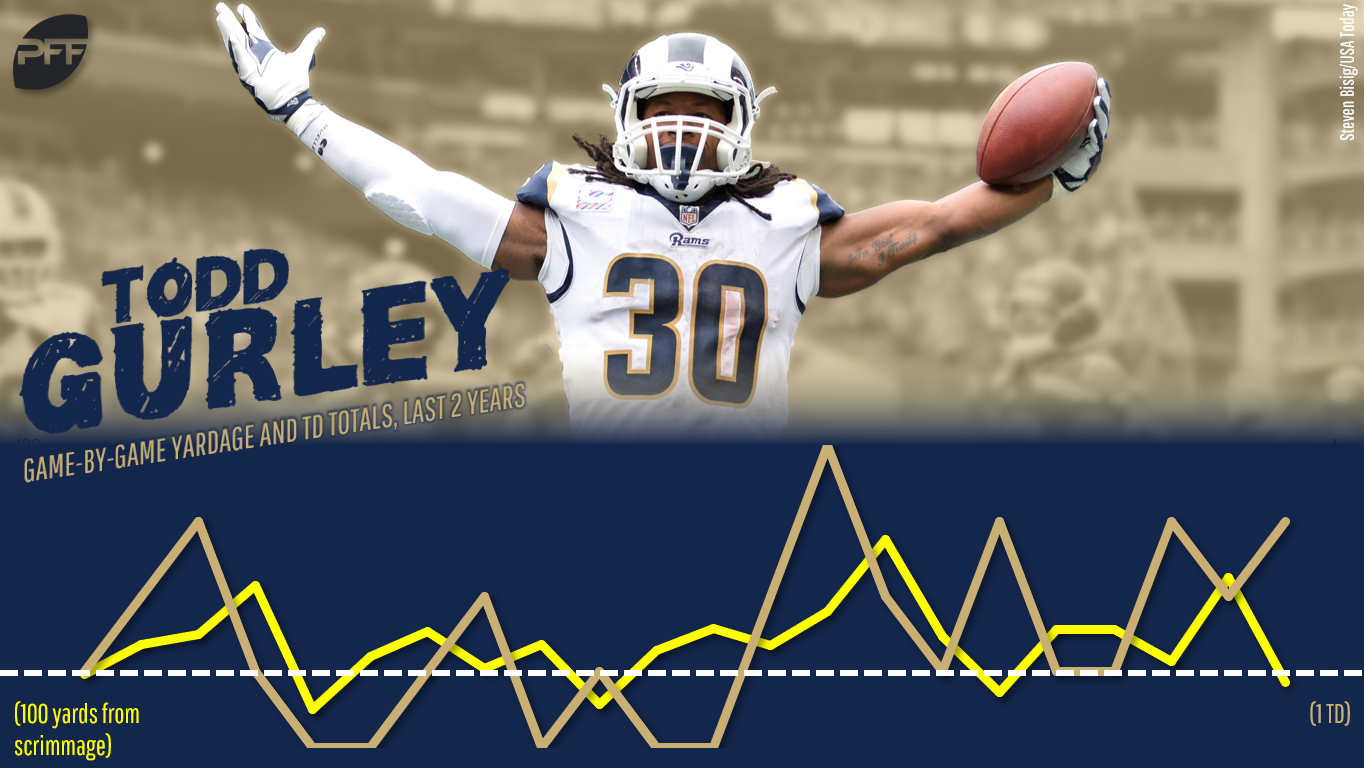 Gurley averages 32.8 fantasy points per game over his last 10 games. The Rams have the best offense in football and they run that offense through Gurley. There isn’t really much else to say. Not only is he the most valuable asset in fantasy but there’s a good chance we might be witnessing a historic LaDainian Tomlinson-esque fantasy season from him.