Each week in this space, we’ll be taking a look back at Sunday’s games to find five of the most interesting or most important stats for fantasy football owners. With 15 of 16 games from NFL Week 15 in the books, here are the five stats you need to know:

1. For four consecutive seasons (2015-2018), Julio Jones has led all receivers in yards per route run. This season, Jones ranks 11th (2.29). Michael Thomas leads all wide receivers (2.85) but, shockingly, still ranks behind a tight end and a running back. 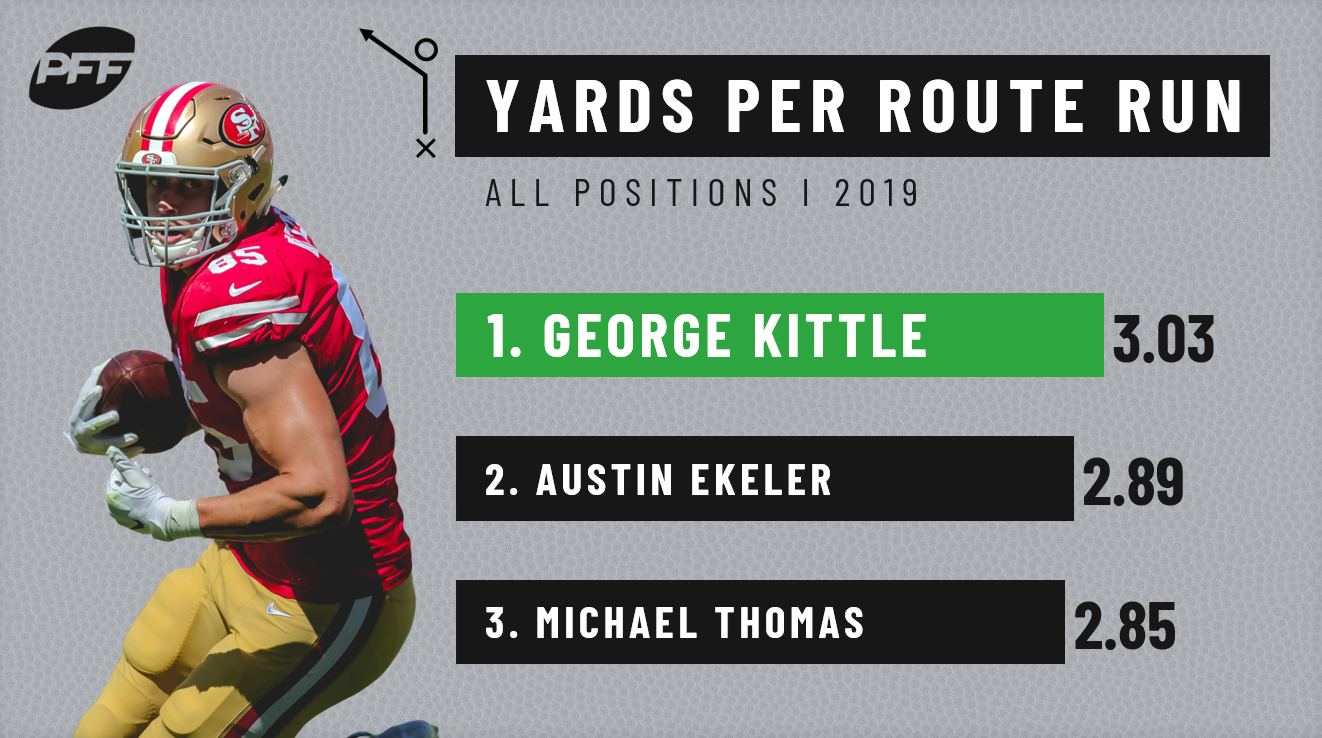 After leading all tight ends in PFF grade last year, Kittle now leads all players in PFF grade (93.8), with what would be the highest grade by any tight end in PFF history (2006-2019). Ridiculously, he’s doing this with a broken bone in his ankle.

Right behind Kittle, Baltimore’s Mark Andrews is averaging 2.80 yards per route run, which bests Kittle’s 2018 mark and ranks second among all receivers. Again, this is impressive, but not surprising — in fact, we predicted this would happen. Andrews set the rookie tight end record for yards per route run in 2018 (2.01), and his 2017 mark (2.63) still ranks top-three of the PFF College-era (2014-2019).

Ranking second overall behind Kittle is running back Austin Ekeler. He averages 2.85 yards per route run, which is a fair bit ahead of Alvin Kamara’s all-decade mark set in 2017 (2.76) and even further well ahead of the next-closest running back – Arian Foster 2011 (2.28). As I argued last week in this space, Ekeler’s 2019 season (and career) is historically great and absurdly efficient by almost every measure. More so than any other player, he should be your No. 1 trade target in dynasty leagues (ADP: RB26).

I also wrote, “He already looks every bit the part of a true NFL WR1 and a potential future superstar.” That looks even truer today, after scoring a touchdown and eclipsing 100 yards for the third time in four games on Sunday. Over this span he leads all wide receivers in both receiving yards (447) and receiving touchdowns (four).

3. Not to be outdone, fellow rookie wideout Terry McLaurin also eclipsed 100 receiving yards while adding a touchdown Sunday. Although Brown has McLaurin beat in the majority of stats, McLaurin comes close in yards per route run (2.11), and trumps Brown in yardage market share and PFF grade.

In fact – and despite missing one game due to injury – McLaurin has comprised 33% of Washington’s passing yards this year, which would break the rookie all-decade record set by Mike Evans in 2014.

Heading into the week, McLaurin’s receiving grade (82.7) also ranked above Brown (77.3), and, like his yardage market share numbers, was a historically great mark. Joining an all-star cast of names, McLaurin’s PFF grade ranks sixth-best by any wide receiver this past decade.

If you’re a subscriber, check out our updated grades on Monday afternoon to see if that number improved after a big Week 15.

On the league’s worst passing offense, McLaurin appears far more valuable in dynasty rather than redraft leagues. However, after feasting in a top-six matchup this week, McLaurin gets another top-six matchup next week, against the Janoris Jenkins-less Giants, who rank fifth-worst in fantasy points allowed to opposing wide receivers.

What’s happened to Brady? Has he finally lost his edge, at age 42? Is he hurt (he’s reportedly dealing with a shoulder injury)? Whatever the reason, it makes little difference for fantasy. Unless you’re absolutely desperate in a 2QB or Superflex league, Brady is no longer startable. Among Patriots pass-catchers, only Julian Edelman can be started with any confidence.

5. On Sunday, Kenyan Drake turned 22 carries and one target into 146 yards and four touchdowns. In total he scored 39.6 fantasy points, which was the most by any player this week, and the eighth-most by any non-quarterback in Week 15 (the fantasy semifinals) this past decade.

(If you can’t tell, yes, I’m very bitter, starting him on zero teams and playing against him in three different leagues.)