With another week behind us, and some more fresh stats to analyze, I’m here to help you with your toughest fantasy football start/sit decisions of the week for Week 9. 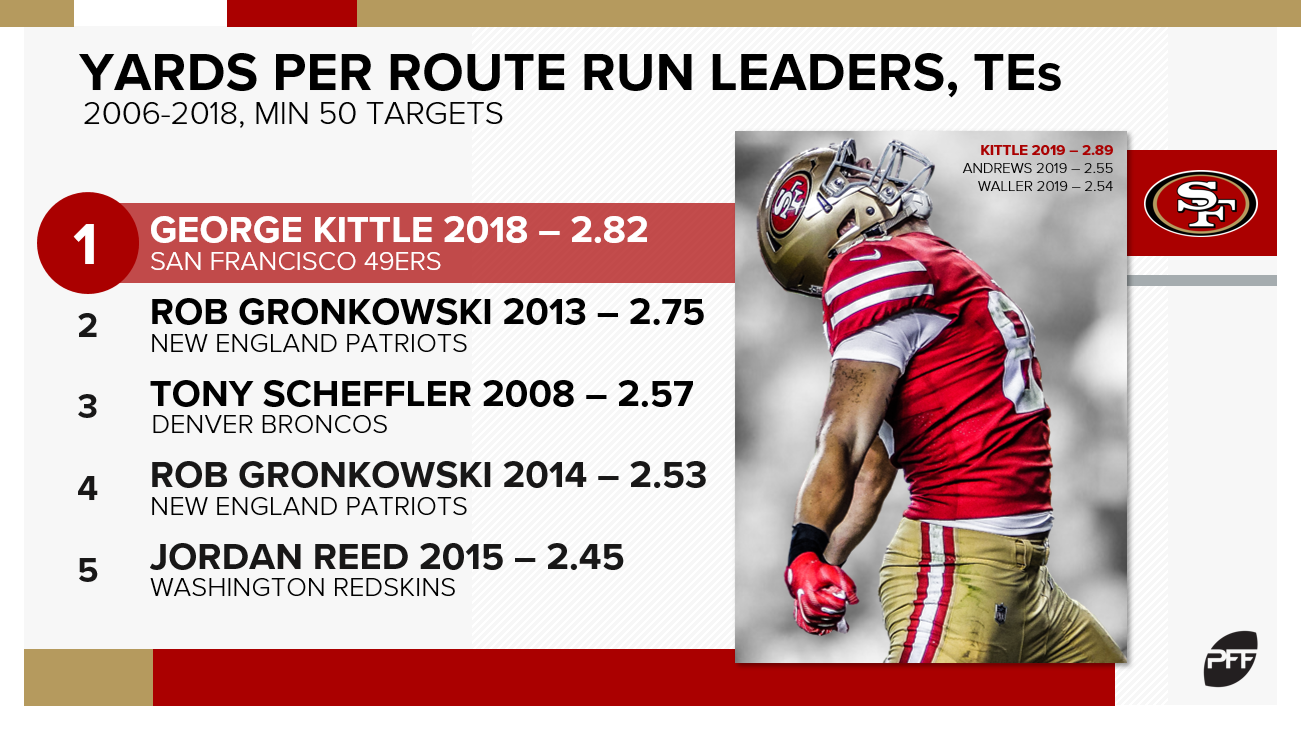 After setting the PFF-era record for yards per route run by a tight end in 2018 (2.82), Kittle is on pace to break it again (2.89). But in spite of the good yardage efficiency, Kittle ranks just seventh in fantasy points per game (13.4) — though he would rank fourth (16.0) if not for three touchdowns called back due to penalty. Expect a bit more luck moving forward, and better production — especially this week. Arizona has given up a league-high 21.5 fantasy points per game to opposing tight ends, almost double the league average rate (11.6).

While Stafford has a best possible matchup, Jackson’s matchup almost couldn’t be any worse. However, he’s also been fantasy’s most productive quarterback, averaging 25.4 fantasy points per game. And, since entering the league, he has the highest floor in fantasy, reaching at least 16.0 fantasy points in 13 of 14 career starts.

New England’s man-heavy scheme has also, like most man-heavy schemes, historically struggled against especially mobile quarterbacks. Over the past three seasons, New England has allowed six or more rushing attempts to an opposing quarterback five times. The quarterbacks in those games averaged 27.0 fantasy points per game. In all other 41 games, quarterbacks averaged just 15.1 fantasy points per game against New England. Keep in mind, Jackson is averaging 11.9 rush attempts per game. Maybe this is a stretch, but the bottom line is Jackson has been too good to bench, even in this tough matchup.

Lockett ranks 16th in fantasy points per game (16.3) with good consistency, having hit 75 yards or scored a touchdown in nine of his last 10 games. As Seattle’s WR1, he gets an ideal matchup, against a Tampa Bay defense that ranks worst in schedule-adjusted fantasy points per game to opposing WR1s. This also isn’t anything new from Tampa Bay – in each of the last three seasons, they rank bottom-seven against WR1s and bottom-10 against opposing slot wide receivers.

Bell has seen good volume, ranking 11th in XFP per game (15.2) and fourth in XFP market share (28.3%), but on an anemic Jets offense it hasn’t amounted to much. As bad as the Jets have been, it seems impossible for Bell to flop this week. For just the second time this season the Jets are favored, and the matchup is just about perfect for Bell. Miami ranks worst in rushing yards allowed per game (142.0, most by 15%), fourth-worst in yards allowed per carry (4.87), and fourth-worst in fantasy points per game allowed to opposing running backs (31.0).

Sanders was serviceable in his Week 8 49er debut, catching four of five targets for 25 yards and a score. However, against Patrick Peterson in shadow coverage this week, he’s better left on your bench. Despite routinely following the league’s best wide receivers, Peterson is the only cornerback to rank top-12 in PFF grade or top-15 in yards allowed per route in coverage in each of the last four seasons.

Like Sanders, Brown is a fade for similar reasons. If Peterson isn’t the league’s best cornerback, it's Stephon Gilmore, who, despite shadowing many of the league's best wide receivers, leads all (of 70 qualifying) cornerbacks in fantasy points allowed per target.

McLaurin was off to a hot start earlier in the season, and especially for a rookie, but has since cooled down. He's still playing well, ranking 12th in PFF grade, but Washington’s quarterback play has been abysmal, averaging just 109.2 passing yards and 0.4 passing touchdowns per game since Week 4. That means McLaurin is an easy fade this week, up against a Bills team that ranks second-best in fantasy points per game allowed to opposing WR1s.

Henry has had issues all year with uncertain gameflow and a lack of passing-down volume. That will be true again in Week 9, but he should be able to rise above it on volume (17 or more opportunities in 12 consecutive games) and matchup. After San Francisco’s 56.4 fantasy point explosion last week, Carolina is giving up the most rushing fantasy points per game to opposing running backs (19.4), while also ranking third-worst in yards allowed per carry (4.91).

Anderson has had a brutal schedule to start the year, facing a top-six defense (by schedule-adjusted fantasy points per game allowed to opposing WR1s) in three of his four games with Sam Darnold under center. However, he's seen good volume in each of these games, averaging 7.25 targets per game. In Week 9, finally in a softer matchup, Anderson should be started with confidence as a mid-range WR3. 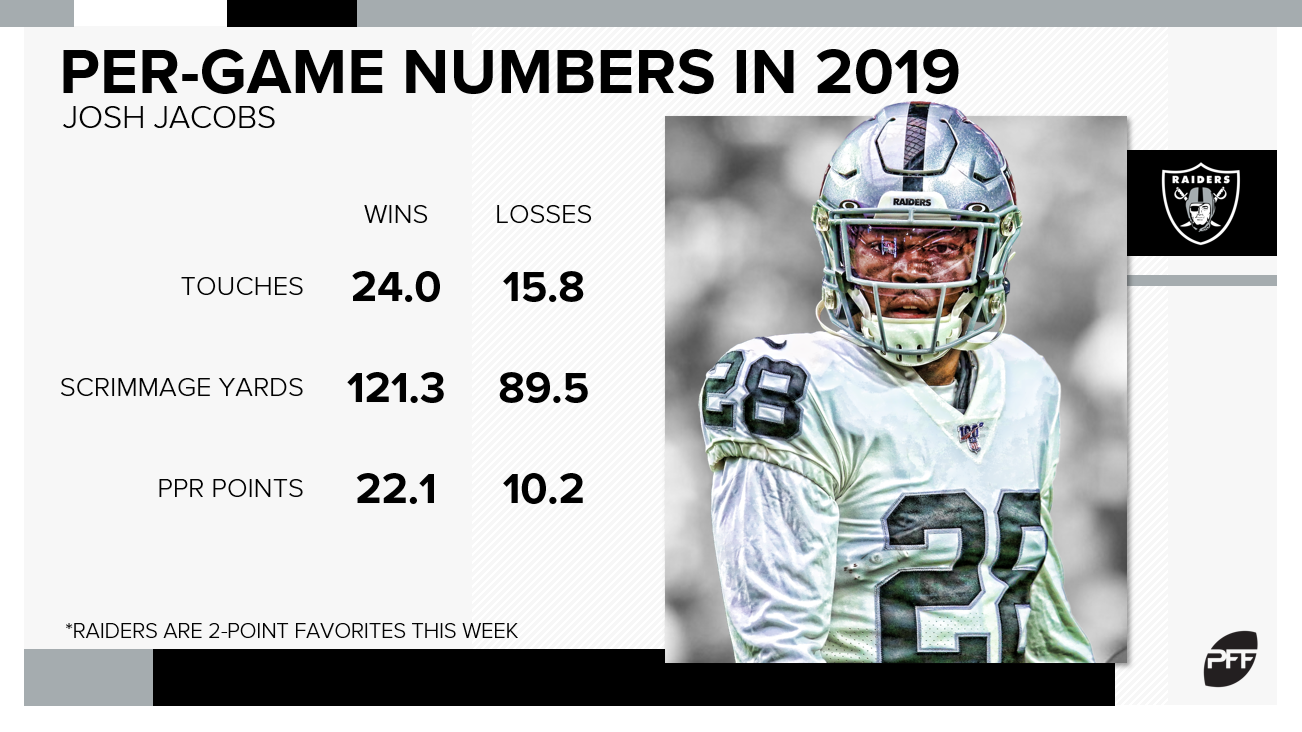 Williams ranks 17th in fantasy points per game (16.1), having managed to find the end zone in all five of these games. If top shadow cornerback Darius Slay sits out, Williams needs to be started as a high-end WR2. If Slay is active, Williams should still be started as a low-end WR2.

Since their Week 4 bye, the 49ers have held Jared Goff, Baker Mayfield, Kyle Allen, and Case Keenum to a combined 11.5 fantasy points. That's not a typo – 11.5 total fantasy points, combined. Murray should be avoided unless you're desperate or playing in a 2QB league.

The Montgomery blow-up game finally came, though later than most of us expected. In Week 8, he played 74% of the snaps, turning 31 touches into 24.7 fantasy points. While he did have a great Week 8 matchup, he now travels to Philadelphia as heavy underdogs. Philadelphia ranks third-best in yards allowed per carry, and, for the third year in a row, rank top-seven in rushing fantasy points per game allowed to opposing running backs.

Carolina’s James Bradberry ranks seventh-best of 68 qualifying cornerbacks in fantasy points allowed per route in coverage. He also ranks 22nd in PFF grade and has held DeAndre Hopkins and Mike Evans in check in shadow coverage in Weeks 2, 4, and 6. So, of course we’re fading Davis this week. After totaling just nine yards on six targets last week, in a dream matchup against the Buccaneers, it's possible Davis draws Bradberry in shadow coverage.

Since the ousting of Jay Gruden, Peterson has reached at least 75 rushing yards in three consecutive games, averaging 20.3 touches and 106.7 yards per game over this span. Gameflow likely won’t be in his favor this week, but that hasn’t mattered over the past two weeks, and now he gets a much softer run defense in the Bills. Buffalo ranks third-worst in schedule-adjusted fantasy points per game to opposing running backs, though his last two opponents both ranked top-six. With Chris Thompson questionable, Peterson should be viewed as a mid-range to low-end RB2 this week.

In Week 8, Walton ranked 12th among running backs in XFP (13.5), drawing 11 carries and six targets. Even more impressively, Walton led all Week 8 running backs in snap share, playing on 50 of 57 snaps (88%). As bad as Miami’s offense is, with this sort of workload (sans Kenyan Drake) up against a Jets defense that is giving up the sixth-most fantasy points per game to opposing running backs, Walton should be viewed as a high-end RB3 this week.

Over the last two weeks, with Delanie Walker banged up, Smith has turned 10 targets into nine receptions, 142 yards, and a touchdown. If Walker sits again, he should be started as a low-end TE1 against the Panthers.

Over the last two weeks, Conley totals 15 targets, 186 yards, and 31.6 fantasy points. This week, with Dede Westbrook banged up and questionable, he draws a Houston defense that is giving up the fifth-most fantasy points per game to opposing left wide receivers, which is where he runs 52% of his routes. If looking for a bye-week fill-in or desperation-flex-play, you can do a lot worse than Conley.