Metrics that Matter: How best to deploy your running QB

Seattle, WA, USA; Seattle Seahawks quarterback Russell Wilson (3) leaps over tight end Luke Willson (82) to pick up a first down during the second half during a game against the Arizona Cardinals at CenturyLink Field. The Cardinals won 26-24. Mandatory Credit: Troy Wayrynen-USA TODAY Sports

Last offseason, I took a look at which quarterbacks were most effective versus man or zone coverage. In the process, I noticed one surprising trend that I, regretfully, wish I had spent more time with.

We noted that defenses frequently adjusted their typical defensive scheme for more mobile quarterbacks like Tyrod Taylor, Marcus Mariota, and Russell Wilson. Against these quarterbacks, defenses shifted scheme, running zone coverage at a much higher rate than their typical average. 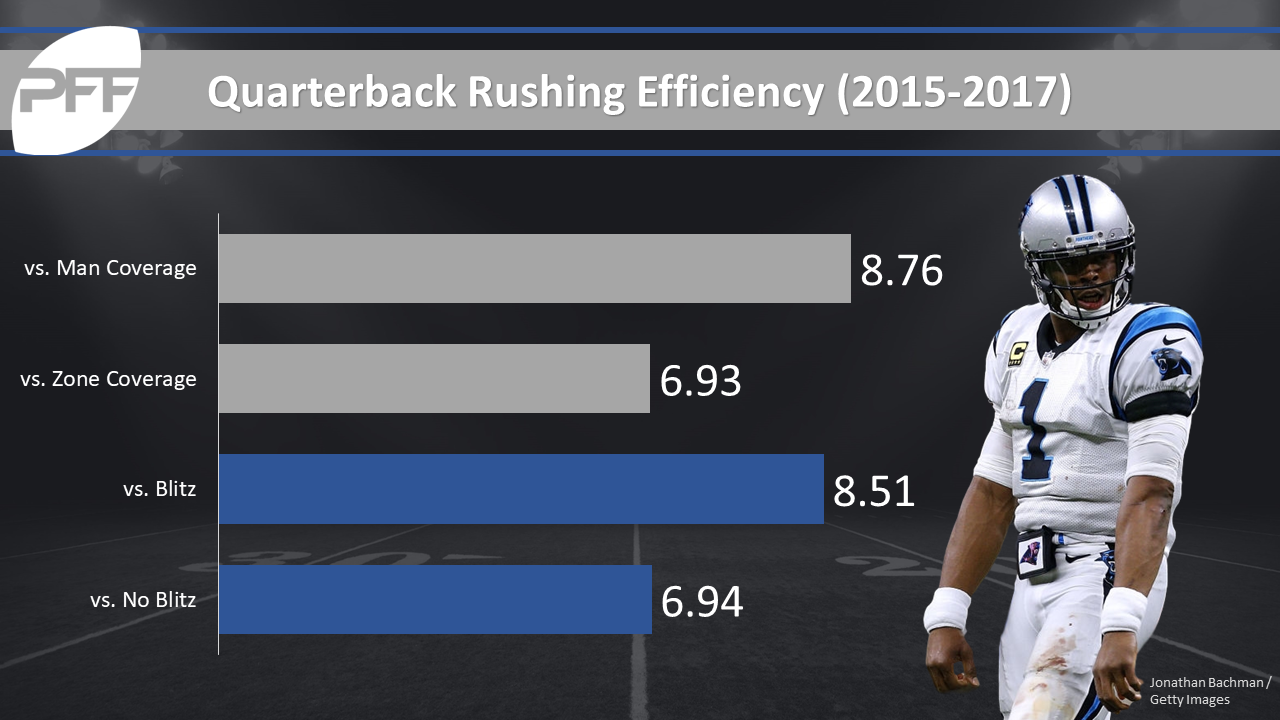 Upon further reflection, I think this makes sense intuitively. When defenses are in man coverage, their defensive backs will have their backs turned to a quarterback, making it easier for them to escape the pocket and rack up chunk yardage on the ground. Therefore, it makes more sense for an opposing defense to run zone coverage at a higher rate against them.

Patriots head coach and near-omnipotent football mind Bill Belichick has also echoed this sentiment. In a 2014 press conference, he stated, “If you're in zone coverage, then you have vision on the quarterback. So, there are advantages to being in zone coverage against a mobile quarterback in terms of vision.”

Furthermore, defenses tend to blitz at a much higher rate in man coverage than in zone coverage. Over the past three seasons, defenses blitzed quarterbacks on 47.9 percent of their dropbacks in man coverage, but that number shrunk to only 20.1 percent in zone coverage. Of course, there are some advantages to blitzing a mobile quarterback, but intuitively, if a mobile quarterback were able to elude a blitzing pass rush there should be more room to run (fewer defenders at the second level) once that quarterback broke the pocket and crossed the line of scrimmage. Indeed, the data back this up, as over the same stretch, quarterbacks averaged 8.51 yards per carry against a blitz, but only 6.94 when there was no blitz.

What does this have to do with fantasy football?

My theory is this: We should be targeting mobile quarterbacks against the most man-heavy defenses in DFS.

(If unfamiliar with the importance of rushing production from a fantasy quarterback, I highly recommend reading this old but legendary article from Rich Hribar.)

From a real NFL perspective, this implies quarterbacks should run more often against man defenses than they currently are.

From a fantasy perspective, this boost in rushing efficiency still doesn’t paint a full picture, because as alluded to earlier, defenses adjust scheme depending on the mobility of the opposing passer and, perplexingly, rush rate is lower against man coverage.

Digging even deeper into the data, we find a disappointingly low correlation for rushing production against the most man-heavy defenses. Against the top-10 most man-heavy defenses (by each season) since 2015, quarterbacks improved by 0.35 yards per carry and added only 0.85 rushing yards per game. If we isolate for only the most mobile quarterbacks (quarterbacks averaging at least 4.5 rushing attempts per game in each season), we see an increase of only 1.08 rushing yards per game.

When looking at the top-10 most blitz-heavy defenses (rather than man-heavy), rushing yards per game increases by only 0.85, or 1.08 when isolating for mobile quarterbacks.

While it appears my original hypothesis proved false, and this data isn’t terribly relevant for fantasy, it does show real NFL teams aren’t maximizing a potential edge. Quarterbacks should attempt to run more frequently against blitz-heavy and man-heavy defenses. For fantasy, we can continue to safely ignore the rate of man or zone coverage by a defense against a mobile quarterback.

Notes: For this exercise, prevent defense, abnormal coverage types, and goal-line and red-zone coverages were stripped out of our data sample. Cover-0, Cover-1, and 2-Man defenses were labeled as man coverage. Cover-2, Cover-3, Cover-4, Cover-6, and 3-Seam defenses were labeled as zone coverage. Though, note, these are very broad buckets, and each time a quarterback faces one of these zone schemes, there can still be man coverage within that on a specific receiver. For a more in-depth explanation of each coverage type, I highly recommend reading the introduction to Eliot Crist’s article here.