Hello, and welcome to Week 9 of the Expected Fantasy Points Report. If you’re unfamiliar with expected fantasy points, you can read this in-depth explanation from the offseason. You can also read more about expected touchdowns.

Through eight weeks of action, here are the top-25 players in expected fantasy points per game: 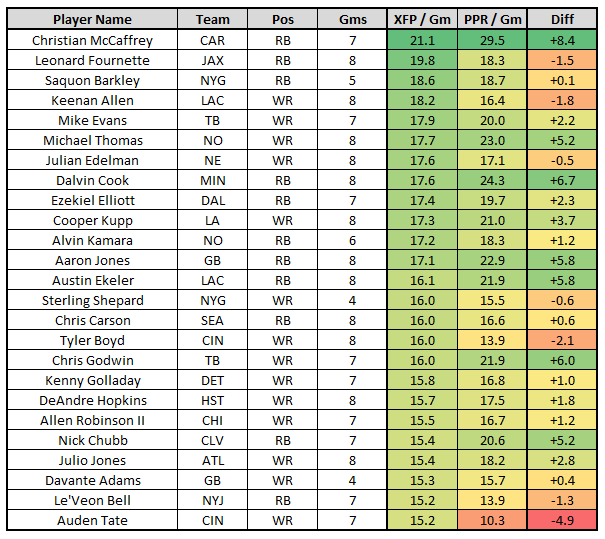 Among all running backs, Fournette ranks first in snaps, first in carries, fourth in targets, and first in XFP. He also ranks first in touches, third in yards from scrimmage, and 49th in touchdowns. Wait, what? That’s right, Fournette totals 1,054 yards from scrimmage but has found the end zone only once. Fournette has gotten extremely unlucky in the touchdown department, falling a league-high 4.5 touchdowns short of his expectation. And, I say “unlucky” rather than “inefficient,” because touchdown efficiency is more related to luck than skill. If all players were perfectly average in touchdown efficiency, Fournette would rank third among running backs in fantasy points per game (21.7), rather than his current ranking of ninth overall (18.3).