NASHVILLE, TN - NOVEMBER 05: Kevin Byard #31 of the Tennessee Titans runs with the ball after a interception against the Baltimore Ravens at Nissan Stadium on November 5, 2017 in Nashville, Tennessee. (Photo by Michael Reaves/Getty Images)

We’re now in Week 5 of the NFL season. To help prepare, here’s my weekly look at the top starts and sits for fantasy football players in IDP leagues.

Let’s take a moment to welcome J.J. Watt (looking healthy and two great games in a row) and Landon Collins (14 total tackles) back to fantasy relevance. Hopefully folks stayed the course as advised with these top-tier talents (or, in Collins’ case, my start advice for last week). Water always finds its level.

With four games (for most teams at least) of data under our belts, the matchups to exploit or avoid are becoming very clear. Let’s take a look at some of the top Week 5 IDP start/sit options, keeping in mind the Chicago Bears and Tampa Bay Buccaneers are on bye.

After sitting out Week 3 with a groin injury, McKinley returned last week with a vengeance. The second-year defensive end finished with three solo tackles and three sacks, posting top-five fantasy totals. McKinley has five sacks in three games played and gets to face a Steelers offense that has allowed seven sacks and three forced fumbles to defensive linemen in 2018. (For more on why we like McKinney this week check out Ross Miles’ Week 5 IDP waiver wire article from earlier in the week.)

The Lions offensive line had trouble last week protecting Matthew Stafford, allowing a season-high three sacks to the Cowboys. They will likely be without starting offensive guard T.J. Lang (concussion) and his teammate at guard Rick Wagner allowed a pair of quarterback hurries and a sack. Clark will flourish in Week 5 bringing interior pressure, as he had four hurries last week with a forced and recovered fumble.

The Vikings offensive line struggled mightily with the Rams’ pass rush last week, allowing 24 quarterback hurries, three hits, and four sacks. The interior trio of center Pat Elflein and guards Mike Remmers and Tom Compton allowed 16 hurries, two hits, and two sacks. Look for Cox — who was credited with five hurries last week — to have a big game and add to the 2.5 sacks he has through four games. 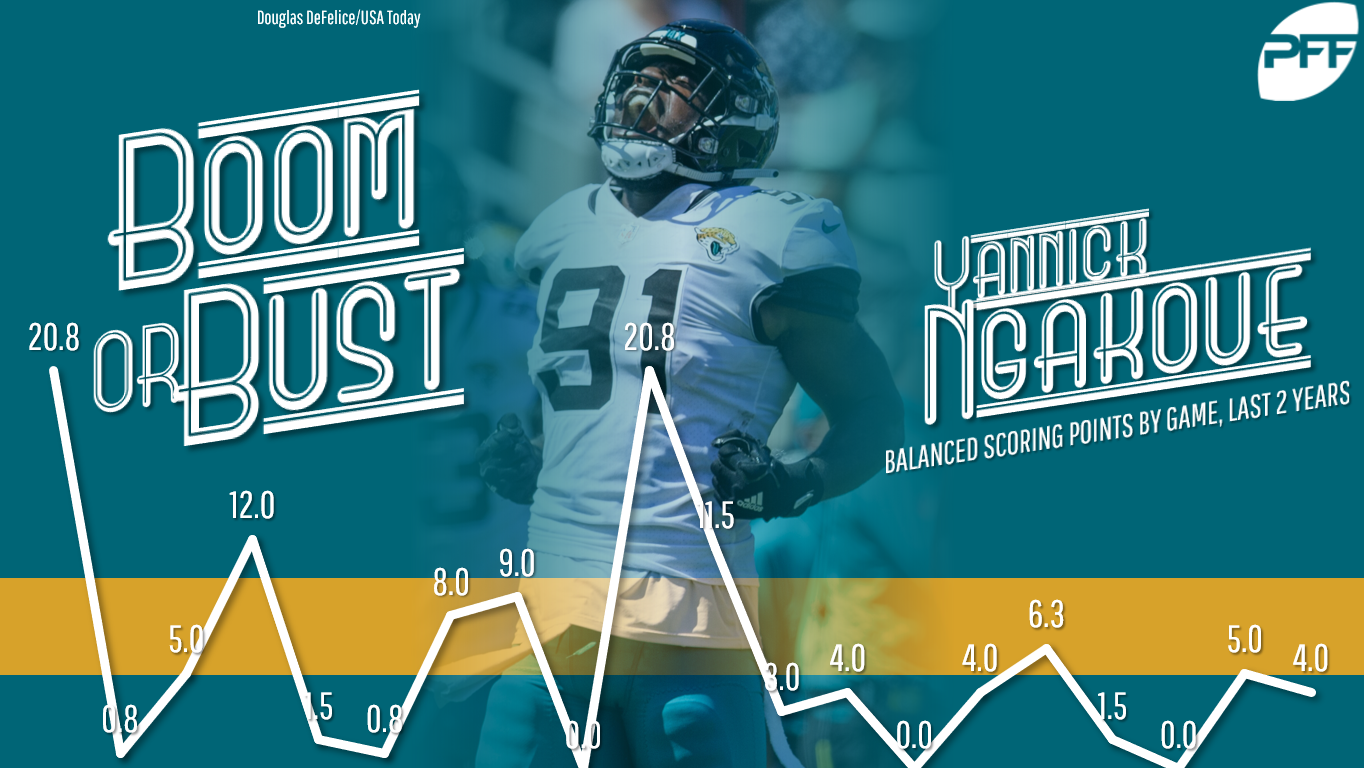 The 23-year-old defensive end is a boom-or-bust option who had enough boom weeks in 2017 to put up top-five fantasy production. To date in 2018, it’s been all bust for Ngakoue, as he has just four solo tackles and a single sack. This is not a match up to get back on track as Kansas City has allowed just two sacks to the defensive line and a single forced fumble through four games.

The brave IDP owners who held on to Williams were finally rewarded last week, as he put up five total tackles and a sack. That’s the good news. The bad news is that Williams has put up a pair of goose eggs in four games and has just 11 total tackles on the season. The Broncos have been stingy when it comes to handing out points to the defensive line, having given up three sacks and zero big plays in 2018. It’s time to move on from Williams altogether for fantasy purposes.

While teammate Darius Leonard sits atop the linebacker position from a fantasy perspective, Walker has quietly put up top-five numbers over the last three games. Leonard has posted 27 total tackles with a sack and forced fumble in that time. With Leonard dealing with an ankle issue on a short week, Walker will be the main linebacker for Indianapolis this week. Last week the Patriots allowed both Kiko Alonso and Jerome Baker to put up double-digit tackles.

Do not let the possible return of Mark Barron this week put the thought of sitting Littleton into the picture. A matchup against the Seahawks is fantasy gold for linebackers as they have allowed 97 total tackles, 8.5 sacks, and four forced and five recovered fumbles. Keep riding Littleton, who has posted nine or more total tackles in three of the first four weeks.

This is another player Ross Miles mentioned as a waiver option who I believe not only needs to be on IDP rosters but also in starting lineups in Week 5. Brown drew his first start of the season last week and finished with an impressive 10 total tackles and a sack. With Wesley Woodyard likely out this week there will be plenty of tackle opportunities for the third-year linebacker. There will also be plenty of big-play potential for Brown, as he was brought on the pass rush 14 times in Week 4.

I get that IDP owners are anxious to get Burfict in their lineups as his four-game suspension is over. There are a couple reasons a wait-and-see approach is advised. The Dolphins are a bad matchup for linebackers over the first quarter of the season and Burfict has started slowly in his first game back from suspensions. In 2016 when Burfict hit the field he managed just three total tackles and in 2017 he had six with no big plays. Give it a week before rolling with Burfict.

Since a huge Week 1 when he posted double-digit tackles and an interception return for a touchdown, things have been going downhill for Jack. In fact, in the past two games Jack has just eight total tackles and hasn’t been credited with a big play. The Chiefs represent a negative matchup for linebackers, having allowed just a single big play though four games to the position.

The first few weeks of the season were underwhelming at best for Byard. Through the first three games he had only 11 solo tackles and a pass defended. The dislocated elbow suffered by Kenny Vaccaro last week seemed to turn the tide a bit for Byard as he finished with nine solo (11 total) tackles. The matchup with the Bills this week could turn the tide big-play-wise as they have allowed six interceptions, three forced fumbles, and a fumble recovery.

Much as the matchup with New Orleans last week reignited Landon Collins, who had 14 total tackles, Swearinger should bounce back in Week 5. In the past two weeks the Saints have allowed double-digit tackles to three separate defensive backs. This matchup is too sweet to pass on and Swearinger belongs in starting lineups.

On a Cardinals defense that employs safeties as linebackers often, Boston lined up in the box or along the defensive line 23 times, allowing him to put up 11 solo tackles. Look for another big week against a San Francisco offense that is among the most generous to the defensive back position in both tackles and big plays allowed.

Since posting an interception in Week 1, Simmons has been making his fantasy hay with tackle numbers. In the last three games Simmons has 22 (20 solo) total tackles but hasn’t registered a big play. The Jets have allowed the fewest tackles (72) to defensive backs and Simmons may simply not have the opportunity to have a productive Week 5. There are better options out there.

There has been a big dropoff in production for the 33-year-old Weddle; through four games he has 16 total tackles and has yet to put up a big play. On the flip side, fellow safety Tony Jefferson has 24 total tackles with an interception as well as a forced and recovered fumble. Through four games, Jefferson has lined up in the box or on the defensive line 84 times to just 50 for Weddle. Weddle can safely be benched moving forward.