Pro Football Focus is here to break down the most efficient fantasy football players leading into Week 6 of the 2018 NFL season. This article breaks down which running backs, wide receivers, and tight ends are the top sleepers and busts or have the best and worst matchups of the week

Winston, who was the No. 1 overall fantasy quarterback over the final five games of last season, makes his first start of the 2018 season against the Falcons, who have given up the fourth-most fantasy points to enemy quarterbacks this year. The game has a high over/under (57.5), and Winston can safely be considered a top-10 option in his first game back. 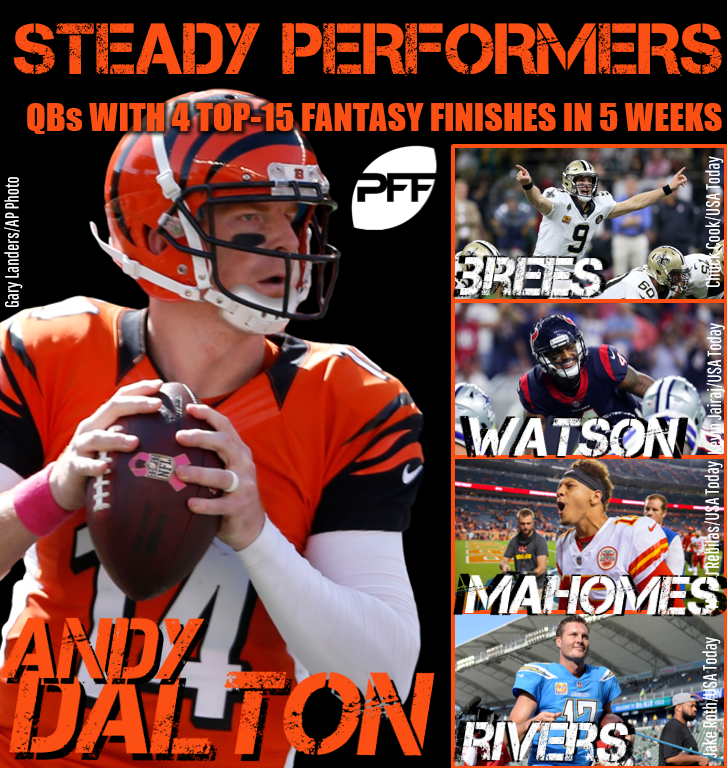 Dalton’s overall finishes this year: QB14, QB8, QB14, QB8, QB23. After his worst game of the season, look for Dalton to put up top-15 numbers again in Week 6 against divisional rival Pittsburgh, who have given up the second-most fantasy points to opposing quarterbacks and the most passing touchdowns (13) through five games. The Steelers have also given up over 300 passing yards in four straight games.

Michel may no longer be flying under the radar, but he’s poised to put up RB1-like numbers in Week 6 against the Chiefs, who have been pounded by running backs this year. Kansas City has given up 5.5 YPC against while being gashed for 188 yards from scrimmage per game by opposing backs.

Clement got a “100% all clear” from head coach Doug Pederson on Wednesday, and while some may be hesitant to lock Clement into lineups because of Wendell Smallwood’s presence, we like clement to put up RB2-like numbers against the Giants, who have given up the seventh-most fantasy points to opposing running backs on the year.

Julio Jones … a sleeper? Okay, yeah, you were already starting him, but people do seem to be generally down on him. It sometimes seems like the Falcons are even sleeping on him. But with one of the best individual WR/CB matchups of the week against rookie Carlton Davis and the barely-there Buccaneers defense, this is a Julio blowup spot. Overall, the Buccaneers have given up the most fantasy points per target to opposing wideouts this year.

With T.Y. Hilton likely to miss again, Rogers — who has one of the better individual WR/CB matchups of the week — should again be in for a sizable workload. In Week 4, he posted a line of 8-85-0 (11 targets), and last week, he went for 8-66-0 (11). Double-digit target volume seems like a very real possibility for Rogers as the primary wideout in this pass-happy offense.

If O.J. Howard misses Week 6, it’s hard not to eye Brate as a potential starter for your fantasy squad, as we have him projected for the sixth-most fantasy points among tight ends this week against the Falcons in what should be one of the week’s highest-scoring games.

Hooper has always been more of a touchdown-or-bust kind of player, but last week, he proved he’s capable of serving as a stat-padder as well, totaling nine catches for 77 yards on an impressive 11 targets. His Week 6 opponent, the Buccaneers, have given up the most fantasy points per game to opposing tight ends. He’s a viable streamer once again in Week 6.

Mariota flashed his ceiling in Week 4 (QB6 finish), but he’s also given us his floor twice in four games (QB32 in Week 1 and QB31 in Week 5). Mariota will flirt with his floor once again in Week 6 against the Ravens, who have given up the third-fewest fantasy points to opposing quarterbacks on the year.

The Titans have been stingy against opposing running backs, giving up the second-fewest fantasy points per touch to the position (0.60) so far this year. Collins (3 carries, 0 touchdowns) also trails Javorius Allen (4 carries, 3 touchdowns) once Baltimore gets inside the 5, so don’t look for him to pick up the points with touchdowns.

The Chicago Bears have given up the fewest fantasy points to opposing running backs (205 yards on the ground with 0 touchdowns surrendered and just 89 receiving yards and one touchdown to opposing backs). It’s not just a volume thing, either: The Bears have also given up the fewest fantasy points per touch to opposing running backs. To make matters worse for Drake (24 touches over the past three games), he’s still splitting work with Frank Gore (31 touches).

While we aren’t expecting a shadow situation, Diggs will see more of Patrick Peterson than any other Vikings receiver in Week 6, and Peterson is still performing as one of the best corners in the league; his 82.4 PFF grade through five weeks ranks fourth-best among this week’s starting corners. He’s also giving up just 0.16 fantasy points per route covered, fifth-fewest in the league.

Look for Watkins to draw shadow coverage from Stephon Gilmore. With Tyreek Hill, Travis Kelce, Kareem Hunt, and even Patrick Mahomes himself, the Chiefs have so many other avenues through which to move the ball that you can’t expect them to force it to Watkins with Gilmore in coverage. This is a clear matchup downgrade.

A buzzy name in recent weeks, Njoku collected season-highs across the board last week with targets (9), receptions (6), and yards (69), although he’s still looking for his first score. He’ll come crashing down in Week 6 against the Chargers, who have given up the fourth-fewest fantasy points per target to opposing tight ends on the year. 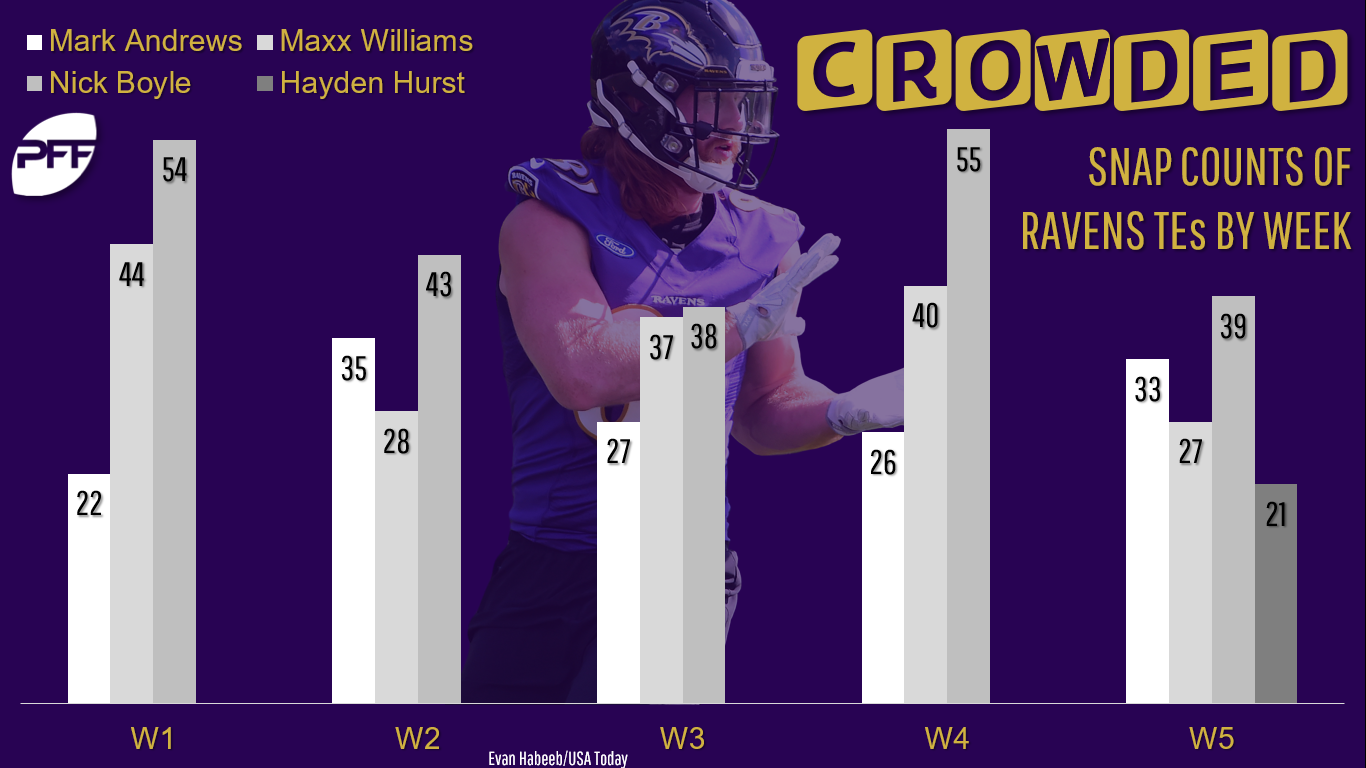 The Titans, Hurst’s Week 3 opponent, have given up the third-fewest fantasy points per target to opposing tight ends this year, and Hurst is stuck in the world’s largest tight-end-by-committee. Hurst rank 13-of-63 pass snaps last week, and while that number is sure to climb, he’ll still battle for snaps with Mark Andrews, Nick Boyle, and Maxx Williams — all of whom out-snapped him last week. Hurst should eventually break away from this group (although Andrews has flashed), but it’s not going to happen this week.