Touchdowns are one of the biggest drivers of fantasy success every year, but historically we have not been very good at predicting them at a player-level. This is especially true on a week-to-week basis. However, after doing some research and testing against prior knowledge, there is some actionable information we can infer.

For this research, I utilized NFLfastR, an R package that pulls NFL play-by-play data and uses powerful statistical models to build a litany of useful variables. One of the variables is series touchdown likelihood — i.e., how likely a team is to score a touchdown on a given drive. This likelihood is used to help build the well-known expected points model that so many, PFF included, are using in their analysis. For this article, though, we only care about the touchdowns, because that’s the bread and butter behind the highest-scoring fantasy seasons.

Before we get into all that, let’s revisit one of the most important tenets of fantasy football: Volume is king. The simplest heuristic for finding players who score a lot is to chase players who are projected to touch the ball often. This is part of the reason why upper-echelon running backs typically score more touchdowns than their wide receiver counterparts. This is, of course, not considering the value of receptions and receiving yards compared against rushing yards. For this analysis, we will disregard that.

We're going to use the series touchdown probability to scale how valuable a rush attempt or target was. For instance, getting three targets from your own 20-yard line deserves some credit, but not nearly as much as two targets in the red zone. We call this the Target Value Per Game — we’ll refer to this as TVPG from here on out. With that in mind, let’s look at the wide receivers. 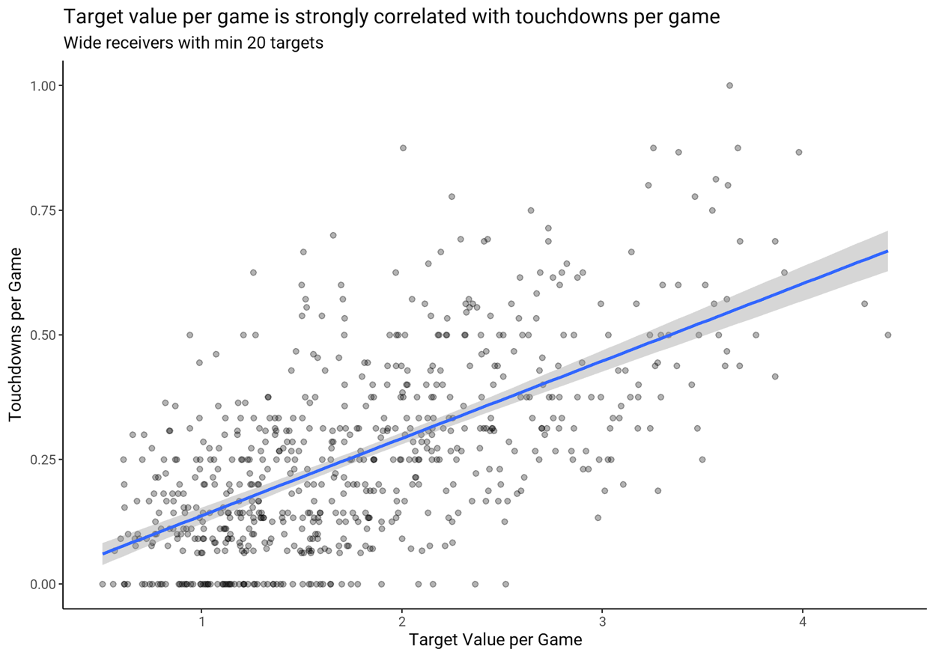 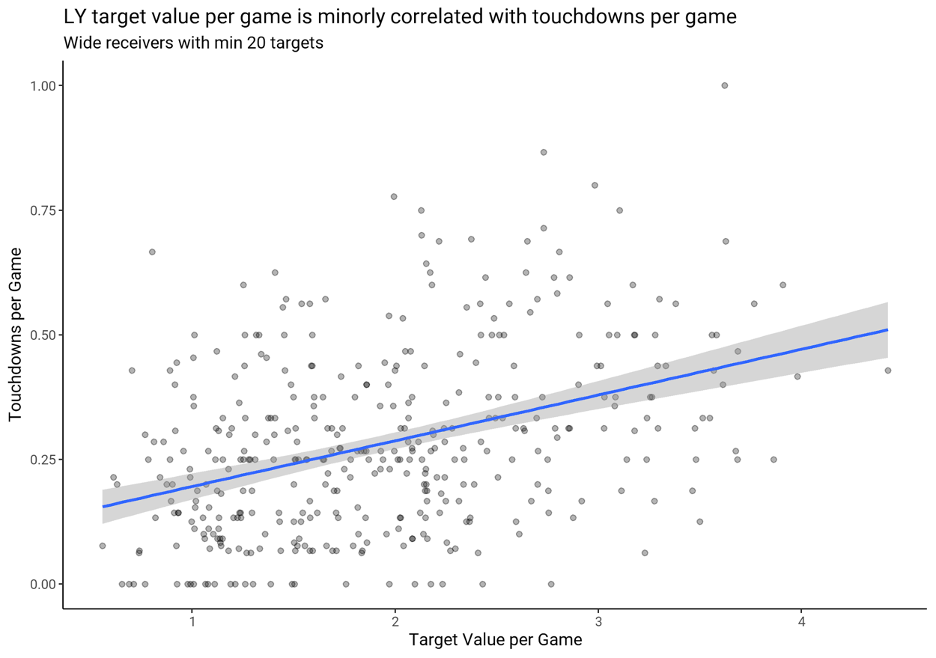 Here we get some signal, with an R2 of 0.152, but again we find improvement over using prior year’s targets instead, which yields an R2 of 0.145. When it comes to player-level year-over-year stability, this metric also beats out targets per game when predicting both current year’s touchdowns per game as well.

Now let’s take a look at the running backs. Since they get both rushing attempts and targets, we will instead refer to their metric as Opportunity Value Per Game, or OVPG. 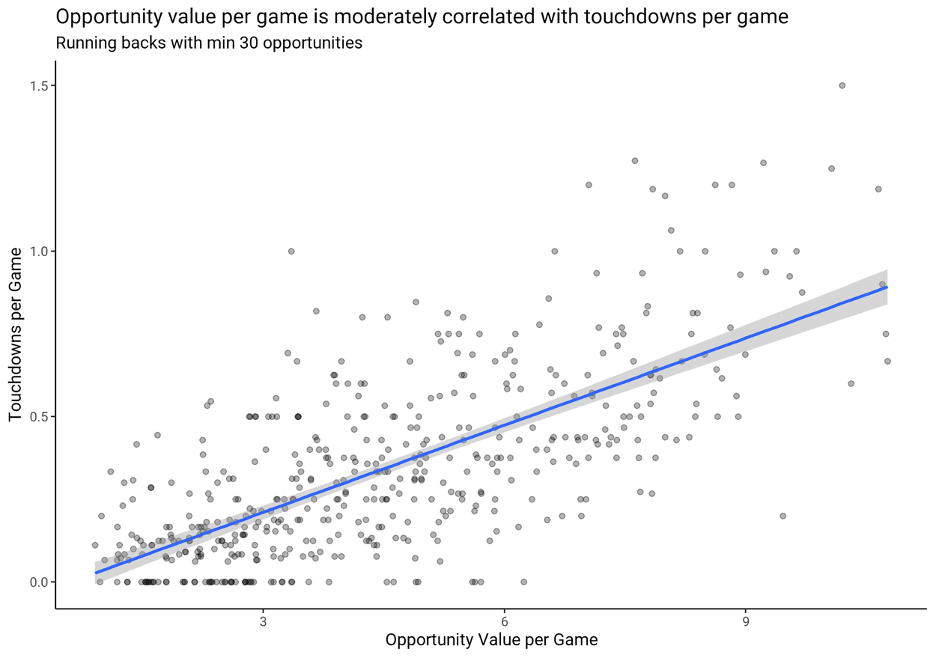 If you recall our wide receiver graph, the running backs actually bear a slightly stronger relationship, with an R2 of 0.49 — that's because they typically have higher volume compared to the receivers. Similarly, using just opportunities per game offers us an R2 of just 0.45 when correlated with touchdowns per game.

In terms of signal, OVPG from the prior year regressed on the current year’s touchdowns per game comes in at 0.147, compared to 0.139 when using last year’s opportunities per game. So we see some improvement.

Again, looking at year-over-year stability, our metric has thwarted regular ole opportunities per game, though the numbers are a little shakier than the wide receivers. This should come at no shock, as running backs are prone to a higher turnover rate. 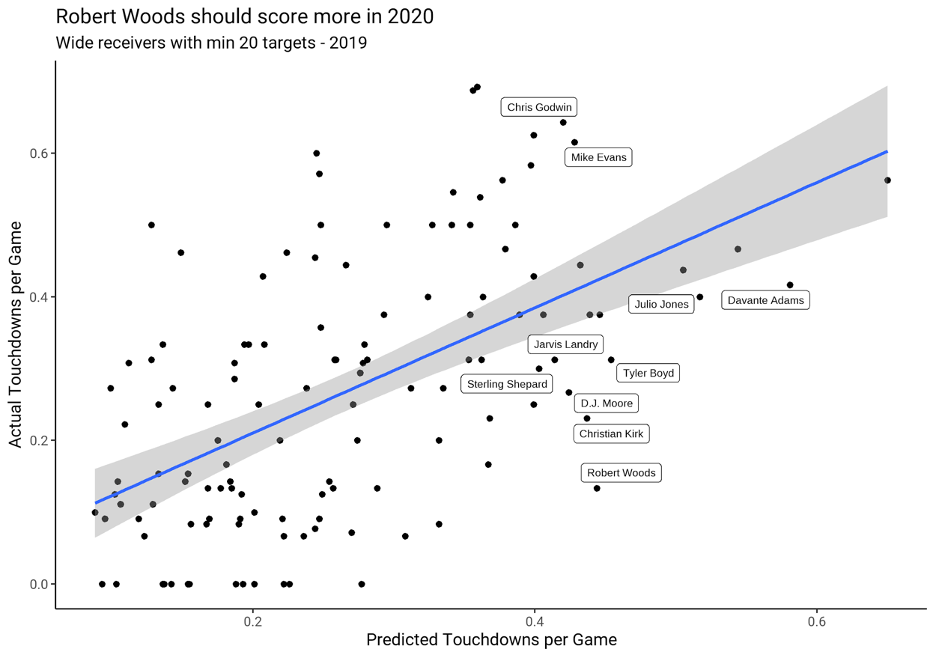 The main wide receivers I'm drafting from this list are:

In 2019, Woods led the Rams receivers with 139 targets and 2.98 TVPG, but he still fell eight touchdowns short of teammate Cooper Kupp, who ended the season with 10 scores despite having a lower TVPG (2.69) than Woods. However, Kupp was used more in the red zone, out-targeting Woods 18 to nine. Woods’ volume should pay off with more paydirt splashes in 2020.

One of “my guys“ for the 2020 season, I love everything about Boyd’s situation. He held the sixth-highest TVPG (3.04) in 2019 and looks to improve with Joe Burrow slinging the pigskin in Cincy this year. Boyd’s seventh-round ADP is way too low, and he should be drafted there every chance you get.

With DeAndre Hopkins coming to town, Kirk might have had his hopes dampened a bit from last season. The Cardinals experienced some growing pains with rookie quarterback Kyler Murray and a new Kliff Kingsbury system in place. I still think Kirk has a place as a red zone target — he saw 12 red zone targets last year but scored just three times. Luckily, he’s been dropping down to near double-digit rounds, so the cost won’t sting much.

Crazy how Julio can be considered underrated, but here we are. Those who follow Josh Hermsmeyer on twitter are familiar with the #NeverJulio tongue-in-cheek gag (sorry if I wasn’t supposed to mention that, Josh!), but he’s being drafted in the middle of the second round right now. Julio is as dominant as ever and carries the fourth-best YVPG into his 10th NFL season. Oh, did I mention he’s had six-straight seasons of 1,394 or more receiving yards? Pair him with Josh Jacobs and take that to the bank. 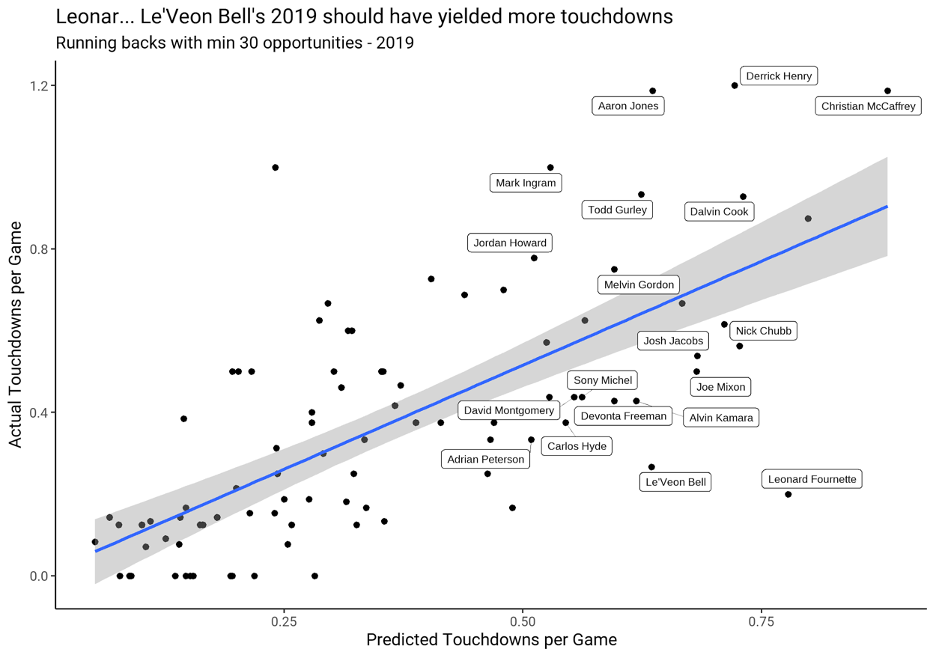 From the running back side of things, a few more names stick out:

The Jets will be an interesting team to watch this season from a fantasy perspective, but I think the two main fantasy assets in redraft are Bell and Jamison Crowder. Both of these players will be pumped full of targets by necessity. Recent news reports say rookie Denzel Mims, Breshad Perriman and tight end Chris Herndon are all dealing with injuries right now. Bell had a higher OVPG than Alvin Kamara and Todd Gurley last year but is currently being drafted behind them.

Since Derrius Guice was released, many have flocked to shiny new rookie Antonio Gibson to return value in the WFT backfield. However, I still think Peterson will be a better at-cost option, especially in the 10th round compared to Gibson’s climbing ADP. If Dwayne Haskins can take a step forward, this offense could have more opportunity available than most would like to admit. Last year, Peterson boasted 23 red zone rush attempts and two targets.

As always, with Michel it’s a question of health. He started on the reserve/PUP list this offseason but has since returned to action. Largely a letdown from his draft stock, Sony has actually decently strong rushing workloads the last two years. He’s also scored 13 touchdowns in his first two seasons. The biggest barrier will be fending off Damien Harris, who had a lackluster Year 1 in the NFL, but had an incredible college career with Alabama.

Off the top of my head, I can’t think of any later running backs I would be comfortable starting as my RB2 this season. Right now, he’s in the early-seventh round pick — I wouldn’t reach to get him, but I'm OK with that price. Not known as a pass-catcher, Howard has been reliable on the ground. He also has a nose for the end zone, scoring 32 total touchdowns across his first four seasons in the league.

Another running back who switched teams this offseason, Gordon derived his value from volume with the Chargers. Now with the Broncos, his role is less clear with Philip Lindsay in the mix and maybe some Royce Freeman, too. In addition to volume, Gordon has scored 47 total touchdowns since joining the league. There should be no issue with getting him red zone opportunities in this fun offense led by Drew Lock.

A sneaky guy to grab at the end of your drafts, Hyde has shown that he is fine being a journeyman running back. Last year, he was in the top third for OVPG despite being traded just weeks before the season started after the Texans lost Lamar Miller. The Seahawks were seventh in the league for run play percentage (41.6%) last season. So while Chris Carson will pave the way, Hyde will be their No. 2 while Rashad Penny deals with his perpetual injuries.