After detailing the league’s best wide receivers — and league’s worst defenses — from a fantasy-points-per-route-run perspective, it’s time to shift gears and look at which running backs thrive in fantasy on a per-route basis.

From a fantasy perspective, a pass-catching running back is just about as good as it gets — especially in PPR leagues. 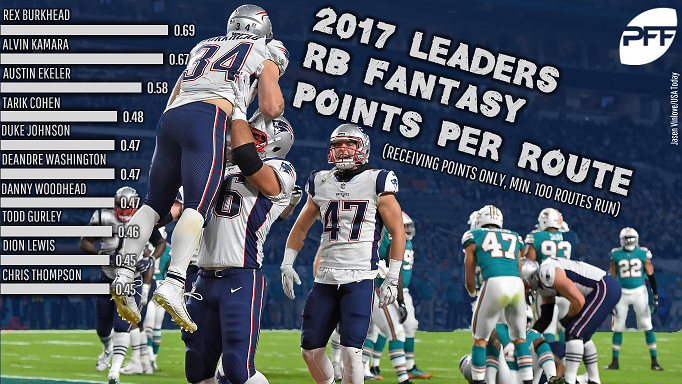 For what it’s worth, there is extremely high correlation between a player’s FP/RR in PPR leagues and standard leagues; it’s over 0.93 — with 1.00 symbolizing perfect correlation.

Seeing Rex Burkhead ahead of Kamara is a bit surprising, given how dominant Kamara was last year. Burkhead ran 107 pass routes, caught 30 passes, and scored 73.4 PPR points. Burkhead’s receptions-per-route rate of 28 percent ranked third in the entire NFL, behind only Kamara and Danny Woodhead. This serves as yet another reminder that Burkhead is in a great spot leading into 2018, as his role in New England’s offense is not expected to change.

Todd Gurley is the only true dual-threat running back to rank in the top 10 here, although I wouldn’t fuss too much if you made the case for Dion Lewis and Kamara.

The more impressive feat is that Gurley did this despite catching a pass on just 16 percent of his pass routes. Aside from Chris Thompson, every other player ranked in the top 10 here caught a pass on at least 22 percent of their routes. Gurley’s inclusion with this group of third-down backs can serve as evidence that he has truly “arrived” as a receiver and that we can expect more work for him in the passing game moving forward.

The Browns were disastrous against pass-catching backs last year, as they gave up 0.45 fantasy points per route run to the position. The league’s stingiest team against running backs coming out of the backfield was the Chiefs, who gave up just 0.21 FP/RR — less than half the amount as the Browns.

As if you needed more reason to like Freeman and Coleman, Atlanta’s duo has the third-softest schedule from a FP/RR perspective.

Freeman (41 targets) and Coleman (36 targets) are actually not high-volume receivers in their own rights, which can make it a little frustrating on a week-to-week basis. But in best-ball leagues, you don’t have to worry about who will hit big when — and based on their schedule, we can expect it to happen will somewhat regularity in 2018.

People are still high on Bell — he’s the No. 2 player coming off draft boards — but I have seen some say they are concerned about Bell’s pending holdout. Could it make him rusty leading into 2018? When you’re talking about the potential No. 1 overall pick in fantasy, all potential red flags are examined.

But if you’re looking for another reason to love Bell in 2018, this study should help. The Steelers have the fifth-easiest schedule from a FP/RR perspective in 2018. Bell ran 498 pass routes last year — most among all running backs. It was even more than Julio Jones (469).

Washington running backs have the sixth-softest schedule from a FP/RR perspective. The team already has one of the best pass-catching backs in the league on the roster in Thompson. He will presumably serve as the team’s third-down back again — and he ranked in the top 10 in terms of FP/RR — so we should continue to view Thompson as an elite receiving back, especially when factoring in his schedule.

Exactly how Guice, a rookie, will be used in the passing game remains to be seen, but we shouldn’t expect him to have too big of a role given his lack of experience as a pass-catcher in college (his 18 receptions ranked 69th in the nation last year) and the presence of Thompson. He will undoubtedly see at least some receiving work, though, so this can only be viewed as a positive.