We’re coming down the home stretch of the fantasy football draft season, so it’s time for another update to our overall PPR rankings for 2018. You can use these rankings to put the finishing touches on your draft board. Remember to also check out our tiers for quarterback, running back, wide receiver, and tight end.

1. Le'Veon Bell (RB1) – We’re splitting hairs between the top two options this year, but Bell is coming off a massive 400-touch season and should continue to see loads of volume. 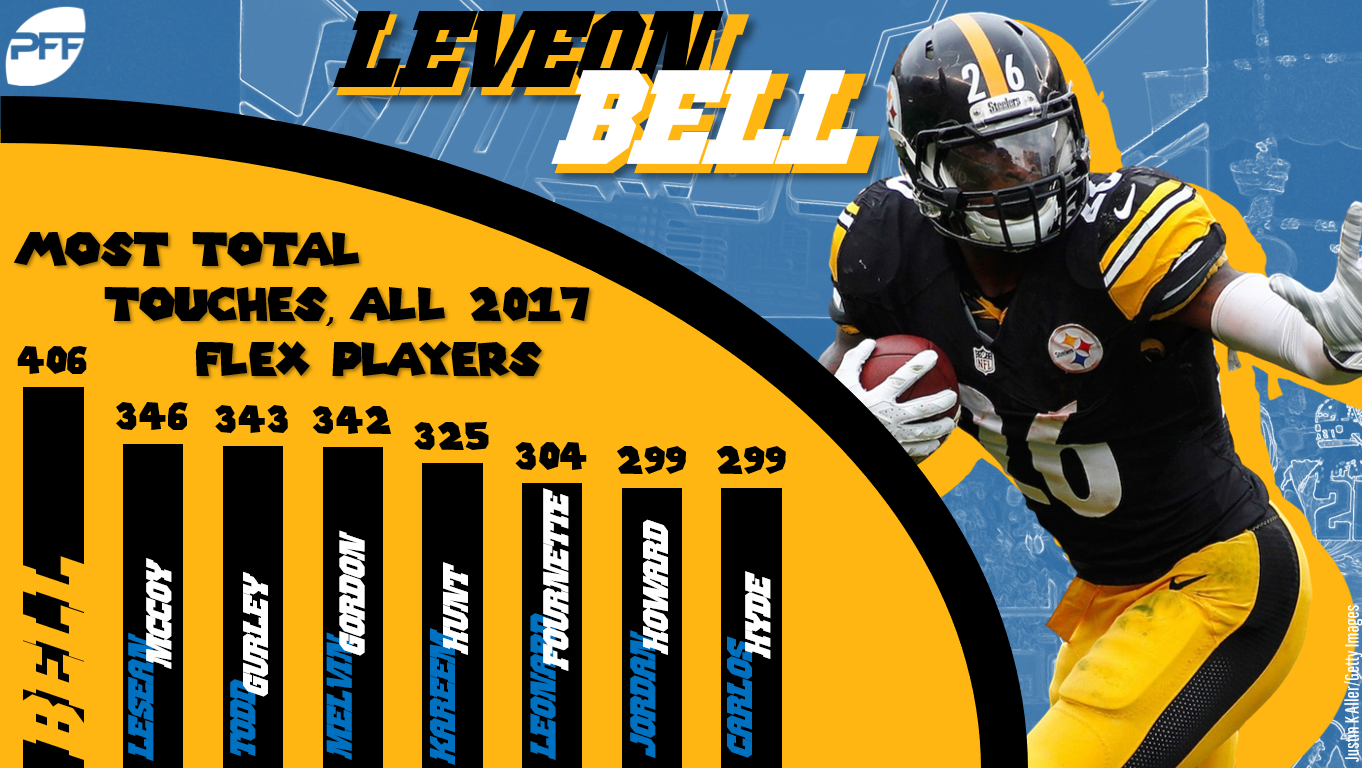 2. Todd Gurley (RB2) – Gurley rebounded in a big way, but don’t expect him to find the end zone 19 times again this season.

3. David Johnson (RB3) – Johnson returns from injury but should see plenty of work as the Cards’ primary offensive weapon this year.

4. Ezekiel Elliott (RB4) – This scoring format isn’t ideal for Elliott, but he’s still a strong option thanks to his heavy volume as a runner.

5. Antonio Brown (WR1) – He’s the greatest wideout of his generation and continues to pad his resume to be placed in the conversation of greatest of all time.

6. Alvin Kamara (RB5) – Mark Ingram’s suspension vaults Kamara up a few spots. Don’t expect him to last much further that the middle of the first round.

7. Saquon Barkley (RB6) – He nearly broke the Internet with his first preseason carry and is in a prime spot to produce with little competition for touches on the Giants’ depth chart.

8. DeAndre Hopkins (WR2) – With Deshaun Watson back under center, the sky is the limit for Hopkins’ fantasy value this year.

9. Melvin Gordon (RB7) – He isn’t the most efficient runner, but Gordon has almost no competition for touches in a strong offense.

10. Julio Jones (WR3) – Sure, the touchdown productivity isn’t where you want it to be, but Jones has been spectacularly efficient from a yardage standpoint over the last four seasons.

11. Odell Beckham Jr. (WR4) – He has arguably the highest ceiling of any wideout, but there are still some concerns about the overall state of the Giants’ offense following a down year for the team.

12. Kareem Hunt (RB8) – We may see a slight reduction in Hunt’s volume, but he remains a strong option in a very favorable offense.

13. Leonard Fournette (RB9) – Like Elliott, Fournette doesn’t benefit from PPR scoring as much as some of the other top running backs, but his volume as a runner places him on the fringe of Round 1.

14. Michael Thomas (WR5) – Thomas is coming off a 100-catch season and the scary thing is that there’s still room to grow.

15. Dalvin Cook (RB10) – Cook got off to a hot start before the injury last season. Expect him to pick right up where he left off.

17. Christian McCaffrey (RB11) – McCaffrey led all running backs in targets last season, and there’s a chance he sees an increased workload as a runner.

18. Devonta Freeman (RB12) – Freeman is still splitting touches with Tevin Coleman, but his use in the red zone keeps in in the RB1 conversation.

19. A.J. Green (WR7) – Thought he’s overshadowed by other names at the position, Green has been about as consistent as they come in his seven years in the league.

20. Rob Gronkowski (TE1) – When he’s on the field, Gronk is the most dominant player at his respective position in the league. 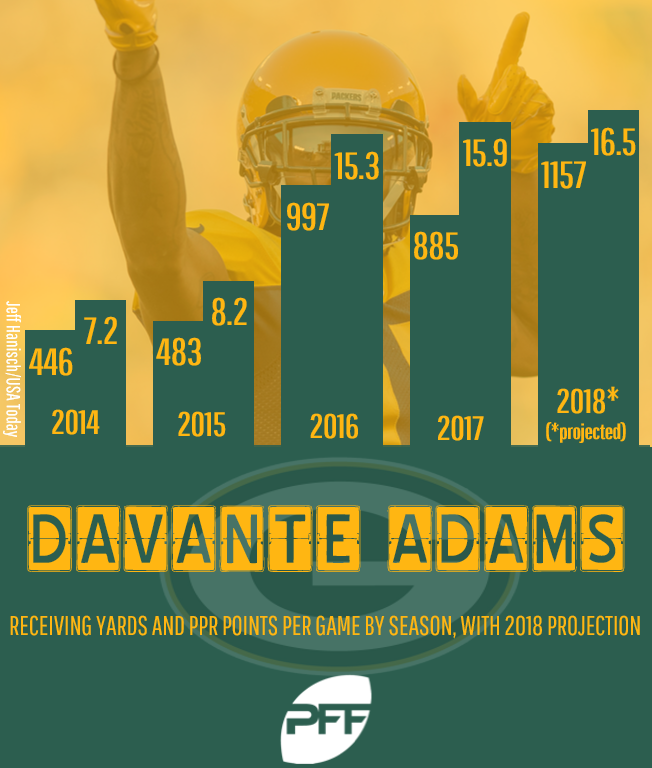 22. Travis Kelce (TE2) – Last year’s No. 1 fantasy tight end has arguably a higher ceiling in 2018 with Patrick Mahomes under center.

23. Mike Evans (WR9) – There’s no denying Evans’ upside, but his inconsistencies could push him back to the third round of drafts.

24. Jerick McKinnon (RB13) – He’s banged up in camp, but still is poised to touch the ball a ton in a favorable offense.

26. Zach Ertz (TE3) – Tight end is so thin this year that it makes sense to grab one of the big three before the end of the third round.

27. T.Y. Hilton (WR11) – With Andrew Luck on the field, Hilton has been a borderline elite WR1, and signs point to Luck being fully healthy to start the season.

28. Larry Fitzgerald (WR12) – He’s up there in age, but Fitzgerald has three straight 100-catch seasons.

29. Joe Mixon (RB14) – Mixon got off to a hot start in the preseason and poised for a breakout year with an upgraded offensive line in Cincinnati.

30. Doug Baldwin (WR13) – He’s banged up in training camp, but Baldwin should be ready to roll by the start of the season.

48. Josh Gordon (WR23) – We’re moving Gordon back up after the upside wide receiver reported to Browns camp. Keep in mind that he’s yet to be cleared to practice.

53. Royce Freeman (RB23) – The rookie running back has been impressive in the preseason and is a sneaky bet to break out this year.

61. Delanie Walker (TE5) – Sure, he only scored three touchdowns last year, but Walker has been extremely productive in his time with the Titans.

78. Marshawn Lynch (RB28) – The Raiders run game is a mess to decipher for fantasy purposes, so it’s best to not overvalue Lynch in drafts. 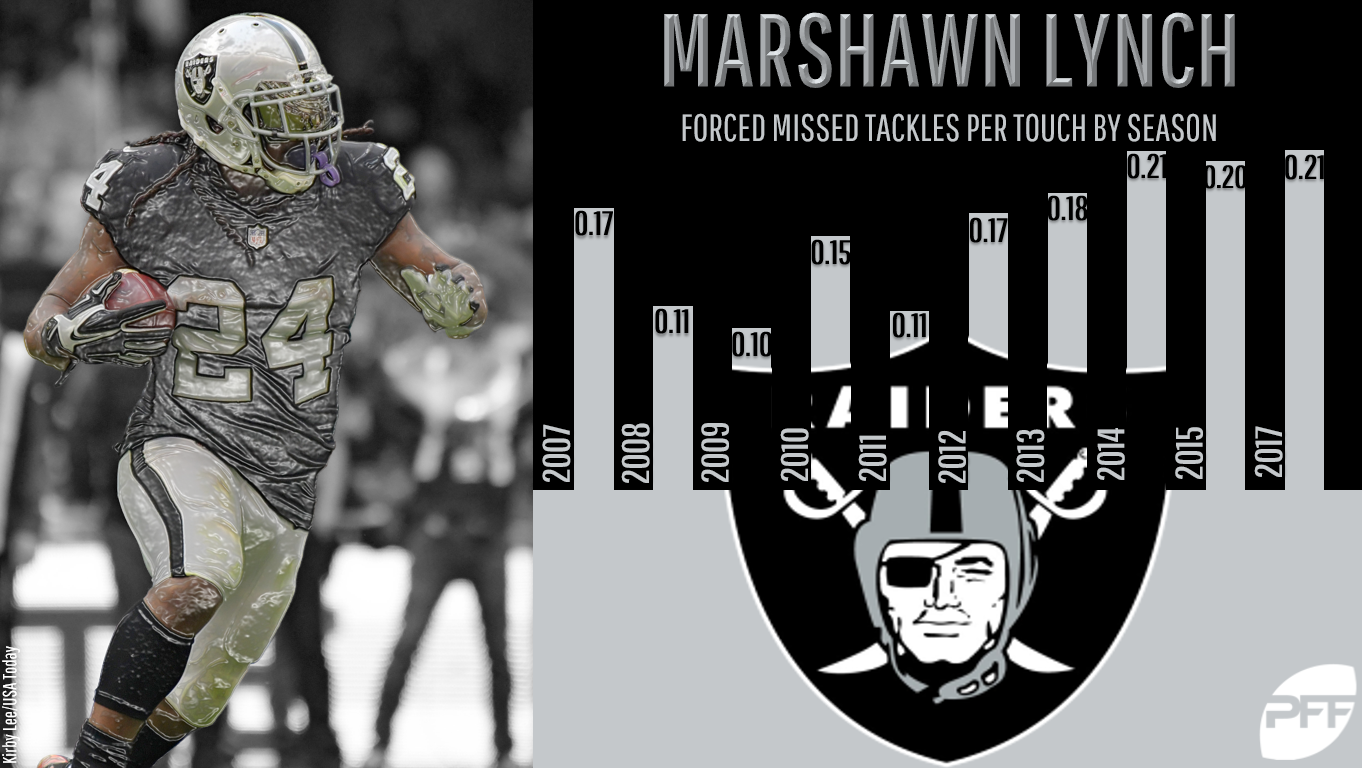 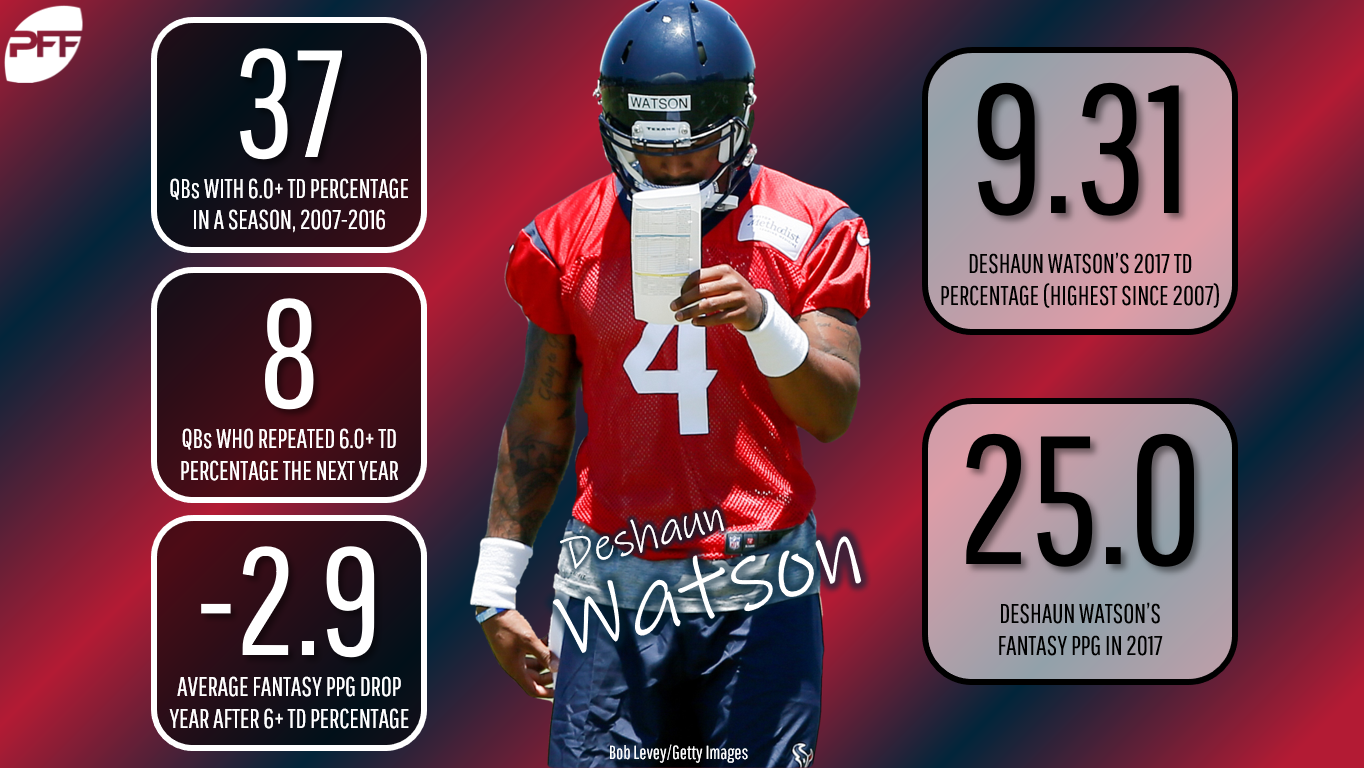 115. Patrick Mahomes (QB14) – He showed in the preseason that his arm is the real deal, but buyer beware that it could be a bumpy ride in Mahomes’ first season as a full-time starter.

126. Chris Carson (RB42) – Carson looks like he’ll be the early-season lead back in Seattle, but he’s a risky fantasy pick with Rashaad Penny in the mix.

133. Anthony Miller (WR56) – The exciting rookie is poised to have a big role in the Bears’ offense this season.

142. Ty Montgomery (RB44) – Green Bay will likely use all three of their backs this year, but Montgomery projects to be the primary pass-catcher. 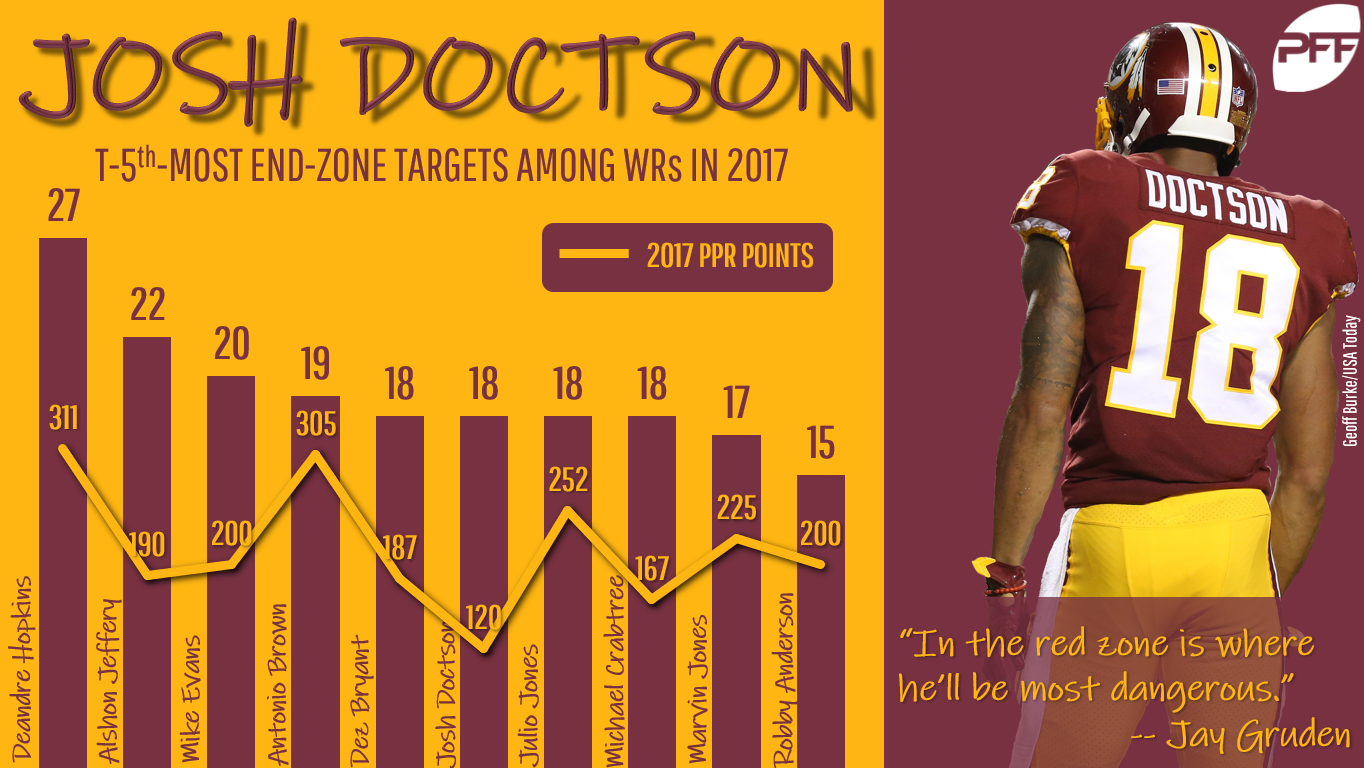 150. Adrian Peterson (RB45) – The veteran only barely makes the list after signing with the Redskins. Fantasy championships typically aren’t one on the backs of over-the-hill running backs.