Fantasy Football: Quantifying the biggest veteran winners and losers of the 2022 NFL Draft

We’ve had a week to digest the 2022 NFL Draft on a theoretical level, but I like to live in the cold, hard data. Luckily, there are best-ball fantasy drafts taking place throughout the offseason, and I’m combing through te data for insights from every pick in every draft at best-ball provider FFPC.

You might think you know who the biggest winners and losers were in the fantasy football world based on the effects of the draft, and I’m here to give you the verdicts from those currently betting some money on what will happen in the 2022 season. In this piece, I’m going to go through the veterans whose values were most affected by the NFL draft, with an article earlier this week on the biggest risers and fallers among rookies.

The method here is fairly simple: I calculated the pre- and post-draft average draft positions (ADPs) for every veteran based on their average ADP in the week leading up to the NFL draft and the week following the draft. Each player visualized below had substantial movement away from their pre-draft ADPs. The rush to react to the news can create pockets of value in either direction, and fantasy managers can exploit those pockets in upcoming dynasty drafts and in their own best-ball leagues. 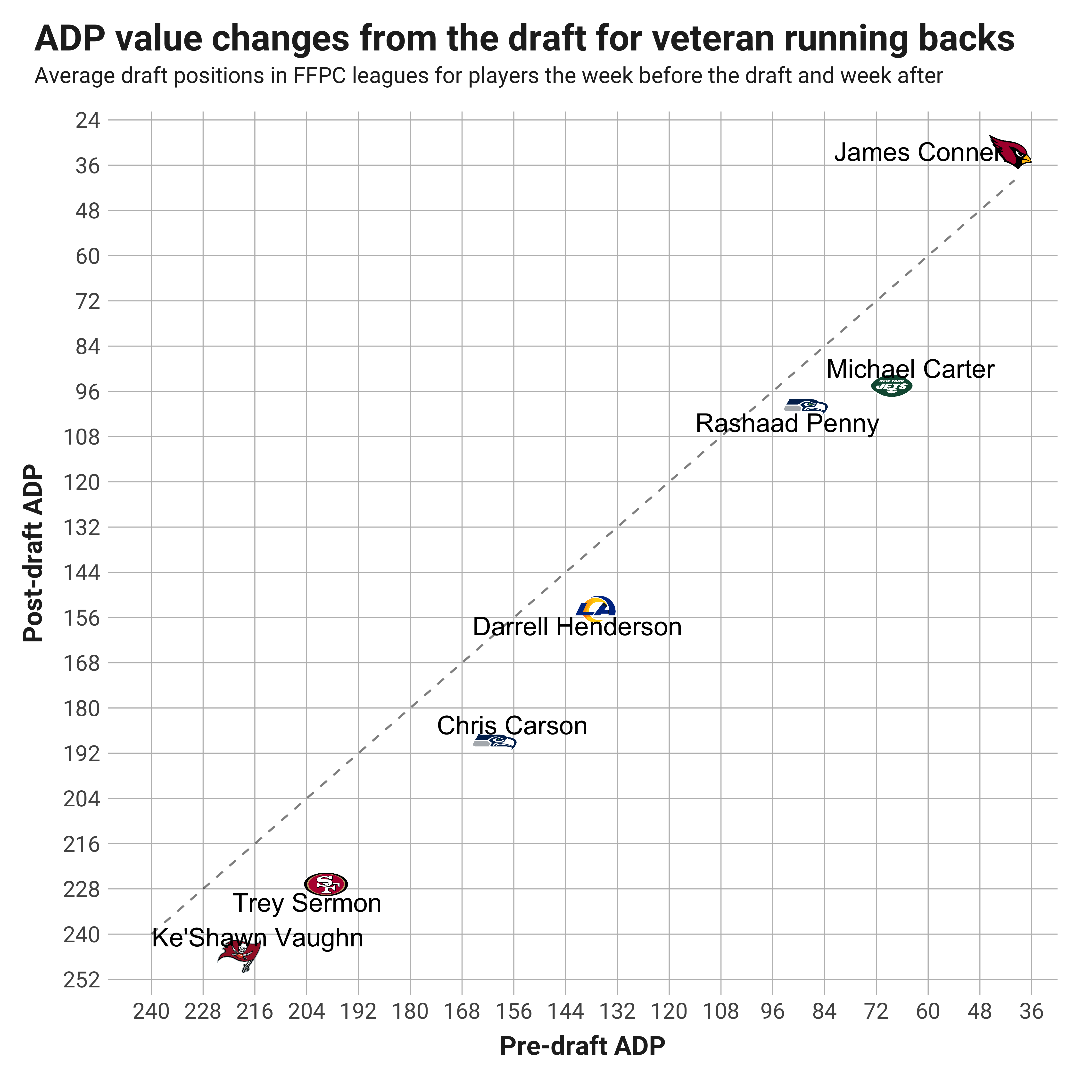 Veteran running backs with significant pre- and post-draft ADP movements are on the plot above — players further to the right have higher ADPs pre-draft, and those further up have risen post-draft. The simplest way to think about the graph's orientation is that any player above the dashed line has appreciated in value from the draft while those below have decreased in value. Each line on the plot represents the final selection in each round for a 12-person draft.

James Conner was the NFL draft's one big veteran winner among running backs. The Arizona Cardinals did select a running back in the draft, but they didn’t take Keaontay Ingram until the back half of the sixth round. Conner signed a three-year, $21 million dollar contract with the Cardinals this offseason, and he has the size and skill set to be a three-down back. Conner’s ADP rose roughly nine spots since the NFL draft, moving into the third round.

Michael Carter was the biggest loser in terms of how many spots his ADP has fallen since the NFL draft. After the New York Jets traded up to select Breece Hall at the beginning of the second round, Carter’s ADP fell almost 30 spots, moving him from the sixth round to the late-eighth round. Carter's path to fantasy relevance with the Hall addition seems slim, and I wouldn’t be surprised if he falls into the double-digit rounds by training camp.

Rashaad Penny and Chris Carson fell with the Kenneth Walker selection in the second round, as Penny fell a round to the ninth while Carson is straining to retain any fantasy relevance. Penny could still begin the season as the Seattle Seahawks’ starter after signing a one-year $5.75 million contract in the offseason, but the former first-round pick is likely playing his last season in Seattle.

Darrell Henderson, Trey Sermon and Ke’Shawn Vaughn‘s 2022 expectations all suffered from added backfield competition, but Henderson faces the least competition from a draft capital perspective. The Los Angeles Rams drafted Kyren Williams but not until the fifth round. Williams could take valuable receiving touches away from Henderson, but he doesn’t profile as someone who can fill the early-down role if Cam Akers is injured or benched during the season. 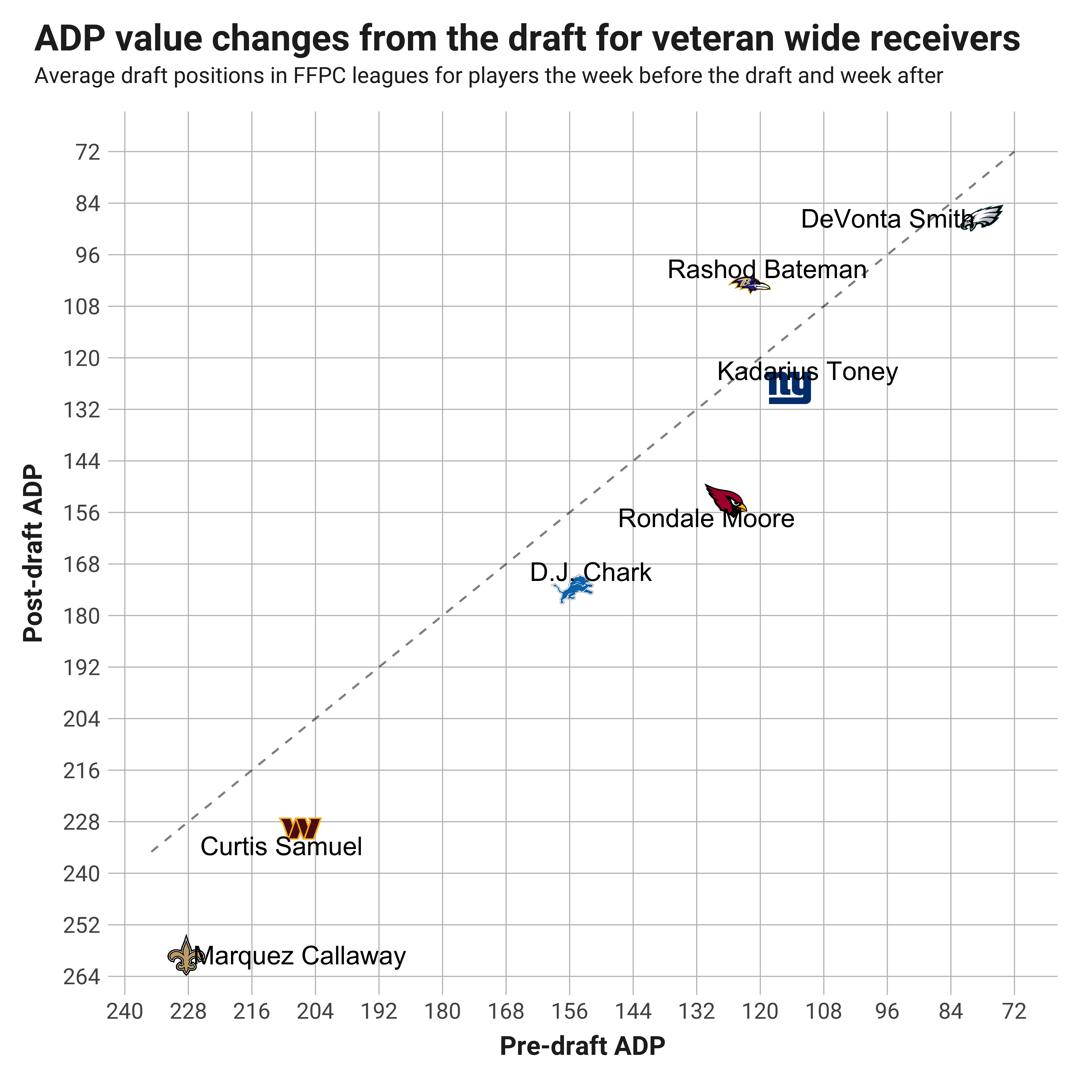 Like veteran running backs, the risk of the NFL draft is disproportionate to the downside for veteran wide receivers, as all but one of the biggest post-draft ADP movers in best-ball leagues are falling rather than rising.

Rashod Bateman was the one big winner, as he elevated to the assumed No. 1 WR for the Baltimore Ravens due to Marquise Brown‘s departure, and the Ravens taking zero wide receivers with their 11 draft picks. No other Ravens wide receiver has a meaningful ADP in best-ball leagues since the NFL draft, though tight end Mark Andrews does provide significant target competition. 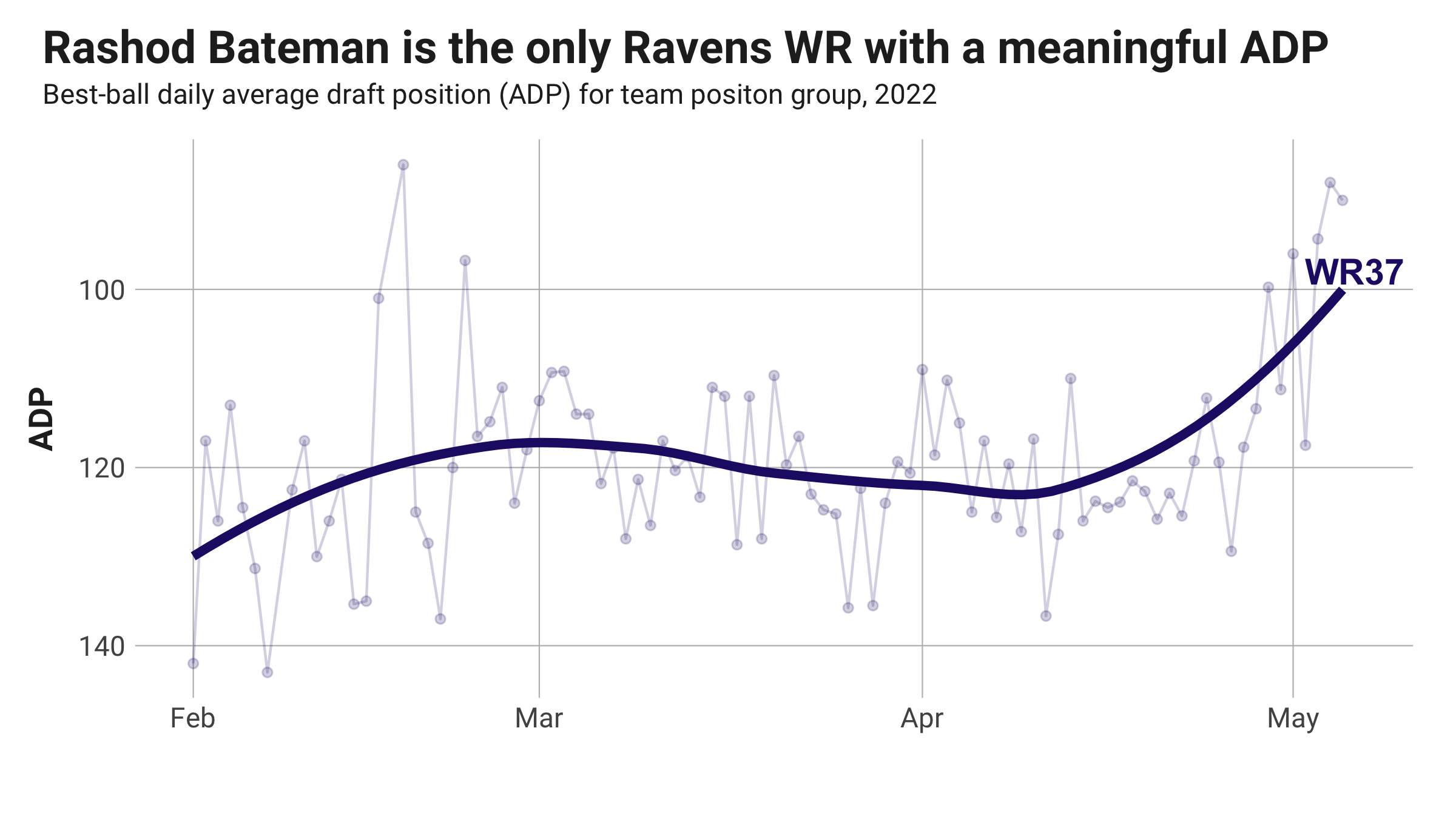 In terms of relative ADP decline, Rondale Moore was the biggest veteran loser of the NFL draft. While the Cardinals didn’t take a wide receiver in the actual draft, they did swap first- and third-round picks with the Ravens in return for Brown. Even if Brown doesn’t profile as the same type of receiver as Moore, it’s concerning that the Cardinal felt it was necessary to give up significant draft capital to acquire another receiver despite being only a year removed from drafting Moore in the second round of the 2021 draft. Moore was already a questionable breakout candidate, only accumulating 435 receiving yards as a rookie.

Kadarius Toney had an eventful offseason before we even got to May. First, he missed the beginning of voluntary workouts, then rumors were floated that he could be traded and finally, the New York Giants selected a similar player in the second round of the NFL draft. The promise of the talent Toney flashed during his rookie season hasn’t allowed his ADP to fall more than a round during the chaos.

There isn’t much mystery as to why D.J. Chark, Curtis Samuel and Marquez Callaway‘s ADPs fell following the draft. Their respective teams drafted wide receivers in the top half of the first round, and now they’ve fallen in best-ball drafts from their previous status as the presumptive WR2 for their teams.