• Chicago Bears RB Khalil Herbert played 100% of the team's offensive snaps with the starters before leaving when the starters were finished, indicating a potentially large role this season.

• The Seattle Seahawks used Noah Fant, Will Dissly and Colby Parkinson with the starters, making it unlikely any can be a starting tight end in fantasy football.

PFF's fantasy football recap focuses on player usage and stats, breaking down all the vital information you need to achieve fantasy success in 2022. This is only focused on the players who are relevant in fantasy football leagues. 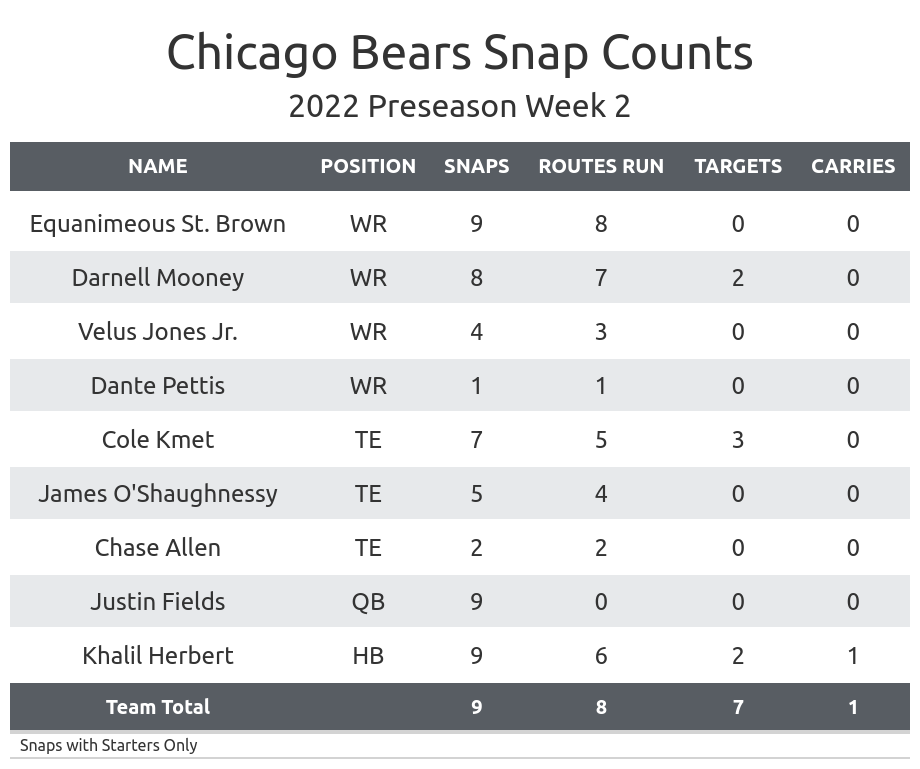 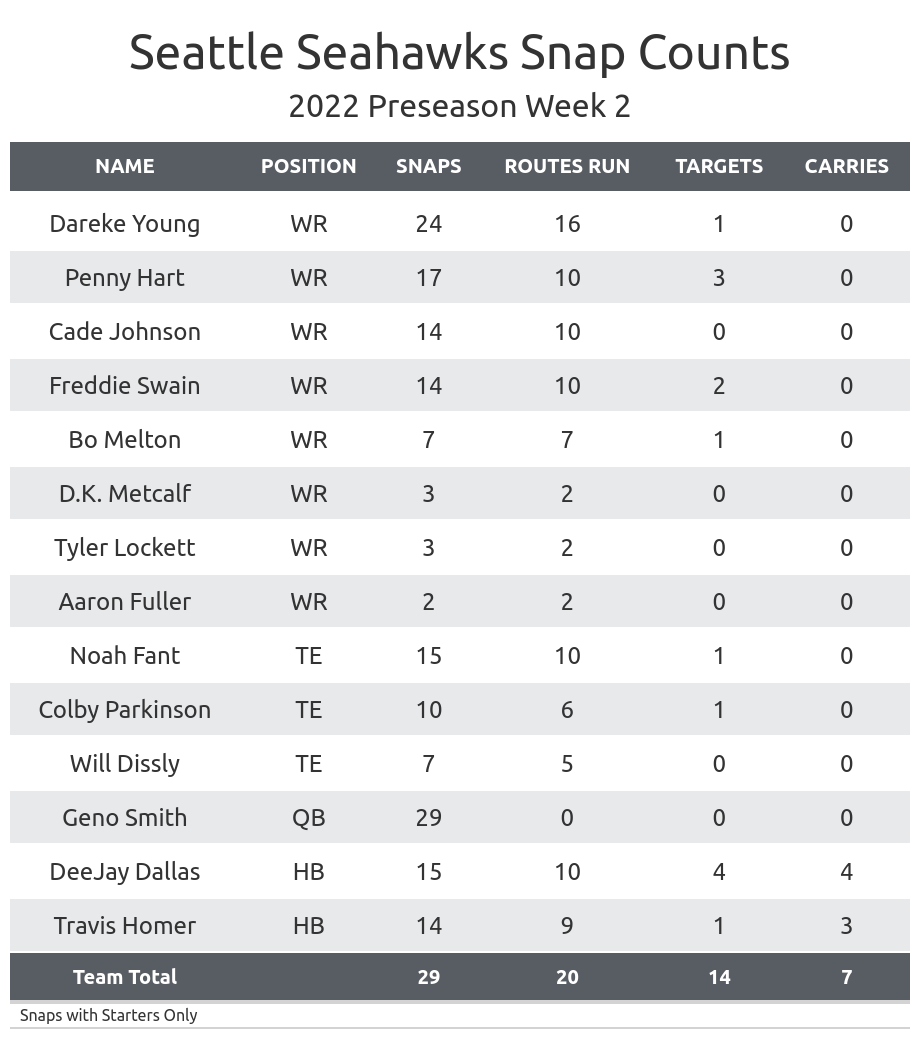 Draft Khalil Herbert: David Montgomery missed another preseason game with an undisclosed injury, allowing Herbert to play 100% of the snaps with the starters for a second straight week. He again left the game once the starters were finished. It was good to see Chicago get him involved as a receiver (two receptions) and pass protector. Receiving and blocking aren’t his strengths, but even low efficiency there is better than being off the field. Rookie Trestan Ebner was the next back on the field and seems locked into the third spot on Chicago's running back depth chart, but he seems unlikely to contribute this season without an injury.

Herbert is Montgomery's clear handcuff, but he could also see significant playing time depending on how the new coaching staff wants to distribute touches.

Draft Velus Jones Jr. in deep leagues: Jones missed the first preseason game with an undisclosed injury but made his NFL debut Thursday night. The third-round pick played in three-receiver sets with the starters and continued to play once the second team came in. He will probably fall to fourth on Chicago's receiver depth chart once Byron Pringle returns from his quadriceps injury, but he has a decent chance of surpassing Equanimeous St. Brown for the third spot could eventually pass Pringle, too.

There are plenty of rookie wide receivers to take a chance on before Jones, but he has a clear path to playing time, and his quality of play is unknown.

Consider drafting Cole Kmet only if his ADP falls: The Bears tight end missed the Bears' first preseason game but started this one. He was off to a great start with two catches from three targets for 31 yards — both passes went for first downs. On the downside, he didn’t play all nine offensive snaps and only ran a route on five of eight pass plays. The Bears invested in backup tight ends James O’Schnaussey and Ryan Griffin, so they could rotate Kmet out more often compared to past years under the new coaching staff. Offensive coordinator Luke Getsy came from Green Bay, which constantly rotated tight ends. Kmet is typically the 12th tight end picked in fantasy drafts, but he would need to both maintain his past volume while improving significantly as a player to warrant that pick.

Draft Travis Homer in deeper leagues: Both Seahawks backs who were competing for the early-down job missed this game due to injury, allowing Homer to be the every-down back. He was the Seahawks' only offense over the first 20 minutes, recording 46 yards from three carries and one of the team's only two receptions. He played each of the Seahawks' first 12 plays before DeeJay Dallas took over. Homer seems locked in as the Seahawks' third down and two-minute drill back. Seattle’s offense hasn’t looked great, meaning Homer could garner a hefty amount of clear passing game opportunities when on the field. If one of the two Seahawks rushers is injured, Homer would also play some snaps on early downs, which would be enough opportunities to potentially be a fantasy starter in some matchups.

Don’t draft Noah Fant: Fant was part of the Russell Wilson trade this spring. His usage in the first preseason game was worrisome, as he split time with 2020 fourth-round pick Colby Parkinson for the entire first half. Will Dissly missed that game but was back Thursday night to complicate the situation. Both Fant and Dissly started and proceeded to be used interchangeably throughout the first half. Parkinson joined the rotation on the third drive. Fant appears to be on the top of the depth chart, but it would be hard for any tight end to be a consistent fantasy starter with this kind of rotation. It will be even harder with the Seahawks quarterback situation.

Ignore the Seahawks wide receiver snaps tonight: D.K. Metcalf and Tyler Lockett were supposed to not play, but they both played all three snaps on the first drive before leaving for the rest of the game. They are locked in as the starters. Freddie Swain played five of the six snaps on the Seahawks' first two drives, but then his night was done. He’s likely locked into the third receiving spot.