PHOENIX, AZ - OCTOBER 1: George Kittle #85 of the San Francisco 49ers runs after making a reception during the game against the Arizona Cardinals at the University of Phoenix Stadium on October 1, 2017 in Phoenix, Arizona. The Cardinals defeated the 49ers 18-15. (Photo by Michael Zagaris/San Francisco 49ers/Getty Images)

George Kittle helped someone win $1 million in Week 5, and he was only 1.3 percent owned in the DraftKings millionaire maker. You would have been one of the 1.3 percent if you read last week’s breakout candidates article based on points per opportunity data.

If you missed the boat, don’t worry — I’ll again try to highlight some more players in great spots for Week 6. In this article, we attempt to identify some players who are making the most of their opportunities, and some opponents who are giving up a ton of points per opportunity. When the puzzle pieces fit, good things usually happen.

Here is the PPO against data through Week 5: 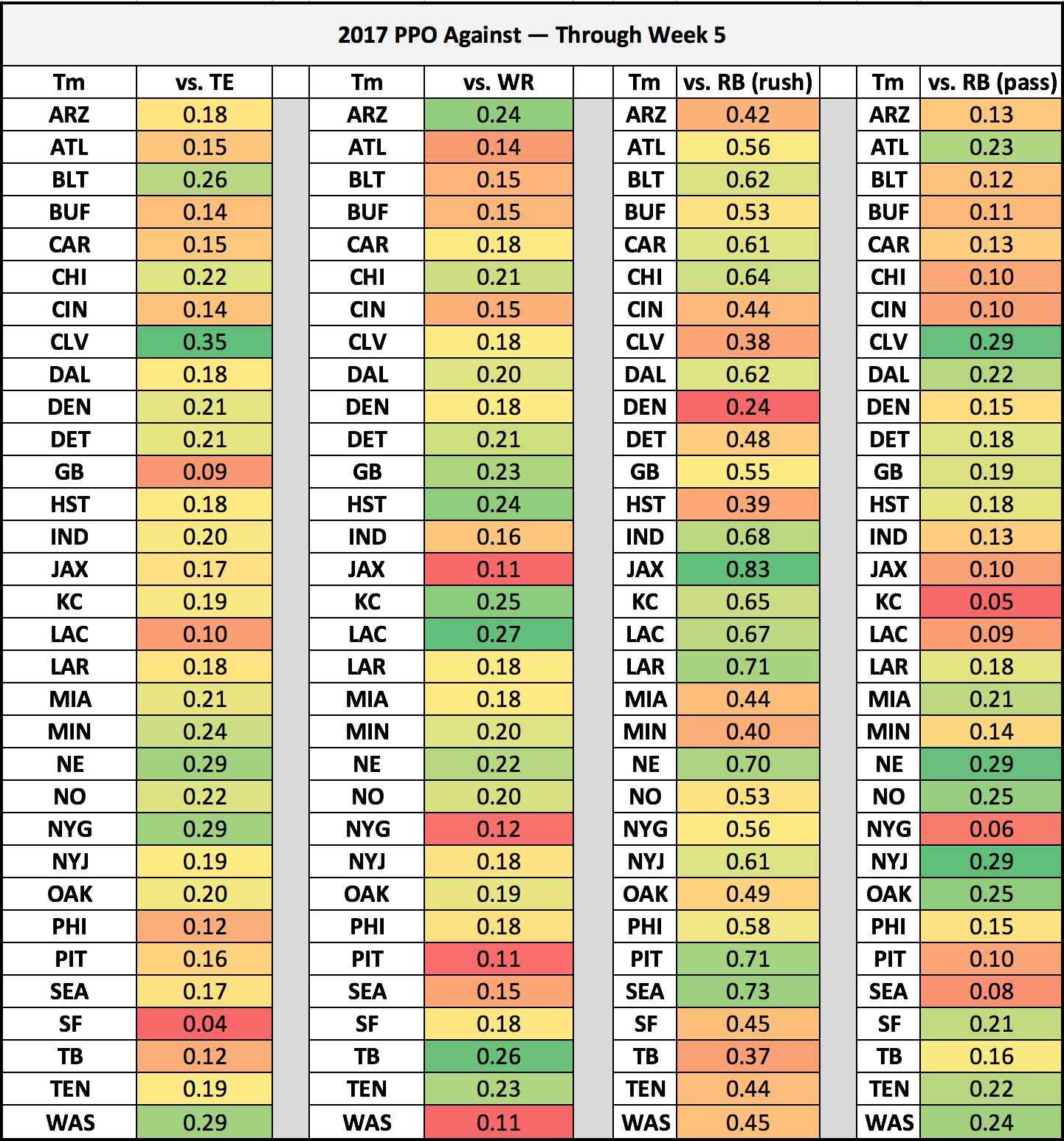 Below some players that are prime to break out in Week 6, according to the PPO data. (To see individual player PPO scores on a weekly or season-long basis, check out the Fantasy Stats section in our Tools lab.)

Elijah McGuire is the third man up for the New York Jets, and it appears he may start in Week 6 against the New England Patriots, who rank fifth-worst in PPO given up to running backs on the ground (0.70) and third-worst through the air (0.29). McGuire has scored 0.46 PPO so far this year, good for 14th-best among qualifying running backs, one spot ahead of Todd Gurley.

Melvin Gordon broke out in Week 5, but he’ll keep it rolling in Week 6 against the Oakland Raiders, who rank fourth-worst in PPO given up on through the air (0.25). Gordon ranks 10th among running backs in targets (25) and has scored a position-leading three touchdowns through the air (tied with Gurley).

I like this as a bounceback game for Carlos Hyde. The Redskins rank sixth-worst in PPO given up to opposing running backs through the air, and Hyde has actually seen a strong 21 targets (5.25 per game) so far this year. Hyde was strangely out-snapped by his backup Matt Breida last week, but Hyde is averaging a healthy 18.4 touches per game and is averaging 4.9 YPC. Don’t write him off yet. There is the worrisome possibility that this backfield is morphing into a timeshare, but let’s see how Hyde fares with this matchup first.

This could be a huge James White week. The Jets have given up the most PPO to enemy backs through the air (0.29 PPO), and White ranks third among all running backs with 33 targets and first with 29 receptions. White has not yet found the end zone, but this could be the week that changes.

Fire up DeSean Jackson against the Arizona Cardinals in Week 6. Arizona has given up the fifth-most fantasy PPO to opposing receivers so far this year (0.24). Jackson has boomed in half of his games with the Bucs, producing lines of 4-84-1 and 5-107-0.

Staying in Arizona for the Bucs-Birds game, John Brown is a candidate to build on his Week 5 game, in which he scored his first touchdown of the season. Brown, Jaron Brown, and J.J. Nelson all saw six targets last week. Larry Fitzgerald paced the group with eight looks. Any one of these players could strike in Week 6, but I like John Brown and his team-leading 18.0-yard average depth of target. Tampa Bay has given up 0.26 PPO to opposing wideouts, second-most in the NFL.

T.Y. Hilton has produced some huge home-road splits, so it’s a bit risky to highlight him for a road game, but the Week 6 tilt against the Tennessee Titans, who have given up the seventh-most PPO to wideouts, is too good to ignore. Hilton has more receptions (17 vs. 16), yards (289 vs. 212) and as many touchdowns (1) as the rest of Indianapolis’ receivers combined.

The Kansas City Chiefs may be undefeated, but their pass defense can be leaky. They have given up the third-most PPO to the position so far this year. This could be a big breakout game for Martavis Bryant, who has struggled to connect with Ben Roethlisberger to begin the year. Bryant does rank tied for fifth in the NFL in deep targets (11), and the duo will connect on a few of them sooner rather than later.

The Chargers have been gashed by wideouts this year and have given up the most PPO to the position. This is a get-right spot for Amari Cooper, who has arguably been the biggest disappointment in the NFL this year.

Be sure to check out our new TE matchup chart

Austin Seferian-Jenkins scored a touchdown last week in a smash spot against the Browns, and he gets another great tight end matchup in Week 6 against the Patriots, who have given up the fourth-most PPO to the position. ASJ has been incredibly efficient in his three games, catching 15 of 18 targets for 106 yards and a score.

The Washington Redskins have quietly given up the third-most PPO to enemy tight ends so far this year. This week the Redskins face last week’s tight end sleeper hero — George Kittle. Kittle has a great chance to repeat his big week.

The Denver Broncos have a generally stout defense across the board, but they have been weakest against tight ends. Denver has given up 0.21 PPO to opposing tight ends so far this year, ninth-most in the NFL. Evan Engram gets the Broncos this week, and he’s one of the New York Giants’ only pass-catchers left. (Note: This is a pretty risky situation. If Engram is used as a wideout due to New York’s injuries, his matchup is much less enticing.)