Just because the NFL regular season is over doesn’t mean the fantasy football action has to end. Postseason fantasy football is a great way to get another month of your fantasy fix or a chance for redemption if the 2019 season didn’t quite go your way.

Of course, fantasy football playoff leagues come in a variety of formats. The three most common are salary cap, one-and-done, and traditional draft. Regardless of which your league uses, the idea remains the same – pick the players who are going to score the most points.

In draft-style leagues, this task is much easier in the regular season. Barring any injuries or suspensions, all players play the same amount of games. But in the playoffs, as teams are eliminated, you lose those players. The key here is to draft not just quality players, but quality players on teams that have the best chance to play multiple games and hopefully advance to the Super Bowl.

To determine which teams you think will advance, I suggest drawing up a bracket and make your picks just as you would for the NCAA Men’s Basketball Tournament. When mapping out your picks, remember that Vegas is your friend. Here are the current odds to win the Super Bowl:

The Ravens are the clear-cut favorites, with an implied probability of 30.8% to win the Super Bowl. Buffalo and Tennessee bring up the rear this year. At 50/1, both teams have just a 2% chance of winning the big game.

Of course, for fantasy football playoff leagues, winning the Super Bowl isn’t as important as making it to the Super Bowl. Our goal is to target players who are going to play the most games. Here we can again use implied probability to our advantage.

You can certainly take Vegas at their word and use these probabilities to map out your playoff bracket. However, that approach will have you ending up with an extremely chalky set of picks. While the better team often wins in the NFL, it’s a big long shot that top-seeded team wins every game in the playoffs. So have some fun and pick the teams you think are going to win. Here’s how I see things unfolding: 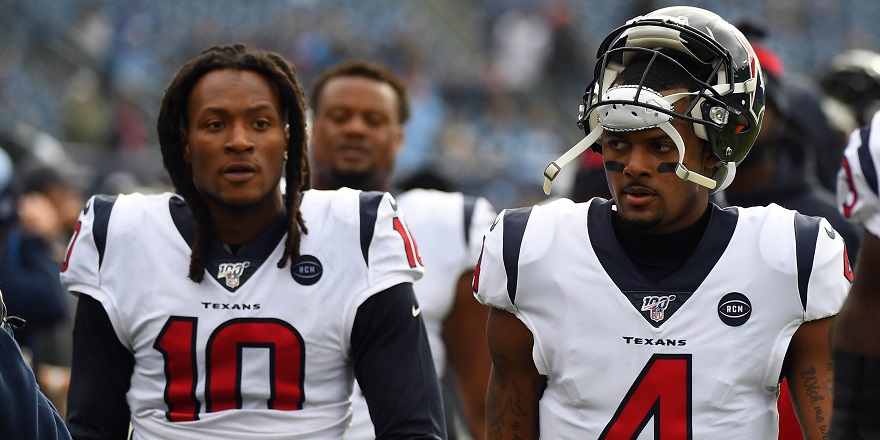 The Bills have had a heck of a run this season, but it’s a tall task to have to go on the road and win in the playoffs with a young and inexperienced team. Of course, this result does assume that the Texans have the trio of Deshaun Watson, DeAndre Hopkins, and Will Fuller back on the field.

Mike Vrabel has a chance to get that sweet revenge against his former team, but expect Bill Belichick to have a plan in place to neutralize the league rushing champ Derrick Henry. Remember, the Pats are also quite familiar with Ryan Tannehill, having faced him twice per year when he was with the Dolphins. New England’s lackluster offense will score just enough to get them by the Titans.

Don’t expect the Minneapolis Miracle Part 2 in this one, as these are very different teams than the ones that faced each other back in January of 2018. New Orleans may not be loaded with weapons, but their top talent is elite in Michael Thomas and Alvin Kamara. Drew Brees should have no problem exploiting the Vikings secondary. Of course, key to a win for the Saints is containing Dalvin Cook and the potent Vikings run game.

We have two teams decimated by injuries in this contest. The Seahawks lost their entire backfield over the last month of the season, and the Eagles can seem to keep their pass catchers healthy along with Miles Sanders dealing with an ankle injury. Seattle had just enough to hold off Philly in their regular season meeting despite poor conditionals that led to a lackluster day for Russell Wilson and the Seahawks passing game.

Lamar Jackson and company enter the playoffs as the favorite to win the title. The Ravens run game comes at you from all angles, and the team has been lights out in the red zone. This is a tall task for the Texans.

In a matchup of two of the best coaches of the last 20 years, the Chiefs get the slight edge. Let’s be clear that it’s never a pushover to face the Pats in January, but the Chiefs offensive firepower will be too much even for the stellar New England defense.

The Packers may have had the quietest 13-3 season in NFL history. Despite not having the offensive weapons they’ve had in recent seasons, Green Bay should put up a fight at home. However, it’s tough not to like the Saints in this one, especially because of their potent one-two punch in the backfield with Alvin Kamara and Latavius Murray.

Round 3 this season goes to the winner of the second matchup. If the Seahawks were fully healthy, it’d be a much tougher game to pick. But as Week 17 showed us, they didn’t quite have enough to get by San Francisco. The impressive season for Kyle Shanahan and company continues.

The first meeting between these two teams proved to be one of the most entertaining of the season with a massive 94 combined points scored. The 49ers pulled out a win in that one, but we’re going in the opposite direction and picking the Saints to get the win and play the coveted four-game playoff schedule.

Sure, we could go with the chalk here, but you can’t win your fantasy football playoff leagues by picking the same winners as everyone else. Kansas City struggles against the run, so this one could be a bit of a stretch. But we’re going to roll with it and pick Andy Reid to finally get back to the Super Bowl. 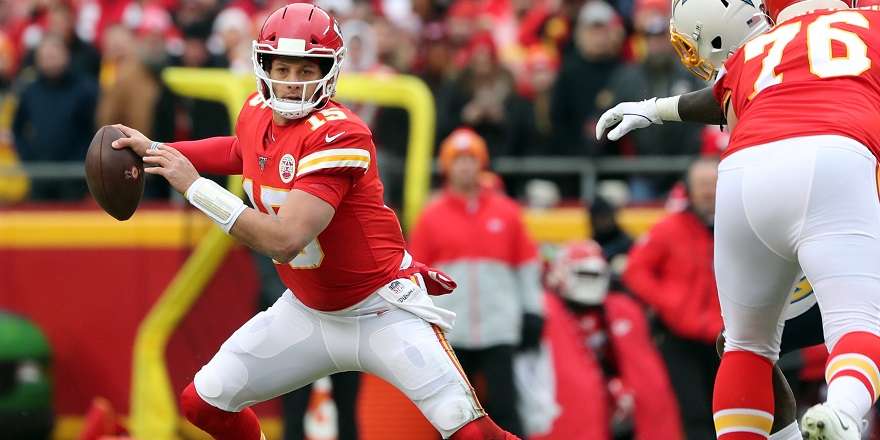 Patrick Mahomes battle multiple injuries this season, but that will all be an afterthought. The young quarterback cements his name atop the list of the top quarterbacks of the new generation and begins his march toward G.O.A.T. status.

While it’s very easy to simply leave things like this, I’d strongly advise against it. Using full games, we’ll end up with a set of rankings that is heavily weighted toward the three-game teams. And the reality is that the teams that we pick to lose don’t have a 0% chance to win.

So given the numbers I ran in my model, these percentages can be converted to the following games played:

With these projected games, we can now put together fantasy football playoff rankings. Here's my draft board along with some additional thoughts on strategy.

Fantasy football playoff leagues have a lot of differences from regular season leagues. One of the big ones is that you can’t wait at quarterback. You don’t want to be stuck with someone like Kirk Cousins this year, so It’s important to nail your quarterback selections early. You’ll notice three signal-callers in this top tier of names with Jackson topping the list. Prioritize getting one of the quarterbacks who you think will make it to the Super Bowl in the first round.

Try to get the most bang for your buck in this range. Even if you don’t think a team will play more than one game, players like Jones and Henry have good value in this range. And there’s always the chance you’re wrong on your game picks.

The 49ers are tricky in this draft. While they’re in a good position to potentially play three games, the regular season taught us that we can’t necessarily set our watch by any of their skill position players with the exception of George Kittle. That said, the team did show us at various points this year that they can point points on the board.

If you miss out on the first four quarterbacks, this is a good range to grab two. Wilson and Brady don’t look like great bets to face each other in the big dance. However, if they do, you’ll get four games out of each. That would make it very tough for you to not win your league.

Unlike in regular season leagues, you don’t want to wait to grab your kicker and defense. Again, you’ll want to lean heavily on your bracket picks and draft the kickers and defenses you project play the most games. Wil Lutz will likely be the first kicker off the board with the Saints defense likely being picked in the same range. 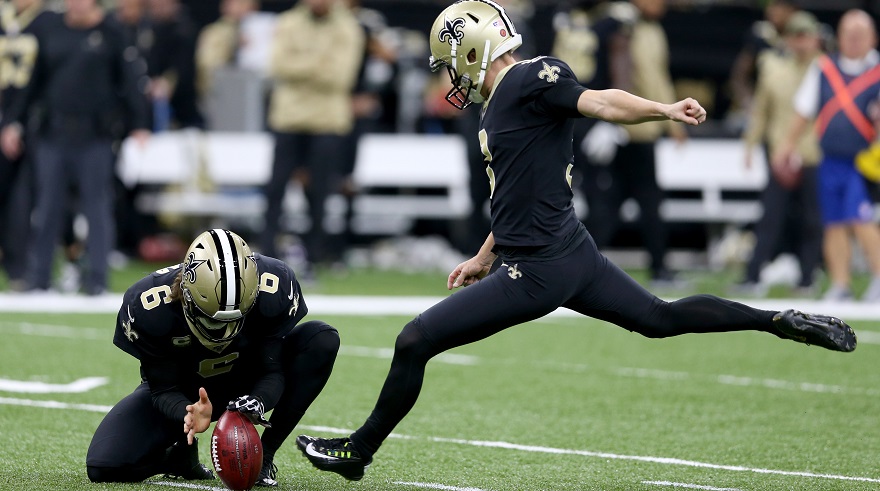 From this point forward continue to load up on the teams you think will go the furthest, and don’t be bashful. This means picking guys deep down the depth chart. So players like Tre’Quan Smith or Gus Edwards very intriguing in the later rounds if you happened to load up on the Saints or Ravens.