Leverage PFF’s Week 12 fantasy football rankings and DFS ownership projections as close to lock as possible. Knowing what your competitors are going to do ahead of time provides an edge that simply not enough DFS gamers take advantage of. Focus your attention in cash formats on high-rostered value players and pivot to lower-rostered ceiling players in GPPs. And, as always, leverage late swaps before the late afternoon games kick-off.

And as a special holiday treat, I’ve also included data graphs and analysis for the three-game DFS slate to keep you all entertained on Thanksgiving!

The quarterback position shouldn't be a hot topic debate on the Thanksgiving slate. The Dallas Cowboys–Las Vegas Raiders game has 50.5-point projected total, making it the most likely to be a shootout.

Dak Prescott ($6,900) is primed to bounce back in the dome after a severely disappointing outing in Week 11, where he scored just 5.6 fantasy points. Woof. Derek Carr ($6,900) should be able to do enough versus Dallas’ defense to help push Prescott to an above-average fantasy performance.

Josh Allen ($7,900) also has a great matchup against the New Orleans Saints, who have allowed the most fantasy points to quarterbacks over the last four weeks. If you can find enough space to roster Allen, do it. 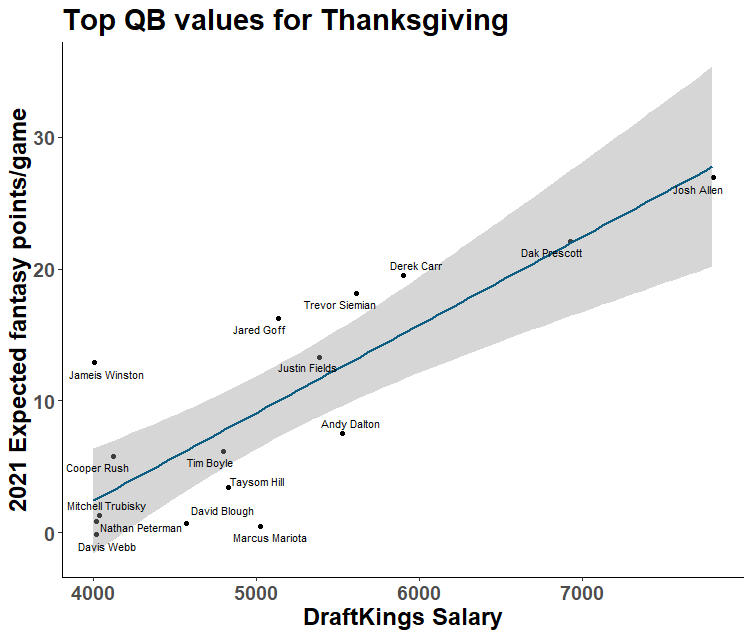 Running back starts with David Montgomery ($6,000). The Bears' three-down workhorse had his best fantasy outing back in Week 4 against these same lowly Detroit Lions — 25.6 fantasy points — so there’s no reason to try to avoid him. Detroit ranks fourth in rushing yards allowed to running backs this season.

Swift is the best cash game option based on his recent workload, cost value and elite dual-threat ability as a receiver/rusher.

Kamara is the best option for tournaments solely because there will be major questions about his availability and workload during his return from injury. If he and Mark Ingram cannot go, prepare Tony Jones Jr. as a free square.

I settled on Ezekiel Elliott as my favorite in GPPs because he's the RB1 in Dallas and set to smash a poor Raiders run defense. Las Vegas has allowed the third-most fantasy points to running backs over the last two weeks.

Despite playing banged up in Week 11, Elliott still operated as the primary pass-catcher, running a route on 68% of Dak Prescott’s dropbacks. Routes run at the running back position separate the elite running backs from the great ones, as Christian McCaffrey, Jonathan Taylor and Austin Ekeler all smashed in Week 11 because of their three-down workhorse roles. Running backs with such highly coveted roles just can’t miss. 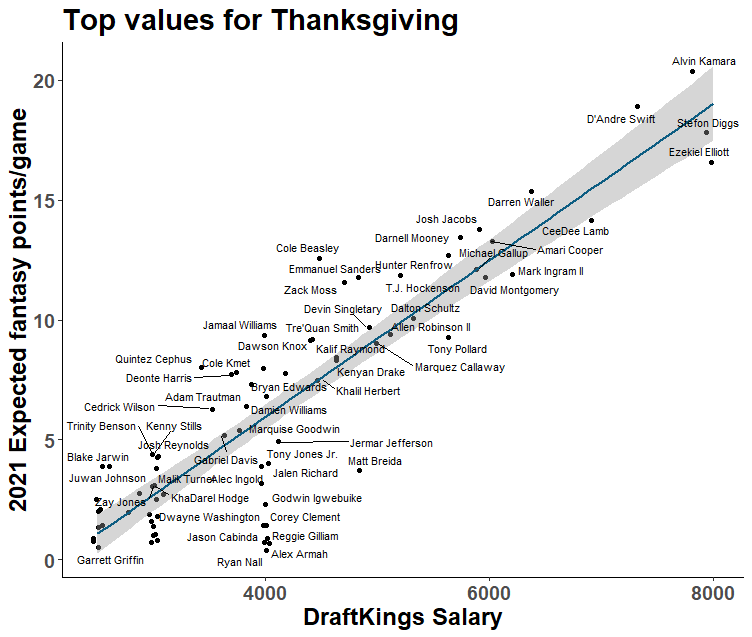 The best approach in large-field GPPs would be to fade all the pricey RBs and roster Josh Jacobs ($5,900). His role is evolving as a receiver, as he's caught at least three passes in five of his last six games. The Raiders running back owns a 28% target rate per route run over the last four weeks, which ranks ninth among all players with at least 15 targets.

Zack Moss will be played by virtually no one. But we know he has multi-touchdown upside playing in a high-flying offense. It only takes the Bills playing with a lead and a few plays at the 1-yard line for Moss to provide slate-breaking value at $4,700.

Just be aware that Moss is super fringy with the coaches talking up Matt Breida. To play it safe, bet the under on any Bills running back rushing props.

In the last 2 Games Breida has

My only takeaway from past Thanksgiving slates is to target the less popular wide receiver on a team that likes to spread the ball around. And in most cases, that’s the most expensive receiver, as ambiguity tends to guide DFS gamers to the better value option.