Metrics that Matter: WR Rating based on who's throwing the ball

In our last article, we examined the top- and bottom-10 wide receivers by WR Rating, a metric that measures a team’s passer rating when targeting a particular wide receiver. I wanted to spend some more time with it today after noticing that there was a strong correlation between WR Rating and team passer rating.

So, in today’s article, I wanted to answer that question and look at the most efficient wide receivers on a per-target basis relative to the efficiency of the quarterbacks targeting them. To determine this, we built out an expected WR rating based on the average passer rating of each passer to target them (on each target) and contrasted this with a wide receiver’s actual WR Rating, to create a differential. 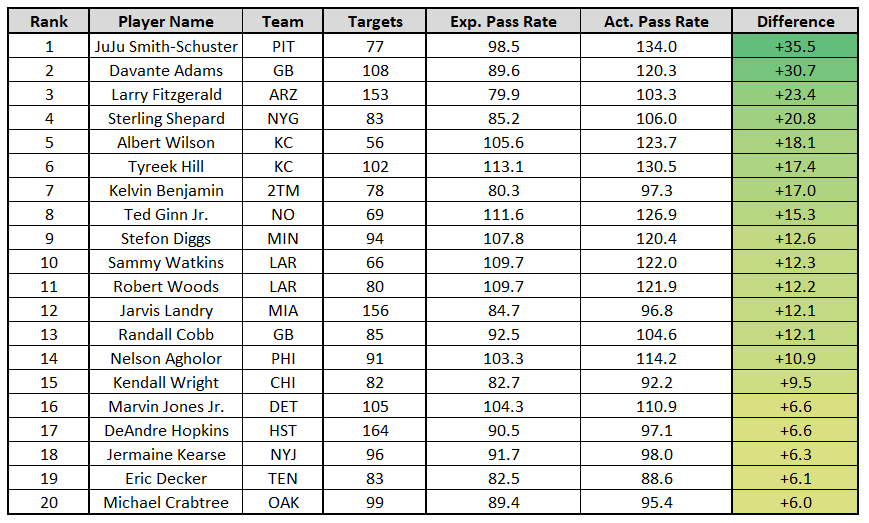 Smith-Schuster ranked first in adjusted WR Rating, posting the fifth-best season (min. 50 targets) by a wide receiver since 2007. These numbers may be slightly skewed by a 97-yard touchdown catch (the longest play of the year) and these numbers might be so good that they indicate a looming regression, but I’m still very confident he beats his current ADP (WR39). Smith-Schuster also ranked top-10 in yards per route run and ranked highly in depth-adjusted yards per target (another metric we’ll soon highlight in this series).

To answer our initial question, Adams’ season by adjusted-WR Rating was indeed superior to Hill’s. His +30.7 differential actually ranks 10th-best by any wide receiver of the PFF era (since 2007). Fellow wide receiver Randall Cobb also ranked within the top-20, while Jordy Nelson (the PFF-era leader in WR Rating) ranked bottom-20 for the first time in his career. Perhaps this played a role in his departure, but in either case both Adams and Cobb appear to be strong ADP values assuming more available targets and a healthy return of Aaron Rodgers.

Fitzgerald had the third-worst expected WR Rating of all wide receivers with at least 75 targets last season, but still ranked 17th in actual WR Rating. Although we’ve been waiting for Fitzgerald to hit a wall for years, that day may never come before his retirement. Fitzgerald turns 35 this season and ranks fourth among wide receivers in PPR fantasy points over the past three years. If Sam Bradford stays healthy (a big if), all Arizona receivers should be better off than they were last year with Carson Palmer, Blaine Gabbert, and Drew Stanton, but perhaps especially so for Fitzgerald.

Shepard had something of a breakout year last season. Excluding one game he left early with an injury, Shepard averaged 15.8 PPR fantasy points per game across his final eight games, which would have ranked ninth-best if over a full season. Of course, this production and the ranking here were likely related to the fact that New York’s receiving corps was decimated by injuries (Odell Beckham Jr., Brandon Marshall, and Dwayne Harris) causing him to look far better with the replacements playing so poorly, but regardless it’s encouraging for Shepard’s prospects in year three.

Benjamin’s ranking here was something of a surprise considering just how underwhelming he was from a fantasy perspective. In defense of his poor fantasy numbers, he was also playing with a minor knee injury since Week 3 and with a torn meniscus since Week 11. His expected WR Rating ranked ninth-worst last season, but there’s little reason to suspect that improves when Buffalo’s starting quarterback will be someone inexperienced (AJ McCarron, Nathan Peterman, or a rookie)

Hopkins ranked top-20 in adjusted WR Rating this year, which should come as no surprise to us. Hopkins has a long history of overcoming atrocious quarterback play to post elite numbers. Hopefully, Deshaun Watson (103.0 passer rating) stays healthy and Hopkins won’t have that problem this year. He led the position in fantasy points per game prior to Watson’s season-ending injury, and then still finished second at the end of the year, despite drawing the majority (57 percent) of his total targets from Tom Savage (71.4) and T.J. Yates (65.8).

Additional notes: In the case of some of the other wide receivers we highlighted Saturday (who ranked top-10 in raw WR Rating), Albert Wilson, Tyreek Hill, Ted Ginn Jr., Stefon Diggs, Sammy Watkins, Robert Woods, and Nelson Agholor, it appears they weren’t just lifted to elite heights on the back of their quarterbacks, they were still fantastic even relative to top quarterback play. 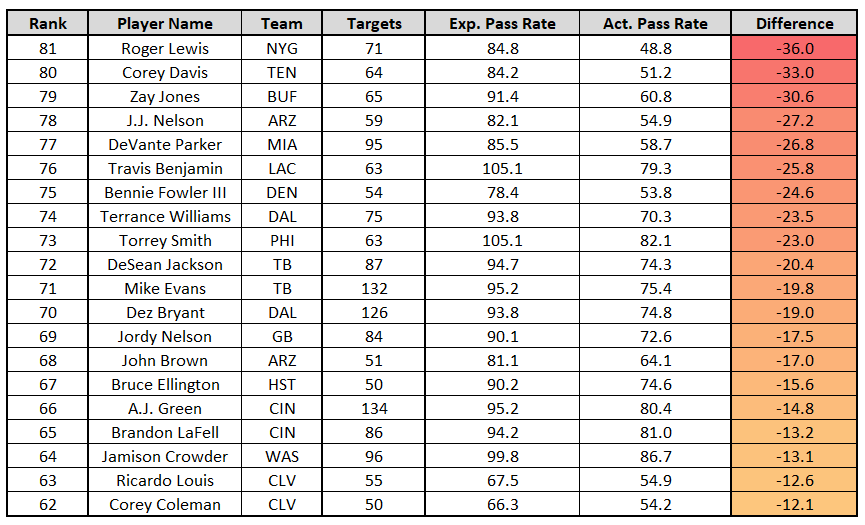 For the most part, a lot of the same names that ranked bottom-10 in raw WR Rating also ranked bottom-20 here. In order to not repeat our analysis from our last article, I’ll focus on some of the other names.

Evans and Jackson both ranked bottom-12 in adjusted WR Rating, but I’m hesitant to put the blame entirely on them. Instead, I think this speaks to something I’ve mentioned before with Jameis Winston. Mainly, he’s just never been very efficient when targeting wide receivers.

I led the charge against Bryant’s ADP last season, highlighting metrics suggesting a decline and warning of a brutal cornerback schedule, but even I didn’t expect Bryant’s numbers to be as poor as they were. Bryant saw impressive volume last year, but was atrocious relative to it, ranking third-worst among wide receivers in points left on the table (actual fantasy points vs. expected fantasy points). At age 29, he should have a few more years left in the NFL, but his ranking here (and speed decline) are especially worrisome. His decreased ADP (now WR23) means he’s still very draftable, and there isn’t much competition for targets in Dallas, but know he’ll be a boom-or-bust pick this year.

Crowder ranked 20th-best by this metric in 2016, but 18th-worst in 2017. It’s hard to say which version of Crowder we might see this year. Running back Chris Thompson may cut into volume after outperforming him last season in a similar low-aDOT underneath role. Prior to Thompson’s Week 11 injury, Crowder saw 58 targets to Thompson’s 51 (both leading the team). Thompson totaled 257 more yards after the catch than Crowder, with a league-leading 363. Thompson’s passer rating when targeted (125.5) was also far superior to Crowder’s 66.7. It’s also hard to determine what the quarterback change and addition of Paul Richardson means for Crowder. I’ll likely split the difference in my projections, coming up with something in between his 2016 and 2017 numbers.