Is there room for even more fantasy growth from JuJu Smith-Schuster?

Antonio Brown is inarguably one of the greatest wide receivers to ever play football (or fantasy football). Since 2013, Brown totals 9,145 yards — the most receiving yards by any player through any six-year stretch in NFL history. Over this span, he’s ranked second, first, first, first, first, and fifth at the position in fantasy points scored.

JuJu Smith-Schuster is inarguably one of the NFL’s most exciting and promising young wide receivers. He turns just 23 in November and has totaled 494.6 fantasy points across his 30-game career. For perspective, only Randy Moss has totaled more fantasy points before turning 23 ever, and Larry Fitzgerald ranks right behind Smith-Schuster. As far as elite company goes, it might not get any more impressive than that. (Earlier this offseason, I explained why age-adjusted numbers are so important for wide receivers.) 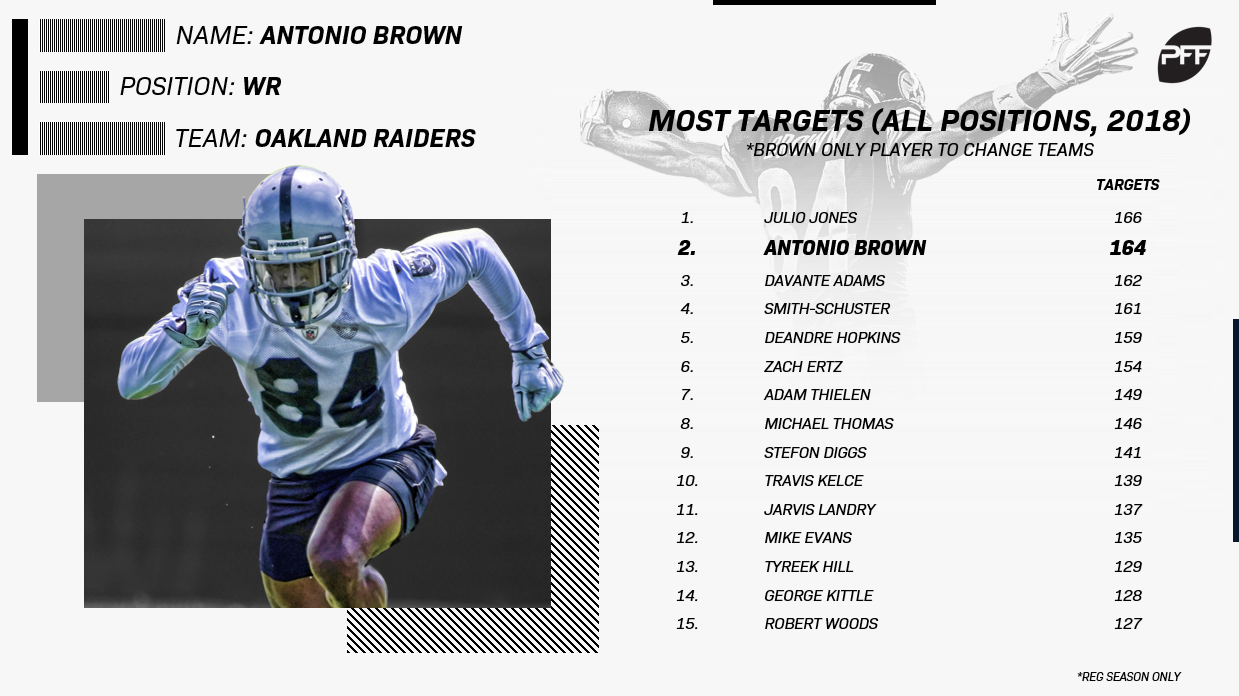 As you well know, Brown is now in Oakland and Pittsburgh has replaced his 168 targets with only Donte Moncrief and a third-round rookie (Diontae Johnson).

The Steelers are losing one of the greatest wide receivers of all-time, and Smith-Schuster will now receive the opportunity of a lifetime, sliding into Brown’s now-vacated role as the team’s unquestioned WR1.

What does this mean for Smith-Schuster’s fantasy potential in 2019? Are there any historical examples we can turn to in an effort to gauge the impact of Brown’s departure? 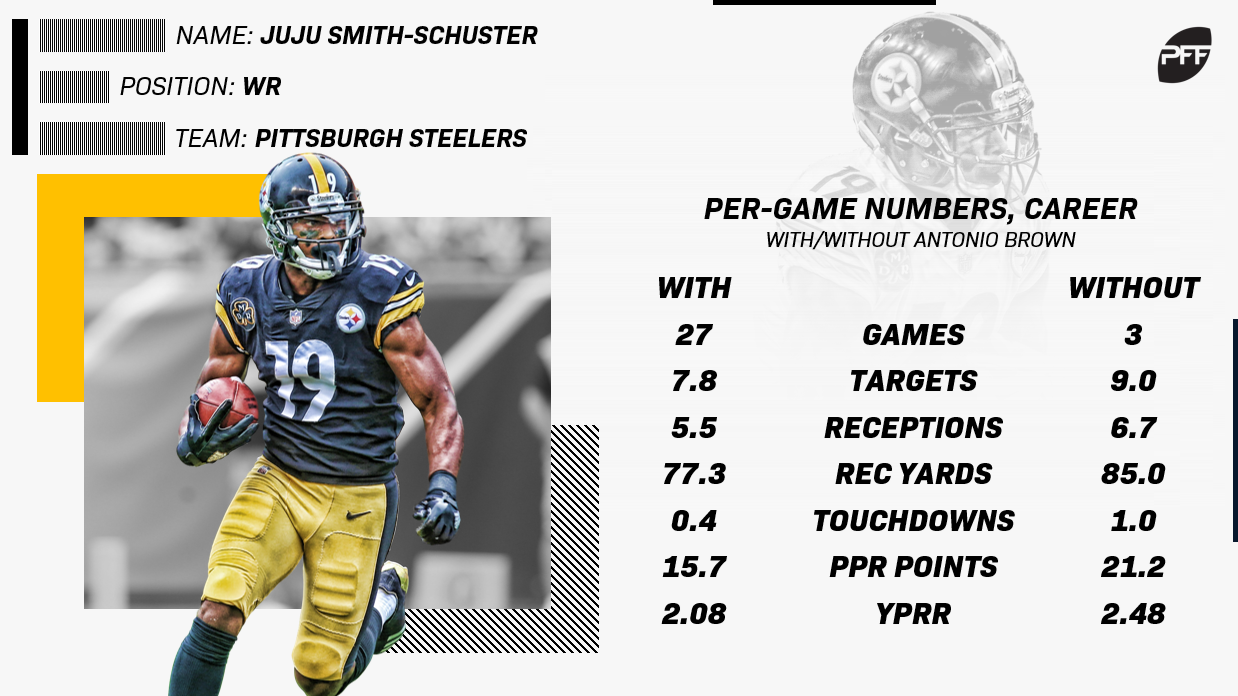 Over the past 15 seasons there are really only three examples of a team losing a Hall of Fame-level talent a year after they led the team in targets and then passing the torch to a young WR2 with a pedigree about as promising as Smith-Schuster’s.

All of this seems encouraging to Smith-Schuster, but this is still mostly an unprecedented event and one to view within a vacuum, and there are other reasons to be skeptical. Mainly, it’s hard to imagine Smith-Schuster sees much better volume in 2019, considering he already ranked fourth in targets last year (166). Further, any increase in volume could be offset by more defensive attention and a tougher cornerback schedule.

Last season, Brown ran 51% of his routes lined up against top-35-graded cornerbacks, which ranked third-most of 121 qualifying receivers. That number sat at just 24% for Smith-Schuster, which ranked 57th. If Smith-Schuster remains in the slot (where he ran 62% of his routes last season), he should be safe, but if moved outside we should expect a much tougher cornerback schedule and worse efficiency.

Or maybe Smith-Schuster is so good that it just doesn’t matter. Brown has missed three games over the past two seasons. Over that span, Smith-Schuster averages 9.0 targets and 21.2 fantasy points per game while running just 33% of his routes from the slot.

As I said before, it’s hard to imagine Smith-Schuster sees much more volume in 2019, though he really doesn’t need much more to be worthy of a borderline first-round pick. Smith-Schuster finished eighth in fantasy points scored last season and was only 40.9 fantasy points off the league lead. By fantasy points per target, he would have only needed 21 more targets to claim No. 1. That sort of jump in target volume might not be likely, but it’s certainly not impossible, as Hopkins’ 2015 season proved.

Target-volume isn’t everything, either. Brown also saw tremendous usage near the end zone last year, leading the league in expected touchdowns (11.2) and end zone targets (23). A significant bulk of that volume should go to Smith-Schuster.

Our data suggest Smith-Schuster is likely to see an increase in volume but a decrease in efficiency in 2019. The question is, will the volume be enough to offset the decline in efficiency? I think so, and maybe enough for him to put up Brown-like numbers.

Over the past two seasons, Ben Roethlisberger has actually been far more efficient when targeting Smith-Schuster (110.6 passer rating) than Brown (95.5). Smith-Schuster already came close to eclipsing Brown for WR1 status last year, averaging just 0.8 fewer targets per game. Keep in mind, Smith-Schuster is incredibly young (younger than some of the rookie wide receivers drafted this year) and is just now entering his athletic prime. Typically, wide receivers fall well short of their career baseline average during their first two seasons in the league, and then hit their peak year in Year 3.

If Smith-Schuster really is as good as his rookie and sophomore seasons imply, he might not see any dropoff in efficiency, and really might be worthy of a Hopkins-like jump in volume.

In dynasty leagues, there’s no wide receiver I’d rather own. All four wide receivers typically being drafted ahead of him are at least four years older.

But where exactly should we be trying to draft JuJu Smith-Schuster in 2019 redraft leagues? Does he rank above or below Antonio Brown? All of these questions can be answered using our PFF Fantasy staff rankings, available to PFF Edge and Elite subscribers.