It’s Wednesday, and that means it’s time to start making your start and sit decisions for your fantasy football lineups. One of the best resources to help you is our flex fantasy football rankings for Week 7 of the NFL season. Remember that rankings change throughout the week, so be sure to check our staff rankings for updates.

3. Melvin Gordon, LAC vs TEN (RB3) — The heavy volume continues for Gordon. He's locked in as a top-end RB1.

4. Kareem Hunt, KC vs CIN (RB4) — Kansas City firing on all cylinders has really opened things up for Hunt.

6. Tyreek Hill, KC vs CIN (WR2) — Hill has the highest fantasy weekly ceiling among wide receivers and could put on another show Sunday night.

7. Ezekiel Elliott, DAL @ WAS (RB5) — No player has seen a larger touch share this season.

9. David Johnson, ARI vs DEN (RB7) — He's heating up and managed to produce a solid fantasy day despite his team being dominated last week.

10. Julio Jones, ATL vs NYG (WR3) — Over 700 receiving yards and no touchdowns, but it doesn't matter. You start Jones every week.

12. Alvin Kamara, NO @ BAL (RB8) — This is a tough matchup for Kamara, but his upside keeps him in the RB1 conversation.

13. Michael Thomas, NO @ BAL (WR5) — The Saints get a tough draw following their bye, but Thomas is an every-week fantasy WR1 regardless of his opponent.

14. James White, NE @ CHI (RB9) — He doesn't touch the ball much as a runner, but White's involvement in the passing game keeps him on the fringes of RB1 territory.

24. Christian McCaffrey, CAR @ PHI (RB10) — His rushing volume is down, but McCaffrey is so dangerous as a receiver. 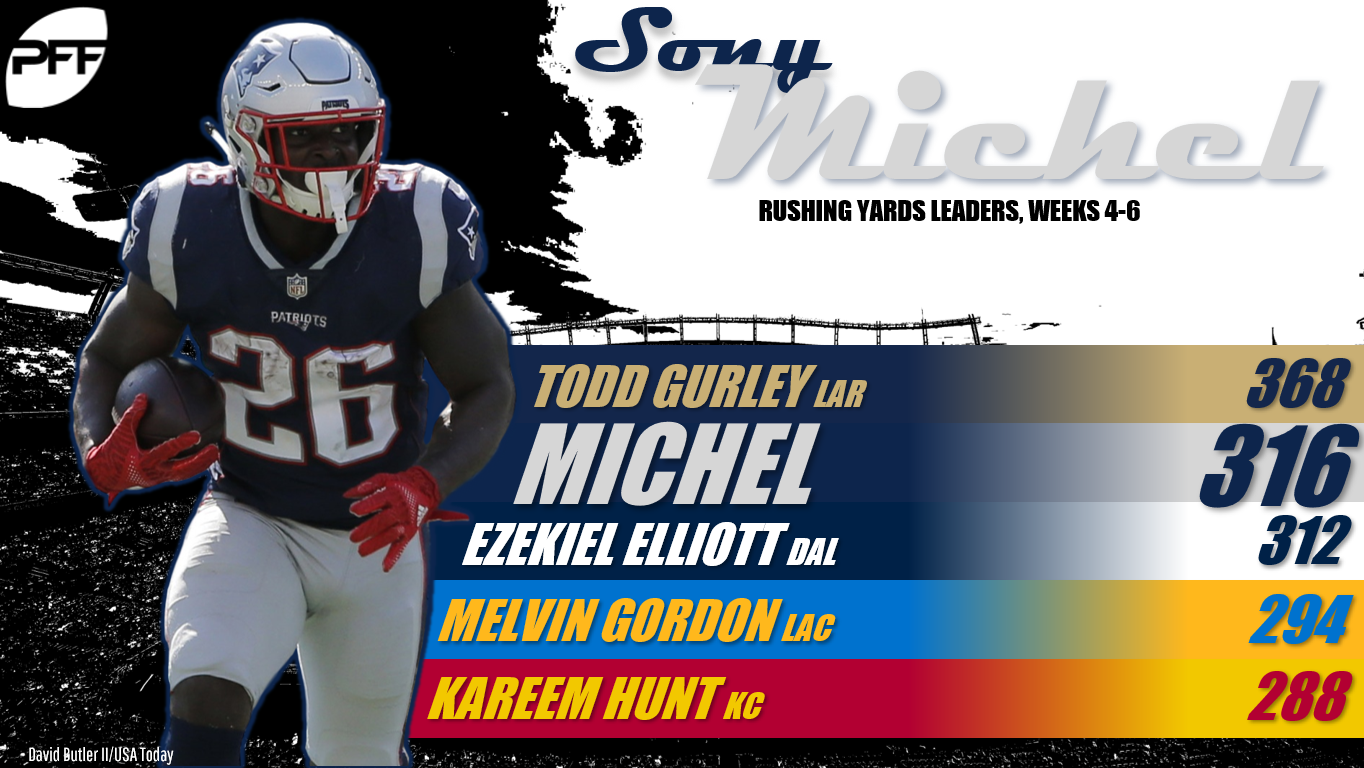 41. Tevin Coleman, ATL vs NYG (RB18) — Devonta Freeman is now on injured reserve, but it's tough to trust Coleman as anything more than an RB2 with the committee in the Falcons backfield.

48. Tarik Cohen, CHI vs NE (RB21) — Cohen will be gamescript-dependent going forward, but he's in play as an RB2 against the Pats.

58. Peyton Barber, TB vs CLE (RB26) — Barber is the Bucs lead back, but it's still tough to trust him as anything more than a flex. 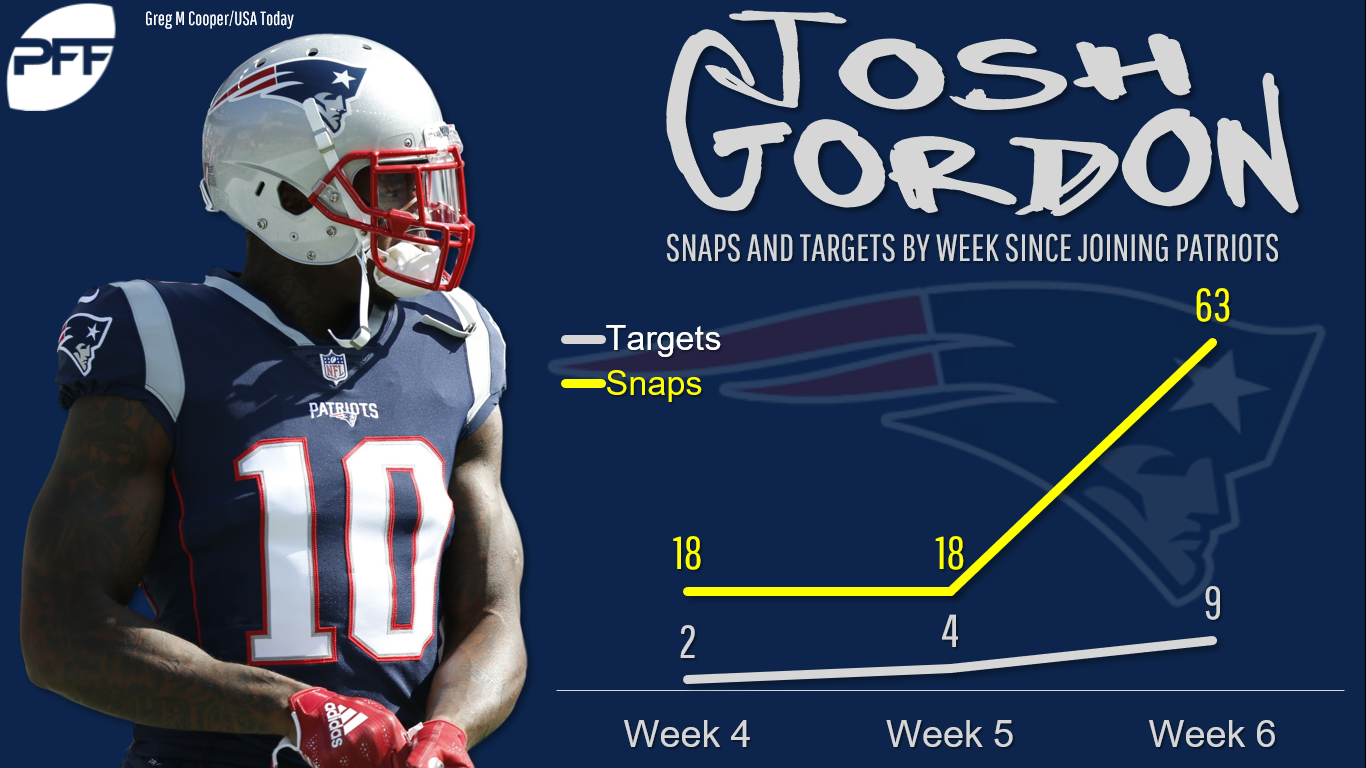 74. Chris Godwin, TB vs CLE (WR35) — Keep in mind that Godwin has consistently been the Bucs No. 4 wideout in terms of routes run this season. 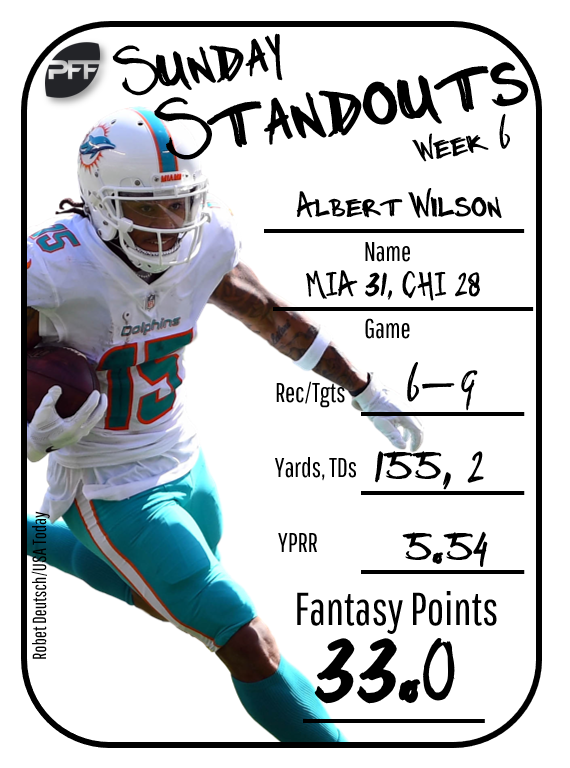 81. Albert Wilson, MIA vs DET (WR38) — Wilson was amazing last week, but his role in the Miami offense is very volatile for fantasy purposes. 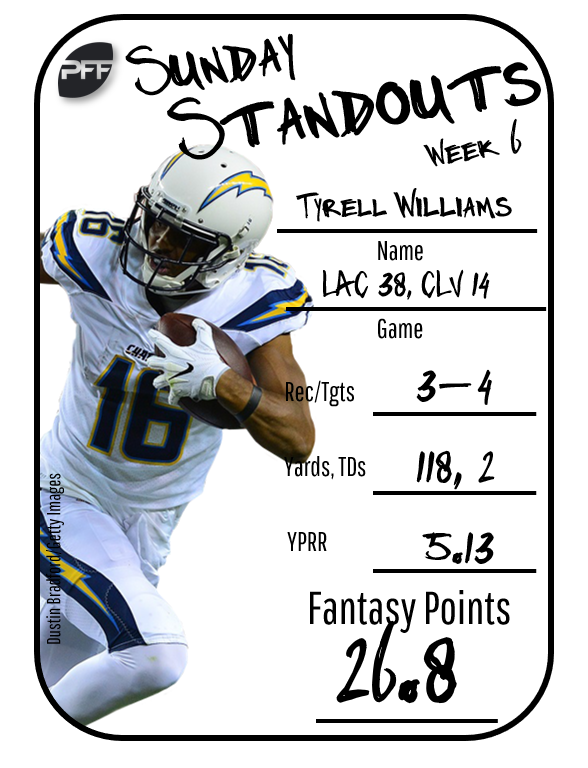 124. Derrick Henry, TEN vs LAC (RB45) — With the Titans offense struggling, it's nearly impossible to start Henry this week.

(READ MORE: Pat Thorman puts the Week 7 games under the microscope from a pace perspective, while Scott Barrett identifies the players performing the most above and below expectations based on workload.)